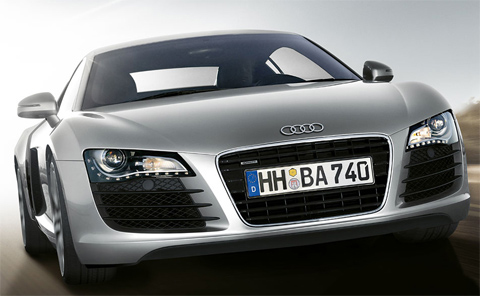 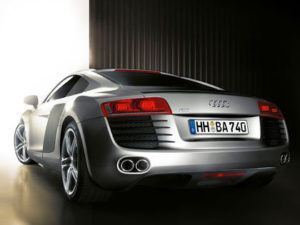 The race-bred (‘R’ stands for Racing) R8 coupe is built on a light-weight aluminium space-frame, and brings together much ground-braking technology, borrowing a lot from the Lamborghini Galardo, which also, like Audi, is part of the VW empire. The design is based on various Audi successes at the Le Mans 24 hour sports car race. The competition, in the show room where it counts, is formidable, including the Porsche Carrera, Aston Martin V8 Vantage, BMW 650i, Maserati Gransport, Mercedes SL500, and Jaguar XK-R

The R8’s six-speed automatic gearbox uses “shift-by-wire” to provide exceptionally rapid gear changes. The “magnetic ride” suspension system uses a fluid containing minute magnetic particles for inducing lightening-fast changes to the front and rear double wishbone suspension, which absorbs bumps and flattens out the ride much quicker than conventional methods. An electronically controlled rear spoiler deploys when the car’s computer detects that composure at higher speeds would benefit from more down-force. Other supercars merely deploy spoilers when higher speeds are reached. And when you override the automatic gearbox to change down manually, the computer will induce a little blip of the engine to make your driving sound more professional.

Hostage to fortune
The R8 is powered by a 4.2 litre V8 direct injection petrol engine which develops 420 bhp and slingshots the car from rest to 62 mph-100 km/h in 4.6 seconds, and on to a 187 mph-300 km/h top speed. Audi, in its wisdom, has decided to dispense with the usual claim that a computerised monitor limits the top-speed to 155 mph-250 km/h. That might turn out to be a hostage to fortune when the environmentalists find out. 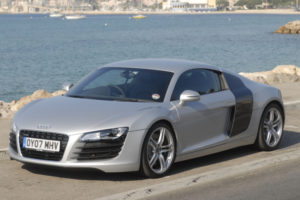 The engine, which spins to 8,250 revolutions per minute, is mounted behind the front seats. This provides what Audi says is a near perfect 44 per cent front/56 per cent rear weight distribution for optimum handling balance. If you ever wonder exactly where the engine is, Audi has thoughtfully provided a glass, see-through cover which lights up at night. Handling, as far as this amateur driver can tell, is exemplary, as the car hugs the ground and the steering simply points the car where you want it to go. Audi provided a professional race-driver to show us lightweights what was possible on the Paul Ricard track at Le Castellet. The road going version with normal tyres and brakes simply stuck to the track like glue, and went as fast as you’d expect.

Nether regions
The build quality is top flight, with terrifically tight panel gaps. The interior is typically sombre, but exceptional quality and attention to detail is everywhere. There are carbon fibre door pulls; sports seats hug your nether regions

This phenomenal performance comes at breathtaking prices. The base manual model costs £76,825-€113,000. The automatic gearbox with shift-by-wire adds £5,200-€7,600. The waiting list is long, according to Audi, so that means that at least, residual prices will remain strong. Global sales are expected to be around 3,000 a year. Audi insists that the R8 provides a broad set of superlatives – the most powerful engine in its class, with the highest revving engine, highest maximum speed, best acceleration, and best power to weight ratio. Cheekily, perhaps sensing that these attributes will not please environmentalists and politicians seeking to curb automotive carbon dioxide emissions, Audi talks of the engine’s “high economy”. The average fuel consumption for the manual version is claimed to be 19.3 mpg-14.6 litres per 100 kilometres. Don’t expect to get much more than 15 mpg-19 l/km. And I don’t expect environmentalists like George Monbiot or Jonathan Porritt to be hurrying along to their local Audi dealer.

Sandalistas
This is the kind of car which will induce much teeth grinding by Sandalistas, and the exhalation of much hot air about planet killing.

Meanwhile, back among the petrol-heads, the R8’s handling is exemplary thanks to its four-wheel drive, wide stance, and low centre of gravity, says Audi.

It has every known electronic aid for stability and traction control to kick in if dangerous limits are approached. The car’s low profile produces minimal wind resistance and the front and rear double wishbone suspension, aided by “magnetic ride”, makes for quiet, comfortable progress. 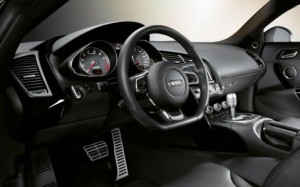 All superlatives aside, it is the car’s sleek, futuristic looks which make it such a notable presence on the road, exaggerated by the dazzling LED day-time running lights and brake lights. On the highways and byways around Le Castellet, 15 kilometres inland from the Mediterranean naval port city of Toulon in the heart of Provence where the car was launched to the media, other motorists were pointing and taking pictures.

Bowling bag
But nothing is perfect. It’s hard to see out of the back. Make sure you car has radar reversing. The weird-shaped boot, under the bonnet, will only take the equivalent of a large, ten-pin bowling bag. You have to pay more for electrically adjustable seats. Tyre pressure monitoring, a big aid to safety in such a fast car, is also an optional extra. But, hey, Audi throws in a free cup holder. For all that money you only get two admittedly spacious and comfortable seats with a little storage shelf behind.

“Incredibly, there is room behind the front seats for two golf bags,” says Audi. Unfortunately, there’s no room for the clubs. 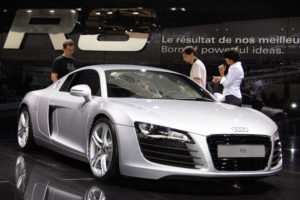