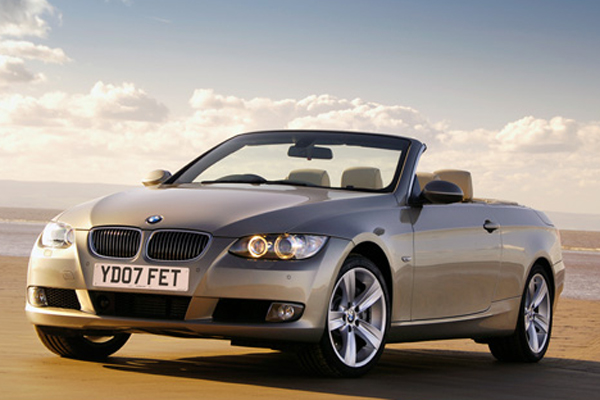 Great Engines, Handling Will Keep The Customers Satisfied.
**** out of 5 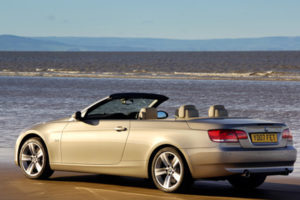 With the steel roof automatically stowed away (press the button on the centre console and wait 22 seconds) the car looks fabulous from every angle. The elegant, clean lines sweep back towards the rear, with an uninterrupted, near horizontal wedge shape.

But when the rain starts and the three-piece roof has to be deployed, the look is rather different. Out goes the charismatic purity of line, to be replaced by a dumpy rear end with the joins in the roof rather too prominent.

This isn’t just a problem for BMW. It is a common negative with coupe convertibles. They tend to look the business in sun bathing mode, but rather less pretty with the three-panel retractable roof in place, because of the huge engineering and design problems. 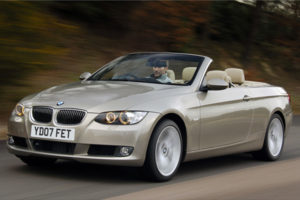 There is another penalty to pay. Stowing all that metal in the boot – the canvass roof has gone for good – severely limits usable storage. BMW says with the roof up there’s 350 litres of space. With the roof stowed this is cut to 210 litres, but unfortunately the remaining space is narrow, constricted and hard to use. You’d need an elephant to flatten your suitcases to make them fit. There are four seats, and the rear ones are designed to fold flat to provide extra storage.

Great for crazy golfers
There is a “through-load” function, which after folding the rear seats flat allows skis or a set of golf clubs to be loaded. Your golf plans shouldn’t be very ambitious because there’s not much room; great for the local crazy golf course maybe.

The hard top sets new levels of refinement and security, says BMW, allowing an increased glass area for improved visibility, while retaining structural strength. You can see why BMW decided to replace a ragtop with a steel roof – this car is as quiet as a saloon. 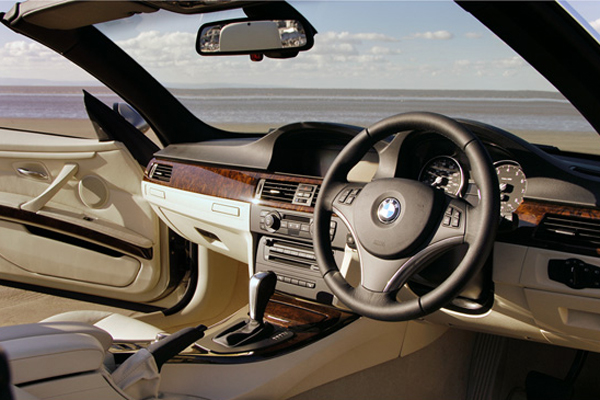 The rear side windows are 30 per cent larger than the outgoing 3-Series Convertible, and visibility through the rear windows has been improved by 38 per cent, according to BMW. The roof closes in a concertina action into the upper part of the boot cavity. To access larger objects placed in the boot before the roof has been lowered the retractable hardtop can be opened to a halfway point enabling items to be removed. The roof is then returned to its original position.

The roof panels are made of thin steel and weigh 75 kgs/165 lbs in total and this ensures refinement and security without compromising the handling and agility of the car.

On the highways and mountain roads inland from this eastern Spanish port city, the car drove to the manor born, with simply wonderful steering and road manners. Its powerful new engines perform quietly and efficiently, with the most fabulous noise when urged on.

Twin-turbo direct injection
At launch there were two versions, a 335i SE with a straight six cylinder twin-turbo direct injection 3.0 litre engine producing 306 bhp, and a 325i SE, with a more conventional 3.0 litre straight six engine producing 218 bhp. The 335i jumps from a standstill to 62 mph-100 km/h in 5.8 seconds, and its top speed is limited to 155 mph; the 325i does the sprint in 7.6 seconds, and peaks out at 152 mph. More engine options will soon be available, including an entry-level four-cylinder 2.0 litre 320i and a diesel, the 330d SE Convertible. The 330d CC diesel engine has a torque curve “flatter than a 14th Century map of the world”, says BMW. Better quickly “google” an old map to see what that’s all about.

As well as the usual array of airbags and safety devices, if the car’s computer detects a wheel has left the ground, pop-up rollover bars appear in an instant. There is computerised stability control, self-drying brakes, two front air-bags and body and head side airbags. 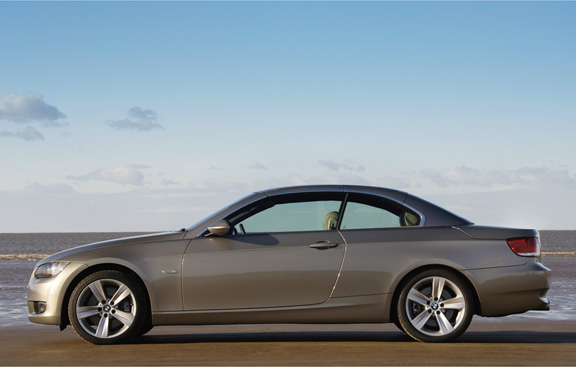 The car has leather seats which reflect the sun. Called “SunReflective” technology, they have embedded pigments which reflect infra-red radiation to cut the temperature of the seats and armrests by up to 20 degrees centigrade. So if you’re embarrassed by the podgy way the car looks with the roof in place, you can leave it out in the sun with the roof in the boot. 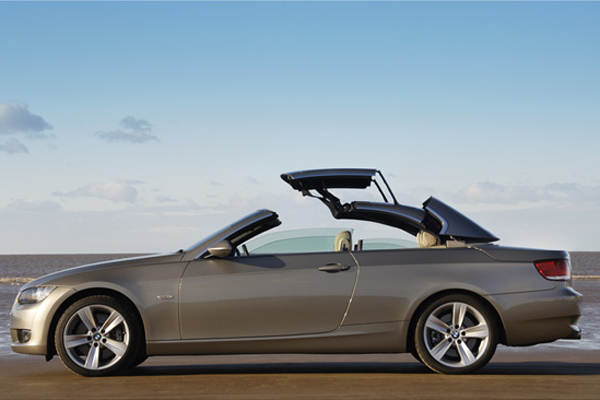