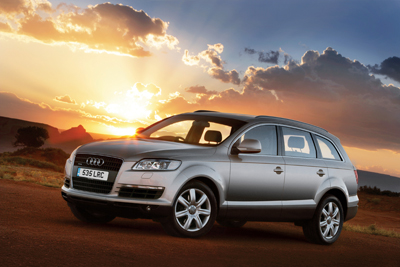 Massive, Comfortable, Capable; Soon To Be A Dodo?

Don’t Worry Though-Hybrid SUVs To The Rescue.
**** out of five

“Even big diesel SUVs like the Range Rover, Mercedes ML and Audi Q7 are branded as evil, even though they sip fuel fairly frugally, especially if you measure the per head count of CO2 output made possible by their 7-seats”

I braced myself for manifestations of SUV hate. After all, I was planning a 1,500 mile trip across Europe to the Geneva car show and back in a massive, gas-guzzling machine said by environmental maniacs to be not only directly responsible for killing the climate, but always piloted by irresponsible, greedy, rapacious, scum-of-the-earth sonsabitches.

In England, or rather in and around metrosexual London, a car like this would attract abuse from Sandelistas, egged on by London mayor Ken Livingstone, convinced that anyone driving an Audi Q7 3.0 TDI quattro SE is destroying the planet. When you park SUVs in our great cities, you are likely to find infantile messages pinned to the windscreen suggesting you are not a respected member of the human race unless you squeeze you and yours into a Fiat Punto or a Smart.

But aggravation came there none. 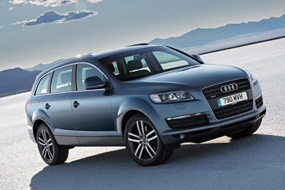 Between Sussex, Dover, an overnight stop in Troyes, France, and daily trips between Geneva and France’s Annecy, the Q7 was hard to miss. It is a massive seven-seater. The design is more rounded and attractive than its siblings the VW Touareg and Porsche Cayenne. The Q7, part of the joint venture between VW and Porsche which gave us the Touareg and Cayenne, is longer than its two family members, with the tape measure showing 5.09 metres (16.7 feet) compared with 4.78 metres (15.68 feet) for the Cayenne. It’s also wider than everything in its class, and it has the longest wheelbase. This would be the mother of all SUVs if GM hadn’t invented the Cadillac Escalade.

Tut-tut
On the highway the Q7 is magnificent. It cruises quietly and relentlessly.  At motorway speeds which would lead to much puritanical tut-tutting in England, followed by a huge fine, license threatening penalty points and maybe the clanging shut of iron doors, the Q7 powers on safely, cosseting the passengers almost in the manner of a Range Rover. Engine noise is restrained even at high speeds, limited to something of a rumble. 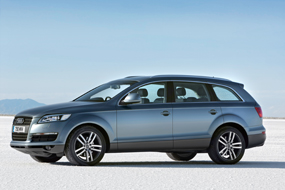 The V-6 diesel puts out a nice beefy noise when accelerating up to motorway cruising speed. The steering is always accurate, if not quite as satisfying as a BMW’s. The six-speed automatic gearbox reacted smartly to kick-down, although I felt it should have selected fifth gear when manual mode is chosen; why else would you want to engage manual when you are in top-gear? The standard adaptive air suspension keeps the Q7 remarkably level through the corners, much better than the Range Rover Sport.

The base price of the Q7 3.0 TDI quattro is a reasonable sounding £39,000 (€57,000) but after adding on bunches of extras to gain SE status, like metallic paint, leather electric sport seats, sat nav, upmarket stereo, parking assist, and the “Audi lane-change assistant” (£450-€660) the price closes in on £49,000 (€71,600); very much Range Rover Sport territory. The lane-change assistant is embedded in the huge wing-mirrors and flashes amber when overtaking traffic moves close, from the left and the right. I have to admit that every time they flashed into action I thought, crikey, how much would that cost to replace.

Massive, comfortable
Clearly I don’t have the right income flow to feel at ease in an expensive machine.

The seats were massive and comfortable. I loved the automatic tail-gate, which is raised by a click on the key fob, and lowered by reaching up and pressing a button. 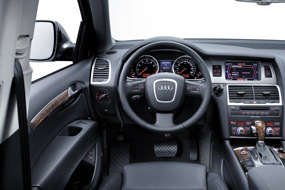 Fuel “economy” was not as bad as I expected and averaged 24.9 mpg over the 1,500 mile trip. “Economy” edged up to 26.8 mpg between Dover and Sussex, where fear of the fascist state induces lower speeds close to 80 mph. This compares with a Volvo XC-90 diesel’s 26.0 mpg over similar territory to France and back, and a Range Rover Sport diesel’s 23.2 mpg, again deep into France and back to the Channel ports.

Coming up with criticism of a high tech marvel like the Q7 is difficult, almost pointless, but let’s try anyway. The interior was classy, but a bit sombre and depressing. The Range Rover’s charismatic interior scores hands down here. The SatNav is the opposite of intuitive, but when you fathom out its quirks it performs beautifully, finding my hotel in the middle of Troyes old town, buried in mass of roadworks, one-way systems and narrow roads. (Le Champ des Oiseaux – http://www.champdesoiseaux.com/ – moody, expensive, no lifts, don’t bother).

Where’s the “off” button?
A couple of times when the machine was about to take me in a doubtful direction, I needed a button which would quickly say what route was being planned (was it actually tracking the route I wanted, or another one stored in the device?) A simple “off” button, would be useful too. I also selected a route the night before to make sure blood pressure levels were kept in check early the next morning. Next day it had disappeared. 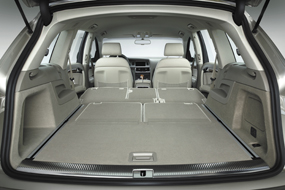 O yes, and I’m really struggling here for things to criticise – I never did manage to engage cruise control, although I didn’t try all that hard. The coat hook in the rear was set in the middle pillar at 90 degrees, rather than flush with the door. This guarantees that your jacket gets caught every time you shut the rear passenger door. And when you park in a multi-storey make sure you can’t get boxed in by someone in the empty space alongside. This is a massive machine and getting jammed in a parking lot is almost guaranteed.

“because the likes of Greenpeace, Friends of the Earth, Hollywood and David Cameron have been suckered into thinking hybrids work, the future of the SUV isn’t really in doubt”

Big SUVs look as though they could be heading for the knacker’s yard, as green fascists and envy merchants, now being led by “Conservative” David Cameron, demand that they are outlawed. Note that shallow media organisations like the BBC keep talking about the “pollution” caused by gas-guzzling SUVs, when the pollution was eliminated years ago by catalytic converters. They say “pollution” when they simply mean fuel economy.

And the BBC and its ilk talk about 4x4s, as though all them gulp fuel as if there is no tomorrow. I don’t think Suzuki Grand Vitaras or Toyota RAV4s use more fuel than regular cars. Even big diesel SUVs like the Range Rover, Mercedes ML and Audi Q7 are branded as evil, even though they sip fuel fairly frugally, especially if you measure the per head count of CO2 output made possible by their 7-seats.

Sucker Cameron
But don’t bank on this happening. Next year Audi will unveil a hybrid version of the Q7, and many of the other big European manufacturers will do the same. The Lexus RX400h (h for hybrid) has led the way here. Even though we know that hybrids don’t really work yet – (fuel economy is often poorer than a modern diesel, they are heavy because of the two engines, and there are big questions about long-term reliability, recycling and residual values) – because the likes of Greenpeace, Friends of the Earth, Hollywood and David Cameron have been suckered into thinking differently, the future of the SUV isn’t really in doubt. 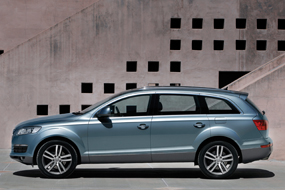