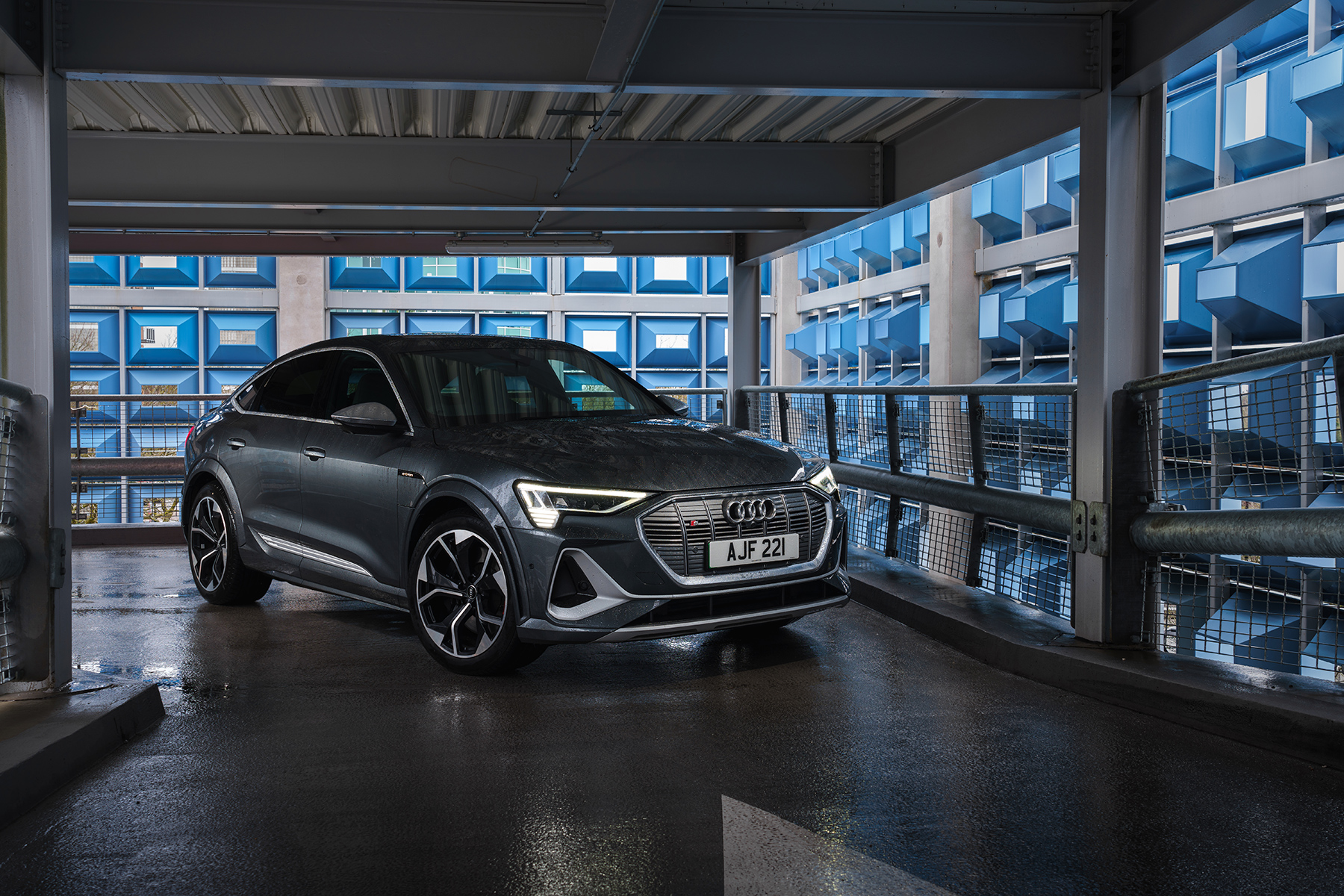 “if your driving needs include long-distance journeys, you’d be better off with a PHEV”

There is such a thing as a free lunch.

The regenerative braking technology on this Audi electric car could be very effective and on some journeys the miles consumed from the availability offer were less than those actually travelled; just as well given the paucity of the range from what would appear to be a powerful, 95 kWh battery. Maybe it’s simplistic but this car starts at £79,900 and I’d expected awesome range, of at least 300 miles. Just like a Tesla Model X. 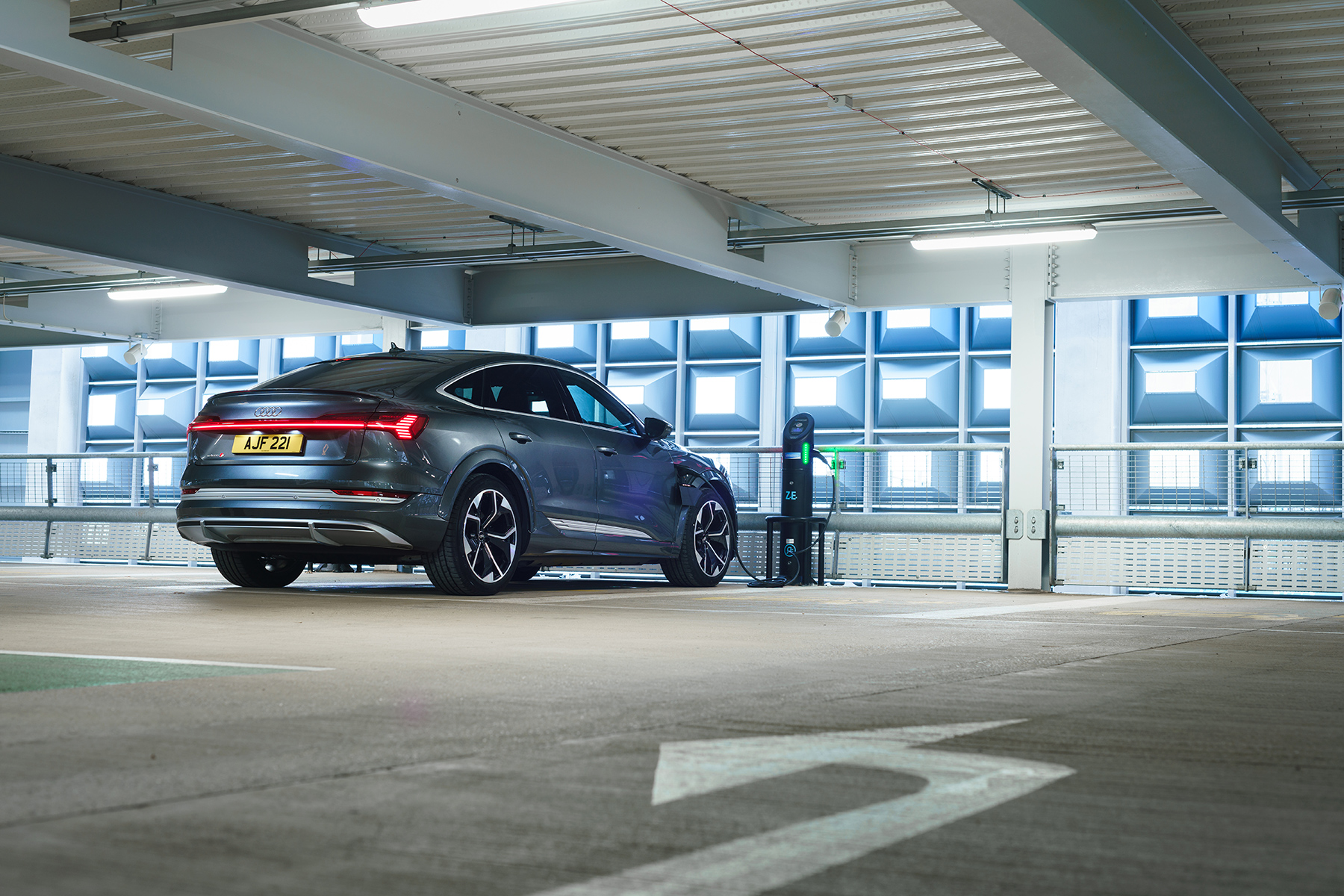 In the event, the claim was a mere 241 miles, but after 5 fill-ups from my ChargePoint wall device I averaged 180 miles, with the maximum 186 and minimum 177 miles. That’s a feeble 25% less than the claim, and when you heed Audi’s advice never to put more than 80% in to safeguard long-term battery life, you’re left with a miserable 144 miles.

But let’s get back to the good news. Regenerative braking works well. On my test run of rolling Sussex hills towards Midhurst the car travelled 63 miles but only took 45 miles from range availability. It didn’t like journeys mainly up hill – a 17-mile trip on rising roads used 30 miles of availability, but on the way back used only 8. Another 58-mile trip including 30 miles of motorway cruising at legal high speeds used “only” 64 miles.

Neat
The regenerative braking is engaged by firstly selecting “efficiency” from screen options and that immediately induces a feeling of braking as you lift your foot off the accelerator. You can increase the impact by pulling back a paddle behind the steering wheel on downhill stretches, then again on steeper ones. A little window opens on the dashboard to show this, while if you press the brakes, the impact of extra electricity going back into the battery will be shown too. Neat. 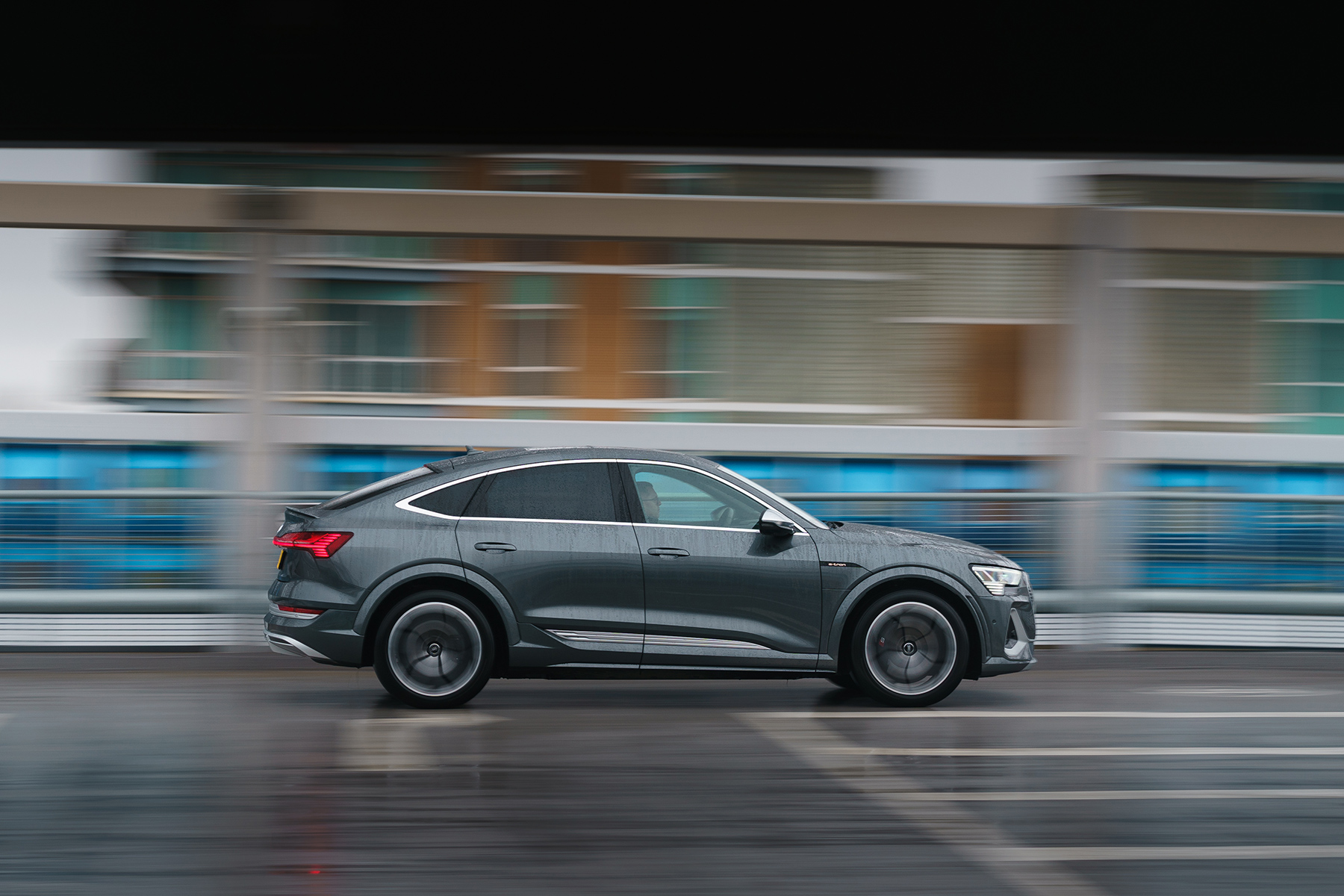 And now for some more negatives. A 31-mile jaunt just in the outside lane of a motorway consumed range at a 76.1% rate. In other words, if you were travelling 100 miles across Europe at 130 km/h you’d get just over 76 miles of travel. That’s much better than the Polestar 2’s 41% and just ahead of the Jaguar I-Pace’s 73.25%. That gives an effective motorway range of 109.6 miles. But given any normal person would probably start looking for a charging stop with 50 miles left, it’s really not much more than 90 miles. Just don’t take this car on your summer race to the sun or to your aunt in Glasgow.

The car itself as a package is fantastically impressive. It looks the business – my version was a deep metallic blue. The quality of the build is just as you’d expect; awesome. The interior is luxurious with impressive stuff everywhere. The performance was electric at its best; instant reaction to requests for speed accomplished with hardly a sound. Handling was crisp and impeccable and ride from the air suspension made my own Suzuki Vitara fell a bit like a rattlebox. Rear seating didn’t seem compromised by the Sportback-plunging rear line. Golfers will love the boot space. 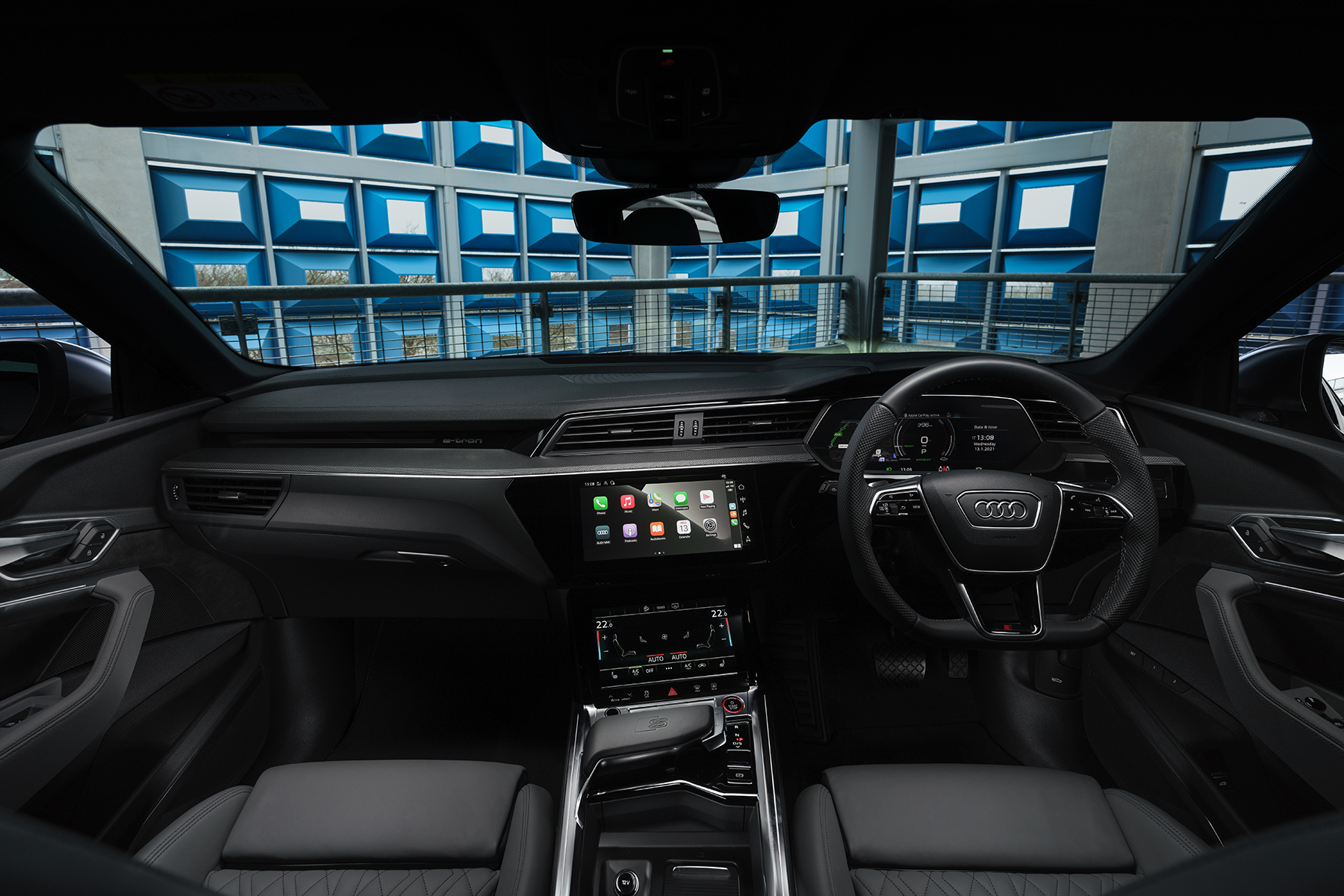 Virtual door mirrors
The Audi e-tron Sportback 55 quattro starts at £79,900 and this one had some pricey extras. One I’d do without was the “virtual door mirrors”. Instead of the wing-mirror in the traditional position, it’s replaced by a little screen set in the door, just below where you’d look normally but inside. The left side mirror was also set similarly. I found the image too dull to be of much use, and the fact the wing-mirror was replaced by a camera physically clinging to the outside of the car made no sense. Surely Honda e’s idea of using cameras mounted out of sight makes more sense, although I found that less than user friendly too. £1,250 if you fancy it. The “Tour pack” was £1,950 and “Comfort and Sound” £1,895, but I’m not sure exactly what they did. The Panoramic glass sunroof, £1,475, was useful. Another nice touch was a little button you press on the outside to open the charging access and there was another one on the opposite side. Very thoughtful.

Bristling with infotainment
“S line specification lends a more dynamic air through exclusive front and rear styling treatments, privacy glass and larger alloy wheels – in this case with a 21-inch diameter. Matrix LED headlamps with front and rear dynamic indicators are standard, as is sport suspension based on the adaptive air set-up that is standard for all e-tron models.

“The e-tron Sportback 55 quattro models combines a 95kWh battery fitted as a wide flat block beneath the passenger cell with two asynchronous electric motors – one per axle – giving a combined output of 265 kW and 561 Nm of torque. However, they can do better still – by shifting the gear lever into the S position and fully depressing the accelerator pedal, the driver can access boost mode, liberating the full 300 kW of output and 664 Nm (489.7 lb-ft) of torque for eight-second phases, enough to pare back the 0-62mph acceleration time to 5.7 seconds.” 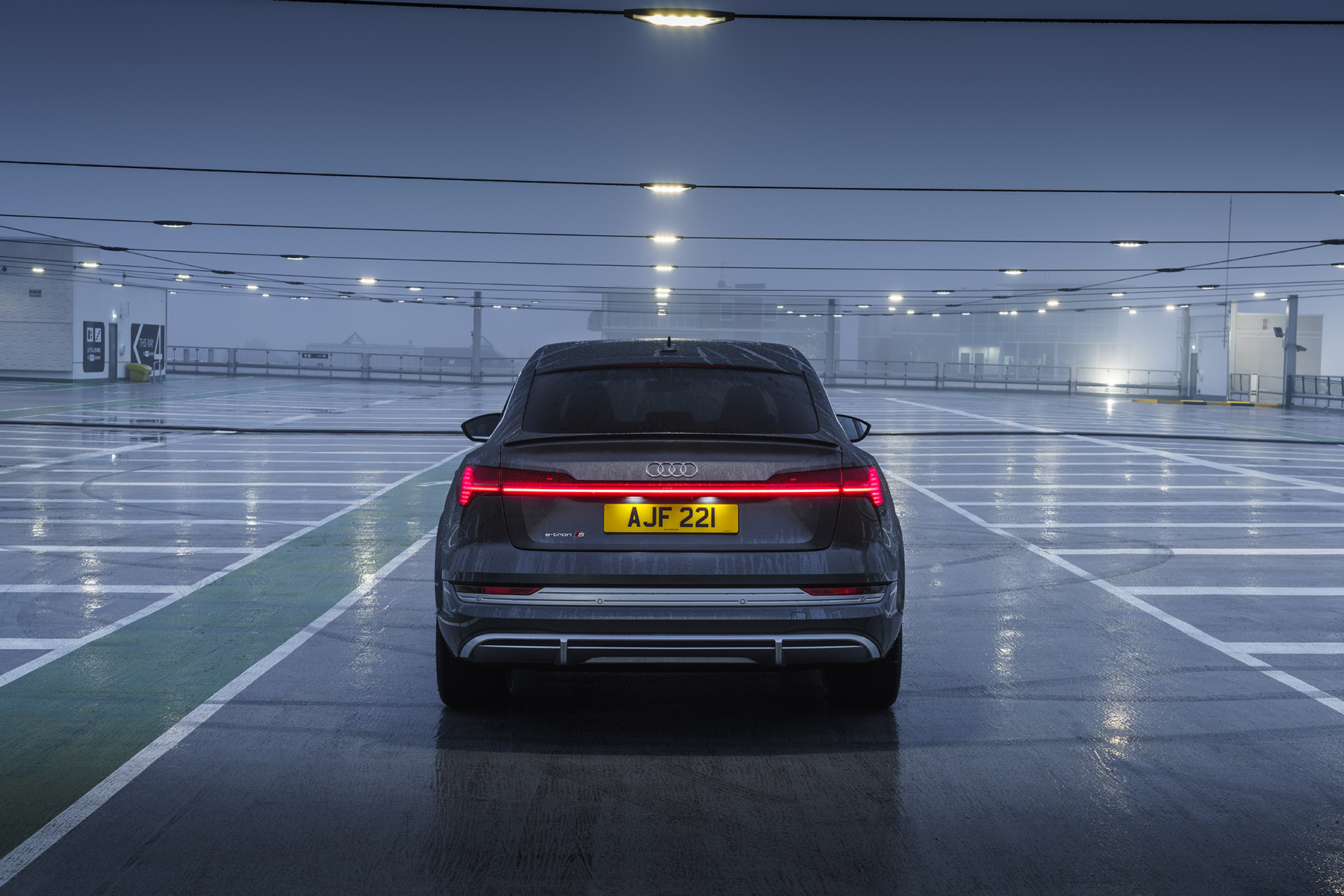 What to buy?
The choices in this area of the market are thin but tasty. There’s the Tesla Model X, the Mercedes EQC, the Jaguar I-Pace and the BMW iX3. BMW’s iX SUV should appear later this year in Europe and next year in the U.S. I’d expected that electric cars at the pricey end of the market would at least have adequate high-speed cruising speeds, but that’s beginning to look uncertain. Tesla claims over 300 miles for its base Model X, which I’ve driven but haven’t subjected to a rigorous battery capacity check. BMW claims 264 miles for its base level iX, but these WLTP figures seem to be as misleading as the previous ones if the Audi’s 241 miles equals 180 minus 20% are anything to go by. So if your driving needs include any long-distance journeys, you’d be better off with a PHEV (plug-in hybrid electric vehicle). 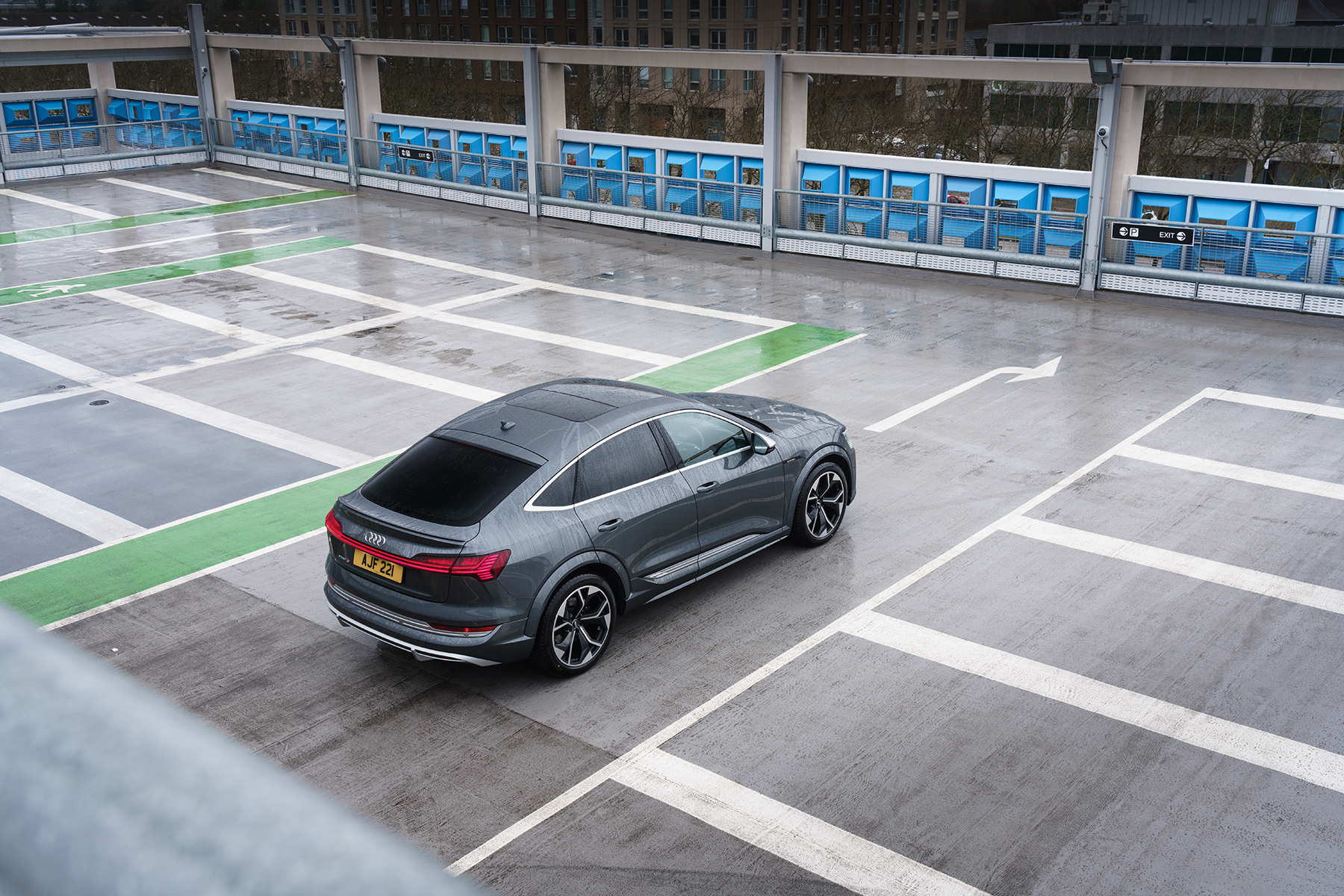