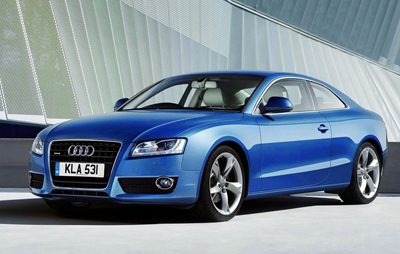 The new Audi A5 is simply beautiful, with graceful, sweeping athletic lines which forsake ostentation. At least most of it is.

Someone at Audi headquarters forgot to tell the design team responsible for the front end that the theme was understated restraint, and they decided to give it brash LED running lights and an aggressive mouth which will rampage down motorways, filling your rear view mirror insisting that you get out of the way, now.

Personally, I’ve no time for coupes. 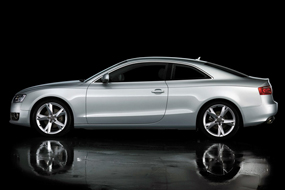 They are less flexible than their four-door siblings, perform like their twins on the road, cost more money, then depreciate faster, and you’re likely to bash your skull or cripple yourself as you clamber into the back. But undoubtedly there are millions of motorists out there that covet coupes, and the A5 has a powerful case to make for your money, even against the old enemy BMW.

The biggest opponent for the A5 is of course the BMW 3 series coupe, and although the BMW is a terrific driving machine, the coupe version looks chubby and podgy compared with the Audi. On the looks front, the A5 wins hands down. The design dates from the Nuvolari concept design first shown in Geneva in 2003. From the side it reminds me of the old, late 1990s Peugeot 406 coupe, a Pininfarina design which was so beautiful, so elegant, that it induced me to take my one and only test drive in a Peugeot. (The fit and finish of the interior was very sloppy and the dealership was useless – result BMW 323i, 4-door).

Improved handling
Dynamically, Audi has made a big effort to improve handing, with a radically different suspension set up and longitudinally mounted engines which allow the wheel base to expand and improve load distribution and balance. Ride is firm, without the aggravating harshness of some earlier sporty Audis. 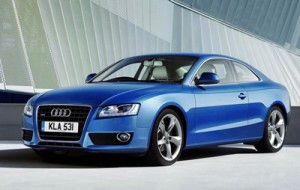 On the road, the A5 demonstrated that Audi engineers have done a great job. I drove the 3.0 litre 240 bhp V6 diesel quattro, which sling-shots the car from rest to 62 mph-100 km/h in just under 6 seconds. This is a truly sizzling pace, although the car doesn’t feel as though it’s performing like a latter day Ferrari, despite making a great noise. It will reach 155 mph if you take it back to the land of its birth. The diesel engine is marvellously flexible and quiet. The six-speed manual gear box was as good as it gets. The steering was quick and accurate; just as incisive as any BMW, although low-brow boy-racing tyre-squealers who jeopardise fellow road users by taking it to the limit, might quibble. That’s an argument not worth bothering with. You can expect that the 4-wheel drive “quattro” setup will give you more than adequate traction and grip. 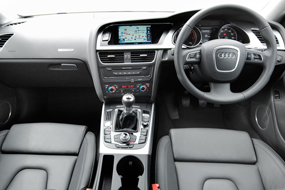 The interior, not surprisingly, was top class, although if I was paying £33,450 (€50,000) for a car like this, I would really want a little bit more pizzazz to go with the functionality. Standard equipment includes the Audi Concert sound system, 17 inch wheels, leather, xenon headlights and those LED daytime-running lights

Audi was also showcasing the S5 version, which is powered by a lovely, rumbly 4.2 litre direct injection petrol 354 bhp V8. This was also terrifically fast with 62 mph-100 km/h coming up in 5.1 seconds. When all’s said and done though this is made completely redundant by the diesel version, which performed just as well, but with 80 per cent better fuel consumption. Why would anyone buy the V8? It would be almost mentally deficient to go for this gas-guzzler, and it costs £39,825-€59,300.

The A5 coupe is a forerunner of the new A4 scheduled to debut next year, with much of the running gear and, hopefully, retaining much of the fantastic exterior design.

Unbiased insights
For an expensive brand which proudly jousts with the likes of BMW, Mercedes and Lexus for premium sales, you would expect top class reliability. This is always hard to assess, but “Which?” magazine has come up with a survey which gives us some unbiased insights. Its latest Best and Worst Brands survey “based on overall performances for breakdowns, faults and niggles”, puts Audi just under half way of a group of 37 manufacturers with a score of 76 per cent. That’s not very good until you look at some close neighbours. Mercedes is just below with 75 per cent. Half brother Volkswagen and Citroen, (yes Citroen) both also score 75 per cent. BMW is 12th with 77 per cent. Bottom is Land Rover with 68 per cent. Fiat and Renault are on 71 and 70. Tops is Honda with 86 per cent, closely followed by Toyota and a bunch of Asian makers, with Lexus 5th. Ford is the top European in 10th place with 78 per cent.

Losing manufacturers always either moan about the unsafe make- up of these surveys, or say they happened in the past, and any problems have been rectified. It seems to me that the margin between winners and losers is often so small, coming last doesn’t necessarily mean very much. Only serial losers and winners can be fingered by these results.

Anyway, the A5 is a powerful contender in the coupe category. If the new A4 looks anything like as good, I just might buy one to replace my BMW 330d. 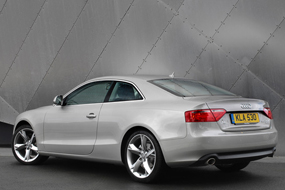