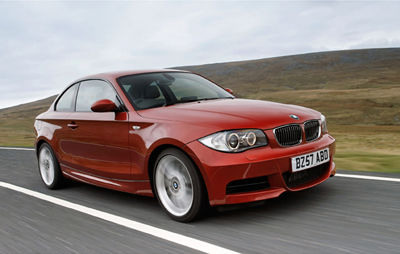 Faster than a Porsche Cayman S; too pricey for boy-racers.
*** out of 5

I’ve always disliked small, souped up machines, not least because of the way they seem to force you into driving like an idiot. I can remember taking my rather sedate Citroen XM company car into the repair shop many moons ago and being handed a VW Golf GTi as my short-term courtesy car. One minute I was a careful, low-key, thoughtful motorist; the next I was a foaming-at-the-mouth, fist-waver. 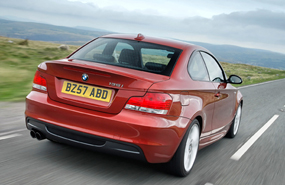 The Golf GTi was, and is, an electrifying little motor, and try as I might, I always found myself driving it much too aggressively. It must be some kind of sub-conscious reaction to the sharp throttle response, tight steering and harsh suspension of the GTi. I recently drove the Honda Civic Type R and Peugeot 207 Gti THP 175 and found the experiences a bit disturbing for the same reason. They both went like stink, stuck to the road like glue, and delivered the most uncomfortable of rides. But what I disliked most about them was the fact that because of their relatively cheap price, they brought hooligan-driving capability to the chav masses.

At least the new little BMW 1 series coupe doesn’t do that.

The 135i M Sport Coupe is scary fast and has uncomfortably harsh suspension. Also, the motion of ultra firm suspension in a short-wheel base car also delivers a nausea-inducing sensation to the passenger, or at least to this one. But, thanks to BMW, it is priced so high as to be beyond the average yobbo’s wallet, at £29,745 (€42,500).

Quicker than a Porsche Cayman S 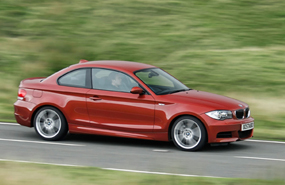 The 135i is an amazing technical accomplishment. The 3-litre straight six twin-turbo light alloy and magnesium engine produces 306 bhp. This power pushes the car to 62 mph-100 km/h from rest in 5.3 seconds, and on to an electronically limited 155 mph-250 km/h. BMW says this is quicker than a Porsche Cayman S, not to mention all its other rivals which it lists as the Alfa Romeo Brera 3.2 JTS V6, Audi S3, VW Golf R32 and Volvo C30 T5. Did a little Volvo just stray into this list? Yes it did.

If the 135iM is too expensive, there are other coupes that might fit your pocketbook, but which are also priced satisfyingly high enough to put off your average hooligan. They are also all diesels, another factor unlikely to appeal to our less intelligent brethren.

The 120d ES Coupe starts at £21,585 (€30,900), and with a two litre, 177 bhp engine gets you to 62 mph-100 km/h from rest in 7.6 seconds. There is a 120d M Sport Coupe, with the diesels being topped out with the 123d M Sport Coupe, which boasts the world’s most powerful production four-cylinder diesel engine. Sure, there are a few suspicious looking superlatives in there, but that doesn’t detract from the achievement. The 123d coupe’s all aluminium two-litre twin-turbo diesel produces 204 bhp and blasts you from rest to 62 mph-100 km/h in 7.0 seconds. 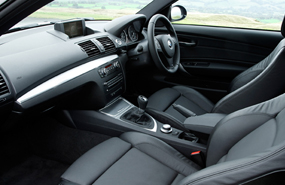 This engine returns a claimed combined 54.3 mpg (5.2 l/kms), while the smaller diesel will get you 58.9 (4.8 l/kms). The 123d also has stop-start technology and brake energy regeneration, electric power steering, a diesel particulate filter, and low rolling resistance tyres. Which reminds me, I must remember to find about these low-rolling resistance tyres. Sure, I understand that they save fuel by slipping along the road more easily than regular tyres. But doesn’t that mean you’ll slip off the road at the first bend, struggling for er resistance?

I got behind the wheel of the 135i and the 123d and both drove as you’d expect from a BMW; fabulous, responsive, direct handling and a wonderful six-speed manual gearbox. (from next March the 135i gets an automatic ‘box). The 135i has simply spectacular performance. Better get on a German autobahn if you want to keep your license. On the outside, the 1-series coupes have fog lights integrated into air inlets, and a split at the front to create a large central air intake. At the back the wheel arches are flared to emphasise sportiness. “L” shaped rear lights with LED strips distinguish the range from lesser models. The 123d and 135i have black chrome-plated exhaust pipes. The coupes are ever so slightly longer and minisculely wider than regular 1 Series cars.

Reeking of quality
The interior was classy, comfortable, understated and reeking of quality. You won’t want to get in the back, even if you can. You can specify two dashboard styles – one with navigation or one without. If you go for the navigation, the dreaded iDrive controller has been simplified, again, with eight programmable Favourite Buttons. Personally, I’d ignore the navigation option and buy a Tom Tom. 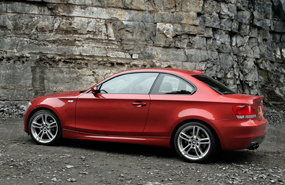 BMW will complete the entire little 1 Series range next year when it introduces a convertible.