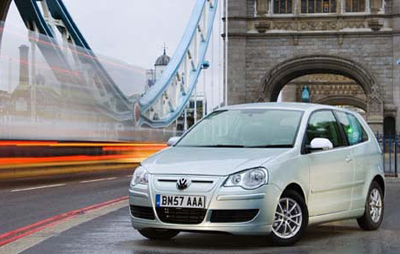 Little Diesel Does What It Says On The Tin; Well, Almost.

The most impressive thing about the VW Polo BlueMotion happened when I calculated the fuel economy. After about 200 miles of a journey towards Oxford and back, which included some 90 mph cruising, the little car not only managed 57.7 mpg (4.9 l/kms), but this coincided with the car’s computer readout, precisely. This has never happened to me before, with car’s computers regularly exaggerating the real world fuel economy by up to 30 per cent. VW, to its credit, has been one of the few companies offering very accurate readouts.

But there endeth the good news.

VW claims that the BlueMotion will do 74.3 mpg-3.8 l/kms, and I never got close to that. To be fair to VW, a colleague, admittedly imitating the driving of a typical brown-derby wearing local wrinkley, did manage more than 70 mpg.

The BlueMotion bombed down highways with great confidence. On the smaller roads, the car was surprisingly lively. Sure, it sounded a bit noisy, and was quite highly geared, but it had plenty of available power at lower speeds. 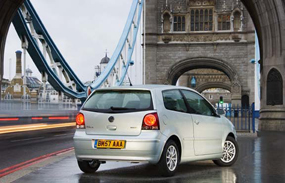 VW says that this version of the Polo doesn’t employ new, cutting edge technology, but is just a compilation of many improvements in engine design and body shape, to cut drag. Many components have been redesigned to cut weight. The electro-mechanical power steering saves fuel by only requiring use when the wheel is turned. Even the under-body has been redesigned, to improve the air-flow and therefore fuel use. The two-valves per cylinder motor uses the latest high pressure technology to eke out fuel use. It sounds a bit noisy from the outside, but inside the sound-proofing does a good job.

The BlueMotion moniker is VW’s trumpeted answer to the environmentalists demand for a cleaner car. Looking at its specifications doesn’t exactly raise the pulse-rate. The Polo BlueMotion has a 1.4 litre, 3-cylinder diesel engine which produces about 80 bhp. 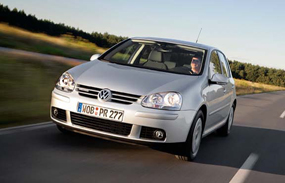 VW said it has pulled out all the stops to achieve the best fuel economy, but there’s one innovation it hasn’t gone for. A surprising omission is Stop Start technology, which is now ubiquitous on BMW vehicles and many Peugeots. As the name suggests, this acts to cut the engine out in traffic and automatically fires it up again when you want to move off and saves a few percentage points of fuel. VW says it hasn’t included this because an attempt in the past wasn’t popular. In my initial report on the BlueMotion I predicted that VW will soon change its mind on this, but now I’m not so sure. When the Stop-Start system does its work in traffic, the car’s computer figures out when the battery is having difficulty powering all the systems, so it will quickly switch the engine back on. It seems to me that in even the most fluid of traffic jams, stop-start isn’t going to be much help. We shall see.

The BlueMotion comes in two versions and VW eloquently describes them as “1” and “2”. The base “1” version with 3-doors £12,000-€17,300, without air conditioning, although it does include a radio/MP3 compatible CD player, electric windows, a trip computer, ABS and 4 airbags. BlueMotion 2 adds things like air conditioning, leather trim, and rain sensing wipers. This starts at £12,845-€18,500. 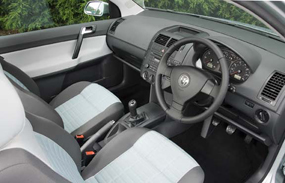 The BlueMotion concept will find its way across the entire VW range with Golf and Passat equivalents and this raises an interesting question. If the European manufacturers, as promised, do offer versions of their cars which are super fuel-sippers, what happens if the public doesn’t buy them? VW doesn’t say what percentage of their sales will go to BlueMotion versions. After all, you can buy a petrol engined Polo which does nearly 50 mpg-5.7 l/kms for almost half the price of a BlueMotion version. Or could the cynic in me be right when the car companies say after about a year of this that the public just isn’t prepared to pay more money for economy cars?