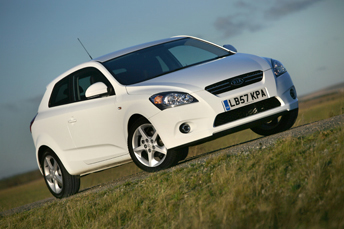 If The Looks Don’t Get You, The Monster Guarantee Will.
Pro Ceed Looks Good, Drives Well, With Quality Build.

ISTANBUL, Turkey  The Nissan Qashqai has proved that a car can be successful, despite having a silly name. So any annoyance generated by the Kia Pro Ceed’s ditzy title should be put to one side. Never cut off your nose to spite your face.  Even though Kia compounds the dopey nomenclature felony with an attempt to make us junk all known rules of grammar by insisting that there is no proper name capital letter in either  “pro” or “cee’d”, and an “underscore” in between.

This trick doesn’t always work. Smart tried a similar tack, insisting the name was spelt “smart” and look where it went.

Perhaps it’s a macho marketing thing. You are so confident that your car is the bee’s knees that you think that it will sell even with a huge metaphorical weight around its neck.

That’s certainly going to be true of the 3-door Pro Ceed. 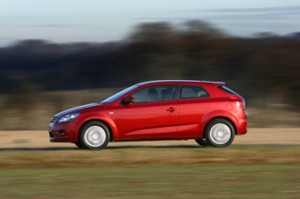 It is simply the prettiest mass produced small car I’ve ever seen. Stunning. Looks being everything, this car will be a winner, and help propel the Kia brand name away from having zero power to perhaps approaching the likes of Volkswagen or Volvo. It needs to be a powerful package to compete in the same sector as the Ford Focus, Vauxhall Astra and VW Golf. If you’re not superficial enough to be swayed by looks, the Kia Pro Ceed has a fantastic 7 year or 100,000 mile warranty. Kia, and its owner Hyundai, certainly have reputations for rock solid reliability. Now they are starting to catch up in the desirability stakes.

Dividing trench
While the looks may be stunning, you can’t say that the drive is particularly exciting. But everything works well. I drove the 1.6 and 2.0 litre diesel versions around Istanbul and on the distinctly dodgy highways of the hinterland, and that made it very exciting. Road “planners” in Turkey seem to think that rather than aluminium crash barriers, it’s a good idea to simply have a kind of trench dividing the roads. The trenches seemed deep enough to swallow the car, flip it over and kill everyone inside, but probably, stop the car from moving across into the oncoming traffic. Very effective.

The Pro Ceed’s performance, steering and manual gearboxes were just fine. The interiors were impressive, with top quality plastics and trendy mock aluminium surround on the central cluster which houses the radio and disc player. The design of the speedometer dials and subsidiary stuff was positively German. There seems to be plenty of room in the back. The boot was adequate, with rear seats which slide back and forth. 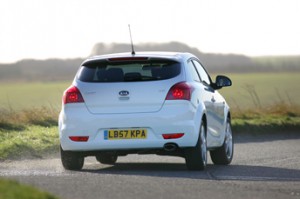 The Pro Ceed is built on the same production line in Zilina, Slovakia as its sibling, the 5-door Ceed. The 3-door is longer, lower and lighter than the 5-door, with only the bonnet and front wings in common. Whichever way you look at the car it is very attractive. I particularly liked the rear which has hints of Alfa Romeo Brera to it. From the side, the design sweeps aerodynamically and higher towards the rear, giving a real dynamic feel.

There are two petrol engines – 1.4 and 1.6 litres, two 1.6 diesels and a 2.0 litre oil burner. Equipment levels are generous, as you’d expect from a Korean manufacturer. There are three trim levels – 2, 3 and Sport. All Pro Ceeds come with front, side and curtain airbags as well as computerised brakes. There are active front headrests. Sport models have stability control with emergency brake assist. All models have an alarm, deadlocks, remote central locking, and door locks that activate when the cars move off. 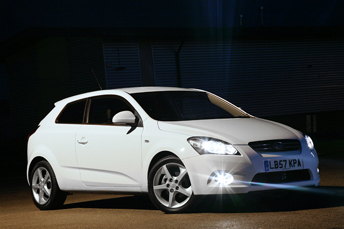