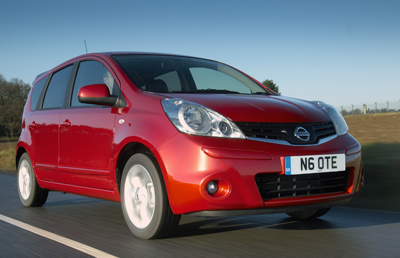 Nissan Tunes Up The Note

Minor Changes To The Front And Rear, More Colour Choices
“Nissan Connect” Is A Major Plus For Audio, SatNav And Phone
**** out of 5

“Being a Nissan, quality and reliability are bomb proof. I’m not sure how they do it with all that Renault stuff on board, but do it they do”

The Nissan Note has been highly successful since its introduction a couple of years ago, and the car has been mildly face-lifted with changes to the front bumper, bonnet, and front and rear lights.

Not much change that you’d notice, but there are some important additions that add to the attractiveness of the Note. The company has used the Note to pioneer “Nissan Connect”, which features touch screen audio, satellite navigation and Bluetooth for your mobile. Oh yes, there are new interior trims and exterior colour choices, and a new 1.5 diesel which Nissan claims will give you about 62.8 mpg.

The “Connect” system (among other things) allows you to play your MP3 player through your car audio without the need for external cables.

Nissan Connect will be fitted as standard on the top-of-the-range Tekna and as a £400 option on the Acenta.

The flexi-board boot storage system, enabling taller items to be fitted in the boot or allowing items to be stored away out of sight, now has a vertical position to help prevent items moving out of place whilst driving. 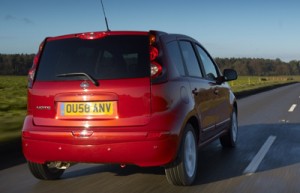 Safari Gold
Outside, the front gets a new nose with a reshaped bonnet, bumper, streamlined headlights and a shiny black finish to the grille. Both 15 and 16-inch alloys are all new designs for the Acenta and Tekna. Move to the rear and the tail-lights have been darkened for a more refined look, plus the Tekna gets reversing sensors incorporated into the bumper. Completing the new exterior look is an additional colour choice of Safari Gold.

Nissan says revised models with additional equipment normally mean an increase in price but not this time, in fact they have been reduced, with the entry level Visia coming in at £450 less than the outgoing model. A 2009 Note can now be yours for as little as £9,795, on the road. It’s not short on equipment either as it comes with CD player, MP3 jack, 15-inch wheels, rear sliding seat, front electric windows, four airbags and three rear headrests. Manual air conditioning is available as a £500 option. 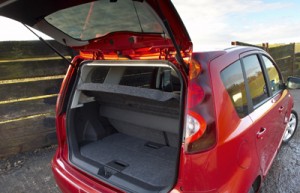 When I first reviewed the Note a couple of years ago, I suggested that it was about time the Honda Jazz was dethroned as number I Supermini/Mini MPV, and the dethronee might be the Note. But after a week with the new Nissan Note, I declared that the Jazz’s crown was still intact, although the margin was shrinking. The Jazz has been completely redesigned since then, making it a bit bigger and even more utilitarian. Perhaps most importantly for those, like me, who are suckers for superficiality, the Jazz has been made to look much cuter. It therefore retains my crown as numero uno.

Jazz still wins
The Note’s dimensions made it look more dynamic than the Jazz, but not anymore. The Jazz still doesn’t have a diesel, although that has become less important with the rise in the price of diesel. But there is going to be a hybrid Jazz for those really concerned about the price of fuel (which will of course also make it automatic). 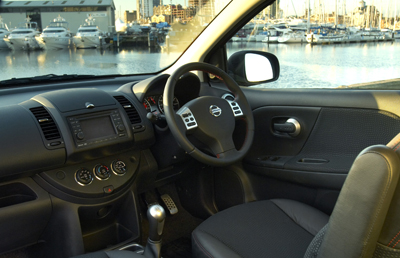 The Note is hugely impressive. It delivers a serious amount of interior space, and Nissan says it offers the comfort and equipment of a Volkswagen Golf-sized car. I wouldn’t argue with that. The rear passengers do particularly well.

The Note is built in Sunderland, north-east England, at least it will when production resumes again. Being in an alliance with Renault, it not surprisingly uses many basic components as the Renault Modus and Renault Clio III.

And being a Nissan, quality and reliability are likely to be bomb proof. I’m not sure how they do it with all that Renault stuff on board, but do it they do. 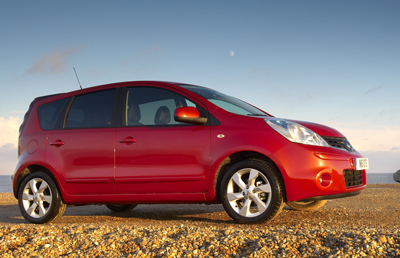