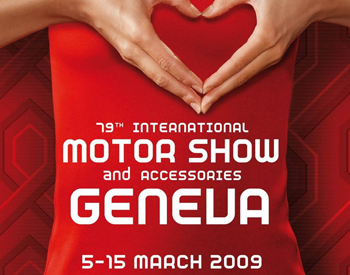 “The green agenda is a luxury too much. This won’t be good news for the environmental lobby who will throw their teddy bears out of the pram, but they will have to shape up and face a more serious agenda if we are retain this world-class industry”

GENEVA, Switzerland You can forget the environment, electric cars, fuel cells, hybrids which plug in and those that don’t; the theme at the annual Geneva Car Show this year will be survival of the fittest.

The European industry faces the worst downturn in living memory, as consumers put off buying cars, worried sick about job security. As they prune their budgets and brace for stormy economic weather, the last thing people are about to do is buy a new car. The current wheels will surely last another year, or two.

The Geneva show, which opens to the public on March 5 through March 15, is the first big European car show of the year. There are likely to be as many people as usual thronging the stands and kicking the tires, but they are more likely to be spectators rather than active buyers.

The big car manufacturers are bleeding red ink, and pleading with their governments to tied them over financially. Germany, France and Italy (but not yet Britain’s hesitant government) have introduced scrapping subsidy plans. Owners of rusting, 10-year old clunkers can send them to the knacker’s yard in return for up to 2,500 euros ($3,200) in Germany to buy an economical, cheap and clean new one. This had spurred some sales, at least of cars like the cheap and cheerful Dacia Logan, built in Romania by a Renault subsidiary.

The European Union has talked about making a huge wedge of money available for the industry – up to 40 billion euros ($50 billion) – but this has remained hot air so far. France has come up with cash for its national champions Renault, and Peugeot-Citroen – but this money has carried conditions that threaten to blow away the free trade principles of Europe’s Single Market. French bailout money carries the threat that rationalization plans, which had sought to move expensive jobs to lower paid areas of the world, will not be allowed.

Grandstanding
That makes sense for politicians like French President Nicolas Sarkozy in short-term grandstanding mode. But in 5 years time, when lean and hungry Chinese companies introduce their cars to Europe, the likes of Renault and Peugeot-Citroen won’t be able to compete.

Europe’s leaders meet at a summit this weekend. The European Car Manufacturers Association, known by its French acronym ACEA, is demanding urgent action.

“The E.U. has started filling a toolbox with potential instruments but too little of them have been actually put into use due to time-consuming procedures and a lack of guidance at E.U. level,” said Ivan Hodac, ACEA secretary-general in a statement.

Garel Rhys, emeritus professor of motor industry economics at Cardiff University’s Business School worries that long-term damage may be done to the industry if bankers sit on their hands for too long. Rhys is adamant though that the European industry is in much better shape than its financially troubled American counterparts.

“Europe isn’t the basket case that is GM and Chrysler in America. This is very different. They are essentially viable operations. They need holding operations hunkering down to allow them to take robust action themselves,” Rhys said.

Recession to depression
“There has been a massive reduction in output because of a massive fall in demand, which won’t reappear until 2011 at the earliest. It is possible that we get back to the sales of 2007 by 2013, but it could easily turn out to be 2014. The recession in the economy as a whole could turn into a depression and last longer than any other recession in the car market since the war,” Rhys said.

Professor Ferdinand Dudenhoeffer of the Center for Automotive Research at the University of Duisberg-Essen in Germany says there is a danger that France’s example of stopping manufacturers from rationalizing their home operations in the name of job protection, is only laying the ground for trouble in the future, from the east.

“We are running into a decade with additional protection that will hurt Europe after the crisis. It makes no sense to hold the jobs in France if that makes companies uncompetitive. We are just preparing for the invasion of the Chinese and Indians, which with their better cost structures will overrun Europe in 3 to 5 years,” Dudenhoeffer said.

One action which the E.U could take which would ease the financial pain for manufacturers is to postpone again, or dilute, tough new rules to raise fuel economy. Under pressure from the Germans, these rules, which require a fleet average of about 43 miles per U.S. gallon will be phased in from 2015, not 2012.

Squealing
Today’s fleet average is about 35 mpg, the same as the U.S. government mandated target for 2020, which U.S. manufacturers have been squealing about.

The European target would require much investment by the manufacturers, which looked possible last year when the E.U. was designing the new rules. This assumed that in the period before compliance was required, the industry was generating reasonable profits from which to fund the necessary research. This is clearly no longer the case.

But any rolling back on fuel efficiency is anathema to Europe’s environmental organizations.

Brussels-based European Federation for Transport and Environment (T&E) even objects to the car-scrapping scheme.

“All the scientists and economists who have studied such schemes come to an unequivocal conclusion – they do more harm than good in the long run. They are one of the most expensive ways thinkable to cut emissions,” said T&E director Jos Dings.

It wouldn’t be stretching credulity to predict that T&E would be incandescent if the E.U. delayed again, or watered down, its fuel efficiency rules. Cardiff University’s Rhys said the E.U. should grit its teeth and do it anyway.

Throwing teddy bears out of the pram
“The timing for the new rules for fuel efficiency should be lengthened because manufacturers won’t be in a position to make environmentally-friendly vehicles if they don’t survive. There should be no further impositions on CO2 or safety as well. The green agenda is a luxury too much. This won’t be good news for the environmental lobby who will throw their teddy bears out of the pram, but they will have to shape up and face a more serious agenda if we are retain this world-class industry,” Rhys said.

Duisberg-Essen University’s Dudenhoeffer doesn’t agree that the manufacturers should be let off the CO2 hook. He also departs from the conventional wisdom that says Europe’s industry should seek mergers and takeovers to ward off the bad times.

Since Fiat of Italy announced that it was seeking to take a 35 per cent in Chrysler, rumors of further possible deals have surged. Would Peugeot join Fiat/Chrysler? Might German luxury makers BMW and Mercedes merge? This week, Max Warburton, London based auto analyst with Bernstein Research, urged Mercedes to take-over GM Europe’s ailing Opel subsidiary. This was denied by Mercedes. Ford has said it wants to sell its Swedish subsidiary Volvo. GM’s Swede, Saab, has filed for bankruptcy protection and is looking for a buyer.

“The report about Opel and Mercedes makes no sense at all. There will no big mergers in the future. If you want to make companies like Opel with annual sales of only about 1.6 million (European market leader VW sold more than 6 million vehicles worldwide in 2008) long term sustainable you need platform sharing agreements rather than corporate mergers. Opel could share say, a BMW 3-series platform for its larger cars. That would also allow BMW to compete better with (VW’s) Audi. And why not put Ford Europe’s Focus and Opel’s Astra on the same platform? This would allow Europeans to be more competitive against VW and Toyota, and the Chinese who will arrive tomorrow,” Dudenhoeffer said.

“We need to achieve scale economies by cooperation for success in the future,” he said.

E class star
Meanwhile in Geneva, the star of the car show will likely be the new Mercedes E class, which made a tentative bow in a Detroit hotel in January. For some reason, Mercedes showed its new car to a limited audience in Detroit, but withheld it from the Cobo Arena. Chevrolet’s bold little Spark will also be launched in Geneva, while at the other extreme, BMW’s Rolls Royce will display a new “baby” model concept. Rumor has it Rolls might revive its Silver Ghost name for this one.

There will be a surprising number of new cars on show. When most of them were given the production go-ahead, the industry was still firing on all cylinders. Notable new motors include the Aston Martin V12 Vantage, Toyota Verso, and the VW Polo. The Polo, when conceived, was not bound for the U.S. market. With U.S. buyers downsizing fast though, expect to see this little car in America before too long.