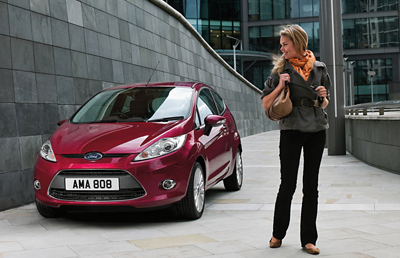 High Quality, Drives Well; But About 15 Competitors Do Too.
As Buyers Downsize, Small Cars Now Loaded With Kit.
Will New Honda Jazz Stay At The Top Of The Small Car Pile?

SIENNA, Italy – Ford’s new little Fiesta looks terrific, is beautifully put together, drives with precision and smoothes out the bumps like a luxury car. 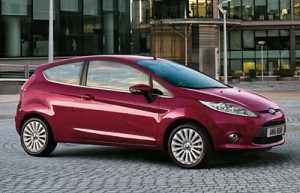 Before you say I’ve gone over the top in favour of Ford, I will just mention that I’ve said similar things about the Mazda2 (a Fiesta in disguise, designed and engineered by Ford’s Japanese affiliate), and cars like the new Seat Ibiza and the Chevrolet Aveo, because today’s small cars are better than ever. They are so good because the manufacturers know that the public wants fuel efficient small cars as the price of fuel rockets and car-hating politicians raise taxes on bigger cars. But with many buyers trading down from bigger more expensive machines, they will only be able sell vehicles which have a premium feel, and are loaded with things like air conditioning, electric windows, leather seats, automatic gearboxes and cruise control.

Next month I’ll be driving the new Honda Jazz, my current favourite small car, to see if it has managed to keep itself ahead of the game. Meanwhile, it has to be said that Ford has come up with a powerful contender. 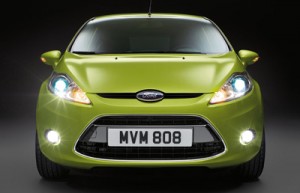 The most impressive and timely version of the new Fiesta, which goes on sale across Europe in October, is the ultra-green ECOnetic, which has a 1.6 litre 89 bhp TDCI high-technology diesel engine returning an average 76.3 miles per gallon (3.7 l/kms). Because it only emits 98 grammes of CO2 per kilometre, it is exempt from British road tax. The ECOnetic also has improved aerodynamics, low rolling resistance tyres and enhanced lubrication, helping to wring the longest possible distance out of the fuel tank.

Revolution
The new Fiesta though is not only important to Ford in Europe. It must lead a revolution in car buying habits in the U.S. too. Its parent company in America is in a grave financial condition – Ford Motor Company lost $8.7 billion-€5.6 billion in the second quarter of 2008 – mainly because Americans, irked by higher fuel prices, were turning their backs on their traditional gas guzzling SUVs and pickup trucks and turning to smaller cars, an area in which Ford is weak in North America.

So Ford is calling the Fiesta a World Car and will build it in low-cost Mexico and export it to the U.S. in 2010. Similar versions will go on sale in South America, South Africa, Australia and China too. Ford Europe is also expected to provide a new Ford Focus design for the U.S. market in 2010, the new C-Max people mover in 2011, and perhaps even the tiny Ford Ka, which will be made in Poland in a joint venture with Fiat of Italy. None of these cars will be exported from Europe, because the weakness of the dollar against the euro makes them much too expensive for U.S. buyers 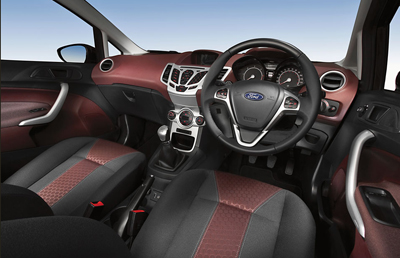 Studio
In Europe, the Fiesta, which will be built in Cologne, Germany and Valencia, Spain, will have various diesel and petrol engines from 1.2 litres to 1.6 litres. The cheapest, 1.2 litre version’s price will start at £8,695-€10,760. You can choose to have 3 or 5 doors. The Studio is the base version, with electric power-assisted steering, ABS, front, side and knee airbags, a CD player, central locking and power mirrors, but no air conditioning. The Style starts at £9,295-€11,500 and adds body coloured bumpers, mirrors and door handles, a four-speaker sound system, powered front windows and remote central locking. The Style Plus includes a heated windscreen and air conditioning. Zetec includes alloy wheels, front fog lamps, leather steering wheel, chrome grille and moody interior lighting. The top of the range Titanium, from £12,095-€14,980 adds bigger alloy wheels, electronic temperature control, privacy glass, cruise control, automatic headlamps, automatic wipers, and power folding mirrors.

The new Fiesta, which replaces the seven-year old previous model, is about the same size but has shed much weight and the 1.2 litre 3-door version weighs in at only 966 kg (2,129 lbs). Most of the engineering and design for the Fiesta was done by Mazda of Japan, which is controlled by Ford.

Exceptionally quiet
On the test drives around Sienna, only the Titanium 1.6 litre petrol and diesels were available. They both drove exceptionally well, with the diesel providing the more satisfying power delivery. They were exceptionally quiet and stable at high speed cruising on motorways. The 5-speed manual gearbox performed well, although the move into top gear required too much movement to the right. Early next year there will be an automatic gearbox available in a 1.4 litre model. It was clever of Ford to only make the more powerful and upmarket versions available to ensure the motoring press had no chance to have any negative thoughts.

These premium versions also had the Ford EasyFuel capless refuelling system, keyless entry and the “Ford Power” start button. The interior styling was bold to say the least, with huge wadges of chrome decorating the central part of the dashboard which housed the air conditioning and sound system. I found this attractive, but it won’t be universally loved, that’s for sure. The doors slammed shut with a satisfactory, big-car clunk.

Verve
Beauty is said to be in the eye of the beholder, but the Fiesta is exceptionally pretty and retains many of the design cues shown in the Verve concept car shown at the Frankfurt Car show in 2007.

The Ford PR machine is getting excited about the little car.

“The new Fiesta is a landmark moment for Ford. It is our most significant global vehicle product since the Model T and heralds the future for Ford product development,” Ford said.

Much responsibility rests on the new little Fiesta. You can safely say that if it bombs, so will the Ford Motor Company. 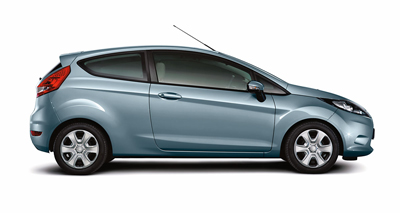