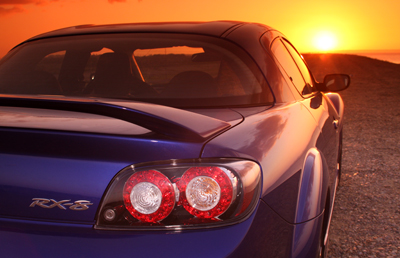 Is Mazda Keeping Rotary Credentials Warm For Hydrogen Age?
*** out of 5

You have to admire Mazda’s persistence, its sheer determination not to give up on its rotary engine investment. 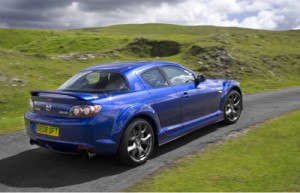 It has just face-lifted the Mazda RX-8 with a new front grille and bumper design, new front headlamps, new rear lights and larger exhaust pipes. The less powerful engine has been dropped leaving only the 231 bhp version, now called the R3. The previous car had a questionable oil system, which was said to overuse the stuff. Oil capacity has been raised and a larger oil cooler intake added to lower the oil temperature and hopefully solve the problem.

What remains is still a rarity; a powerful twin-rotor sports car which goes like a Porsche Boxster for Volkswagen prices with the build quality of a BMW or Mercedes. And it is a genuine 4-seat coupe. It still looks great and has two rear doors, hinged at the back, to ease entry for rear seat passengers.

When the car was first introduced 5 years ago, I raved about it and gave it 5 stars out of 5. Then, it had poor fuel economy when petrol prices were much lower than now. With current fuel prices, and the penchant for our politicians to add penal taxation on top of this, you would think that cars like the RX8 had a limited shelf life. So why does Mazda persist with the rotary engine down what looks like a cul-de-sac?

Waiting for hydrogen
The only reason I can come up with is the possibility that in the dim and distant future, when cars are finally powered by hydrogen, (rotary engines are technically better suited to this fuel apparently), Mazda will have the inside track.

Rotary engines produce a lot of power for their size compared with conventional petrol or diesel engines, and they produce it quietly. They need fewer moving parts and are therefore cheaper to build, and more compact. The downside for these motors has been their unacceptable thirst for fuel, and their inability to curb noxious emissions and meet standards set by governments.

The new R3 version only manages 24.6 mpg with a horrendous CO2 rating of 299 g/km, and that’s marginally worse than the original engine’s 24.8 mpg. 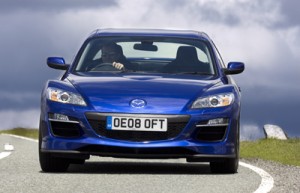 Over the years, there have been question marks about the reliability and longevity of rotary engines. In the 1960s, the rotary-powered NSU Ro80, and NSU Wankel Spider (Felix Wankel of Germany invented the rotary engine) wowed car buyers with performance, and looks, way ahead of their time. But the engines were unreliable, and were dropped after Volkswagen bought NSU in 1969.

Mazda of Japan also produced rotary engines in the 1960s including the Mazda R100 coupe, RX-2, and RX-3. It even used the engine in some small family cars like the RX-4. I drove an RX-4 in Belgium back in 1972 and its amazing performance belied its Nissan Micra or Ford Fiesta looks. It shocked some high-performance car drivers. What was this little puddle-jumper still doing in the rear-view mirrors at speeds of up to 120 mph? Alone amongst the big manufacturers, Mazda persisted with rotary power, with the RX-7 roadster the most recent iteration. Mazda won the Le Mans 24-hour sports car race in 1991 with the rotary-powered 787B.

The Mazda RX-8 is powered by a twin-rotor engine, and using conventional measurements displaces only 1.3 litres, although other measures show it to be the equivalent of either a 2.6 litre, or even a 3.9. Unlike a conventional reciprocating engine with cylinders, the Mazda twin-rotor has triangular shaped rotors which spin to generate power. The design makes traditional crankshaft and valves unnecessary, and produces lots of power, very smoothly. The small size of the engine means it can be placed more towards the centre of the vehicle, giving a 50-50 weight distribution over the front and rear axles. 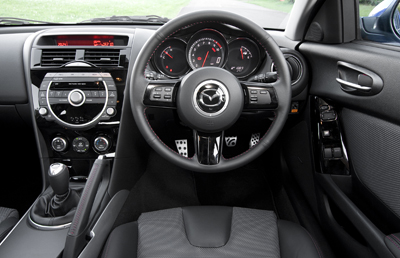 Hair-drier, fridge
As soon as you start up the RX-8 you are aware that this is a unique machine. The rotary engine makes a strange whirring noise, some say like a hair-drier, others say it sounds like a fridge. But it   becomes more of a pleasant high-pitched but sophisticated-sounding, almost rasping whine as you move through the gears. The engine revs at much higher speeds than conventional engines. The latest version produces maximum power at 7,500 revs, compared with the original version’s 8,200 rpm.

The new 6-speed gearbox is top class. The front-mounted engine powers the rear-wheels. Leather seats fit snugly. The dashboard is classy and stylish. The big central instrument dial gives the engines revs, with a digital readout of your speed in the bottom right-hand side of the dial. There is a variable red zone which rises as the engine comes to operating temperature. The steering wheel has been redesigned. The seats in the rear are a bit snug, but would be comfortable for a long journey. The rear-hinged rear doors mean that access is easy, unlike conventional coupes. 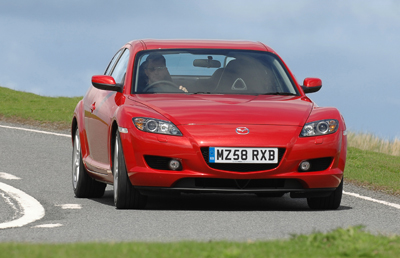 And yet, as you add up all these qualities, it does seem that this car has been overtaken by events. Just think of what a powerful diesel could do in this car. You could get similar performance, without having to pay the huge price that falls on cars now with poor fuel consumption. Mazda is a super-smart car company, at the cutting edge in many areas of design and production, so it must have a sensible reason for producing such a car. I’m guessing that it is keeping its engineering hand in for the hydrogen age, although I would advise not holding your breath waiting for that day to dawn.