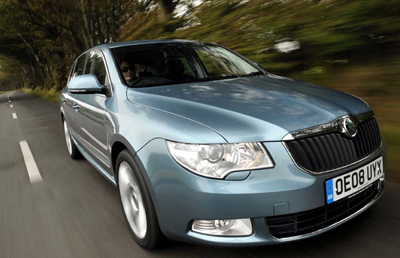 Czech Branch Of VW’s Big Family Saloon Will Phase Passat, For One.
Gizmo Changes Saloon Into Hatchback At Touch Of A Button.

“While Skoda agonises about the new name, the country should join in and decide whether it wants to be Czechland, Czechistan of Czechdom. Anything but the awkward mouthful, The Czech Republic”

“Skoda Superb? Sounds like an oxymoron to me,” said my tennis partner, who has obviously not been reached by the Czech company’s brand campaign, seeking to distance itself from the bad old days when Skodas were built to a laughably poor standard by political prisoners who fell foul of the old Russian rulers. 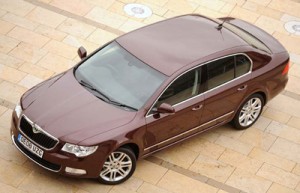 Czechland is of course now safely under the wing of NATO, and Skoda is protected by Germany’s Volkswagen, which owns it. Skoda has made brilliant progress as a maker of well built and well priced versions of cars like the VW Polo, Golf and Passat. Indeed the old Superb looked just like a dated Passat. Skoda hasn’t made the same mistake with the new Superb, which looks quite magnificent on the road, without the faintest hint of its sibling, the new Passat.

But that hubristic name. Skoda says it is only repeating a name which it used on a top-of-the-range car it produced in the 1930s. Maybe in the Czech language the name has a more modest ring to it. Maybe it doesn’t sound like a look-at-me braggart’s claim in Czech, or German for that matter.

Nissan has proved with the Qashqai that having a daft name won’t put off the punters. If a car is a terrific design, well made and fairly priced, people will buy it. The name “Superb” does seem to be a mistake, and might actually put people off buying the car, because immediately you say it, you induce a reaction of “Well is it superb then?” That’s a bit boring and embarrassing. It’s a shame too, because I drove the car for a couple of hours and it is really impressive. 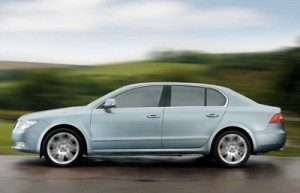 This is a big car. This is a handsome car. The version I drove had a beautiful leather interior. The cabin felt luxurious and expensive. The quality of the finish was top class, although the covering of the steering wheel seemed tacky and out of sync with the rest of the car. Rear seat passengers have masses of room. The engine is mounted transversely, or east-west, rather than north-south, and this frees up more space inside the passenger compartment. Skoda says there is more legroom in the back than in a Mercedes S class (that’s the biggest one, the African dictator’s default car choice mode). The boot is huge. There is also an impressive gizmo which transforms this saloon car into a hatchback, but more of that later.

The 2.0 litre 140 bhp diesel engine sounded restrained and sophisticated.  There are three diesels and three petrol engines to choose from – 1.9 litre/105 bhp, 2.0/140 and 2.0/170 turbo diesels and 1.4 litre/125 bhp, 1.8/160 and 3.6/260 petrols. There will be a four-wheel drive version, and a Greenline, Skoda’s token attempt to get the environmentalists of its back.  The 2.0 litre, 140 bhp version I drove had a 6-speed DSG automatic gearbox, (manual gearboxes have 5 or 6-speeds) one of those new fangled devices with the double clutches which make the change swiftly, quietly, and with no noticeable fuel economy penalty.

Precise, easy
On the highway, the car was quiet and felt powerful, even though it is not the most beefy engine in the range. The car’s steering was precise and easy. 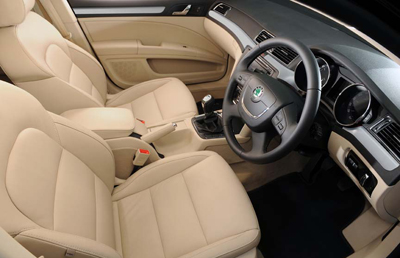 There are three trim levels – S, SE and Elegance. Standard equipment includes ESP (which uses computer power to stop you skidding, or overdoing it generally), seven airbags including one for the driver’s knees, front fog lights, remote central locking, climatic air conditioning, electric windows, and the Twindoor thingy which makes the saloon into a hatchback. SE costs £2,000-€2,540 more and adds stuff like multi-function steering wheel, parking sensors, cruise control, and dual-zone air-conditioning. Elegance costs another £2,500-€3,200 and includes 18 inch wheels, bi-xenon lights, leather, electric front seats, sat-nav, tyre pressure monitoring and Bluetooth. Prices start at £15,490-€19,650 for the smallest petrol engine, and top out at £26,675-€33,850 for the 3.6 V6 with four-wheel drive and DSG.

Heady levels indeed for a Skoda.

Saloon into hatchback
The Twindoor was designed by Skoda, and will be rolled out across the VW group’s VW, Audi and SEAT brands, and allows a car which looks like it has just a boot, to become a hatchback.

“Press the soft-touch button on the left of the tail gate edge and the boot lid opens in a traditional saloon manner. However, press the button next to it first and the central hinge locks, allowing the full tailgate to be lifted. The system uses an electro-hydraulic motor to lock and unlock the central hinge,” says Skoda.

The Superb, with the rear seats in position, has 565 litres of storage capacity. With the rear seats flattened, capacity rises to 1,670 litres, getting on for the kind of lugging capability you would find in a big estate car.

As an optional extra you can buy the Adaptive Front-light System which changes the spread of light depending on your speed, or if you’re turning. There’s Park Assist too, which for a car as big as this, might well be deal-clincher for the nervous. This takes over control of the car and parallel parks it perfectly, Skoda says. 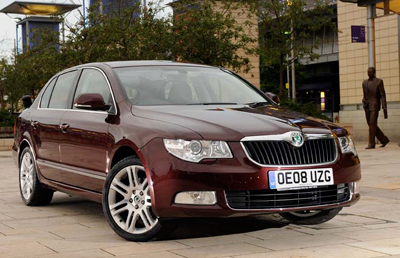 Name changes all round
The Skoda Superb is a cracking car, which will take the Czech company into new and higher level of the market. Pity about the daft name though. While Skoda agonises about a new name, maybe the whole country should join in and decide whether it wants to be Czechland, Czechistan or Czechdom. Anything but the awkward mouthful, the Czech Republic.