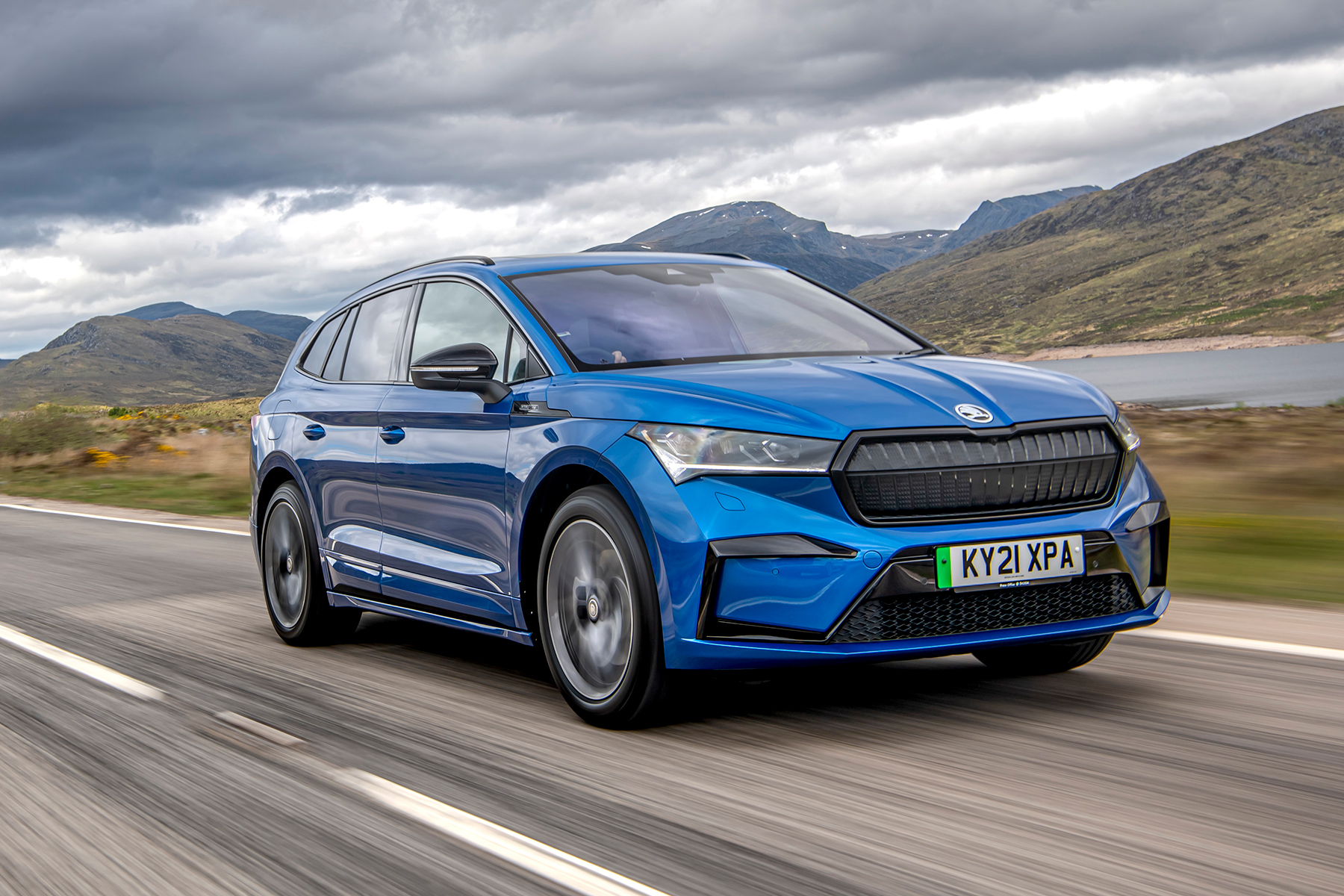 Volkswagen Subsidiary Skoda’s Electric Enyaq Might Be Getting Too Successful.

“An impressive trick right now would be if VW can bring the Skoda helium balloon closer back to earth, allow VW to take up that premium pricing position and offer a profitable large-volume BEV “people’s car” with a Skoda badge on”

If an automaker starts out as a value brand, like say Kia or Hyundai of Korea, and because of great success over the years it advances on premium territory, commanding acclaim for its quality and higher prices in the marketplace, stakeholders will be united in their praise and urge you continue the good work, right?

Probably not if you’re Skoda, owned by Volkswagen, and are beginning to encroach on VW brand territory. And particularly so if you look at the success of Skoda’s electric SUV, the Enyaq. (Skodas aren’t sold in the U.S.)

Enyaq prices are not quite as high as its VW compatriot’s, but not by much, and the iV80 Founders Edition, or which more later, sells in Britain for £48,415 ($60,700) after tax and before subsidies. Skoda is currently launching the Coupe iV, a sporty version of the Enyaq and a move further upmarket.

VW brand’s union leaders have worried that Skoda, pretty much the same under the skin as Volkswagens, is getting above its station and cannibalizing sales, and have reportedly suggested the latest technology be withheld from the Czech Republic-based pretender. They may well get their wish because Skoda’s next 3 electric cars are expected to be positioned below the Enyaq and will include a small car, and this will lessen its impact on VW electric products.

Momentum
Matt Schmidt of Schmidt Automotive said the Enyaq’s momentum has been stalled a bit by the production hiccups caused by the semiconductor crisis and then the Russian invasion of Ukraine. Competition is intensifying too.

“The Koreans are arguably the toughest competition now with the Kia EV6, Hyundai Ioniq5 and soon to be launched Genesis (Kia/Hyundai’s premium offshoot) GV60 giving VW a run for their money. Chinese manufacturers like SAIC’s MG may well target possible Skoda customers it left behind (as its prices rose),” Schmidt said.

The West European market for electric cars has grown incredibly quickly from scratch to about 1.2 million last year but seems to have settled into a narrow range of mainly medium to high priced SUVs, with no sign of any attempt to cater for the mass market.

“This will create a real problem for consumers. In 2030, (when British car buyers will be banned from buying new internal combustion engine (ICE) vehicles, probably followed by major European countries too) consumers will still need to use their car and will certainly not switch automatically to public transportation or alternative transport models like bikes or car sharing. If European manufacturers can’t offer cheaper electric cars, the Chinese will,” Inovev said in an email.

Inovev said nothing much is about to change in terms of electric car technology, while premium brands will continue to launch big sedans and SUVs. Solid-state technology offers big improvements in battery range and performance, but that is unlikely to appear before 2030 to 2035. At the bottom end of the market, the Citroen Ami and Renault Twizzy are too limited in performance to generate many sales. Chinese vehicles like the Wuling Hong Guang Mini, the best-selling electric vehicle in the world, could be modified for European use.

“The conditions for a real mass development of the electric vehicle market are not yet met,” Inovev said.

Schmidt agrees that VW should try and move Skoda down-market a little bit.

“An impressive trick right now would be if VW can bring the Skoda helium balloon closer back to earth, allow VW to take up that premium pricing position and offer a profitable large-volume BEV “people’s car” with a Skoda badge on,” Schmidt said.

Meanwhile, Skoda’s first electric vehicle has been enthusiastically received and this Founders Edition will turn heads with its big wheels, illuminated grille, glossy black trim with bronze wing-mirrors, while its “crystal face” grille which lights up, wireless phone charging and snazzy interior will remind us that this Volkswagen subsidiary is no longer a cheap and cheerful value brand.

The specification is generous, and so it should be for close to £50,000, (63,000) but for that money you’d expect this big, solid SUV would have all-wheel, not just rear-wheel drive. Powered seats too perhaps. This “80” version has an 82-kWh battery and 125 kW DC fast charging ability which could get you 80% of the battery filled in 38 minutes.

Like most all-electric vehicles, the Enyaq is a terrific city car but limited on the highway. The range claim for a full battery is traditionally imaginative – the boast is 324 miles and my average over 6 home refills was 266 miles. That’s an 18% miss. Close to a shortfall of a fifth, but better than most.

On the highway the story was worse than most, but not outrageously so. I calculated that at an average speed of 75 mph, the range depleted at a 40.6% rate, giving a theoretical range of 158 miles. There’s a cheaper Enyaq with a 62kWh battery and six interior designs to choose from. There are four-wheel-drive versions. The entry-level 62kWh battery model has a claimed range of up to 256 miles. Prices start at £34,185.