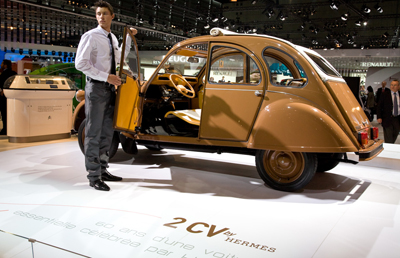 From Peasants And Potatoes To The City

PARIS – The Citroen 2CV, celebrating its 60th anniversary at the Paris Car Show, was designed to carry 4 farmers and 50 kilos of potatoes over unmade roads at up to 60 km/h, but ended up as a fashion icon notching up sales of over 5 million.

Citroen showed an old version of the car at the show, done out in Hermes fashion ware. If they revived it, I think they’d be knocked down in the rush to buy one. 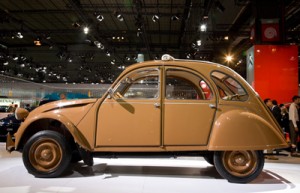 Borne out of the economic crisis of the 1930s, legendary Citroen designer Andre Lefebvre was asked to create a basic, cheap and practical car for France’s farmers. Lefebvre, who also sired the Citroen Traction Avant and the amazing, advanced, drop-dead gorgeous DS saloon, borrowed innovations from the aircraft industry to make the car’s body light and relatively strong.

The 2CV was scheduled for launch in 1939, but the Second World War intervened. Citroen was said to have buried the prototype cars and designs to make sure the invading Germans couldn’t use the vehicle in their war effort. As it turned out, the Germans were quite adequately supplied with transport to move potatoes, amongst other things. 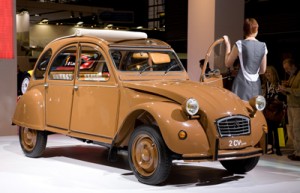 The car was finally launched 3 years after the end of the war – in October 1948. Citroen sold 5.1 million versions of the car until production stopped in 1990, and the range swelled to include two-door versions, vans, pickup trucks, an all-wheel drive front and rear powered derivative, and a convertible (or at least a version with a canvas roof which could be rolled back). Its lack of performance wasn’t a problem in many rural areas of France, because bad roads meant high speeds were impossible anyway. Later versions speeded up a bit.

Over the years, the 2CV moved out of the countryside and into the city, where its quirky looks, made it a favourite among young people seeking cheap, cheerful, reliable and eventually fashionable transport.

The 2CV or Deux Chevaux, originally called the Toute Petite Voiture, had extraordinarily flexible suspension which allowed it to go off-road. Part of the design specification also called for the car to not only reach 37 mph on unmade roads, but for the suspension to be able to carry a farmer’s eggs without breaking them. The trend-setting independent suspension connected the front and rear units to allow unprecedented wheel flexibility for good ride quality even over the worst of surfaces.

The original 2CV was powered by a flat, twin-cylinder, air cooled engine driving the front wheels, and used the body to add strength to the vehicle, like an aircraft. The original design called for the use of much aluminium and magnesium, another aircraft-like innovation, but this proved too expensive so steel was substituted. The first versions only had hand-powered windscreen wipers. 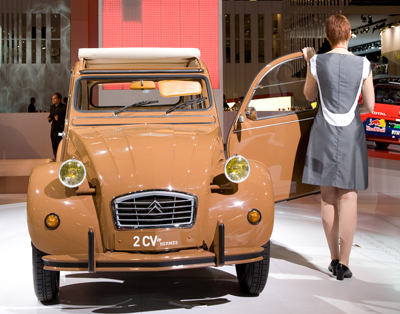 Citroen built up a reputation for brilliant new ideas in the twentieth century. The Traction Avant in the 1930s was the first front wheel drive car. The marvelous DS in the 1950s introduced aerodynamic styling, disc brakes and “hydropneumatic” suspension which replaced the metal springs of conventional suspension with a hydraulic system using liquids. Unfortunately, the company was less impressive at making profits, and was taken over by Peugeot in 1976.

Founded in 1919 by French industrialist André-Gustave Citroën. Citroën was the first mass-production car company outside the USA and pioneered the modern concept of creating a sales and services network that complements the motor car. Within eight years Citroën had become Europe's largest car manufacturer and the 4th largest in the world.