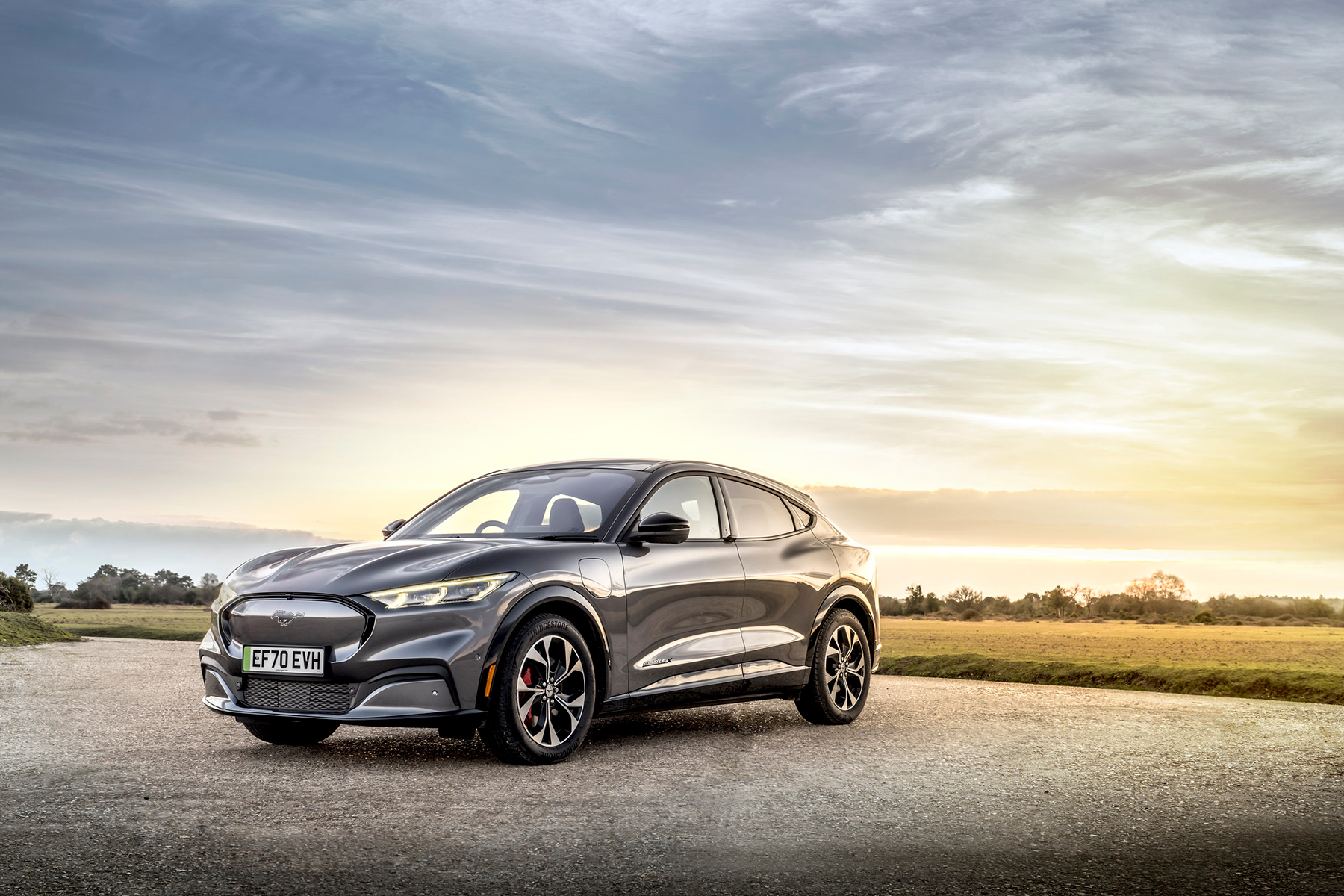 ‘“Active”, “Whisper” and “Untamed”. Despite the dramatic names, nothing seemed to change much in any of the settings’

I’m not sure why Ford’s excellent Mach-E electric SUV carries the additional Mustang name tag, but it does provide an excuse for an attractive horsey badge front and rear, plus when you park at night it contrives to briefly shine a wild horse image on the ground next to the driver’s and front passenger door.

And in what is often a grossly expensive section of the market, prices don’t take your breath away. This rear-wheel drive Standard Range version starts at £42,530 and the car I drove with a special white paint job was priced at £43,680 after tax and before government handouts. 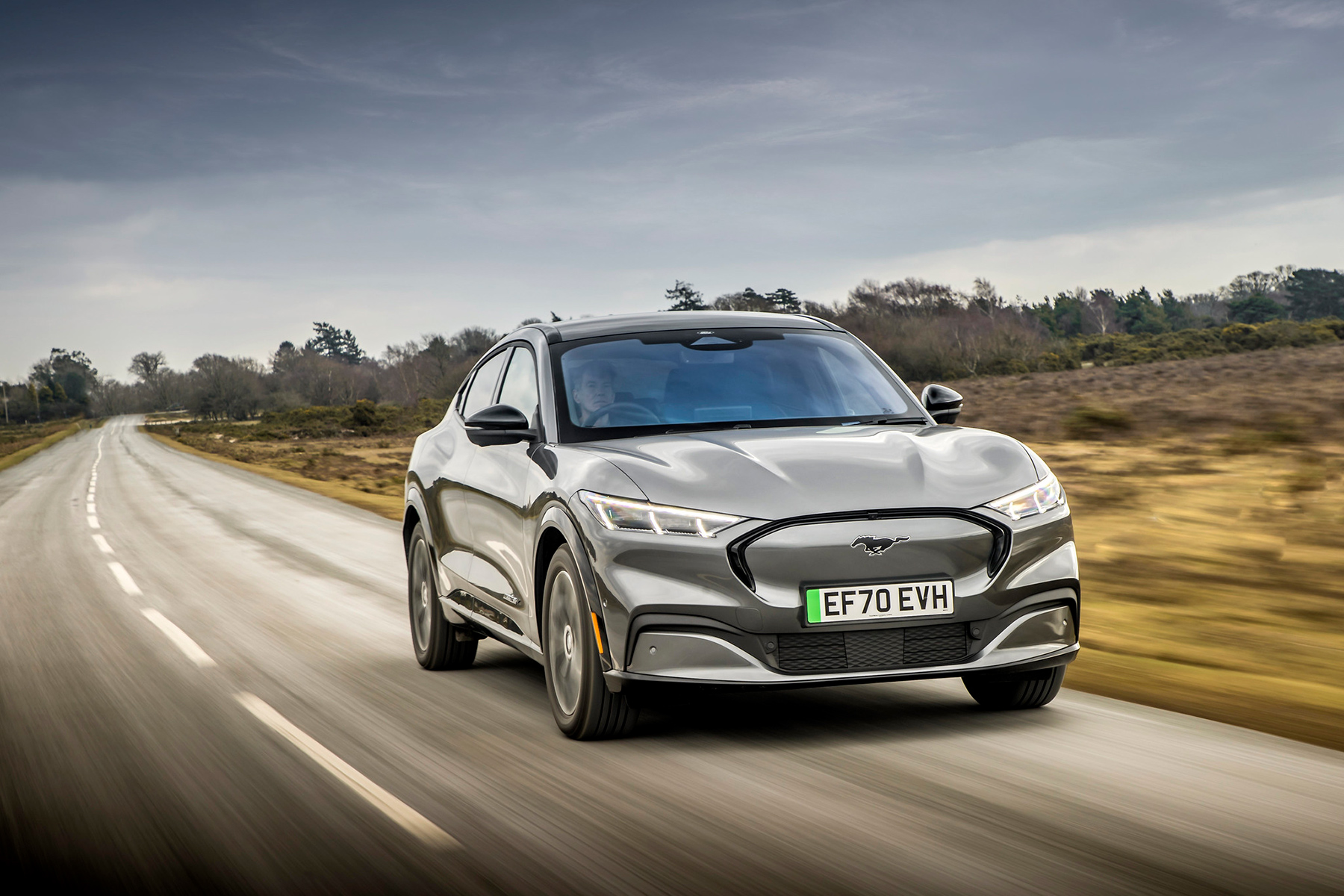 The range claim is 273 miles, and I managed an average of 224.8 miles after six home charges. Weirdly, the initial charge was 246 miles in very cold weather, and as the temperature gradually got milder the available range declined, dipping to 216 miles once. Aren’t electric cars’ batteries supposed to lose range as it get’s colder, not milder?

On the highway and in the fast lane at an indicated 75 mph you won’t be surprised to learn the range fell away at an alarming rate. The indicated range on this version with a smaller battery was clobbered by 36.2%, roughly comparable with the Jaguar I-Pace, exactly the same as the MG ZS, but much better than the Polestar 2’s 59%. 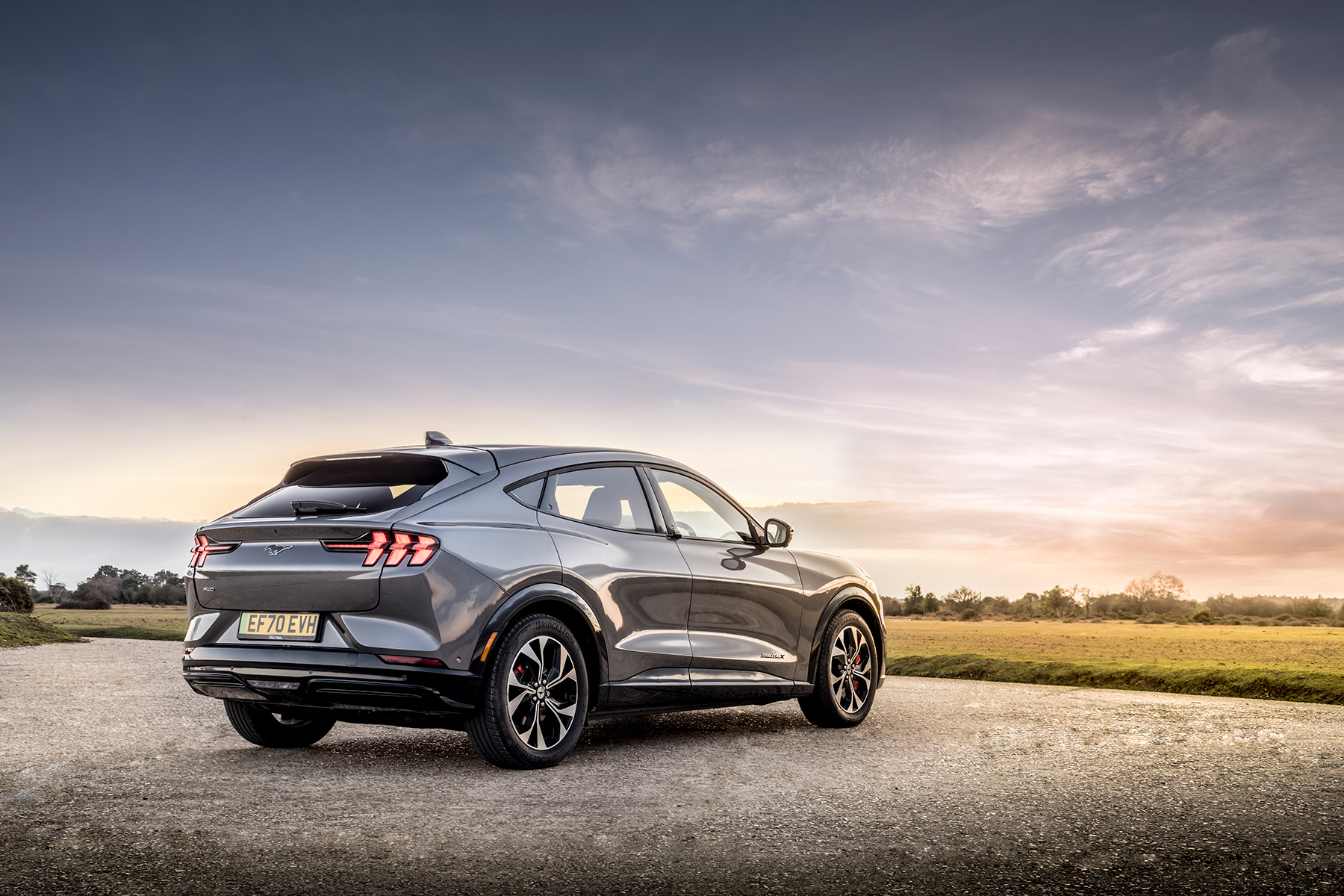 Range no problem off motorways
But if you keep off the motorways, the Mach-E performs well, aided by the excellent regenerative braking system which I had set at “pedal” driven, which sets off engine braking when you lift off the accelerator. On one typical cross-country journey of mainly 60 mph maximum rolling country roads and limited dual-carriage way driving, the Mach-E over 52.1 miles only removed 49 miles from the availability indicator. The return leg of 48.6 miles removed 46 miles. But it doesn’t like hills very much. My 16.8-mile test run which ends up on top of the South Downs at Devil’s Dyke removed 30 miles, but only 14 on the way back. City driving showed real miles consumed steadily ahead of available ones.

The Mach-E is impressive to look at and has its share of gimmicky gizmos. The normal door handles have been removed and you have to press a little button which then automatically opens the door slightly, then you takeover. The interior was high quality and classy and is dominated by a gigantic 15.5” screen mounted in the middle of the dashboard. Therein lies the key to setting things like “pedal” driven or not, and settings “Active”, “Whisper” and “Untamed”. Despite the dramatic names, nothing seemed to change much in any of the settings. 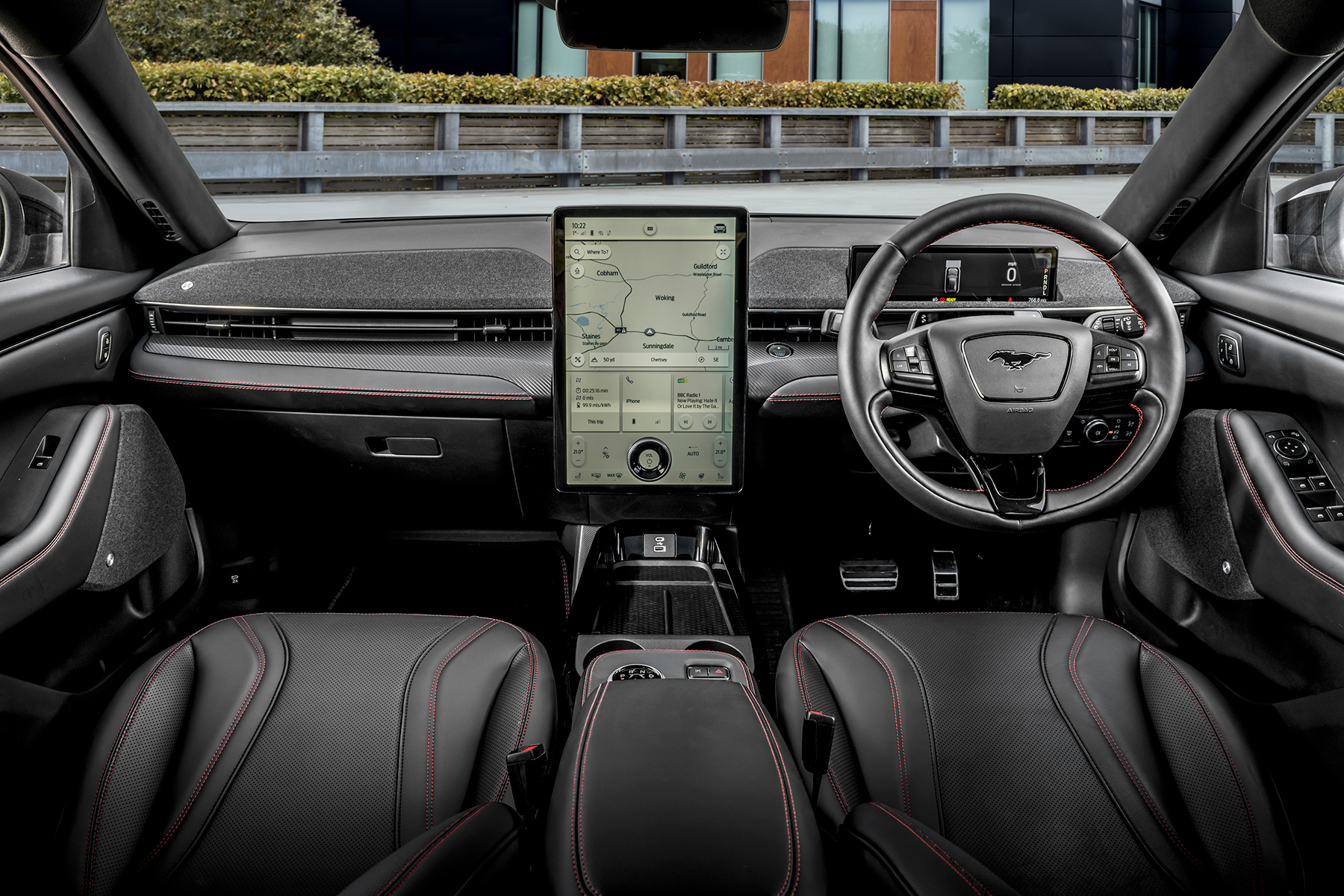 On the road the Mach-E was excellent with neat, tight steering and effective suspension which was on the harsh side, which is where I like it to be. The Mach-E range offers a single-motor rear-wheel drive like this one or dual-motor all-wheel drive. Performance was excellent, with all the acceleration you’d ever need, even in this cheaper, less powerful version. There is much technology on offer from systems which learn your behaviour and make recommendations. You can use your smart-phone to take over from the key-fob and initiate heating and demisting while you finish your breakfast, smug and cosy indoors. Over-the-air updates promise improvements in your vehicle during your ownership. 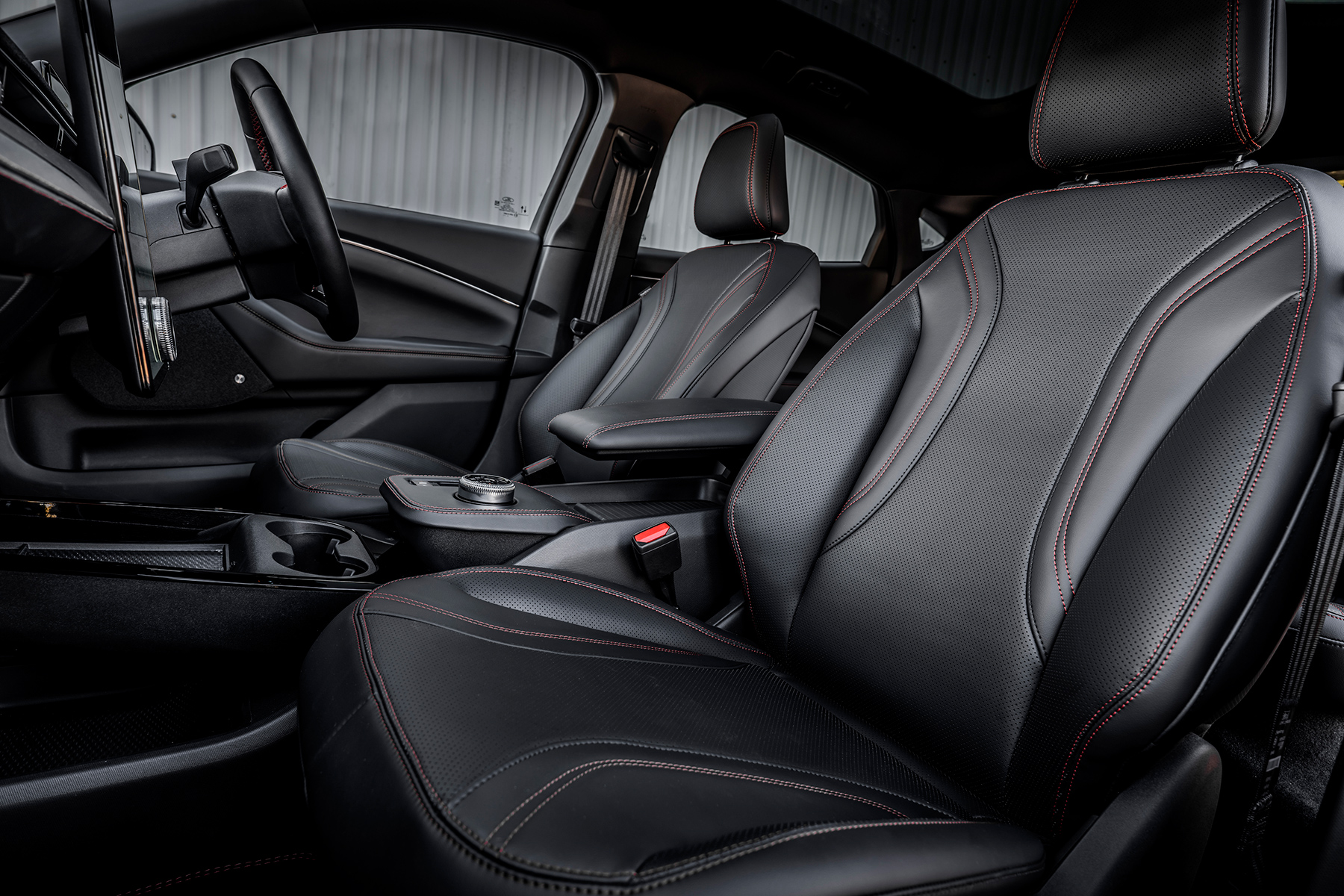 What to buy?
The Mach-E is an excellent SUV, even though this version only has rear-wheel drive. It has to compete with a huge range of tasty motors. The Ford is very well priced though which gives it an edge. At the lower end of the price range is the MG ZS. Other competitors include the VW ID.4, Volvo XC40 Recharge, Tesla Model Y, Kia-EV6, and Mercedes EQA. If the Tesla Model Y is anything like its sibling the Model 3, that is going to take some beating. It’s getting to be a bit of cliché to say the Mach-E is fine, range-wise, until you get on the highway, but until the technology improves, that is going to be the electric vehicle’s cross to bear. The Tesla comes out ahead despite also losing a lot of range at high speed because the battery is so big compared with the others there’s plenty of miles left if you start out with the version with a theoretical 360-mile range. But they are in reality still very expensive city cars. 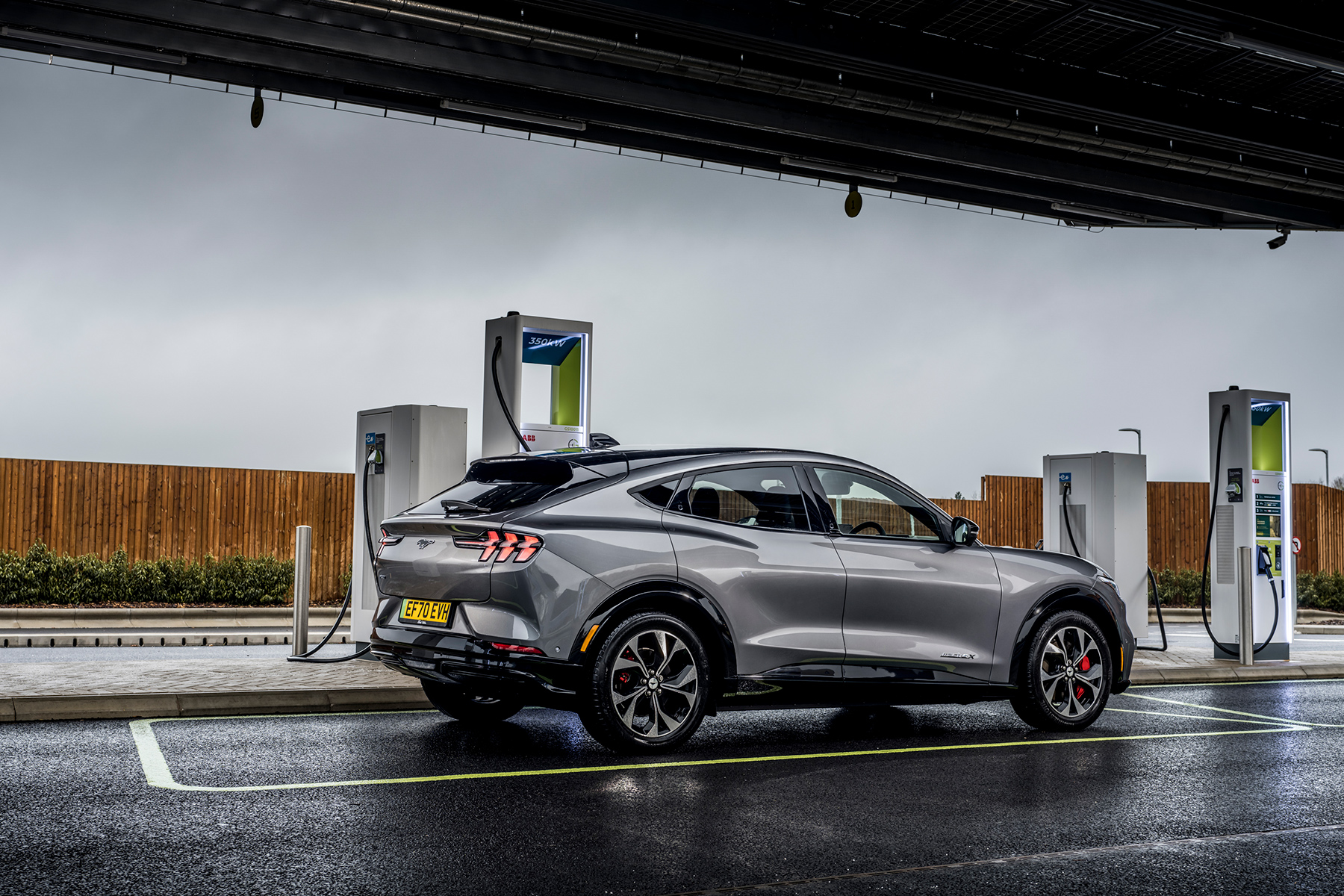