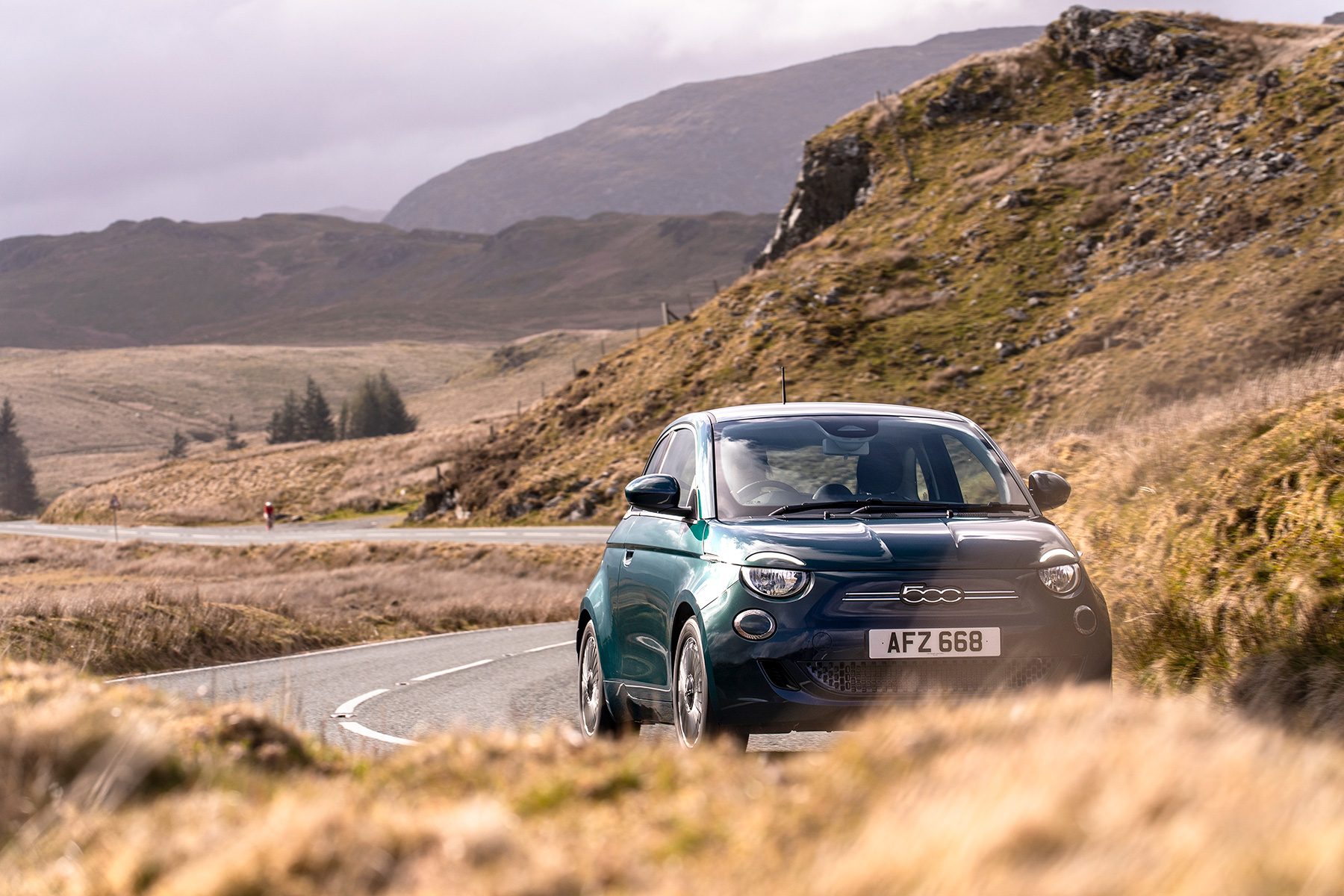 The Fiat 500e is tiny, and its battery delivery is tuned for maximum performance in town. On my urban test route over 22 miles, the 500e removed only 18 miles from range availability, thanks to the terrific regenerative braking system. That’s the good news. Unfortunately, part of the definition of a city car in my book is affordability. And the 500e fails this one miserably, tipping the scales at £33,882, although that included over £3,000 worth of extras, and doesn’t include the government handout which at the time of writing was £2,500. 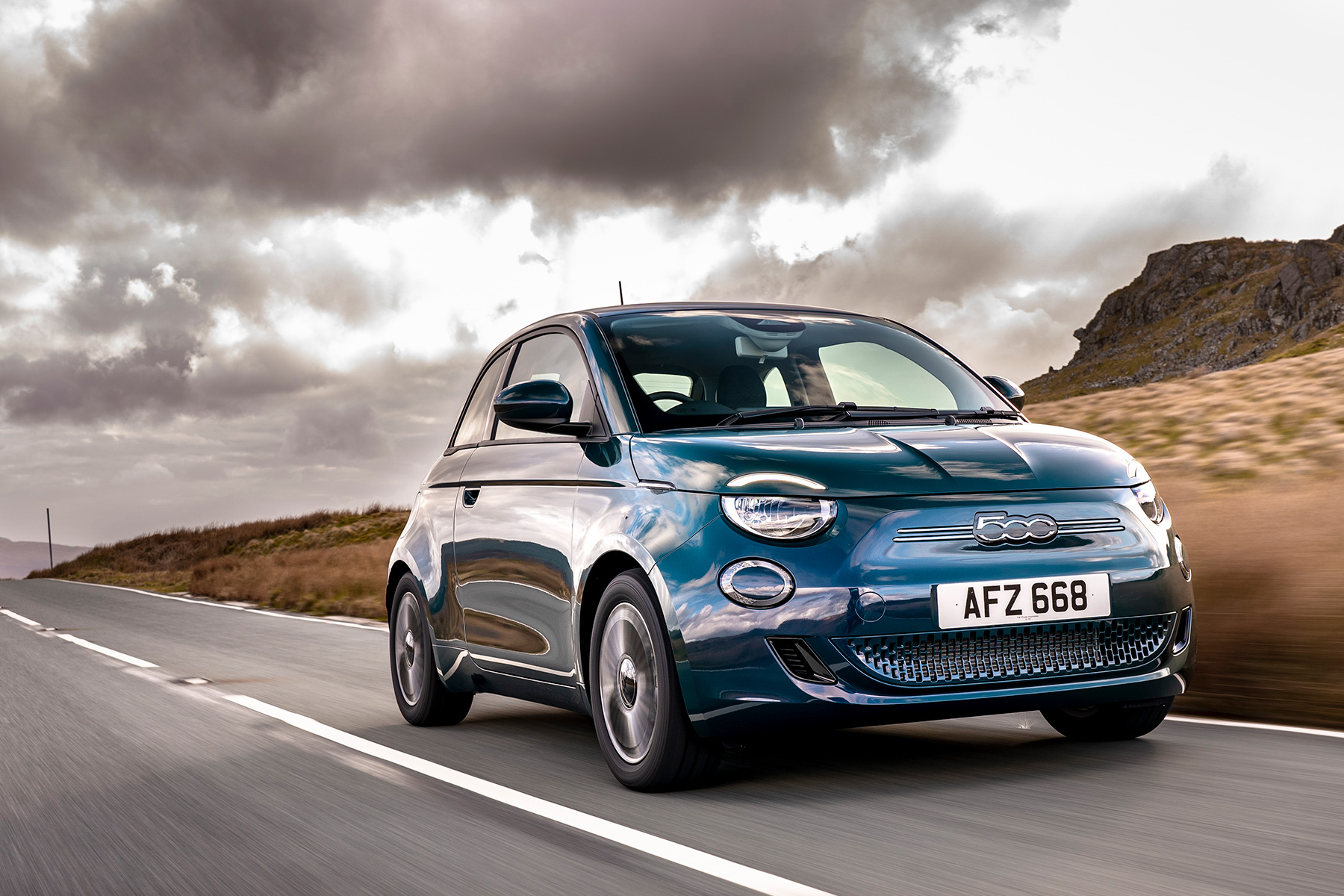 There is a cheaper version, the Action, with a smaller 24 kWh battery, 115 miles of claimed range, costing “from” £20,495, before the subsidy. To my way of thinking, that’s still about twice as much as an entry level electric vehicle should cost, but it’s certainly progress.

The 500e Icon didn’t perform well on my out-of-town, rolling-hills and not-motorway section either, where I’d expected the regenerative braking to be very effective. I scored ratings between 62.9% and 79.1% of the claimed range availability in this category. The motorway cruise mode was 52.5%, but it’s unfair to mark down a car like this, clearly designed for urban driving or seafront posing, not on routes used by corporate reps or those escaping with the family to the Italian villa. But it also has to be said the car’s ability to bomb along the highway at legal cruising speeds was very impressive. It felt very stable and secure and the accelerator response was instant at any point in the speed range. It’s just a fact that this won’t last very long.

The battery delivered a relentless 161 miles of available mileage from the charger at home except for the first time when it managed 173 miles. 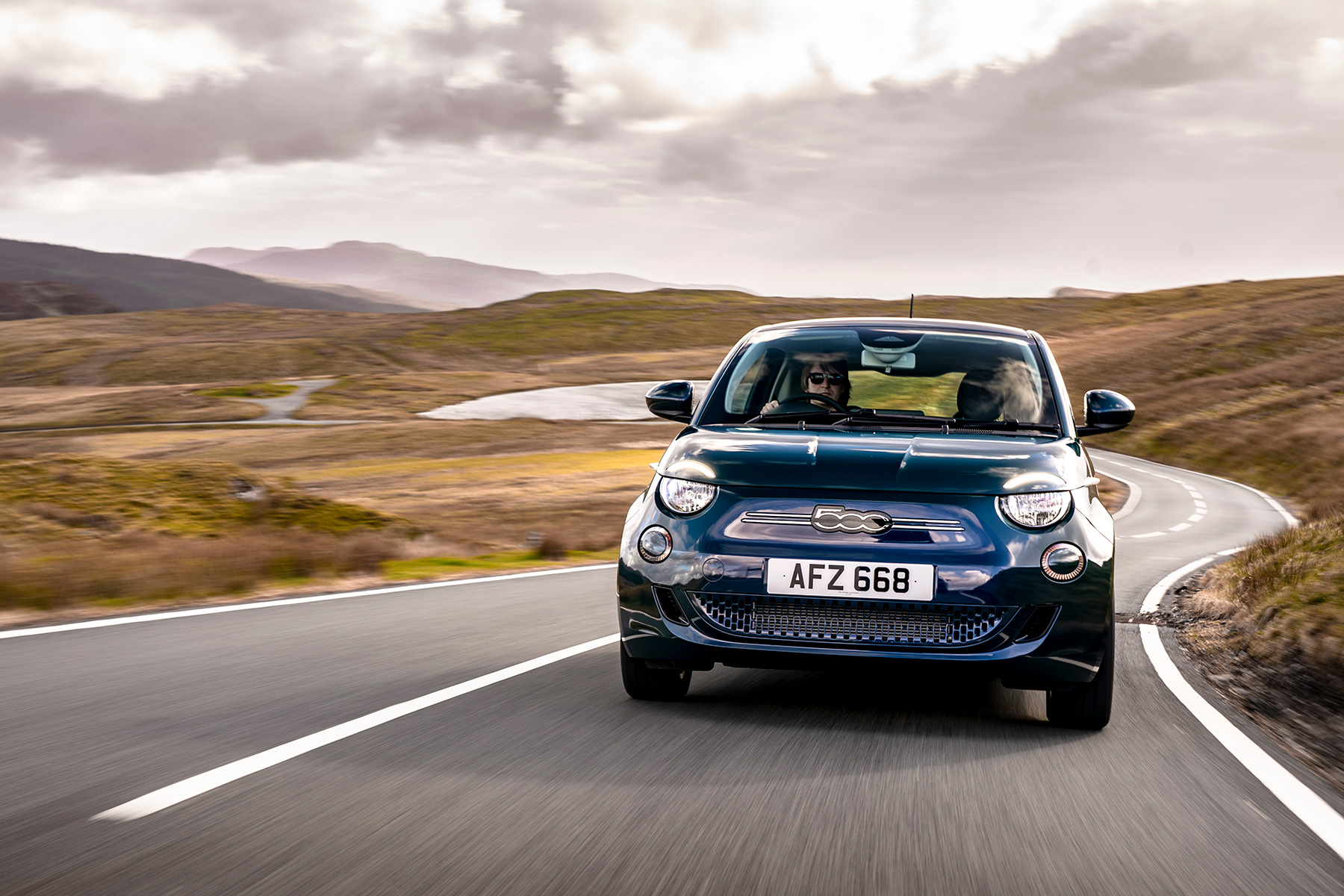 Top notch comfort
The suspension was very firm, and although the car looks tiny, the comfort for the driver and passenger was top notch. The fabric roof moves back at the touch of a switch and has two choices – one as a huge sun-roof, and the 2nd right back including the rear window, but still leaving the cars frame intact above the windows. It closes shut with a very satisfactory loud click. This felt very secure until on one journey on a rolling country road after a heavy storm, in sun-roof mode, I was involved in a momentary, scary situation. I was following a truck to the bottom of a hill. The truck hit a huge amount of trapped water which I couldn’t see at the same time as big van coming the other way did as well. This triggered what seemed like a mini tidal wave engulfing this little car which raised my blood pressure for a moment or two, but didn’t set off the auto wipe mode. Order was quickly restored. 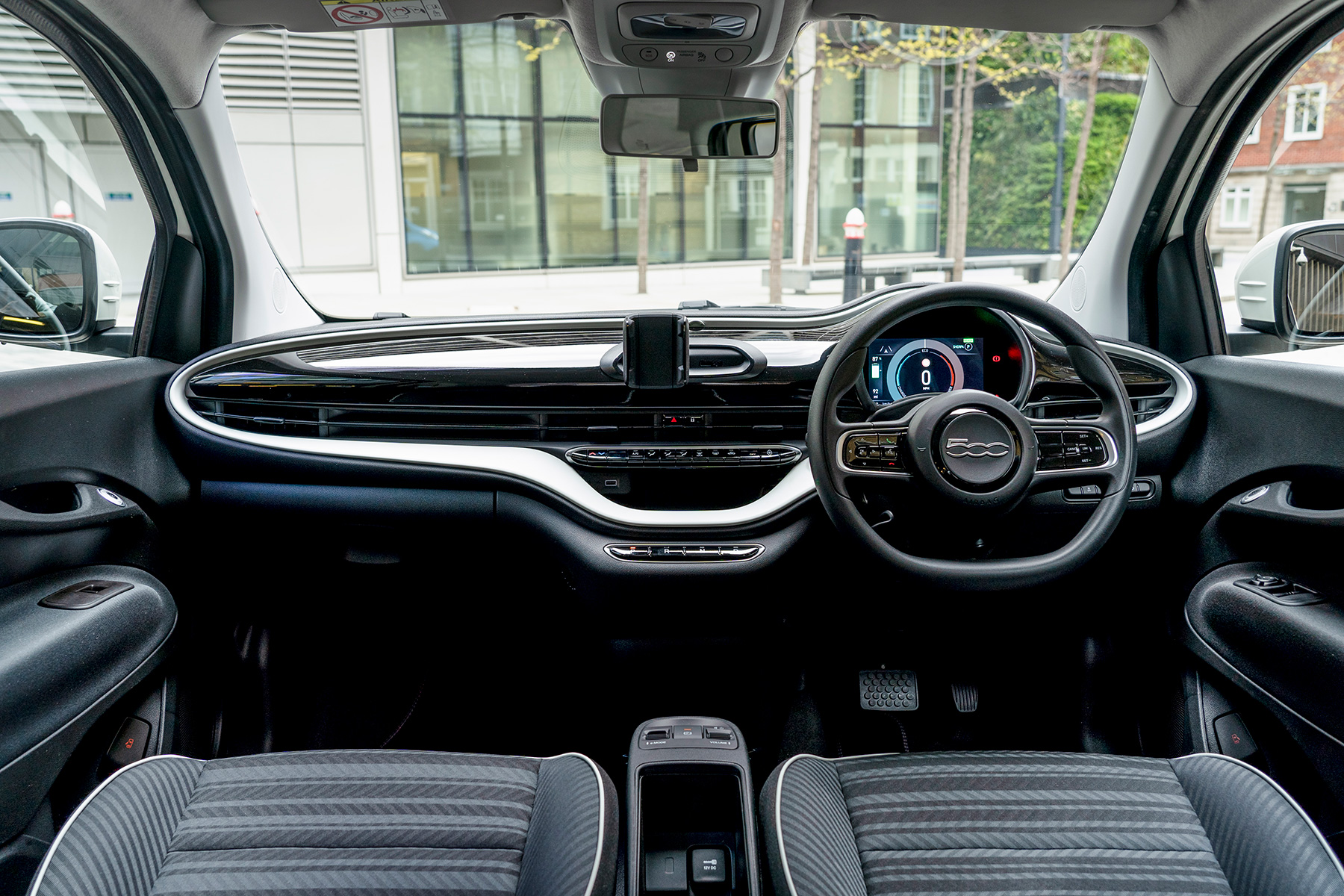 The 500e had the de rigueur huge screen, but I found the data read out to be too small and difficult to read. I managed to fire up the satnav for one trip but failed to repeat the performance. After switching on, you select P, R, N or D from big buttons in the middle of the dash, and off you go, if you select R or D. Fiat calls this a 4-seater, but come on, really. And the boot is tiny. I took a look at the available luggage space and cancelled my golf games for the week. I probably could have got the stuff in the car if I’d removed the roof, but…….

Fiat says the 500e is its first designed from the ground-up to be fully-electric. There are 3 driving modes – Normal, just like a regular automatic transmission – Range ‘one-pedal’, with acceleration and deceleration controlled by the accelerator (which I used all the time) and Sherpa, which can be engaged if you start to worry there’s not enough juice left in the battery to get to your destination. This is combined with the SatNav, if you can turn it on.

One of the reasons this car is pricey is the plethora of computerized safety aids. I didn’t expect to be subjected to the little tugs on the steering wheel when the computer decides it doesn’t really like what you’re doing, but they were definitely there. The 500e range is available in four versions – Action, Passion, Icon and La Prima. 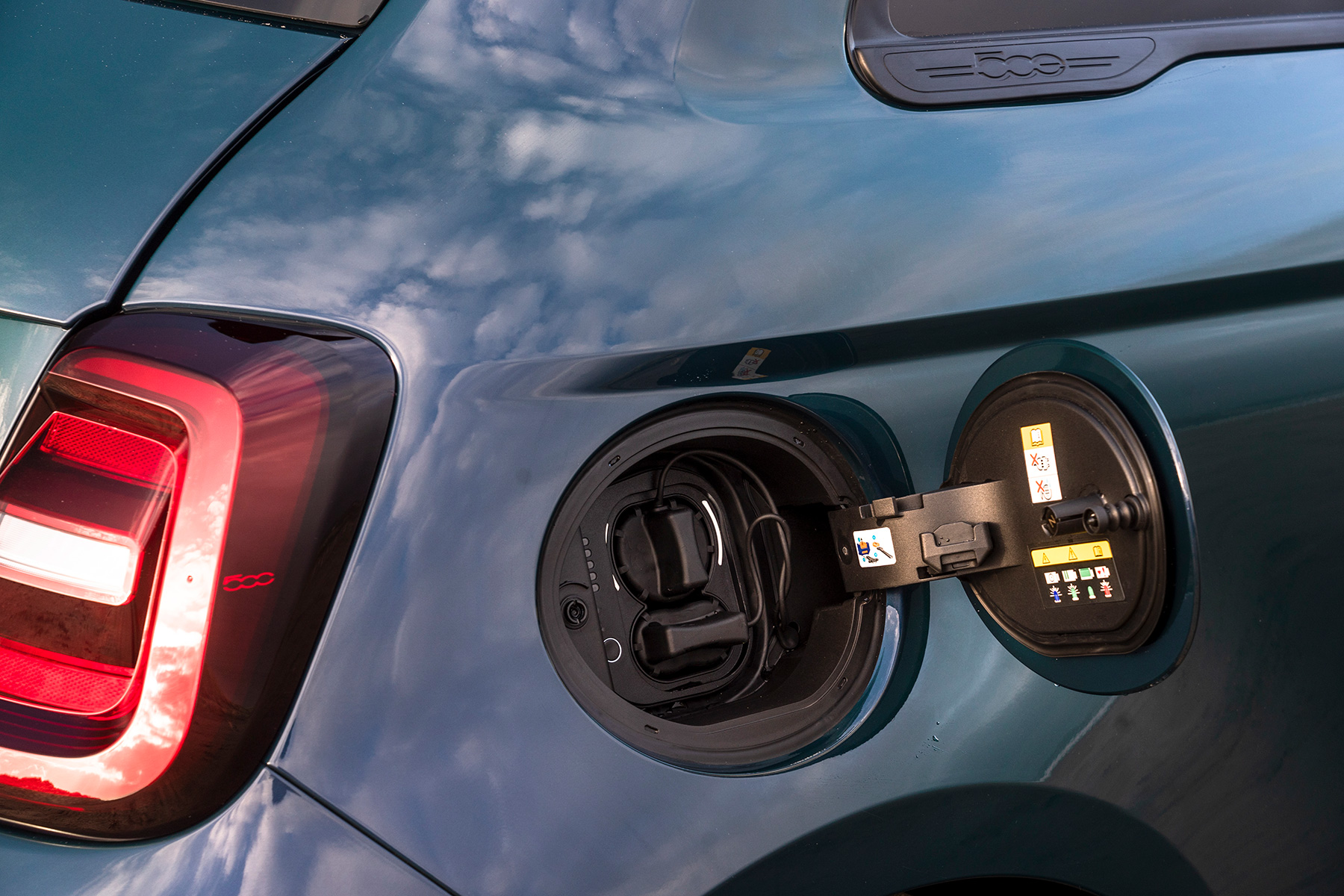 What to buy?
Regular readers will know my theory that the automotive industry is relentlessly moving in the wrong direction with its electric car policy. It is busily making electric cars which seek to be as flexible as internal combustion engine (ICE) ones. But it makes bloated, hugely expensive electric vehicles with massive batteries to try and compete on range. Bigger batteries mean a bigger CO2 penalty, so this is self-defeating. A successful electric car revolution requires a less ambitious but cheap as chips little car with small batteries selling for less than £10,000 which won’t require government handouts to sell. Range of say 100 miles, top-speed 60 mph, great for the school run, shopping, commuting. The Fiat 500e will make a terrific town car for somebody with loadsamoney, but it fails in the value for money race. 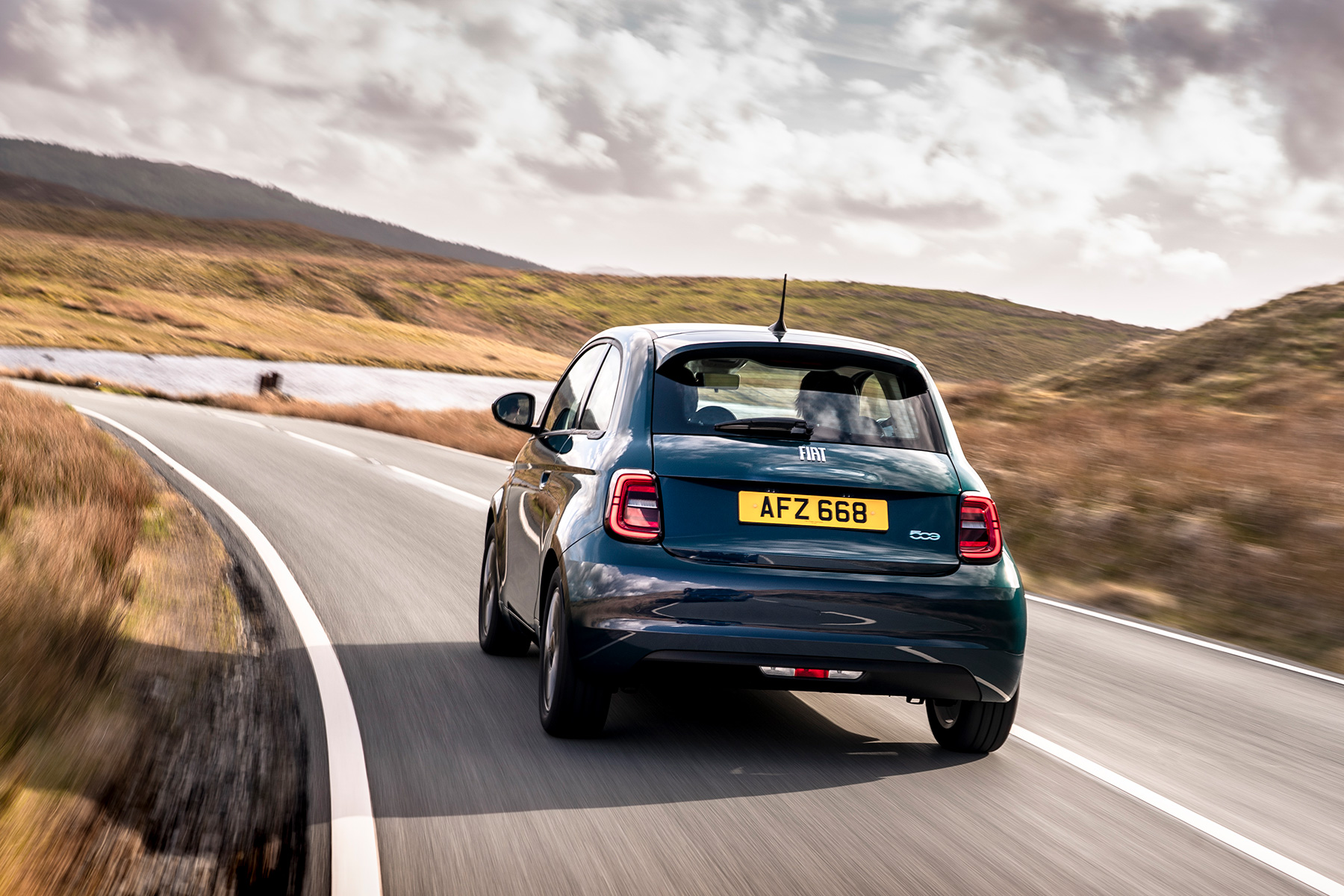 IAA Promises With Impressive Concepts, But Not Much For The Car Buyer
Fiat 500 e