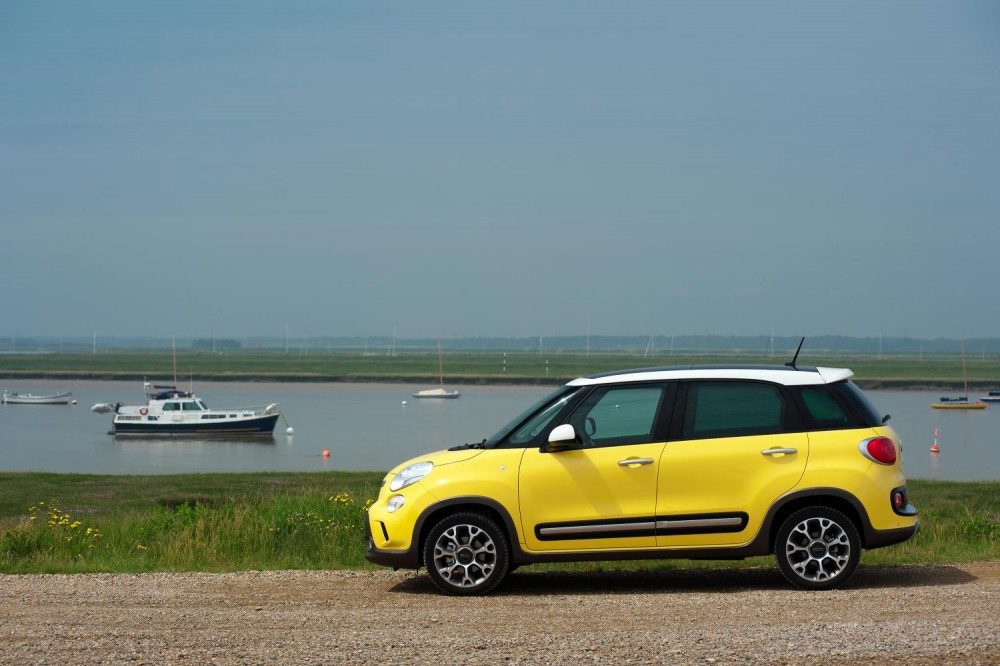 No All-Wheel Drive, But Looks As Though It Might Go Off-Road.
City Brake Control Cuts Accidents, Gives You Lower Insurance Costs.
Wouldn’t You Want An Espresso Machine On Board?

Fiat is cleverly building on the success of the cute little 500, the retro-styled city-car, by offering bigger four-door versions labeled “L” for Living. (not Long, as I’d mistakenly assumed.)

Now Fiat has added the Trekking and the MPW (Multi-Purpose Vehicle), and the first thing you’ll notice is that how the bigger girth and dimensions completely undermines the cute factor. To avoid any accusations of sexism I won’t make the obvious comparison with any Italian institutions. Mind you, the MPW replaces the Multipla, which reached new highs of in yer face ugliness, so perhaps I should give a little credit. 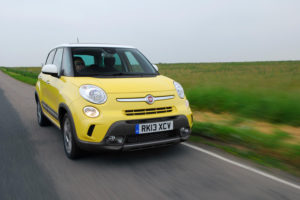 The 500L Trekking has a distinctively rugged look. It’s higher than the 500L and has a special traction system to at least mitigate the fact that it’s not four-wheel drive. If you’re gagging for a four-wheel drive 500, there’s one coming next year called the 500X. If you’re holding your breath for a new and restyled Bravo or Punto, give yourself a break because there’s no sign on the horizon. They may have breathed their last.

The 500L Trekking sits at the top of the 500L range, above the Pop Star, Easy and Lounge models. It includes features such as cruise control and touch-screen infotainment. The 500L Trekking is the first Fiat to feature City Brake Control as standard. This system prevents or lessens damage in low-speed collisions by automatically applying the brakes using laser beams. You get a big insurance premium reduction, so this is no gimmick. The Trekking also has Traction+,  which improves grip off-road. 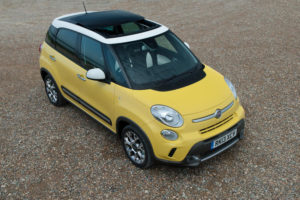 The 500L Trekking sits 10 per cent higher than the regular 500L, while grippy Mud & Snow tyres complete the package. Standard equipment includes air conditioning, 5” touchscreen radio with Bluetooth, and Cruise Control – already standard on other Fiat 500L variants – plus 17” alloy wheels, dark tinted windows, City Brake Control and Traction+. There’s a sliding 60/40 split rear seat with space for three passengers. The rear seat boasts the Fold & Tumble function, which gives a perfectly flat load space from the tailgate to the rear of the front seats. When paired with the folding front seat, the 500L Trekking can carry loads of up to 2.4 m in length. That’s almost eight feet. Rear parking sensors are standard.

Espresso on board
Media players and phones can be connected via Bluetooth, as well as through the USB port or the AUX-IN socket. An optional satellite navigation system can also be specified to operate with Uconnect.

You can specify an espresso coffee machine fully integrated into the centre console, in collaboration with Lavazza.

The MPW is a bit longer than the Trekking and has a 638-litre boot. There’s an optional third row of seats giving a five-plus-two layout. You can carry seven, have a massive load area, or a combination of the two.  A choice of three engines is offered with the 500L MPW: the 0.9 TwinAir Turbo 105hp petrol unit, plus the 1.3 and 1.6 MultiJet II diesels offering 85hp and 105hp. The 1.3 is also available with that awful five-speed automatic. The 500L MPW has a more rugged suspension. 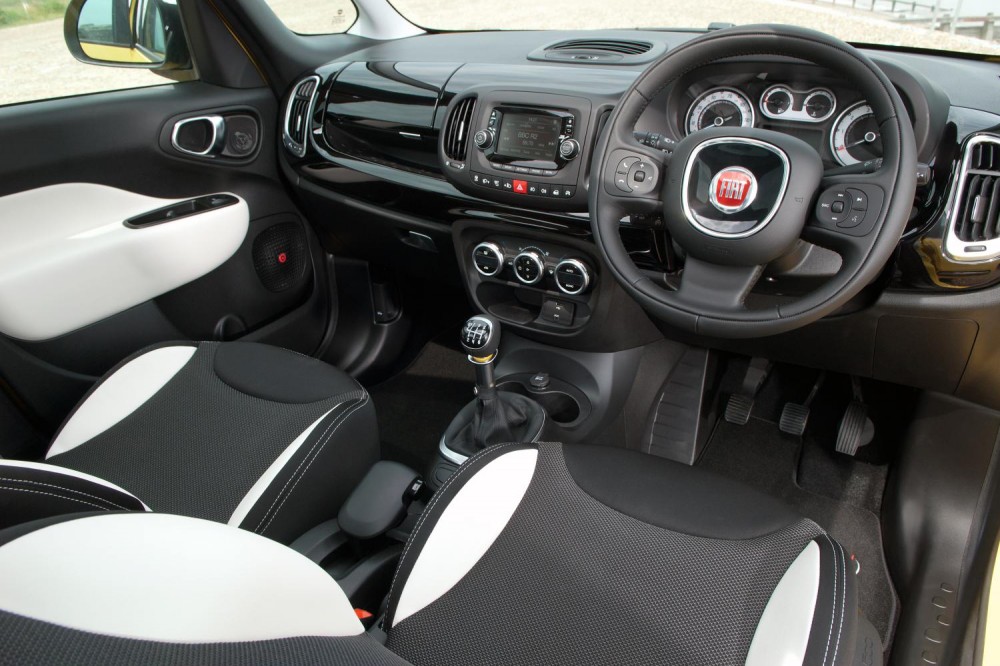 Both the Trekking and MPW have compelling cases to buy, although the prices look a little steep to me. But given that you can probably get discounts of up to 20 per cent, official prices are mere opening gambits these days. Given that most modern cars are hard to fault in terms of design and reliability, I might have to fall back on my old standby; if you’re choosing a car, you might as well opt for the nearest dealership (excluding French cars of course). It so happens that there’s a Fiat dealership about 500 yards from me. If I ever buy a new car, I’ll at least start there. 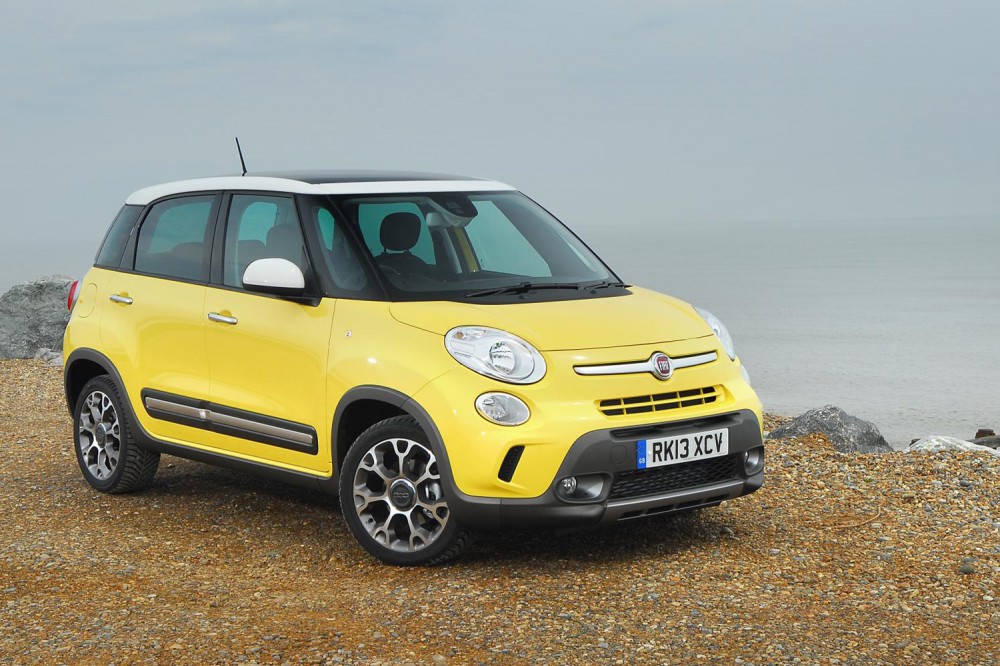