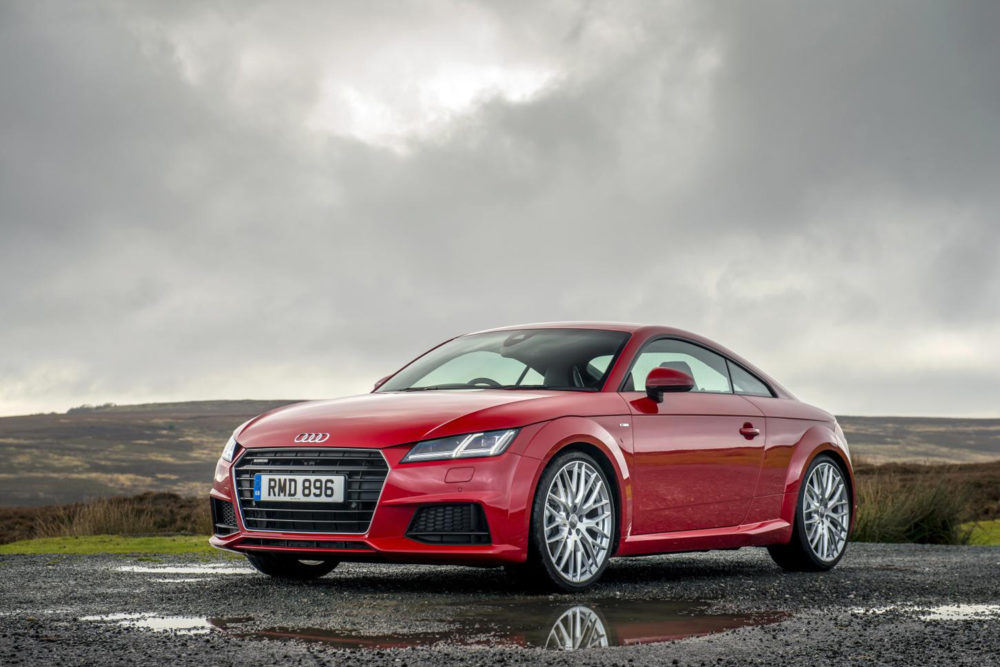 “Perhaps the four-wheel drive option would be the main differentiator”. 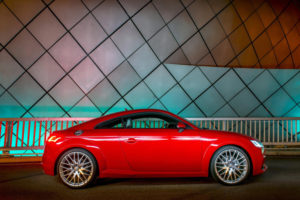 Given that the competition are driver favourites like the BMW Z4, Porsche Boxster and Mercedes SLK, the Audi TT is going to need more than technology gimmicks to make the sale.

The original retro-styled TT was launched in 1998, renewed in 2006, and relaunched here in Scotland. The new one closely follows the looks of the previous model.

At launch, the TT is equipped with either a 2.0 litre, four-cylinder 227 hp gasoline motor, or a 2.0 litre four-cylinder 182 hp diesel. Prices start at £29,770. Expect hotter, more expensive versions, and maybe a plug-in hybrid one day.

The TT will compete with the Mercedes SLK and the BMW Z4. Top end versions will come up against the Porsche Boxster and Cayman. 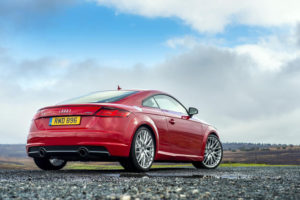 The TT’s digital virtual cockpit is based on a 12.3 inch LCD display which fills the driver’s instrument binnacle, and replaces traditional analogue dials. Drivers can choose between two display modes; “classic”, in which the speedometer and rev counter are in the foreground, or “infotainment”, when the speed and rev counter are smaller, and things like the sat-nav take prominence. Warning and information symbols including current speed limit, outside temperature, time and mileage are permanently visible.

Another first for Audi is the incorporation of the air conditioning controls into the vents themselves. Of more interest to the enthusiastic driver, are standard sports suspension, xenon headlights, LED daytime running lights and speed-dependent active rear spoiler. Front-wheel drive is standard too. Four-wheel drive is an option.

Aluminium and steel
The new TT boasts an improved aluminium and steel construction body which is about 110 lbs lighter than the predecessor. It is a shade longer and is the same height. The 228 hp engine propels the manual gearbox, front-wheel drive car from rest to 60 mph in just under six seconds. The four-wheel drive version with a six-speed automatic gearbox is even quicker to 60 mph. I drove this version along the banks of Loch Lomond, and very tasty it is too. When you put your foot down, the exhaust is primed to bellow, which seems a bit out of context for what is a very civilised and comforting machine. The car’s design has developed nicely over the years, becoming simpler and cleaner, which isn’t usually the case with third generation designs, even successful ones like this. 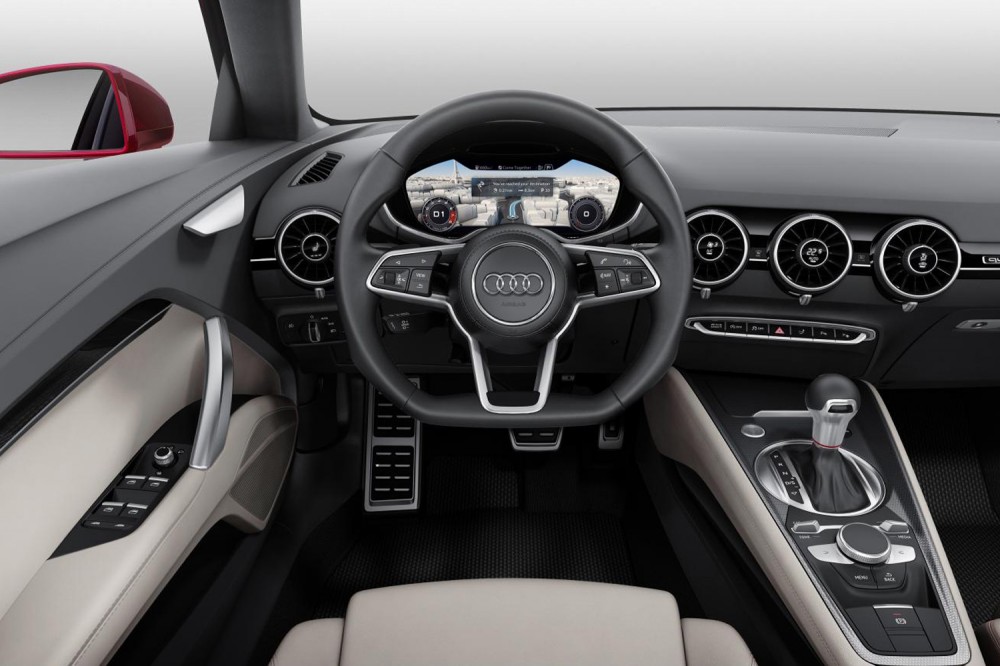 Comfort and Sound
Two specification levels – Sport and S line – will initially be offered and both include the Audi virtual cockpit. The car I drove, the 2.0 TFSI quattro S line, isn’t cheap, with prices starting at £34,545, but this one was loaded with extras bringing it up to £45,335. These included the Comfort and Sound package – £1,590 – stereo, aircon, and auto parking – and the Technology package – £1,795 – navigation and phone system. Electric front seats costs £995. One item staring back out at me says – Advanced key – £455. If I was paying that kind of money, I would really have to be convinced I’d made the right decision. Could Audi really fight off competing offers from BMW, Porsche or Mercedes?

A portfolio of advanced electronic aids is available. Audi side assist uses rear-mounted radar sensors to help drivers change lanes more safely; camera-based traffic sign recognition can alert the driver to speed limits even when they have been temporarily imposed; the park assist system with display of surroundings independently guides the car into suitable spaces; and the Audi pre sense basic safety system takes protective action such as closing the windows and tensioning the seatbelts if sensors detect an impending collision. Audi active lane assist helps the driver if required by steadily correcting steering or warning if there is a danger of unintentionally drifting out of lane – this feature is standard for the 2.0 TFSI model and optional for the 2.0 TDI.

4×4 the clincher?
So is this all good enough to persuade would-be buyers to forsake the other German competition? It looks good, goes terrifically well, and does everything it attempts with aplomb and quality. It has somehow also shed its girlie hairdresser image, not least because of how much it now costs. Perhaps the four-wheel drive option would be the main differentiator, particular in America, where more than half the country seems to have snow-affected roads for about half the year. 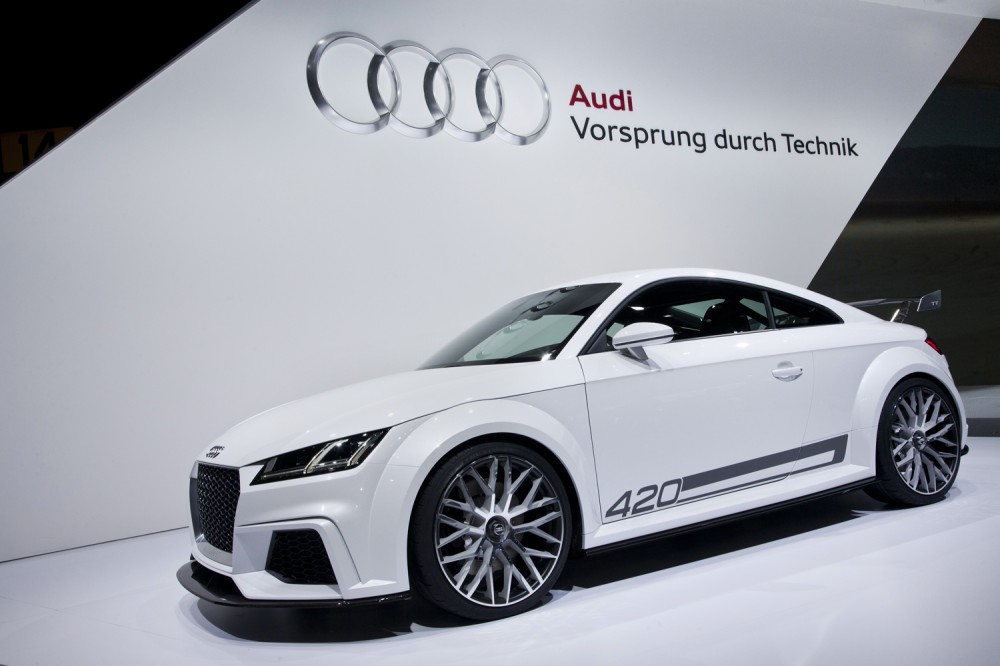