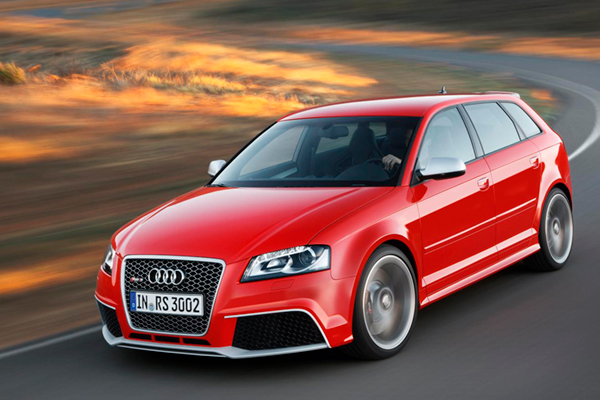 Understated That Is, Until You Floor The Accelerator, Look At The Price

Amazing Performance Coupled With Placid Alter-Ego
rating **** out of 5

For – goes like stink, great handling/road holding, high quality
Against – lots of money for anonymous looks

VELDEN, Austria – Audi’s latest little hot-rod will blast you past most everything in your path, or cosset you in luxury on the way to the shops. Apart from the amazing noise it makes under hard acceleration, the understated RS3 Sportback’s looks ensure anonymity too because it really is a hatchback rather than a fastback.

The Rally Sport version of the A3 is amazingly fast and agile. It is powered by a 2.5 litre five-cylinder in-line direct injection turbocharged petrol engine developing 335 hp. The A3 blasts from rest to 60 mph in just over four seconds and could reach 125 mph in 17.5 seconds, should you find yourself on a German autobahn, or stray on to a race track. Peak torque of 332 lb ft is available from 1,600 to 5,300 rpm, which means that if you touch the accelerator, the response is instant and massive. The seven-speed double clutch automatic gearbox pings through the gears with almost measureless time gaps. The idea is that with two clutches, the car is always ready for the next gear change, and the system will almost instantaneously move to the next one when required. You can over-ride the system by using the paddle shifters on the steering column. That’s probably one option that will gather dust. 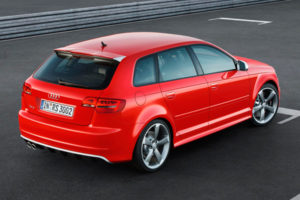 Audi launched the car in the mountains near Salzburg in southern Austria, to show off its sharp handling and almost fail-safe road holding, thanks in part to its four-wheel drive. I have no idea how this car behaves on the limit, because I’m sure I never got close to it, tearing around the mountain passes close to this pretty little resort on the western tip of Lake Woerthersee, with the locals occasionally waving their greetings, or was that a shaking fist, as the 17th RS3 blasted through the village well over the speed limit. The suspension was surprisingly pliant, given that most fast German sporty cars seem to have setups designed to loosen your fillings.

Intrusive or delicious?
Audi must have spent a substantial chunk of the development budget on the exhaust system, because the noise the car makes under hard acceleration is more like a racing car than a utilitarian runabout, which the A3 also is when the mood dictates with its hatchback set up. If you press the “sport” button, the noise becomes even more intrusive, or delicious, depending on your point of view. 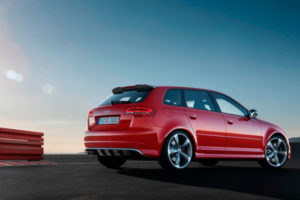 Audi has resisted the temptation to over-decorate the RS3, but it does have flamboyant carbon-fiber reinforced wings, snazzy wing-mirrors, giant front air intakes and wider front fenders. After all, in Britain this car costs close to £40,000, so owners might want to have attention drawn to the impressive depth of their wallets, or the indulgence of their company car scheme manager. But the body style sticks close to the about eight year old traditional A3 design, which is more workmanlike and understated.

Not surprisingly for that money, the RS3 is very well equipped, with wide, 19 inch wheels and natty trims. The high-performance brakes have a high gloss finish underlining the RS emblem. The seats are high quality leather, the headlights Xenon, the daytime running lights LED. There is electronic climate control, and sat-nav. You can opt for front bucket seats, roof rails in matte aluminium or styling packages in black or matte aluminium. The test car was priced at £38,705, but with the Bose sound system, cruise control, adaptive headlights, electric front seats and privacy glass, plus a few more goodies, the price peaked out at £43,225.

Neat
The interior is typical Audi – high quality/lack of flamboyance – with the new Aluminium Race look (if that’s not a contradiction in terms). A flat-bottomed steering wheel, and an exclusive design for the instruments and gear selector lever look neat, as does the so-called Driver Information System, which displays boost pressure and oil temperature, and doubles as a lap timer.

The current A3 only has just over a year of life left in it before it is redesigned, so that might have persuaded Audi not to send this version to America, although the concept – small car, massive performance, huge price – probably wouldn’t go down well. The new design due next year is also typical Audi, with the latest version looking just like an updated er A3. The formula seems to work. 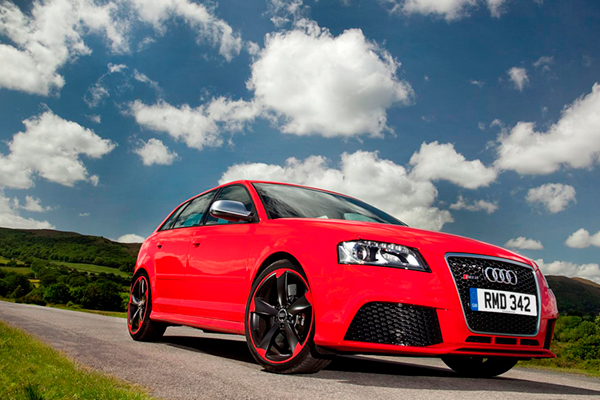 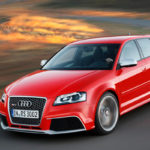 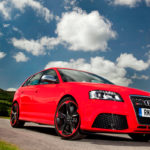 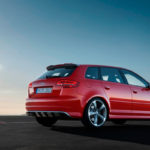 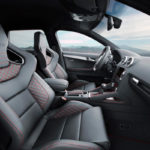 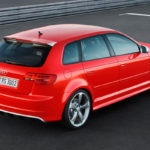 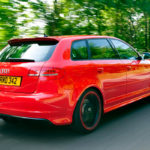