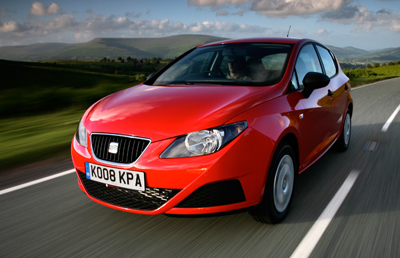 You Can Plug In Your Tom-Tom When It’s In Hill-Hold Mode.

New Jazz Likely To Retain Lead As Number 1 Supermini.
**** out of 5

Volkswagen has transformed Skoda, its Czech brand whose claim to fame used to be for staffing its factories with political prisoners, into a respectable and intelligent choice for budget car buyers who want rugged utility rather than fashion.

VW’s other budget brand, SEAT, has yet to find the same degree of success. It can’t help to have a name like SEAT, which with the best will in the world will still mean to the general public something you sit on, rather than the acronym for Sociedad Espanola de Automolives de Turismo. VW bought SEAT of Spain from Italy’s Fiat in the mid-1980s.

According to automotive consultancy Global Insight, VW will be casting a jaundiced eye on its brands, which also include upmarket subsidiary Audi, now that its fortunes will be decided by new owner Porsche. 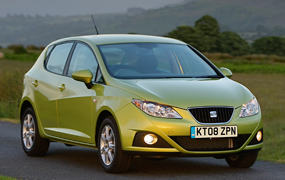 “It is not impossible that there will be some rationalisation of VW’s brand strategy over the next few years, especially in light of Porsche’s takeover of the company. The ultra-luxury Bugatti brand is an obvious target to be culled while Porsche’s management may not see the benefit of VW retaining two entry-level brands in the shape of Skoda and SEAT that offer broadly similar product line-ups and price positioning; especially as SEAT’s sales have flat-lined in recent years while Skoda’s have doubled in 5 years and are on target to record 700,000 units (sic) in 2008,” said GI analyst Tim Urquhart.

So SEAT has an uphill struggle to prove its worth as a brand. Its plan to use motor sport to raise its profile among the young might work, but when you think that the average age of a new car buyer is over 50, what’s the use of a high profile among those who don’t actually buy cars?

New Polo, Audi1 in disguise
But what might actually do the business for SEAT is if the public becomes aware that it makes great cars. With the new Ibiza, SEAT will be able to do just that. 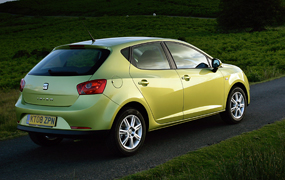 The new Ibiza looks terrific. It has an exceptionally pretty body, and a high quality interior too. It is lighter and larger than the car it replaces. Handling, ride and performance are impeccable. The Ibiza is built with the engineering underpinnings which will be used in the upcoming new VW Polo and Audi A1, and the current Skoda Fabia. VW’s South American small cars, the Gol and the Fox will also be the same under the skin. With economies of scale like this, you can expect keen prices as well; the cheapest Ibiza starts at £8,995 – €11,400.

Neat new ideas
The Ibiza incorporates some neat new ideas. On the top of the dashboard is a stand for your Tom Tom sat-nav, linked to the battery. This eliminates the need for suction caps and cables. (Later, more sat-nav devices will be catered for). The manual transmission includes a device which stops the car rolling back for 2 seconds between releasing the brake pedal and accelerating. No more embarrassing moments as you attempt to pull away on a hill and your skills momentarily desert you. The radio includes an optional Bluetooth connection, which can be activated by controls on the steering column.

At launch there are three engine choices – 1.2 litre 69 bhp, 1.4 litre 83 bhp, and 1.6 litre 103 bhp – all petrols. A diesel will be available next year. All versions have 5-speed manual gearboxes. There will at some stage be a Dual Clutch automatic gearbox. The first models will have 5 doors, with a 3-door version following this autumn. There might be a 4-door saloon aimed mainly at Spain and neighbouring Mediterranean markets next year. 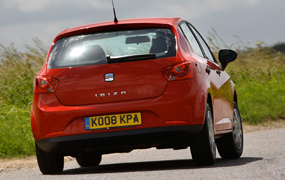 The Ibiza is a tremendous little car, which looks great and is priced to go. The trouble is, the car market is stuffed with competing products that are just as good. My favourite supermini, the Honda Jazz, is about to be relaunched with a complete redesign from the ground up. I can’t believe the new Jazz won’t be a huge improvement on the old, so it’s unlikely to be shifted from its position as king of the hill.

SEAT looked to be in jeopardy for a while, but now seems to have turned around and made some money in 2007. The company has ambitious targets, hoping to nearly double global sales to 800,000 a year by 2018.

Think how much easier that would be if the brand name was an asset, not a hurdle.