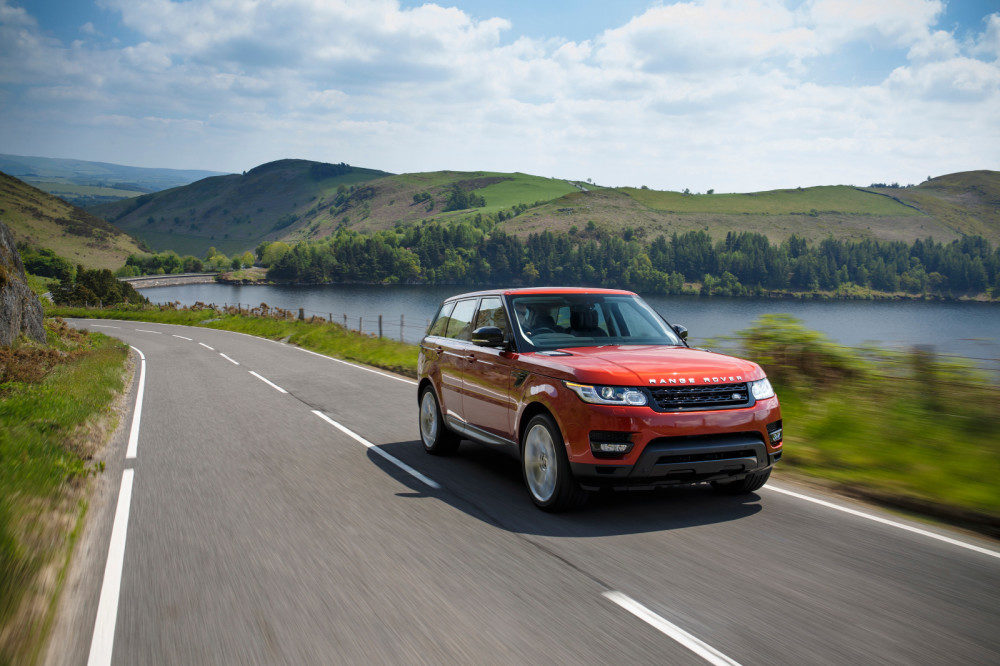 Much Weight Saved By Replacing Steel With Aluminium.

“BMW SUVs for some reason seem to get purposely uglier”.

For – magnificent beast.
Against – how much less would it cost if you eliminated the stuff you’ll never, ever use?
***** out of five

CHELTENHAM, England – I’ll make it clear right from the start. Of all the cars I’ve tested over the years, the Range Rover Sport is my favourite. After driving the new, it still is.

The serenity of its ride, the commanding view of the road from on high, the luxury feel of the interior, and the cockpit wrap-around driving position, add up to a wonderful experience. Sure, the diesel-powered versions weren’t exactly goers, but the more powerful diesel now has bite as well as slightly better fuel economy. The new Sport is even better than the original. 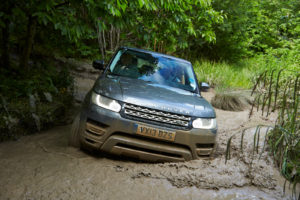 And when you look at the mainly German opposition, the Range Rover Sport stands out as handsome and attractive, while BMW SUVs for some reason seem to get purposely uglier. The big Audis are bland. Mercedes latest styling advances might trickle on down to its SUVs some day but they now look unremarkable. The Porsche Cayenne has a fabulous interior and drives well, but its aggressively arrogant looks are a turnoff.

Slightly smaller than the more understated and recently renewed classic Range Rover, the Sport has racier looks, and shares some design aspects with the little Evoque. The Sport is lower and shorter than the Range Rover. The roof line plunges towards the rear, like the Evoque, but without suggesting that the rear-seat occupants need to be headless. From the rear, the look is square and purposeful. The new Sport dumps the old steel body which it shared with the Discovery, and uses much aluminum borrowed from the new Range Rover to save a huge 925 lbs. 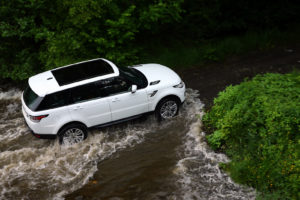 Given the strength of the opposition, Land Rover is pulling out all the stops to show its candidate is the best off-road performer, and at a media launch in Wales and the west of England there was much fording of rivers, creeping over rocks, ploughing along muddy tracks, and hurtling around sharp corners on mountain roads, all accomplished with aplomb. The most impressive aspect of these off-roaders is the way they conquer sharp hill descents. You drive carefully to the edge of what looks like a sheer cliff, and select hill-descent. The launch advisers tell you to take your foot off the brake, just steer it, and the computer will do the rest. As the bonnet drops away in front of you to reveal a sharp drop, it’s hard not to reach for the brake, or your priest, but the computer takes over and somehow restricts the speed and you move inexorably and slowly down to the ground, safely. Magnificently useless. 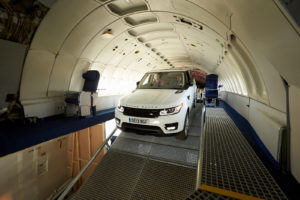 Land Rover also rented a local airport so that it could demonstrate that if you were to accelerate, foot to the floor, to 100 mph (which you might do in Germany) and suddenly need to stop, the car’s computer would ensure a safe return to stationary mode with a minimum of fuss. The airport’s main runway also allowed a safe demonstration that the Sport would reach 155 mph before the computer said “enough”, another ability which is legal on some highways in Germany. Land Rover converted an old Boeing 747, and had Sports driving up and down ramps to get inside and out. Before you ask “what’s the point of that?”, it’s probably true to say that few Range Rover Sports will ever be asked to demonstrate many of their awesome capabilities in the real world.

Faux graphic
The interior is luxurious. The driving position has a cockpit-feel. The dials for speed and revs are not actually dials at all, but faux graphic displays. That might irritate purists. There’s a third row of seats which pop up when required with room for two. High-tech driver aids include lane departure warning, blind spot alert, and torque vectoring, which uses computer power to correct dangerous driving mistakes. There are three diesels – V6 3.0 litre 255 hp – V6 3.0 litre 288 hp and V8 4.4 litre 334 hp – and the 5.0 litre Supercharged V8 petrol with 503 hp. Prices start at £51,550, and range up to £81,550 for the top of the range Autobiography Dynamic. At launch there will be just the 288 hp diesel and the V8 petrol. A diesel-electric hybrid version is expected later this year. Stop-start across the range is said to improve fuel consumption by seven per cent. Because it is so much lighter than the old one, there may well be smaller, four-cylinder engine one day. There’s a standard eight speed automatic gearbox. 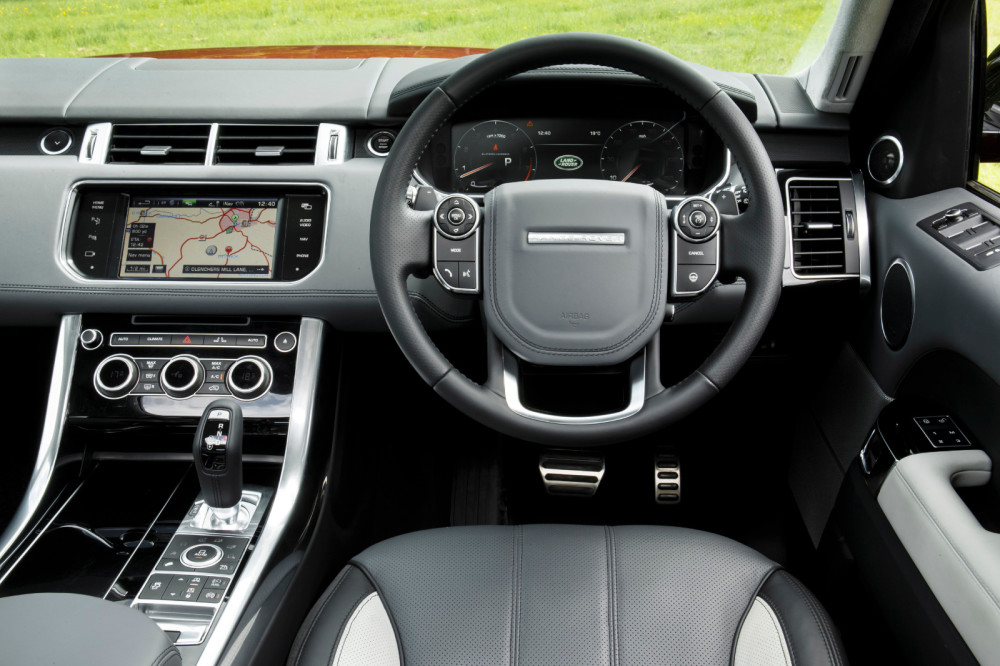 Land Rover said new lighter Sport has been engineered to deliver dramatically improved on-road driving dynamics, with more connected and agile handling complemented by enhanced ride and refinement. I wouldn’t argue with that. The lightweight aluminium suspension is independent, with double-wishbones at the front and a multi-link layout at the rear.

There’s so-called Adaptive Dynamics, featuring continuously variable dampers, and on more powerful models, a Dynamic mode in the Terrain Responsesystem for enthusiastic on-road driving. Very clever, but can you imagine anyone who can afford a car like this being an enthusiastic off-roader? For any one who cares, this system combined with “twin-channel Dynamic Response active lean control, a Dynamic Active Rear Locking Differential, and Torque Vectoring by Braking, transfers torque to the outside wheels during cornering, reducing understeer.”

Head-up
You can pay more for a colour Head-Up Display, which presents key vehicle and navigation data without the driver needing to look away from the road, using laser technology for superior clarity and contrast. That’s technology you can use. 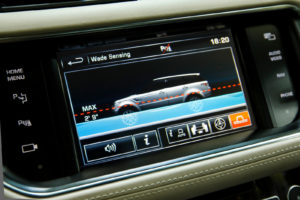 The new model introduces a digital camera system which supports three driver assistance features that help deliver improved driver awareness: the aforementioned Lane Departure Warning, Traffic Sign Recognition and Automatic High Beam Assist.  Another unique innovation on the Sport is the new Wade Sensing feature that provides depth information when driving through water, made even more beneficial now that the Sport’s maximum wading depth has increased by 150 mm over the previous model to 850 mm. Can you imagine a buyer of this vehicle plunging into a river without knowing in advance that it was more a kiddies paddling pool than the Mississippi?

The new Range Rover Sport goes on sale this summer. Buyers can choose from three equipment levels from launch – HSE, HSE Dynamic and Autobiography Dynamic –  and a SE derivative available on TDV6 models from early 2014. For anyone wondering that if this car is so good, surely that makes the classic Range Rover superfluous to requirements, Land Rover says the added space and luxury makes it a contender for the Mercedes S class and other limousines like the Lexus LS, BMW 7 Series and Audi A8.

Even if all these SUVs were of equal off-road ability, and ubiquitous computer systems mean they almost certainly are, the Range Rover gets my vote for its elegance. I can’t resist one contrary thought though. Given that these machines can do so much that nobody is ever going to use, how much would you shave off the price if you stripped useless ability away? 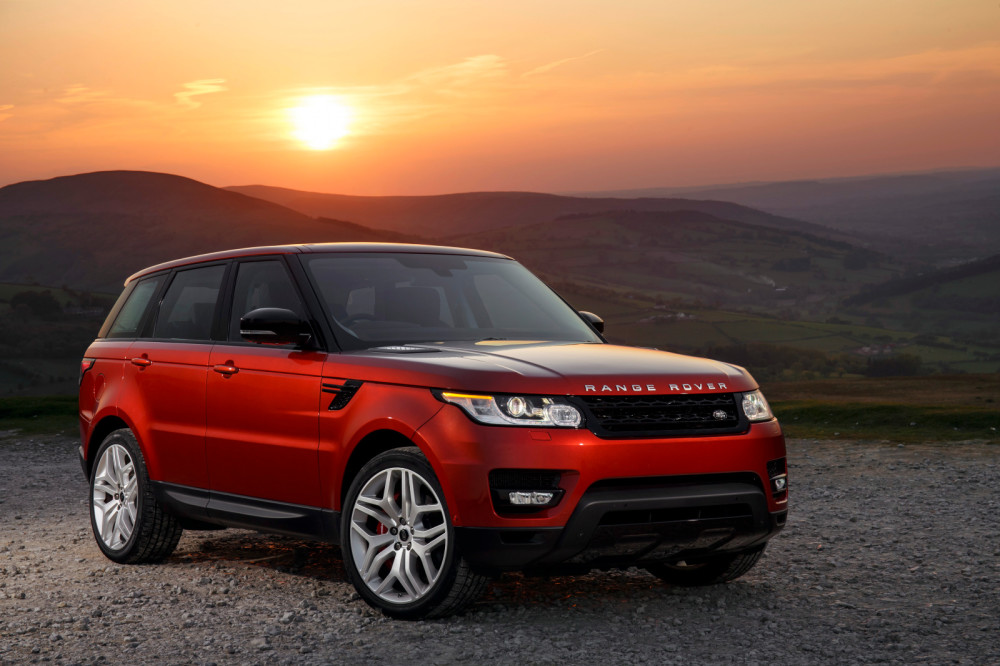