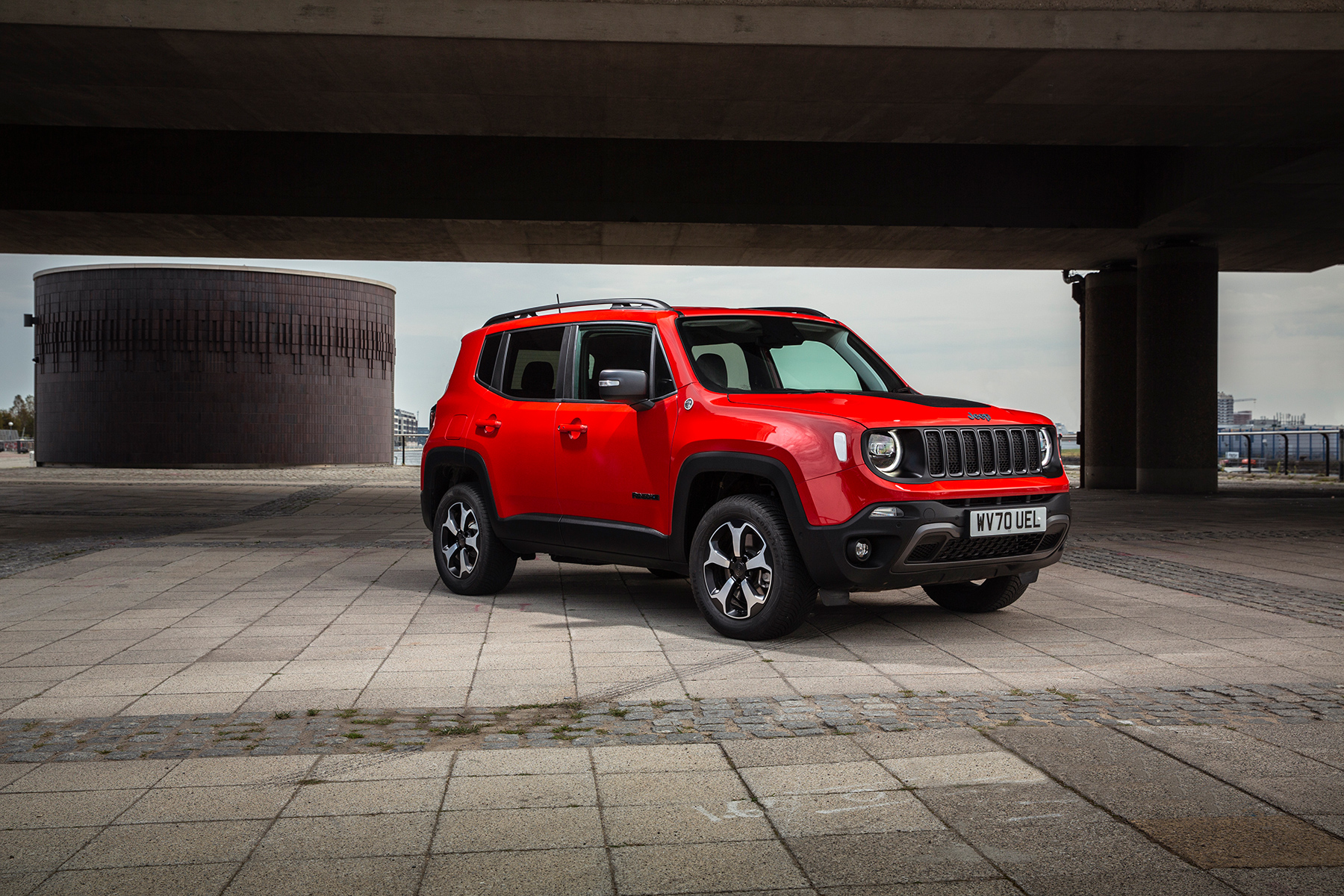 There’s nothing bland or boring about the Jeep Renegade.

The body design of this SUV is eye-catching and original. My test car was especially in yer face with an outrageous orangey red paint job which at least will mean you never have problems finding it in a carpark. This version was special because it was not just another hybrid, but a plug-in one. Known by its full handle, it’s a plug-in hybrid electric vehicle or a PHEV, as in the headline. 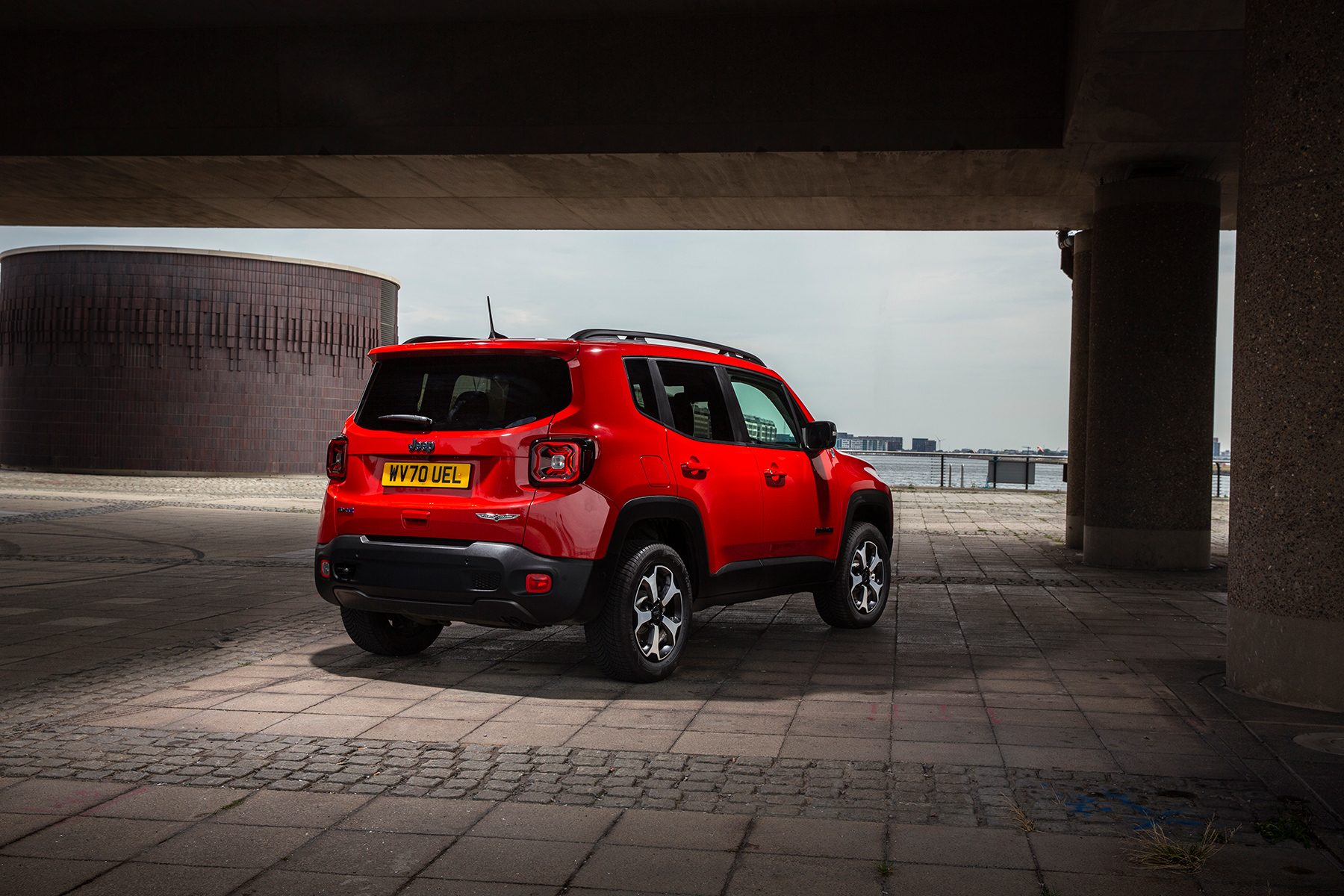 Just in case this is new to you, a regular hybrid, like the long-running classic Toyota Prius, boosts fuel economy by using a separate electric motor to help the petrol one. The computer manages the liaison between the two, making sure the petrol motor is helped when accelerating, or making it work as little as possible when moving down gradients or in city traffic. Roughly speaking, this makes it as economic as a diesel without the noxious emissions. It has a little battery-only capability, perhaps less than a mile. You can’t charge the battery independently by plugging it in to your house, but you can with a PHEV. PHEVs have much bigger batteries, and this allows up to 30 miles of just electric, CO2 emissions-free motoring.

In theory, this Renegade PHEV will turn into a virtual electric car if your commute is short, or the school-run or local shopping is the extent of your motoring. If your commute is a 60-mile round trip and you have a charger at the office, same difference. The trouble is the range claim of in this case 26 miles is a bit exaggerated – I managed an average of 18 miles. And the range availability consistently claimed 31 miles at the start of a journey. One regular trip of mine is 18 miles there, and that accounted for all of range. That’s a bit unfair given that the destination was up hill – a golf course behind Brighton since you ask – but the return downhill journey didn’t payback much from the regenerative braking, which some systems can. Incidentally, the trip to the golf course revealed that this chunky compact SUV wouldn’t take my golf bag, without folding one rear seat down, unlike my own Suzuki Vitara, which can. 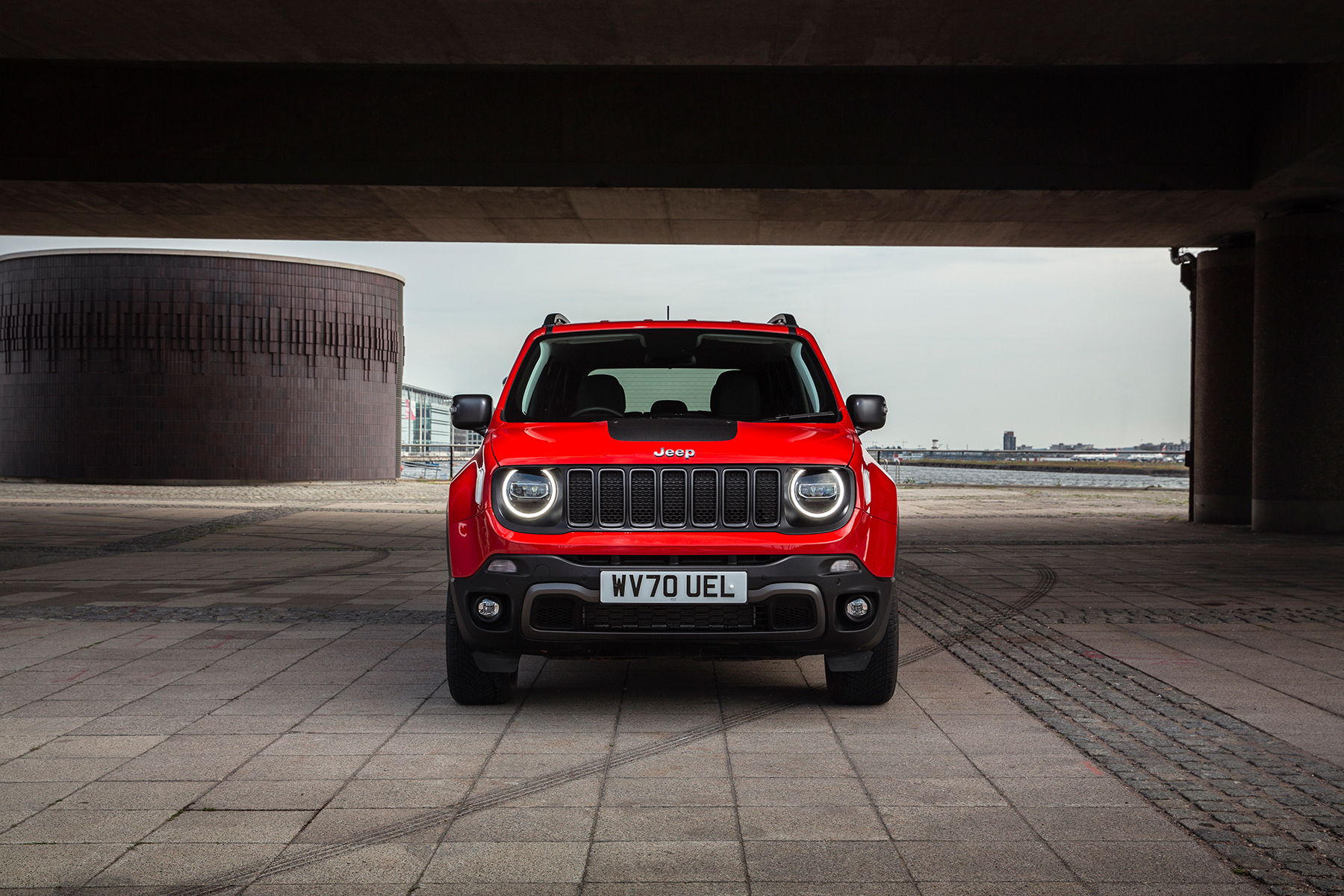 Embarrassing moment
The Renegade drives surprisingly well with terrific steering and well cushioned ride. It’s very restful cruising along highways and country roads, but if you put your foot down, it becomes a bit ragged and noisy as the gearbox seems to be continually hunting for the appropriate cog. The standard leather interior was OK, although not up to what I expect from a £40,000 motor. The control screen, which often now mimic the Tesla trend as high and almost detached from the dashboard, was integrated into the car and many controls that weren’t on the screen seem too low and far away and were difficult to read let alone find when you’re on the move. For instance the buttons for Hybrid, Electric and Save were too obscure. The transmission options too – the little wheel for sport, sand, mud, snow etc – were dangerously fiddly. Given that only the Sport mode is ever likely to be used, that’s probably not much of a problem in reality.

I did have memorable embarrassing moment too. When I returned to the car from my round of golf, it refused to start. Remember, in modern cars the procedure is foot on brake, push start button (and or clutch etc), off you go. I did that a few times with no success. I had a problem with a Mitsubishi Outlander PHEV last year when some weird combination of events led to a flat battery, so I assumed this was a similar problem. I dialled the rescue number and waited. “It’s the lairy red orangery one in the car park”. When the help operative arrived, he jumped straight in and it started. “You have to push very firmly on the brake first,” he said with a knowing, almost apologetic look. Very embarrassing, it you have the necessary genes.

Being a Jeep, off-road claims are high on the agenda. 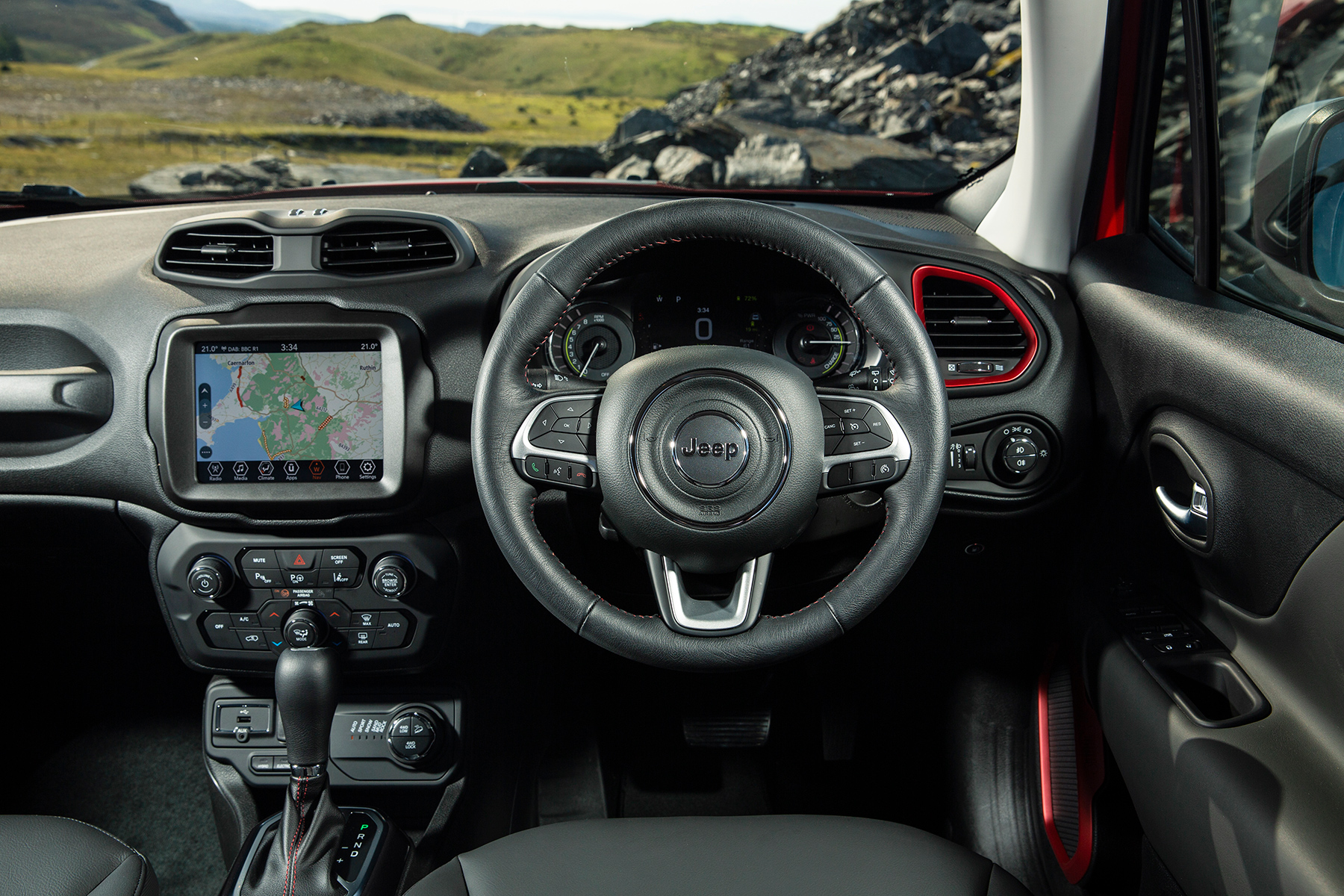 “Legendary off-road capability”
“With two electric motors featuring Powerloop, all-wheel drive is always available to tackle extended off-road adventures on extreme terrain. With its most recent step into the world of electrification, the Jeep plug-in hybrid propulsion solution is capable of enhancing the legendary off-road capability of its line-up of SUVs, starting with the Renegade 4xe plug-in hybrid. This latest evolution of Jeep fully reflects its core values of freedom, adventure, authenticity and passion,” says the blurb.

I’d wager that 99% of these vehicles will never venture off tarmac.

“The Jeep Renegade 4xe pairs a 1.3-litre turbo petrol engine with an electric motor, located between the rear axle, which is powered by an 11.4 kWh battery that can be recharged while driving or through an external power outlet or charge point. On its own, the efficient 1.3-litre turbo engine delivers a power output of 130hp or 180hp, plus the 60hp produced by the electric motor, giving a total of 190 hp in the Longitude and Limited version or 240 hp in the Trailhawk model. In terms of torque, the electric motor produces 250 Nm, while the combustion engine delivers 270 Nm. The combination of an internal combustion engine and the electric units guarantees performance and maximum driving pleasure, with acceleration from zero to 62mph in around 7.5 seconds and a top speed of 81mph in full electric and up to 124mph in hybrid mode.”  So there. 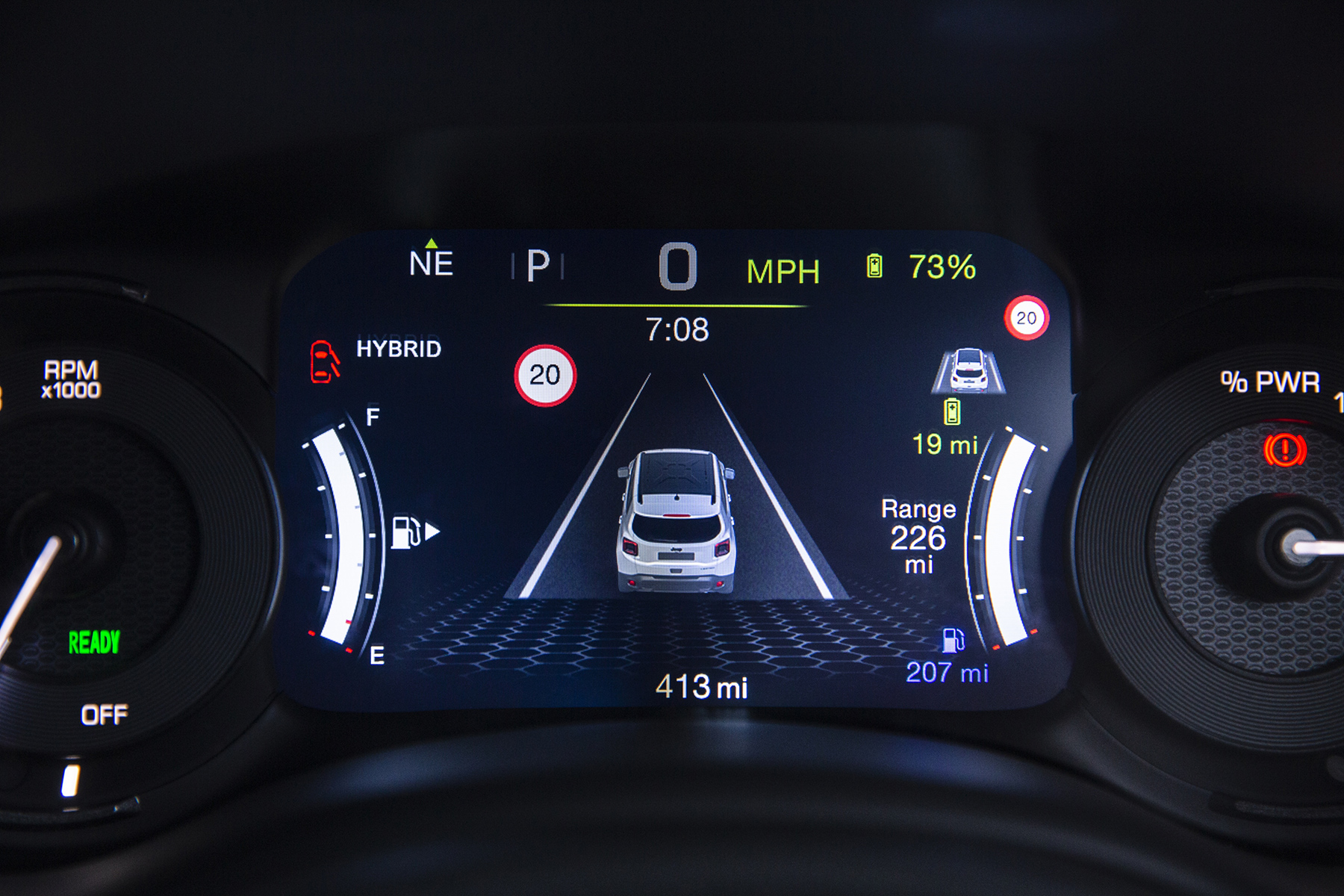 What to buy?
PHEVs are all about fuel economy and I managed an average of 69.4 mpg, which is pretty good, but nowhere near Jeep’s claim of 123 to 134 mpg. The claim is simply out of this world. If you never drive more than 25 miles and there’s a charge point there, you won’t buy petrol again, ever. I suppose there must be combinations of use that would give you 123 to 134 mpg, but it is a ridiculous, pointless claim. All it does is give ammunition to Green groups who then devalue what is an impressive contribution to the electrification debate by screaming “auto industry liars”. PHEVs can be affordable compared with pure electric cars, and defeat, no consign to history, range anxiety. And the latest PHEVs like the Suzuki Across offer 50 miles from a charge. A Mercedes diesel PHEV might give you close to 100 miles, although green maniacs will flip out because of the hated diesel element. The competition in this sector is an odd group with little in common – Mitsubishi Outlander, Mini Countryman, Kia Niro, Renault Captur – I might go for the Outlander on the grounds you physically get more for your money. But actually I’d wait for the Suzuki, which I’m driving in the summer, but which is a bit more expensive that the others. 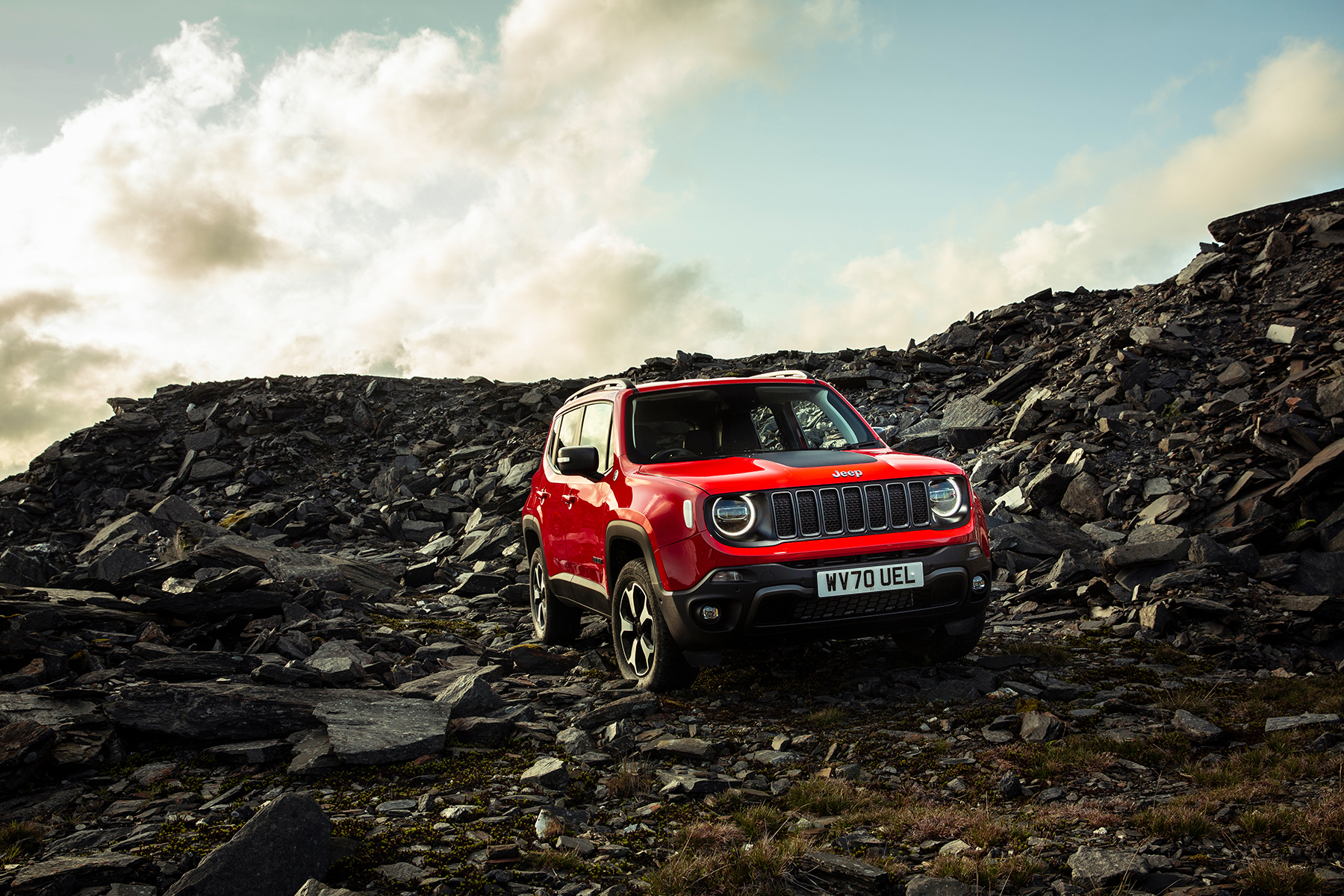