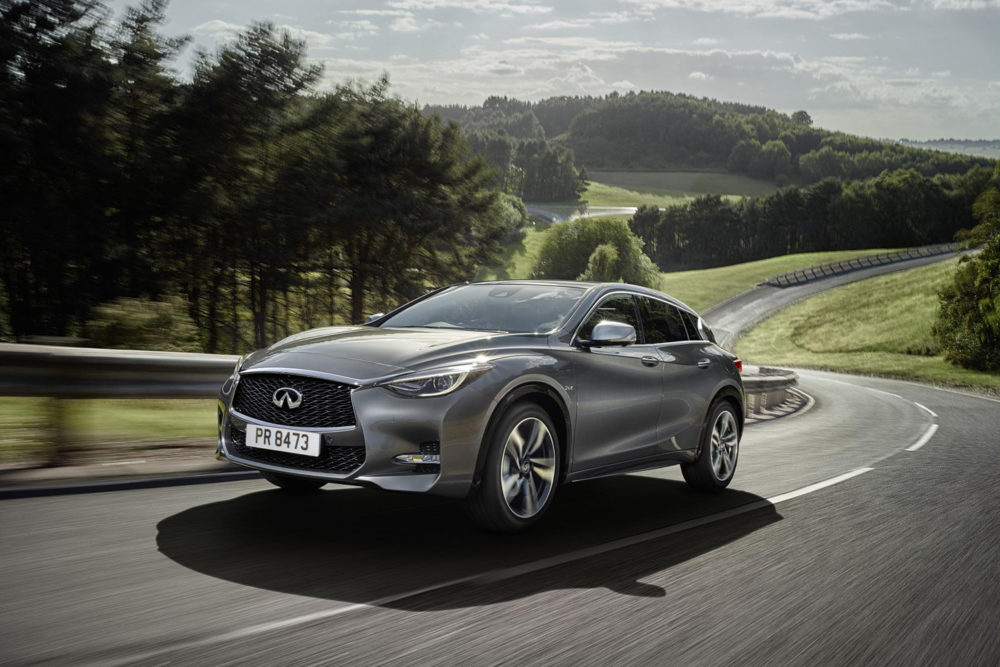 Infiniti is the latest wannabe upmarket car company, throwing itself against the hitherto impregnable fortress, otherwise known as BMW, Audi and Mercedes.

I wrote about the Jaguar XE last month, which is on a similar mission, but with its heritage and brand power at least stands a chance of getting a foothold at the bottom of the battlements.

Infiniti though has none of Jaguar’s advantages because, in Europe at least, it is starting from scratch. Infiniti, a subsidiary of Nissan of Japan, has been in the U.S. premium market for some time and has made something of a success there. Here in Europe it has offered some bigger cars competing in the BMW 5 and 7 Series segments with SUVs too but hasn’t made much of an impression yet. The styling of these big, gawky vehicles didn’t really work in Europe and at higher price points buyers really demand a vehicle with proven brand power. 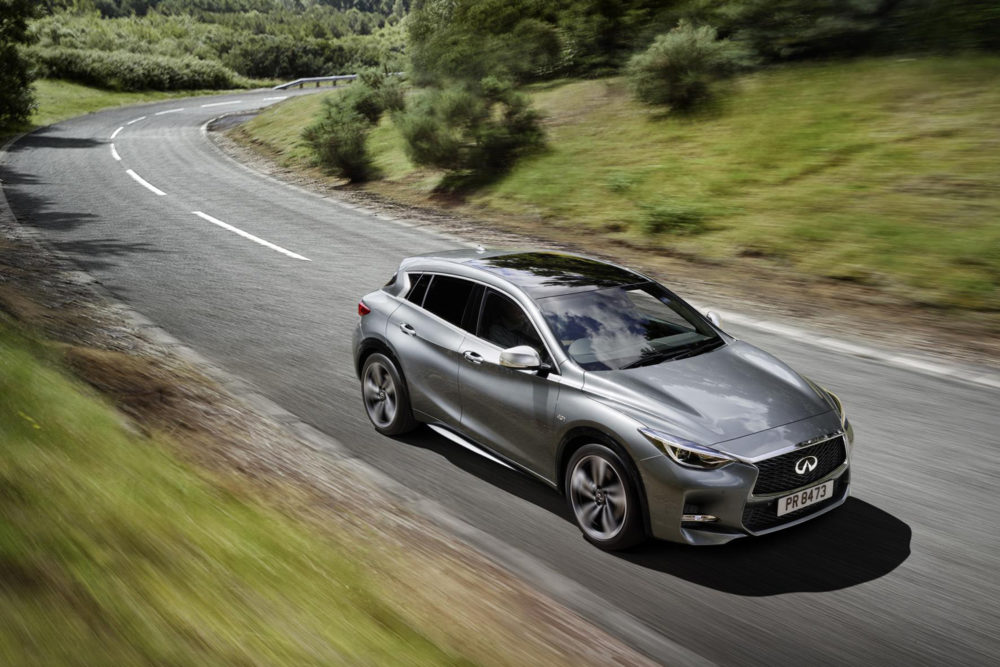 But the smaller Q30 might be a breakthrough vehicle for Infiniti. I’ve just spend a week driving one and it was very impressive. Like the Jaguar XE, the Q30 at this price faces down the class leading BMW 3 Series, Audi A4, and Mercedes C class. If you look at the base price models you would have to compare them with the BMW 1 Series segment. The styling rebels against the German trend to ever more bland, barely recognisable anonymity with its in-yer-face shapes and curves. I found the styling interesting, consistent and attractive, although undoubtedly many will disagree. And it drives very well indeed. The 208 hp, 4-cylinder 2.0 litre version has very impressive acceleration and quiet cruising ability. The 7-speed automatic gearbox was terrific, and the surprising four-wheel drive comforting, although I never found conditions that could show off its worth. 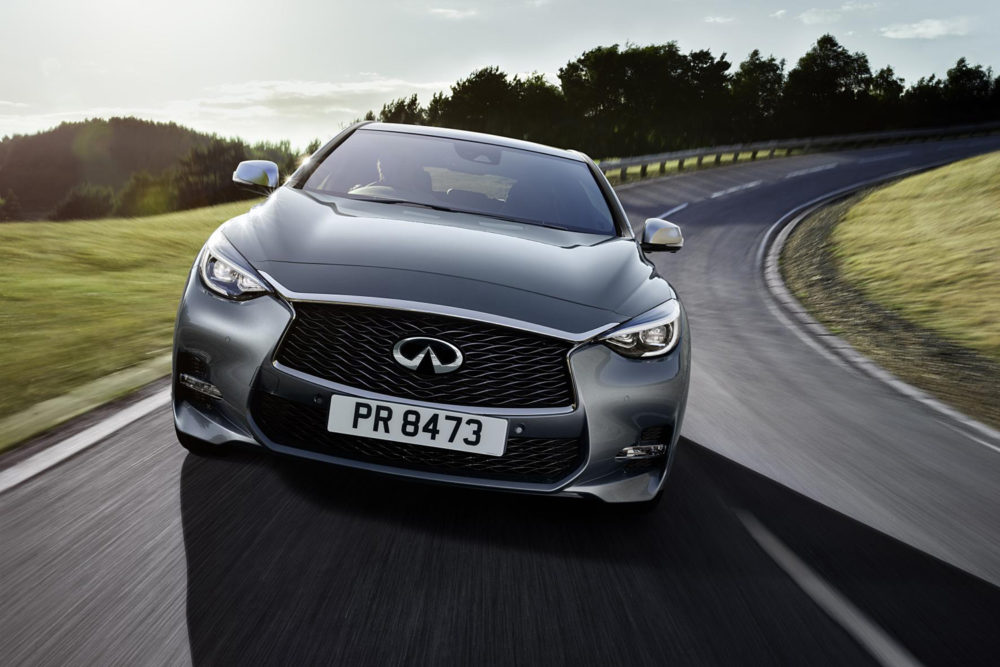 Lavish
The interior was excellent, with quality and finish certainly up to German standards, and standard equipment was lavish for this version towards the top of the range. The heavy doors slam shut with an agreeable, solid clunk. The boot was a bit tight for golf stuff. The rear was snug. I loved the handsome automatic gear shift control, which contrasts with the feeble looking little wheel at the hub of the Jaguar XE auto box.

Like all modern upmarket cars, the technical possibilities are so huge that dealers need to devote a couple of hours to train new owners to get the most out of them. None of this stuff is intuitive and I dream of the day when voice control becomes effective. “Speed limit 35 mph please”, “Cruise control at 85 mph please” or “park in the next available space on the left please” will get the job done.

Infiniti calls the Q30 an active compact. Prices start at £19,780 for a petrol version and from £20,730 OTR for a diesel. The version I drove was exceptionally well equipped at £31,930. The glass roof with electric sunshade added £500. The range starts with the Q30 in base, ‘Premium’ or ‘Premium Tech’ form. You can also choose the ‘Q30 Sport’. The Sport model sits 15mm with individual suspension settings and distinctive ride and handling. There’s a choice of three gasoline and two diesel engines, from 107 to 208hp. The base, Premium and Premium Tech models are available with a 1.6-litre gasoline engine, or a pair of turbodiesel engines – 1.5-litre and 2.2-litre. As well as the seven-speed dual-clutch transmission, there’s a six-speed manual on 1.5-litre diesel and 1.6-litre gasoline models if you like. 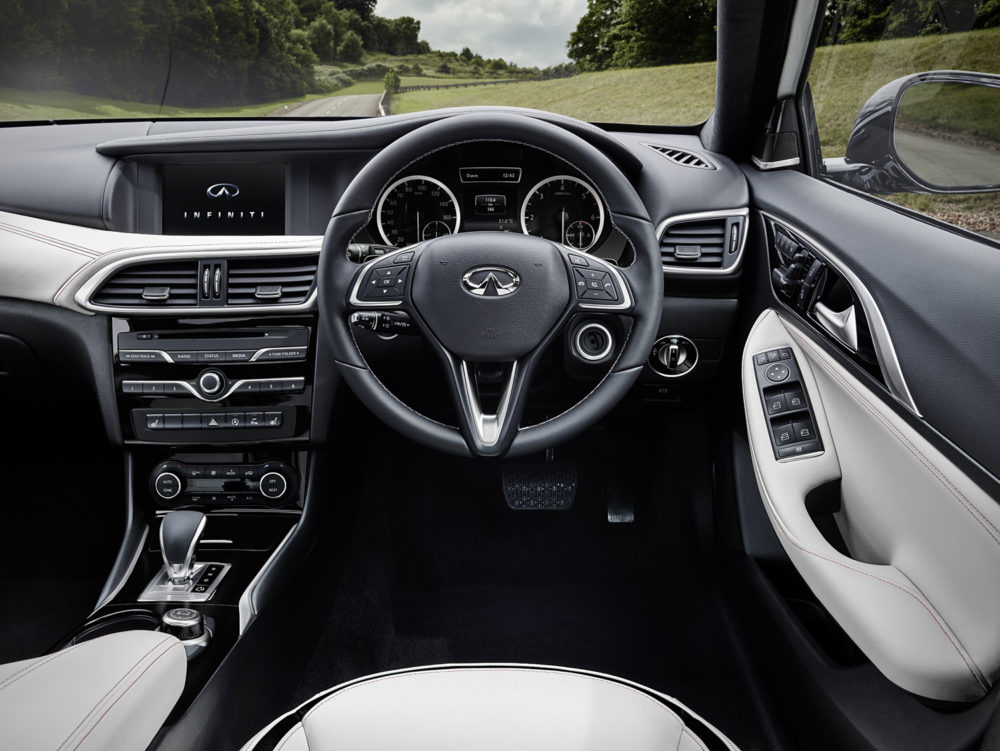 Doesn’t come close
You won’t be surprised to learn that fuel consumption doesn’t come close to claims. Infiniti claims an average 45.6 mpg. My test, in conditions very favourable for economy only managed 28.8 mpg, a -37% miss.

Infiniti’s trademark InTouch infotainment system, first introduced on the Q50, has been evolved and upgraded for the Q30, delivering a tablet-like experience from the driver’s seat via a touch-screen.  Using a 7.0-inch touch-screen display at the centre of the console, the infotainment system offers drivers and occupants a wide range of apps. 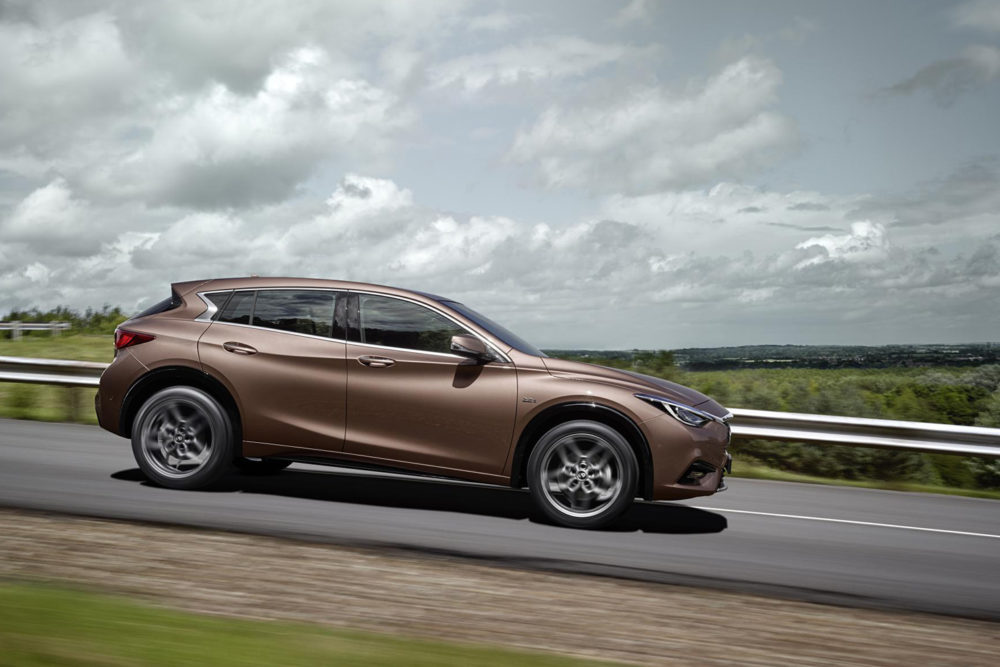 Infiniti InTouch boasts the company’s latest turn-by-turn navigation system, which can be upgraded to feature NavTraffic, offering real-time information on traffic, and NavWeather, which shows up to a three-day weather forecast. Infiniti Voice Recognition can interact with the InTouch infotainment system to control audio and navigation commands.

A class in disguise
The Q30 is Infiniti’s first vehicle produced in Europe, after a £250 million investment at the U.K. plant in Sunderland, so if you are British you can feel patriotic if you opt for this over one of the Germans. The fact though is that this car in fact owes more to the Germans than you’d think. It is the result of a long-established cooperation with Mercedes and uses much engineering and some of the engines from the A-class; so much for patriotism. At the low end of the price range the Q30 comes up against the A-class, but the model as tested has to fight it out at a higher level. 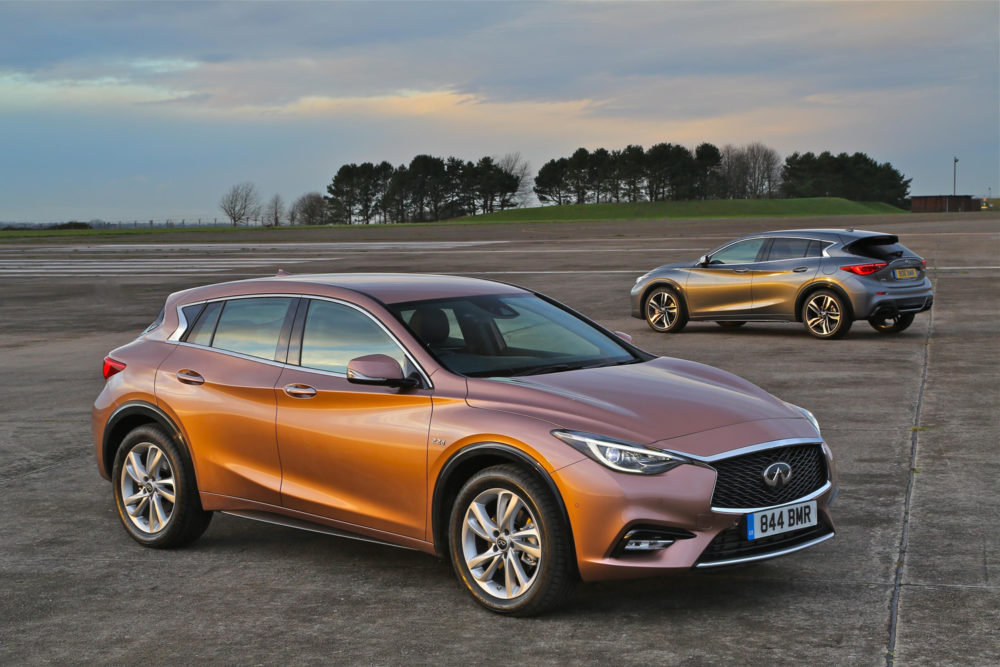