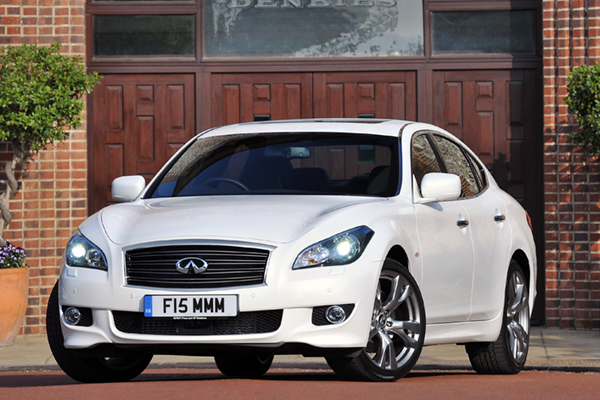 Despite its overall high quality, Infiniti faces an uphill task against the established competition
rating **** out of 5

Some may say that the deepest recession in living memory and an era of man-made global-warming obsession was not the time to launch a range of large, petrol-engined luxury cars with CO2 emissions probably double the average.

Infiniti has been successful in the U.S. for over twenty years and is to Nissan what Lexus is to Toyota and Audi to Volkswagen. Infiniti has been launched in 34 markets across the world and the United Kingdom was the 35th. Since the U.K. launch in 2009, Infiniti has finally introduced diesel models but only to its Mercedes E-Class-rivaling M and Audi Q5–challenging EX all-wheel-drive SUV.   Having pigeon-holed these two new diesels it should be said that Infiniti does not want to follow the market-leading German makers, model for model and some of the no doubt excellent Infiniti models do not fit into any established categories.

Once you accept that these are luxury cars not designed for economy or saving the planet you will not be disappointed. They are built to very high standards with unbeatable specifications and very limited options lists. The prices are competitive and the equipment levels are very high.

For several years now Audi has been the benchmark for interior quality and Infiniti is the first manufacturer to actually match that peerless standard with beautifully engineered mouldings and finely crafted stitched hides. It may be that Infiniti is targeting Audi in particular as the G37 saloon is available with all-wheel-drive, previously the preserve of Audi in the UK’s premium sector.

Infiniti’s marketing ‘puff’ tell us that it is not just selling cars; it is offering a complete ownership experience which has been honed in the U.S., the land of some of the most demanding customers on the planet.  Buyers concerned about the limited Infiniti network are told not worry as Infiniti dealers offer free collection and delivery of cars for service and repair within a 150 mile radius of the nearest centre including the provision of a free, equivalent courtesy car. Infiniti has tried to get away from the typical dealer environment by basing its centres on the style of luxury hotels and providing account managers instead of the traditional ‘salesmen’. There is a standard architectural model for its buildings meaning that a centre in say China will be identical to the first British one in Reading. 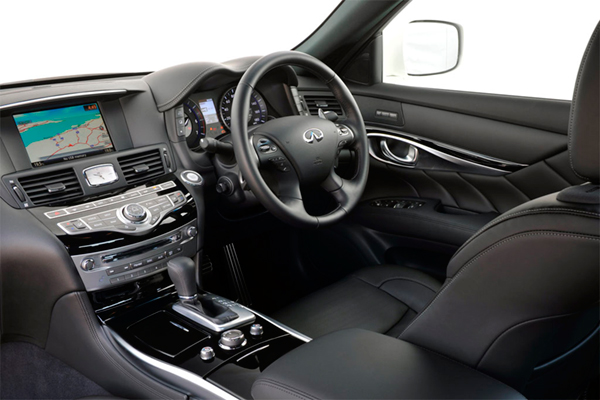 Currently, Infiniti’s best dealer in Europe sells just 150 cars a year and it will be interesting to see how the Total Ownership Experience holds up if the Infiniti centres ever sell annual volumes closer to the 800-1,000 of Audi and BMW dealers. Judging by the exemplary customer service of Lexus, if any brand can do it, it will be Japanese.

The Infiniti range currently includes the G37 saloon, the G37 two door coupé, the G37 convertible, the M executive car, the EX 37 4-door coupé and the enormous FX SUV with the option of a silky-smooth 390 bhp V8 engine guaranteed to start a green lobby protest march.

Infiniti executives claim its volume aspirations for the UK are conservative at 8,000 per annum in 2012 when there will be 12 dealers. However, when it is considered that despite having been in the UK for nearly 20 years with some excellent products, fabulous customer service and around 50 stand-alone dealers, Lexus sold less than 6,500 last year, it seems a very ambitious target. After all, 8,000 Infinitis sold are 8,000 less sales for the likes of Audi, BMW and Mercedes all of which offer much more economical luxury cars with huge opportunities for customisation.  Infiniti will have to rely on what in marketing speak are called early-adopters who are wealthy enough to try something because it is new or different without worrying too much about residual values and running costs. Last year Infiniti sold less than 250 in the UK so there is some work to do.

When it comes to driving, the new Infiniti M30d is right up there with the Germans, the Lexus GS and Jaguar XF. The 238 bhp V6 diesel is adequate although it is disappointing that with a new car Infiniti didn’t take the opportunity to equal or exceed the output of the most powerful in class, the 273 bhp, Jaguar XF 3.0d, which is a real flyer. After all, Infiniti is coming from behind here and has that mountain to climb to take sales away from the highly polished establishment. 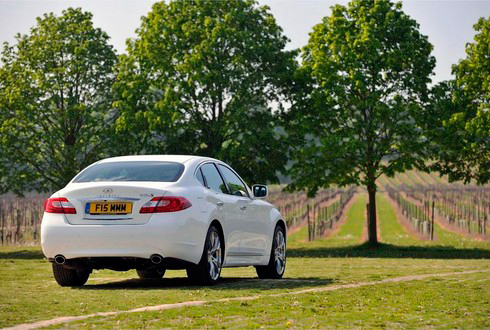 The Infiniti is as quiet as any and is a very restful drive and offers a compliant ride, excellent road holding and well-weighted brakes. There is no shortage of specification, probably making it the best in class and with so few cars sold in the U.K., it certainly offers a more exclusive alternative to the Germans which might even be its saving grace.

This is a brave initiative by Nissan to spread its successful concept from the U.S., but it will be no easy task to take those 8,000 sales from the established German premium brands, Jaguar and Lexus and only time will tell if it can be done. 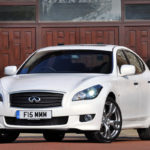 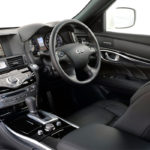 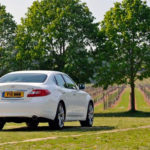