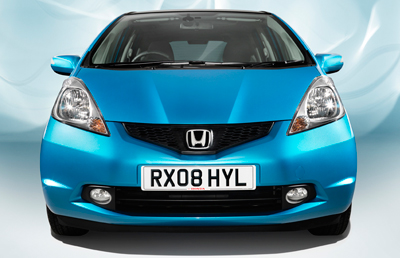 Wrinklies Will Still Love It, Younger Downsizers Too.
***** out of 5

Honda says it wanted to make the Jazz the best small car in the world and I can’t think of any reason to argue about that.

OK, so I’ve not driven every small car in the world yet, but I can’t think of any that I’ve not driven that might get close to the Jazz. This is the second car this month that I’ve award my maximum 5 out of 5 stars. This won’t happen too often in the future; only when the cars that I own are renewed or facelifted including this Jazz, and the awesome BMW 330d.

Honda reckons that with the ever-increasing cost of motoring and pressure to improve fuel consumption, many buyers will be looking to move into smaller cars. So the new Jazz is said to have a big-car feel to it, plus all the available goodies which are expected in more expensive cars. 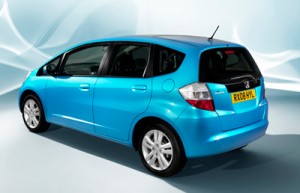 The Jazz has been very successful in Britain, Japan and believe it or not the U.S., but only mildly so in mainland Europe where the lack of a diesel hasn’t helped. The new one has such impressive (theoretical) fuel consumption this continued omission might not matter too much. The car’s appeal in the U.S. is to a dramatically different market; apparently young Americans and students love this little car. It’s almost exactly the same. But in England this is a grey-top-mobile. Weird.

I’ve owned a Jazz for 6 years. It is a brilliant design, packing huge lugging capacity into a small body. It drives well, provided decent economy (38 mpg-7.4 l/kms) and always looked cute. The manual gear box was first rate (I drove the manual version before opting to buy the CVT automatic). The car never let my wife Kathy or me down. And now Honda has improved it.

Sleeker
It certainly looks a little more exciting, although still obviously a Jazz. It’s a bit longer, so the body looks sleeker. It’s slightly wider, and the same height as the old one. The headlights and body detailing have been improved. It looks terrific. Did the initial Jazz have any glaring faults which needed addressing? 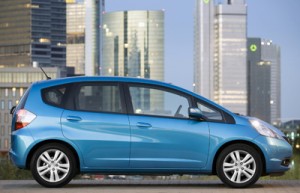 Not really. The suspension was said to be overly harsh, but I never found that a problem. The engine was a willing performer, but always sounded a bit reedy, a bit low-tech. There was no diesel. There still will not be a diesel, but by 2010, 2011, Honda plans a petrol-electric hybrid Jazz. I think I may just go for that. There’s no question in my mind that my current Jazz, now with 74,000 miles on the clock, will still be plugging away by then.

The suspension on the new version smoothes out the bumps well, and as for the engine, it is so quiet, I inadvertently tried to switch it on, twice, when it was already running on the press launch.

Flattened in one movement
The so-called Magic Seats which were such an eye-opener on the original Jazz when it was introduced in 2001 have been improved. On the old one you had to use two hands to fold the rear seats flat, now Honda has eliminated the need to push the headrests down, so the floor can be flattened in one movement. The design to transform the back of the Jazz into a flat-bed van depended on flattening out the fuel tank and putting it under the floor, rather than the traditional place under rear seats. Nobody else has managed to do that yet as far as I can tell, although the new Smart ringer, the Toyota iQ, on sale in the New Year, has this same arrangement.  Now there is even more room in the Jazz. 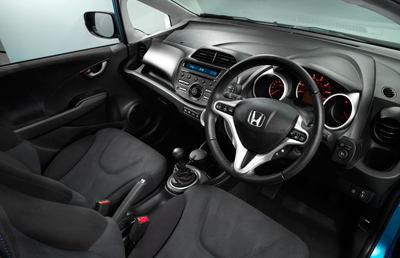 In the old one I could load my mountain bike in the back without removing the wheels. You can put two in the new one. If you recline the front passenger seat there’s 2.4 metres of load space. The rear seats still tip up like they do in a cinema, so you can move your aspidistras and other tall things. The new one has an improved luggage area with the so-called Double Trunk, which offers two separate levels to load stuff into, with a net to stop them rolling around. The added dimensions mean a bit more leg-room for the rear passengers.

Blown the gaff
Honda has also added more storage space all over the car, including a refrigerated glove box, 10 cup holders, places for iPods (and connector plugs) and mobile phones, and a “secret” space under the rear near side seat to put valuables. There; now I’ve blown the gaff.

There are two engine choices on the new Jazz – a 1.2 and 1.4 litre – both petrols. The old ones had 2 valves, the new ones have 4. They deliver lively performance with increased power and torque. There is an electronic drive-by-wire throttle control. I’ve no idea why they call it that; like a fly-by-wire system in a plane, there are no wires, the contact is not mechanical, purely electronic.

Fuel economy looks impressive on paper. The 1.4 manual is said to achieve 52.3 mpg-5.4 l/kms.  The 5-speed manual is fantastic, just like the original. You’ll be thinking BMW, not Honda when you move through the gears. The CVT automatic has been replaced by the 6-speed i-Shift automated manual transmission, available on the 1.4 litre version.

No rolling back
This works well and allows fast kick-down and gear-changing by using the steering wheel mounted paddles, in the unlikely event that any typical Jazz drivers would even think of doing such a thing. The-Shift has Hill Start Assist, which prevents the car from rolling back when moving from brake to accelerator. Jazz wrinklies will love that. Fuel economy on this automatic is, according to Honda, better than the manual, with 53.3 mpg-5.3 l/kms.

Honda apparently found from customer clinics that the steering didn’t respond with enough feedback, so the electric power steering has been improved with a more powerful motor. The forward roof pillars have been made skinnier to improve all-round vision. There is no sun-roof option; that’s been replaced by a moon-roof choice.

I can come up with some negatives, but only concerning the dealer not the car. My last service, at 72,000 miles, cost an eye-watering £430-€555. Honda says it has addressed this with long-term maintenance deals. 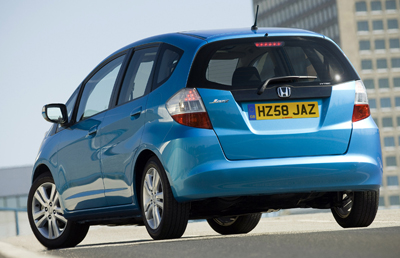 Apologies accepted
After relieving me of £430, my local dealer, trying to emulate BMW, cleaned the car, but left half the interior grubby. When I drove the car away a warning light was flashing. I consulted the handbook, and this turned out to be a possible life-threatening condition for the engine. I had to return the car. Next day, on my driveway, a stray nut had me thinking the Waitrose van must have a screw loose. Not so. Two other nuts on the Jazz were loose and one was missing. Apologies were accepted. I guess nobody’s perfect, not even when you have the best small car in the world.