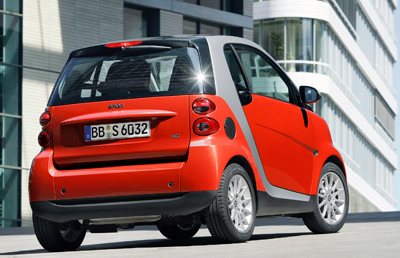 Battery Power Does The Business In Town.

Limited Range A Worry, But Mega Cheap Costs Will Sway Many.
Electric Smart Runs Out Of Steam After 60 mph, But So What?

Eerie Silence Threatens Pedestrians, Pets, But V8 Recording Will Help
***** out of 5

“There will be a burgeoning market in exterior sound systems. I’d like one that makes mine sound like the V8 howl in an Aston Martin”

The kind of people who worry themselves sick about the environment won’t be liberated if they buy a battery car like the Smart ForTwo ED (for electric drive). 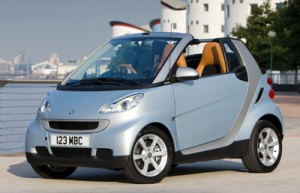 Sure, it means that they will no longer have to fret about belching out carbon dioxide wherever they go; the CO2 has already been emitted by the coal-fired power station which has generated the  electricity. (CO2 isn’t a pollutant, it’s a key element in life on earth, so the rest of us won’t be worrying anyway). No, eco-warriors will surely find something else to worry about and in the case of the silent Smart, they should agonise about mowing down pedestrians or squashing pets who venture into the road, lulled into a false sense of security by the lack of noise.

I’ve been driving around in a battery-powered Smart car, and a mightily impressive little thing it is too. It zips along silently at up to 60 mph. Well, to be fair, it zooms up to 50 mph, then staggers on to 60 mph, if you can find a handy down-hill gradient or a following wind.

So this is not a car for the highway. Around town it is terrific, with one huge disadvantage. Every time you set out on a trip you think, is there enough juice in the battery (there is only a battery) to get back safely? Mercedes, which owns Smart, said there is about 70 miles in a battery, but I found that 50 miles was probably a safer bet.

Paranoia
And when the battery indicator starts to fall below half-full, paranoia sets in. You switch off the air-conditioning first, then even the radio, desperate to conserve power. I found myself switching off the direction indicators early just in case that might be the difference between being stranded and getting home safely.

The Smart ED is powered by a 41 bhp/30kW motor fed by a sodium-nickel chloride battery. You can’t buy one yet. Currently a fleet of 100 are being trialled by companies and local authorities.   Some cars are available for lease at £375 a month.

One huge advantage that battery powered cars currently have over gasoline and diesel power is the massive difference in the cost of filling it up. According to Mercedes, if you plug the Smart into your house overnight it will fill the tank at a cost one sixth of the price of gasoline.

“The electric Smart is capable of approximately 300 mpg, amounting to a saving of up to 80 per cent in fuel costs over its already highly economical Smart ForTwo (which does 66 mpg),” Mercedes said. 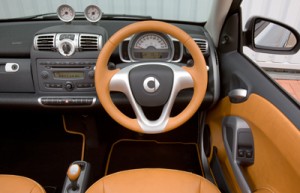 In Britain, the ED is exempt from vehicle tax, and the London congestion charge. It has its own charger on board and can be plugged directly into any UK mains three pin plug 230 volt socket. There’s a charge level indicator on the dash board where the rev-counter would be in a petrol or diesel car. It takes 4 hours for an 80 per cent recharge, or 8 hours for a full charge. Smart says a battery can be charged at least 1,000 times and will last up to 10 years. (If you use it every day that adds up to 1,095 in 3 years, but maybe I’m being picky).

Service charges are low because there is no engine oil, oil filter, spark plug or exhaust, while the battery and motor are maintenance free.

The drive-train for the ED is produced in Britain by Zytek Automotive, which also assembles the cars. The drive train integrates the electric motor, power and control electronics into one compact assembly. The engine is located in the rear of the ED where the regular motor would be. The transmission is also in the rear. There is only one forward and one reverse gear, so there’s no gear changing. You turn the car on, put into gear, then push down the accelerator and off you go. The battery is located under the floor giving a lower centre of gravity then the conventional car and improved handling. The ED has the same ABS, ESP and two airbags. Low down performance is actually better than the petrol engined variant with 0-30 mph coming up in 6.5 seconds.

Potato, potato
Inside, you won’t notice much difference from the conventional model, just the indicator for the battery where the rev counter might have been.

The ED was streets ahead of the other battery car I’ve driven, the Nice Mega City. It had much better performance and felt more car-like. But at least you can buy a NICE.

There is a way to make sure you alert people and animals to your imminence. You could install a recording of a conventional petrol/diesel engine. There will surely be a burgeoning market in exterior sound systems for battery cars. I’d like one that makes mine sound like the V8 in an Aston Martin, switchable to a Porsche 911 when I’m in the mood, or perhaps the potato, potato throb of a Harley-Davidson. 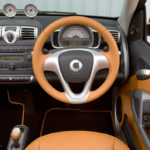 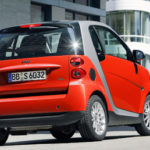 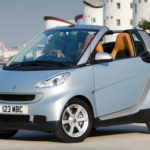