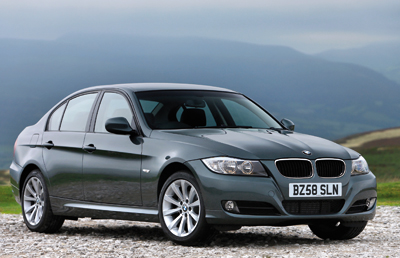 Face-Lifted – A Tweak Here, A Squeeze There.

Don’t Let The Dealer Experience Put You Off.

“Would you believe that a leak in the system which supplies water to the wind screen would too challenging for a BMW main dealer to fix?”

“I have to tell you now that no reply has been received, and it’s been more than a month”
(*the dealer speaks, see below)

BMW has face-lifted its 3 Series range with some tweaks to the body and some new engine options.

The new 3-series has a redesigned kidney grille, front bumpers and lights with LED additions as well. Slight changes to the body design make the car look longer. At the rear, the light clusters have been redesigned, also with LED. The interiors have been improved. So has the iDrive computer system. 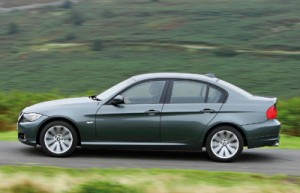 One engine that caught my eye in the line-up was the new 3.0 litre six-cylinder diesel engine that produces 245 bhp and 520 Nm of torque, and I drove it on the recent press launch. I own a six-year old version of this car which produces about 190 bhp, and when it was new I can remember reading about it in a car magazine, convinced that the writer had confused a 3-litre petrol engine with the diesel.

Surely a diesel couldn’t be that good, that sporty, that smooth. It could and I bought an automatic one. It still excites today, although there have been some negatives along the way with the ownership experience, which I can sum up with one word – Chandlers.

There have been a couple of minor glitches, the radio doesn’t work too well (Fix it? No. New one? That will be £500 sir) (as well as a major initial couple of problems), the last of which the local dealer has failed to sort. Would you believe that a leak in the system which supplies water to the wind screen would too challenging for a BMW main dealer to fix? Every time I turn on the car now, the little hieroglyphic reminds me that the reservoir is empty, even though the car has been back 3 times to get it sorted. 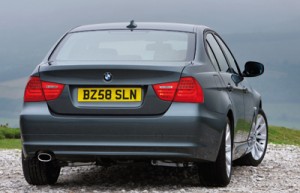 BMW runs a customer satisfaction survey which I receive every now and then, purporting to find out just how satisfactory the treatment has been over the lifetime of the car. Being a cynic, I always assumed that these surveys were just window dressing. You filled in the survey, which made you think BMW really cared about its customers. You returned the survey, which then went straight in the bin. This time though I’ve set a little trap. On the form I spelled out in detail how Chandlers had failed to fix this niggling little problem. Either they read the surveys, in which case I would receive a call, and the problem would be fixed, or silence would reign.

I have to tell you now that no such reply has been received, and it’s been more than a month.

Also, the fuel economy claim of an average of about 42 mpg never got close to being hit. It has returned around 33 mpg over its life so far. But I think that’s impressive.

If my boat comes in (again) and I can afford to buy new wheels one day I was wondering whether this improved version might be a candidate.

I’ve never been in love with the current 3-Series body shape. There’s nothing about its looks that stirs any emotions or whips up an urge to buy. But after driving the new 330d M Sport Saloon, I can tell you that I’m head over heels in lust.

Modern sporty diesels are amazing. Because of the huge amount of power available at low engine speeds, the engine response and acceleration is instant. The diesel thrusts the car forward powerfully but silkily. With a highly tuned petrol engine, maximum power doesn’t show up until the engine revolutions get close to the red band. With a diesel, the power delivery feels immediate, seamless, and endless. 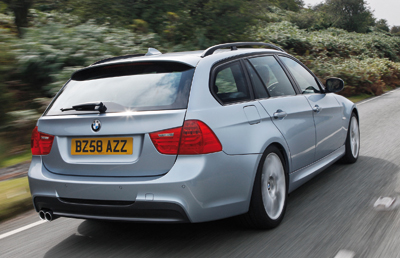 Fabulous
This new 330d was a wonderful driving experience. Even when you drive it slowly it feels fabulous. The new one has much better suspension that my old one, which feels bit thumpy in comparison.

The 330d M Sport’s engine blasts the car from rest to 62 mph in 6.2 seconds. (The “M” gives you the same engine as the SE, but with bits and pieces to make it seem sportier). The six-speed automatic box was so quick I had to check to make sure it wasn’t one of those new fangled DSG boxes. That will be available on the 335 petrol and 335 diesels though. The driving experience was so impressive I came away thinking I must have one.

BMW claims the 330d will achieve an average 45.6 mpg. I remain to be convinced of that. But the claim means that this car pays only £145 a year in British road tax. That’s a couple of bands down from my old one which costs £210 a year. 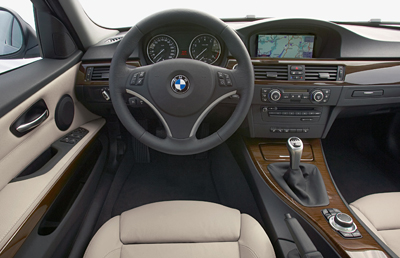 This segment of the market has some truly outstanding competitors. The new Audi A4 is fantastic too; the Mercedes C class will have some admirers. The Lexus IS looks the best, in my opinion, but it doesn’t have a big, automatic diesel. The Alfa Romeo 159 threatened briefly, but crashed and burned when it became clear old frailties hadn’t been conquered. The Volvo S60 seems to have disappeared. The Jaguar X-type is about to be demised. 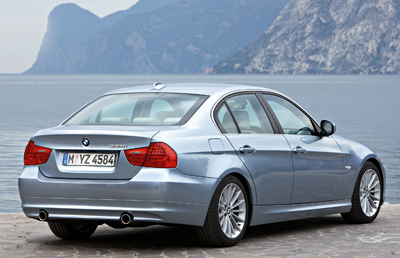 So it seems to me that the dynamic qualities of the BMW 3-Series make it a clear winner still in this sector. The only negative is probably the prices (and the dealer experience), but in this time of recession, even mighty BMW will be eager to offer you a deal.

(*I did receive a letter from my local BMW dealer, Chandlers, last week. This was addressed to my wife Kathy, who has never owned a BMW. It offered her, as an owner of a BMW more than 10 years old,  a 60% discount on servicing.)