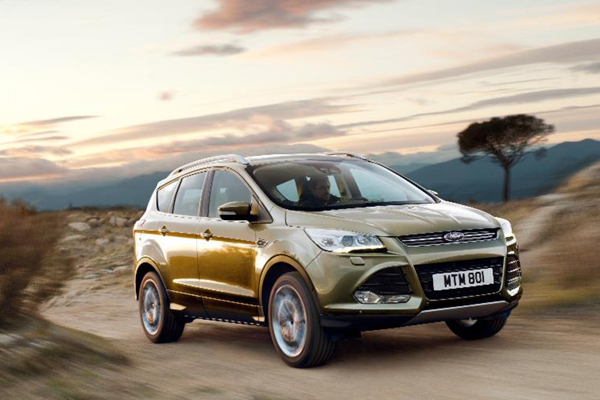 Massive Choice In This Category Makes It Hard To Stand Out

Ford Adds Much Content To Make The Decision Easier
rating: **** out of 5

For – handsome, high quality, practical
Against – So are lots of other competitors

VALENCIA, Spain – Sport Utility Vehicles were an endangered species not so long ago, looking doomed for the scrap heap because environmental legislation insisting on ever higher fuel efficiency threatened to make them unaffordable.

As far as I know, those rules were never rescinded, and yet every other new vehicle on the launch pad these days seems to  be an SUV, sometimes in Crossover disguise. (A Crossover is simply an SUV called a Crossover by the car companies to try and pretend they aren’t SUVs. This policy seems to be working) Maybe the crunch will come all of a sudden when new CO2 rules suddenly kick in 2015.

If that is so, lots of money will be lost by the mass car makers, not the least Ford, which has decided to make a big deal about SUVs because they are so popular. At the launch of Ford’s new compact SUV the Kuga, Ford said this –

“The all-new Kuga heralds the start of Ford’s delivery of a comprehensive SUV line-up in Europe.  It will be followed by the arrival of the modern and innovative EcoSport, Ford’s entry into the small SUV segment, and the Edge – a larger, more premium crossover that is a success in North America and other markets,” 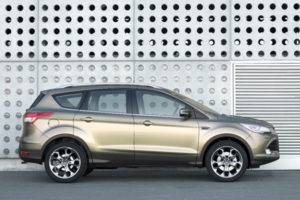 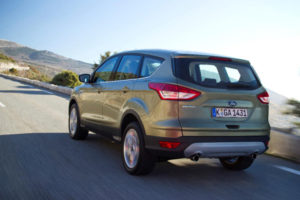 It even dropped the hint that its massive Explorer might be sold in Europe one day. Have I really missed a sea-change in environmental regulations?

Anyway, Ford said it expects to sell more than one million SUVs in Europe in the next six years with SUVs accounting for 10 per cent of all Fords sold in the region by 2016. Since launching the first generation Kuga in Europe in 2008, Ford has sold more than 300,000.

So on to the new Kuga. It’s certainly a neat looking car, without pushing any new appearance envelopes. The finish seems to be impeccable. Inside, the styling is certainly not German understatement, but the quality is just as good. Ford said it is offering lots of impressive safety technology, and the gimmicky hands-free tailgate, which first appeared on the Audi A6 Allroad. Much additional equipment has been made standard. The Kuga drives very impressively. It rides the bumps with aplomb and is very quiet, thanks to thicker glass.

Less noise
“The volume of road noise and wind noise audible has been significantly reduced compared with current Kuga to help deliver one of the quietest cabins in the segment. Improvements were delivered following the innovative use of elliptical acoustic mirrors to measure exterior elements that can influence the noise and vibration inside the car,” said Ford.

Performance of the main launch vehicle, powered by a 161 hp diesel with six-speed automatic comfortable, was very satisfying.

Kuga prices start at £20,895 – over £1,000 less than the previous model. That one is to be avoided because it has only front-wheel drive. Like its predecessor, the new Kuga will feature a three-series line-up  – Zetec, Titanium and Titanium X. 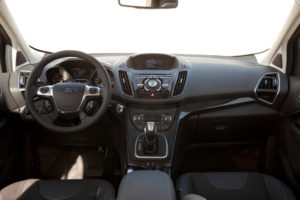 You can choose from a 148 hp or 178 hp 1.6-litre EcoBoost petrol engine, and 138 hp and 161 hp 2.0-litre TDCi diesel engines. All wheel drive diesels are available with six-speed automatic transmission.

There’s a range of driver assistance technologies including a parallel parking aid and a blind spot caution, which indicates with a warning light in the door mirror of a potential hazard is also available. There’s 82-litres more boot-space than the previous model, while the new Fold Flat Seating system enables over 200 litres of additional space.

Production of the new Kuga started late last year at Ford’s assembly plant in Valencia, Spain. The new Kuga is almost identical to its North American counterpart, the Escape.

Curve control
Ford seems especially proud of its Curve Control system, which acts as a safeguard for drivers who have entered a bend with too much speed. The system mitigates against severe under-steer by aggressive braking and can, if the driver is still pushing their foot down on the accelerator, also reduce engine torque. Ford’s hands-free tailgate can be opened or closed simply by a kicking motion beneath the rear bumper to either open or close the powered tailgate. That’s the theory. Models on the launch were reluctant to respond to this gentle, simulated kick, but hopefully that will be fixed on showroom models. The Kuga also features a panorama roof, which opens.

The Kuga was awarded a maximum five-star rating by Euro NCAP after achieving an overall protection score of 88 per cent, the highest-ever for a mid-sized SUV.

So you get bags of content, including hi-tech safety aids and nifty design ideas to pack in your stuff with ease. The 161hp diesel which I drove was terrific. It looks great, rides beautifully and is quiet. But then all these qualities probably exist in the list of competitors in the table below. I don’t have any idea which is the best. Probably the best way to make your mid up is to find your nearest dealer of whatever brand and do a deal there. 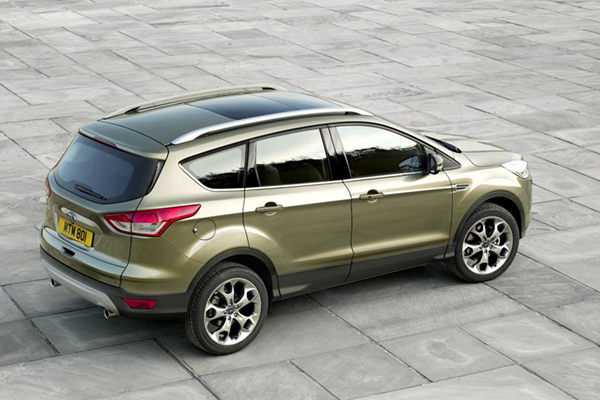 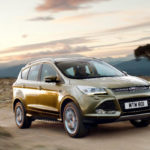 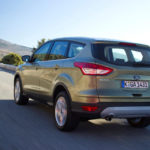 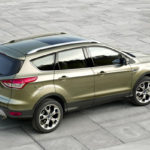 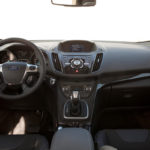 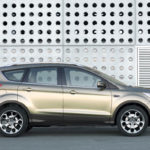