The Perfect SUV If Petrol Was Cheap 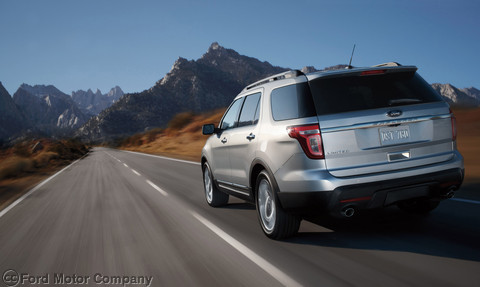 If It Was Cheap, Ford Would Be Importing This Magnificent Beast

“Curve Control sounds like an updated Victorian corset, but in fact it is an impressive safety idea which might save lives”

SCOTTSDALE, Arizona – On the flight into Las Vegas, I tried to prepare myself for the inevitable questions at the car hire desk. Would you like an upgrade? And what would you like to be upgraded too?

Given the inevitable befuddlement after an 11 hour flight, it makes sense to have this figured out. I decided that I’d like a big SUV because if you are driving a long way – it’s more than 300 miles to Scottsdale – there’s no better way to soak up the miles with a feeling of safety, serenity and luxury. Even if there’s only two of you. And of course in America a gas guzzler is no problem because petrol is still as cheap as chips. (about one third of the price in Britain).

I’d decided to go for a Ford Explorer. I love the way the new ones look, and it certainly qualified on the grounds of bigness. A Buick Enclave would be nice, a Chevrolet Traverse, or maybe a Jeep Grand Cherokee. To my amazement, the car hire people asked me if I’d like to upgrade to a BMW X3. I’ve never been offered a BMW rental before and certainly not in America, but given that the X3 is a puny and ugly little apology for an SUV it was easy to turn down. Yippee! An Explorer was available, even though it was in some new metallic green colour that wouldn’t have been my choice.

This was an Explorer Limited, an upmarket version, and the interior was very smart with leather and much high quality decoration in the cabin. Ford’s interiors now are almost luxury-like in their quality, and the Explorer certainly exuded the kind of distinction previously only found in upmarket German vehicles. The 3.5 litre V6 motor was quiet and gutsy. The six-speed automatic gearbox worked well, although on the highway on the rare occasions you need to kick down for an overtaking gear, the mechanism could have been speedier. But even though roads through southern Nevada seemed to be mainly two-track, the average speed of most traffic was around 80 mph with the 70 mph speed limit, so progress was fast. I managed an overall fuel economy of 18.6 miles per U.S. gallon, or 22.4 mpg in British measures, not a bad return when you consider a three litre diesel powered Audi Q7 would get you about 25 mpg.

Curve Control
The steering was light and accurate, although it did wander slightly giving a reminder that this was not a German vehicle. The suspension works a treat, with very little roll noticeable in fast cornering. I can’t vouch for it but, the stability on curves could have been down to the Curve Control feature, which slows the vehicle by up to 10 mph if a corner is being taken too fast. Curve Control sounds like an updated Victorian corset, but in fact it is an impressive safety ideas which might save lives. 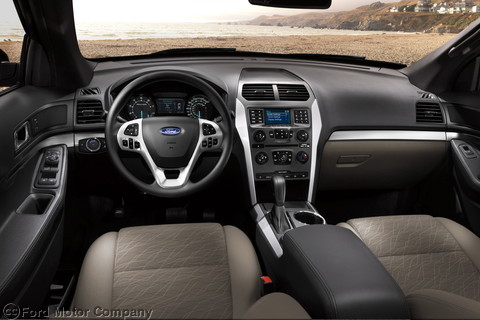 The four-wheel drive system is very sophisticated, with a little wheel selector if you need to over-ride the car’s computer. You can select snow, sand, mud or normal mode. The system is clearly a straight lift from Land Rover’s Terrain Response system, no surprise either given that Ford only sold its Land Rover subsidiary to Tata of India in 2008. You can’t blame Ford for making sure it extracted maximum value from Land Rover. Needless to say, I let the computer do the work in “normal” mode.

The Explorer was packed full of gizmos, but after wrestling mentally with the hi-tech radio and only eventually getting any logical response I never bothered with the cruise control or mobile phone-mating technology. Not surprisingly, there’s masses of room inside, and the Limited version has a third row of seats. The price of the Explorer Limited is a mere $39,995 (£24,550) before tax, for a car as big as a Range Rover. Now I’m not suggesting that this is a match for a Range Rover, but at less than half the price, it does seem to have a lot going for it. Ford doesn’t sell this in Europe, only selling the little Kuga compact SUV. That’s a shame.

Driving in America, at least in the south-western states, is a pleasure, with many fast roads and little obvious sign of law-enforcement. The one traffic camera on the Scottsdale section of the Phoenix ring-road, highway 101, has been removed. It had been sited on a slight, down-hill four-lane stretch where it was easy to breach the speed limit and many people were fined for doing nothing remotely dangerous. But popular clamour that this was unfair and pointless forced the camera’s removal. Oh to live in a country that responds to its citizen’s wishes. The drive back to Las Vegas went through Lake Havasu City, with its rebuilt London Bridge. The desert roads as you approach the City from the south are spectacular. If you get bored with the natural features, the mile-long freight trains will distract you for a while. Just where is all that stuff going and where did it come from? 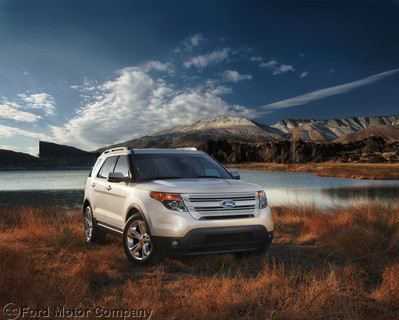