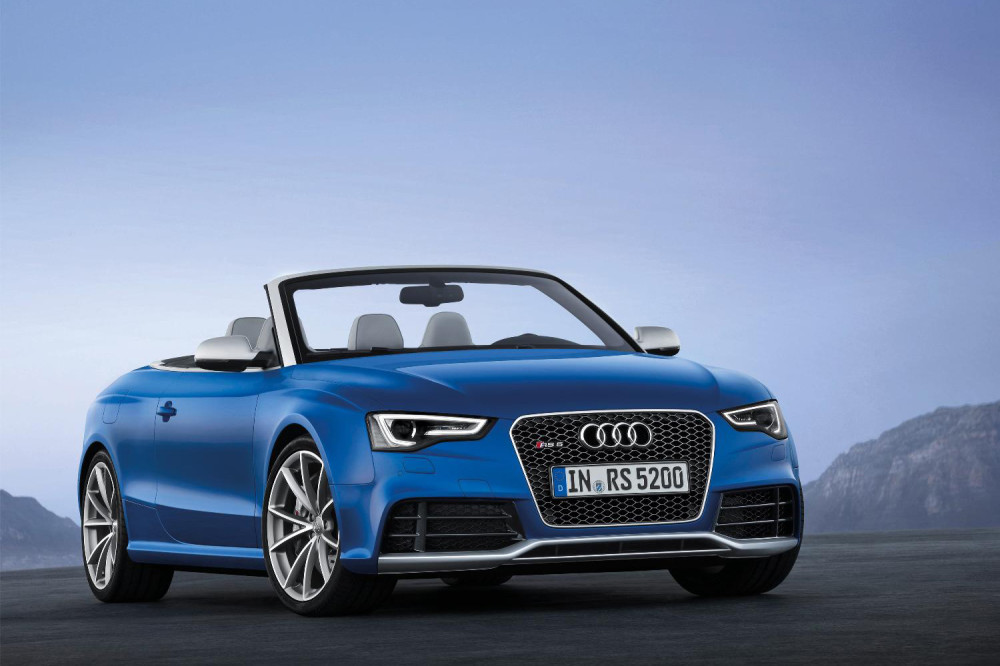 Hot-Rod Convertible
Understated Elegance, Until You Put Your Foot Down

For – beautifully engineered convertible with fabulous performance
Against – why develop qualities that can never be used?
rating **** out of 5

As the temperature in Britain moves back, briefly, to civilised levels, perhaps your thoughts are returning to buying that convertible you’ve always promised yourself.

I can recommend one if you’ve just won the lottery and have £70,000 to spare, or perhaps you’ve recently been made redundant by a bank or the BBC with plenty of tax-payer’s money to burn and a fat pension to luxuriate in.

The Audi RS5 Cabriolet is a beautiful two-plus-two convertible with a traditional cloth hood, and is just the job. It has a magnificent 4.2 litre V8engine which sounds scary when roused but is a pussy cat when left to amble along. If you think that the ride is unnecessarily flexible and comfortable and want to suffer a little, you can opt for Dynamic Ride Control as part of the Sports Package (£2,250 which includes bigger wheels and sports exhaust). 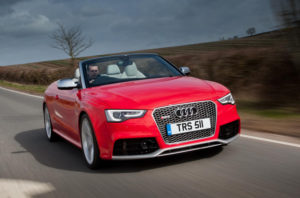 Select “Dynamic” mode and that will rattle your fillings and dentures, or more likely if you can afford the car, loosen your implants. “Dynamic” tightens everything up from steering to suspension and throttle responses, and even induces a blip in the throttle to make it sound as though you are moving down through the gears manually. (There’s a seven speed automatic gearbox) It also adds a more bass-heavy growl to the sound of the V8. If you really want to show your fearless, macho qualities, you can choose the extra which tweaks the top speed up to 174 mph from the standard limit of 155 mph. I wonder if any one actually goes for that, and what kind of people they are? And it can’t be good for costs because presumably the insurance company will have to be informed. How will insurance suits react to a request from  someone who admits he wants to drive at close to 280 km/h? 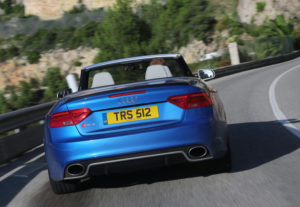 Which brings me to the whole question of high-performance cars. All those highly trained and world class engineers at Audi, not to mention BMW, Mercedes and Ferrari, spend their whole careers diligently producing the most amazing high quality products which will never get close to being used to their capabilities. Isn’t that a ridiculous waste? All these cars that can cruise all day at 155 mph-250 km/h, and corner like go-carts, will never actually do anything like that. That must be almost as frustrating as being a security operative at an airport. If you work for 40 years you will never actually find a bomb or explosive device (not least because political correctness means you won’t be able to frisk people who actually look like bombers, but that’s another story). Security operatives can at least justify their existence by kidding themselves that they are deterring would-be bombers and protecting the public. How do the world’s best engineers console themselves when they face up to the pointlessness of their endeavours, I wonder.

And the RS5 Cabriolet is magnificently pointless. A much less powerful and cheaper version would do just as well, and even this probably wouldn’t ever get close to its limits. But if you’ve got oodles of cash you have to flaunt it on something, and this Audi is as good a place as any. It looks elegant and the quality of the interior and build is top class. It has a cloth hood, which takes up less storage space than a folding steel roof. You will of course lose an element of security in case of an accident, or an attack by vandals. You don’t have to stop if the rains come while you’re driving along; the hood will deploy at speeds up to 31 mph, says Audi. Audi also says it takes 15 seconds to close and 17 seconds to shut. I didn’t have the energy or the inclination to test those times, find out why one takes two seconds more than the other, or why Audi decided to reveal that the times were different. 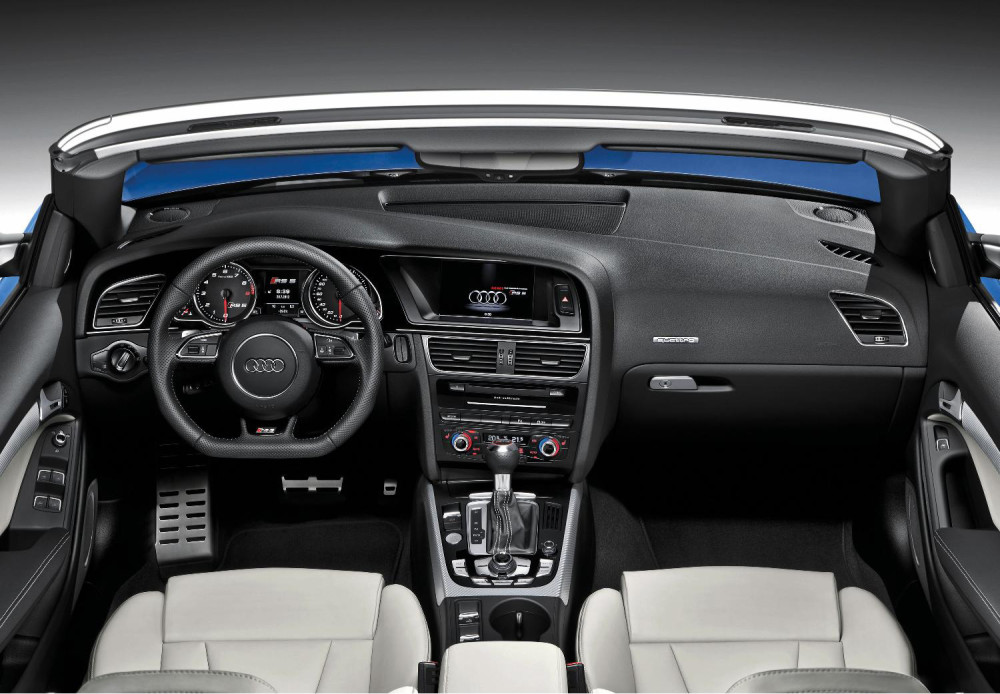 Relentlessly metric
The exterior design hasn’t changed much from the coupe, although it has wraparound LED daytime running lights, LED rear lights, new-look front and rear bumpers and 19-inch wheels in a new 10 spoke design. You can pay a bit more for 20-inch ones.  Every bit of data from Audi is relentlessly metric. Even the traditional 0-60 mph times now have to conform to kilometre equivalents of zero to 62 mph. But not the size of the wheels. There’s another conundrum that won’t be answered here. The three-spoke steering wheel has a flat-bottom. You have to pay extra for adaptive cruise control with emergency braking, blind spot monitoring, lane assist and lane departure warning. You can have “launch control” to get the maximum zip from rest, and adaptive lighting, which points round corners.

But the real reason for splashing out the extra ducats is the fabulous engine. It sounds spectacular when you put your foot down, and the car reacts as you’d expect; lightning fast, instant response. The handling was immaculate, at least on local roads where speed limits are low. The four-wheel drive is a reassuring feature. The auto box changes as quickly as you’d expect, and there are paddles to override the auto if you feel like it one day. This version is lower than the standard A5 Cabriolet by 20 mm, apparently, and the suspension has more high-tech content. You can opt for ceramic brakes.

So the sun is about to shine. Your payoff is earning 0.1 per cent interest. Why not splurge it on a Audi RS5 Cabriolet? 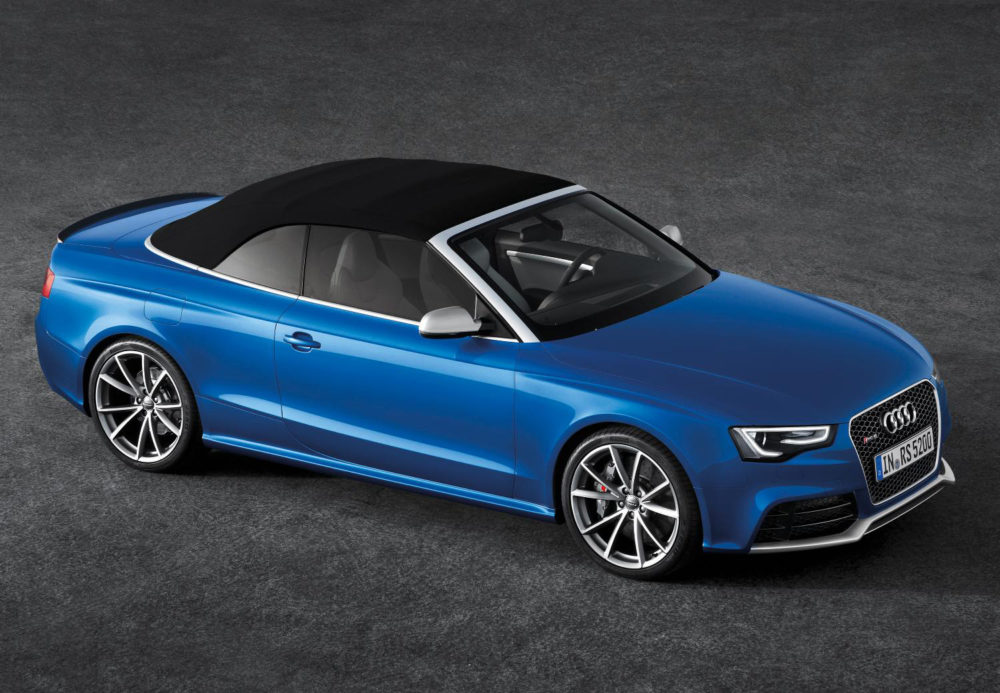 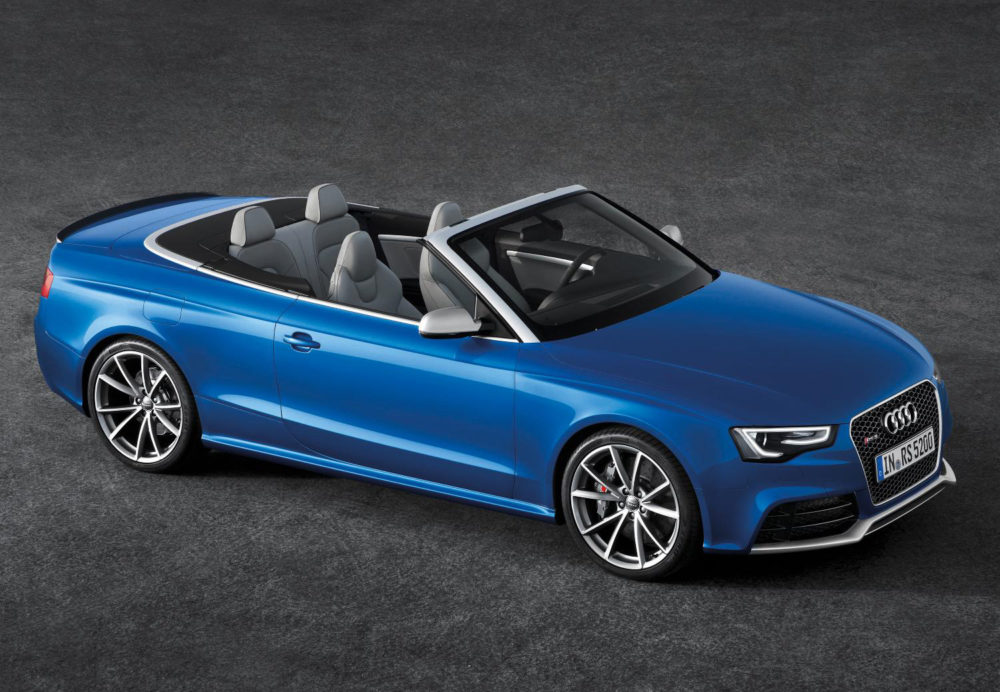