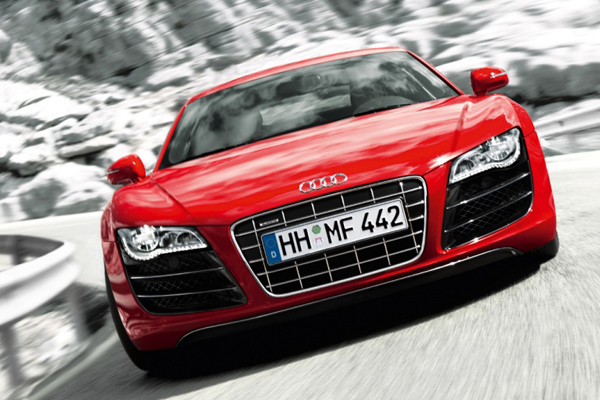 If You Think The Audi R8 Lacks Poke, You’ll Love The RB V10

After all, the original 4.2 litre V8 direct injection petrol engine develops 420 hp and slingshots the car from rest to 62 mph in 4.6 seconds, and on to a 187 mph top speed.

But that’s not good enough for Audi.

I’ve been driving the car on the freeways and mountain roads in this southern Spanish province of Andalucia. My first thoughts on learning that Audi, the premium car making subsidiary of Germany’s Volkswagen, was making a faster version of the R8 was, why bother? The R8 was already way too fast for normal driving on regular roads.

But driving the V10 version is exhilarating. Sure, it’s mad, and I suppose it won’t be long before cars like this are made history, as the slab-faced fascists in the “green” movement make sure cars are merely safe, economical golf-carts in disguise. Meanwhile, wallow in the wail of the 10-cylinder motor. The power and performance is simply amazing. Its low-slung design makes it feel literally glued to the road.

Differentiating the V10 visually from the V8 are the all LED headlights, bigger wheels, and oval exhaust pipes.  You can opt for either a six-speed manual gearbox, or an automatic, sequential shifter.  The race-bred (‘R’ stands for Racing) R8 is built on a light-weight aluminum space-frame, and brings together much ground-braking technology, borrowing a lot from the Lamborghini Galardo, which also, like Audi, is part of the VW empire. The design is based on various Audi successes at the Le Mans 24 hour sports car race. 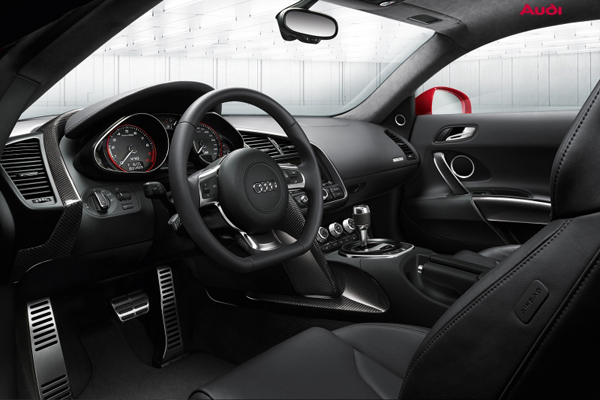 The suspension uses Audi’s “magnetic ride” system using a fluid containing minute magnetic particles for inducing lightening-fast changes to the front and rear double wishbone suspension, which absorbs bumps and flattens out the ride much quicker than conventional methods.

The engine is mounted, longitudinally, directly behind the drivers head. If you wonder what that means, Audi thoughtfully provides a plastic see-through cover so you can see which way the engine is pointing. 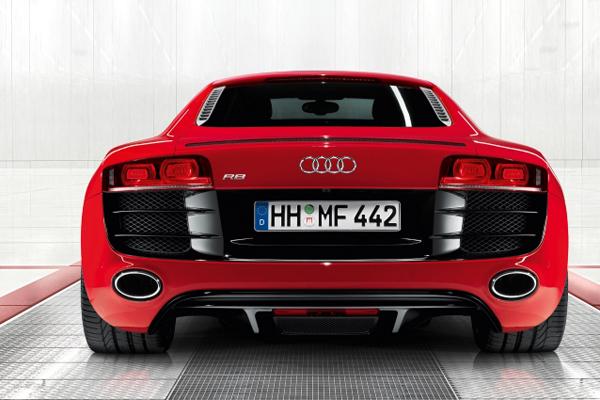 But nothing is perfect. It’s hard to see out of the back, or to spot cars approaching from the left when you merge on to a highway. And Audi persist with its claim that there is room for two sets of golf clubs behind the seats. Stretching the point, there might be room for some golf clubs, but certainly not a driver, and forget putting them in a bag. I’m sure anyone buying this car will have enough green stuff to buy a membership and leave their clubs there. I think this must be a mild Audi wind-up.

If what you’ve read has excited you into thinking about buying an R8 V10, and you hate golf, I’m sorry to tell you prices will start at just under £100,000. 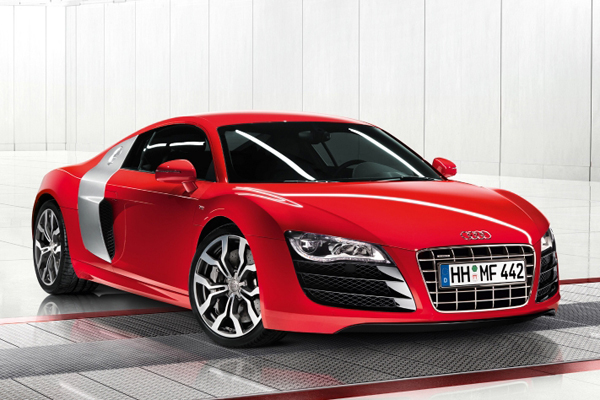 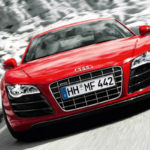 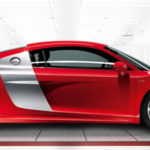 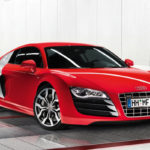 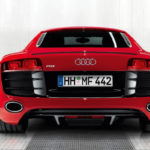 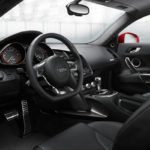