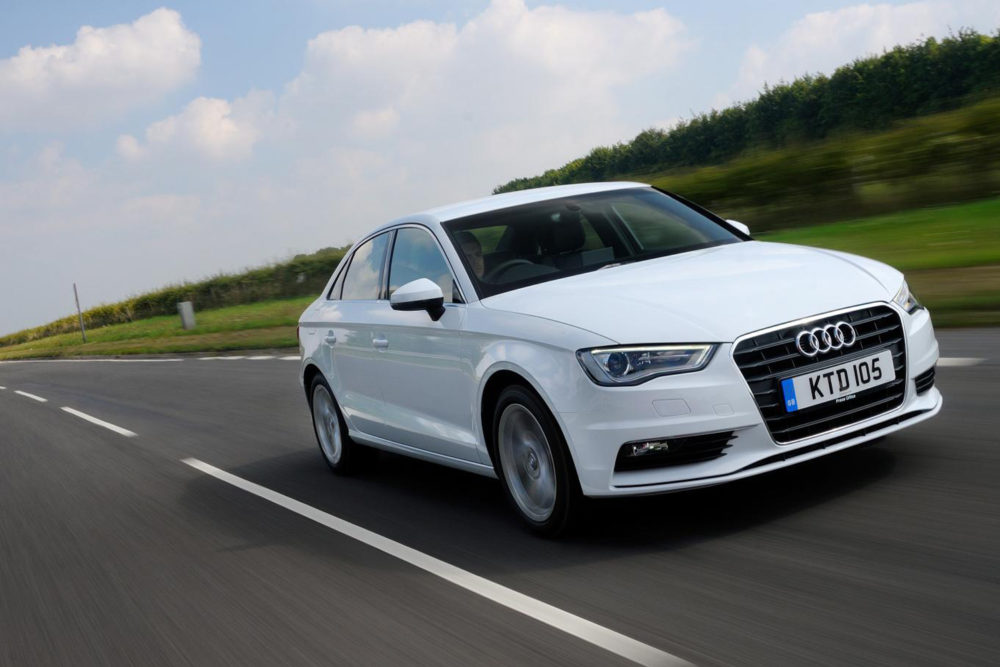 Booted Version Adds To The Range.

Rich Choice Of Options, Or Is That Bewildering?
Competition Is Fierce – BMW, Mercedes, Lexus, And Don’t Forget Golf.

Audi is making a saloon version of its A3 hatchback mainly for America and China, but it is also on sale now in Britain too. 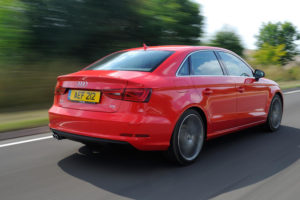 The saloon is a little bit wider, longer and lower than the hatchback, and with its traditional Audi looks, the first impression will possibly be that it is really an A4 in disguise, a larger model and a BMW 3 Series competitor. But the A3 saloon will be competing under that level and against cars like the Mercedes Benz CLA, BMW 1 Series, Lexus IS 250 and Volvo S60. The saloon version now means that there will be four versions of the A3, including the three-door hatchback, five-door Sportback and convertible which goes on sale next year.

Audi said the A3 saloon has shed weight with the use of much aluminium in what it called a steel hybrid body construction. The interior is of high quality and internet connectivity will be matchless, if that turns you on.

Prices range from £24,275 to £28,105, which seems mighty expensive to me, especially when you consider Audi expects to sell versions heavy with “extras” on top of this. Stop Start is standard across the range. At launch there are two petrol engines and one diesel, the 1.4 litre 138 hp with Cylinder-on-Demand technology, 1.8 petrol 178 hp and a two litre 148 hp diesel. Later there will be two more diesel engines, a 1.6 litre 104 hp and a 2.0 litre 182 hp. Audi was especially pleased with its Cylinder on Demand technology which, in the 1.4 litre petrol engine, shuts down two of the four cylinders at low speeds to save fuel. The remaining two cylinders speed up and this also improves efficiency. All of this happens without the driver hearing or feeling a thing. If you floor the accelerator, full power is instantly and imperceptibly available. On the cutting edge of technology, to be sure. 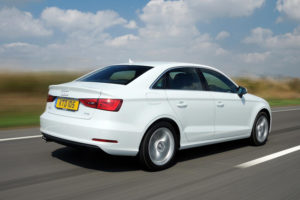 This 1.4 Sport version was certainly my favourite of the initially available cars with the 7-speed automatic gearbox. Performance and handling was terrific, the auto box brilliant. This “basic” model has equipment like dual zone electronic climate control, sport suspension and aluminium inlays and styling elements. Pay another £2,150 for the S line version, and you can luxuriate with goodies like bigger wheels, Xenon headlights with LED running lights, brushed aluminium inlays, and chrome tailpipes.

The boot’s carrying capacity amounts to 425 litres with the seats up – 45 litres more than the A3 Sportback. This capacity can be increased by folding down the split rear seat backs. The boot lid automatically swings upward when unlocked.

Depending on the engine chosen, the standard transmission is either a manual six-speed or the S tronic dual-clutch gearbox, that’s the automatic to you and me. The S tronic shifts without any noticeable break in propulsive power, and is controlled by either the selector lever or paddles on the steering wheel. The ‘D’ for Drive setting is programmed for maximum fuel economy, and when in efficiency mode can free-wheel, which further reduces fuel consumption. For more energetic driving, there’s S mode with its higher shift points.

Clean lines
“The interior of the Audi A3 Saloon is characterised by clean lines and impressive attention to detail. The slender instrument panel with its curved front and the driver–oriented centre console epitomise simplicity and understatement,” says the Audi blurb. Can you imagine a set-up which wasn’t driver oriented? 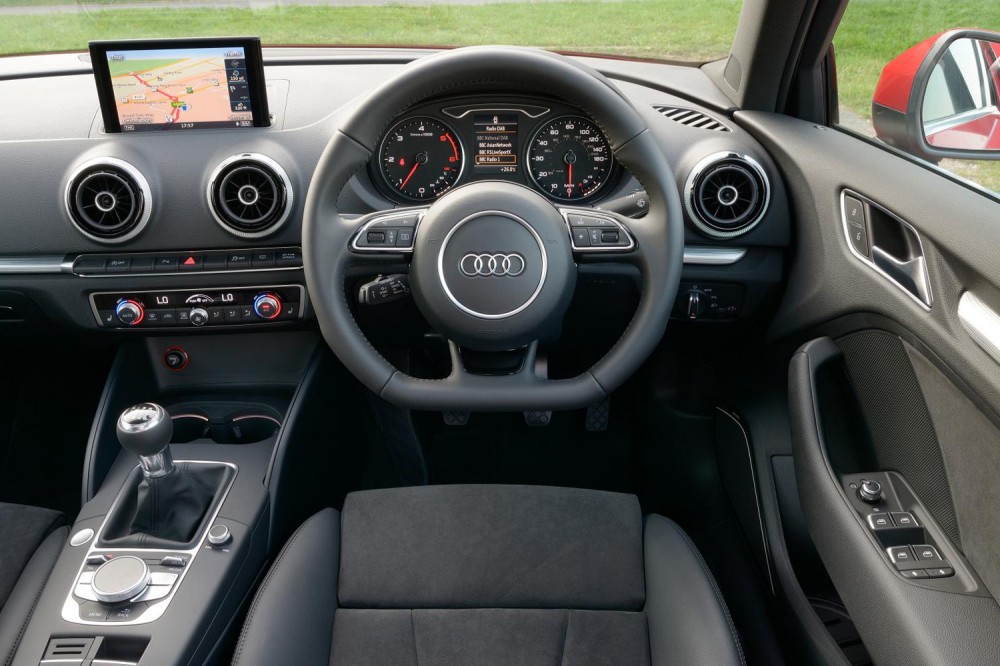 Audi makes much of the car’s connectivity, and there’s a big screen which emerges from the central dashboard which uses a dial and buttons to control everything including the satnav (£495), phone and music.

Many more comfort and convenience options are also available, including a panoramic glass sunroof, the advanced key access and authorisation system, and adaptive xenon lights.

Audi offers some interesting benefits which promise savings in long- run running costs, at a price. You can opt for a 3 year, 30,000 service plan for £400. That sounds excellent value to me considering that my Honda Jazz seems to cost £400 for its service every year. You can extend the guarantee by 4 years to 75,000 for £245, or to five years for £545. Audi promises residual values will retain about the same amount as a Mercedes CLA. It says the 1.4 petrol engine will return average fuel consumption of 60.1 mpg, compared with 51.4 for the equivalent Mercedes CLA and 39.8 for the Volvo S60. I wonder.

Volvo can’t hack it
If you are in the market for a car like this, obviously the Mercedes CLA, BMW 1 Series and Lexus IS250 would loom large. I’m not so sure about the Volvo, which is still trying to make it in the premium sector, but which simply doesn’t have the appeal to make it. The CLA is the prettiest, the 1 Series might persuade those more interested in performance (not that it is any faster than the opposition, just better at pretending it is). My inclination would be to go for the Lexus. It promises better value for money, rock-solid build quality, and a much simpler, less complicated choice for the buyer. The choices when you start examining the possibilities of the Audi will spin the brain.

Then of course there is the rational contender. Under the skin, the A3 is more or less identical to the VW Golf from its parent company, but costs thousands more. So Audi must be getting a little nervous that as it expands its fleet, not only is there a danger of encroaching on the next model up in the hierarchy, the A4, but also the Golf, applauded by many for its design and high quality. It makes sense to go for the Golf if you want value for money. 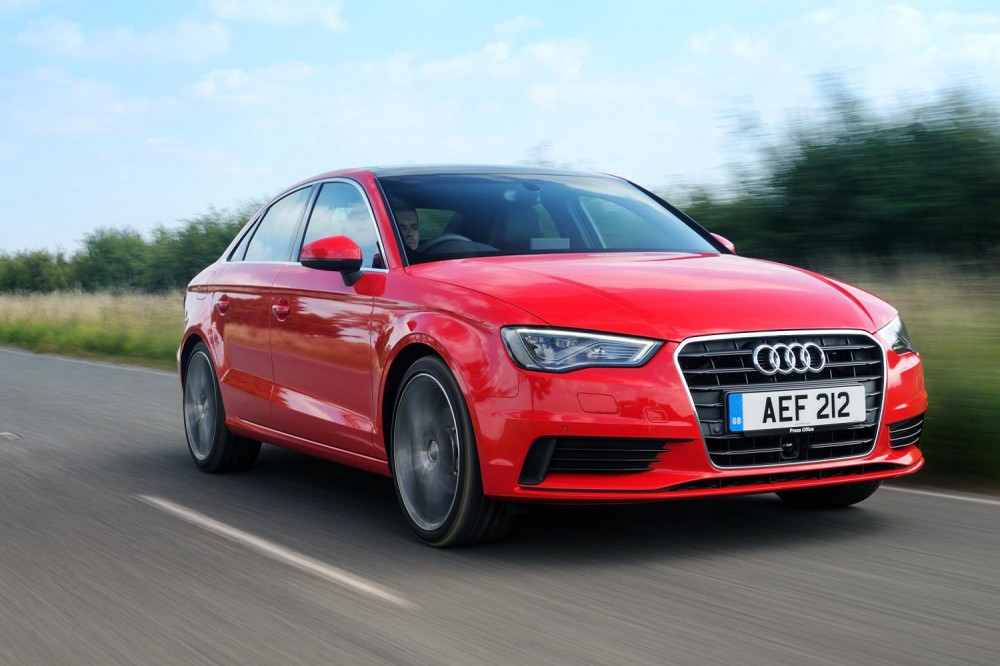 And hatchback versus saloon? I don’t think the A3 with a boot looks particularly attractive, so I’d go for the hatchback and the extra loading flexibility.