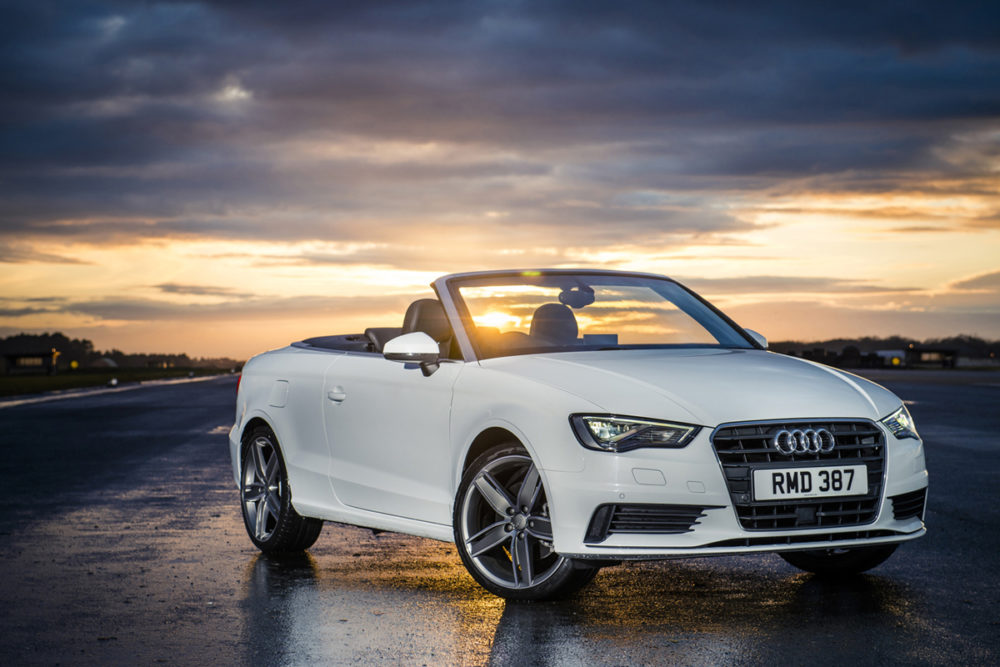 CHRISTCHURCH, Dorset – The clocks have gone forward and it’s time to think about open-air motoring again. As ever, Audi is right on the money with its timing and it has renewed its little A3 convertible, providing a classy if pricey candidate for top-less driving. 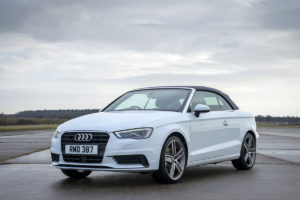 There is a distinct lack of small convertibles now. They are expensive to produce, and only premium manufacturers can hope to make any money out of them. There are bigger and even more expensive options like the Audi A5 cabriolet, BMW 3-series and Mercedes C-class convertibles. And when you think of the concept – removing the roof to allow the wind in your hair  – it can’t be too long before some European Union sponsored elf ’n safety jobsworth with a clipboard decides that this is just too dangerous and must be stopped; purely in your interests of course.

But if the Met Office is to be believed and with global warming apparently about to tighten its grip, the case has never been stronger for buying a car with the ability to jettison its roof. The Met Office has a pathetically incompetent forecasting record, and its latest attempt says not only that it might rain a lot, but it might be much hotter than ever; that winters will be warmer and wetter, or if not perhaps colder and drier. Given that nobody yet is very good at predicting the weather, the A3 cabriolet will transform itself from weather-swept open top to a cosy, snug roofed area, so you can’t really go wrong. 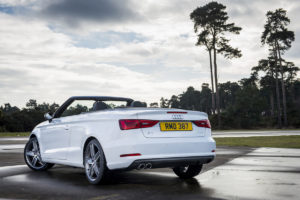 The latest A3 cabriolets aren’t all as expensive as the one I’ve driven, which comes in at an incredible £38,860, and prices start at a more reasonable-sounding £25,790. What does Audi provide over and above the base model to get to this astronomic number? Well, there’s a bigger engine, the leather interior costs almost £800, the technology package with mobile phone and satnav almost gets to £2,000, and various things like heated front seats, adaptive cruise control, computerised parking and electric lumbar support boost the price (must check on what “Audi pre-sense basic – £200”, and “First registration fee – £55” are all about).

The car drives well, as far as I could tell from the area where the car was launched, which was a New Forest combination of 40 mph coasting along and the odd blast down a motorway. The interior was high quality as you’d expect. I wouldn’t want to ride very far in the back of this notional four-seater. The competition in this sector doesn’t amount to much in terms of numbers, with only the BMW 1-series mounting a challenge. The VW Golf convertible is a cheaper option, and has a lot in common under the skin with its Audi brother. There’s the Mini convertible too.

You can choose from a couple of petrol engines and a diesel. There’s a 1.4 litre petrol with “cylinder-on-demand”, which shuts down two of the four cylinders when not much power is required, and a 1.8 litre. There’s a 2.0 litre diesel. You can choose from SE, Sport or S line specifications.

Wider, longer
This new version is based on the recently introduced new A3 saloon, which is little bit bigger than the old one and therefore makes more space available for complete concealment of the fast-retracting powered fabric hood. The hood opens in 17 seconds at up to 30 mph. When retracted at the touch of a button, the top – complete with heated glass rear window – rests in a tray that barely affects luggage capacity, of 275 litres. More expensive versions have a more sound-absorbent acoustic soft top with three-layer inner padding, available in black, grey and brown. Its roof liner can be specified in black or lunar silver. In all versions, an active rollover protection system consisting of two spring-loaded plates are recessed into the body to protect you in case of a rollover accident.

The new basic A3 Cabriolet weighs just 1,365 kilograms – around 50 kilograms less than its equivalent predecessor despite its increased dimensions, thanks to much use of aluminium. Even taking into account special reinforcements to maximise torsional rigidity, the body weighs 30 kilograms less than previously, helped by its aluminium bonnet. 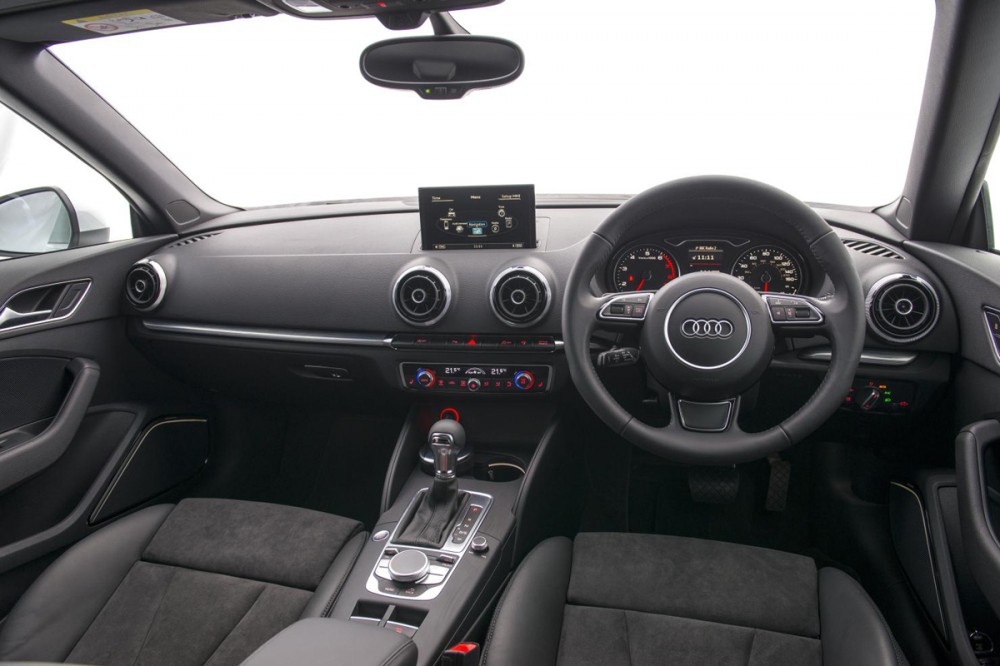 The 1.4 litre, 138 hp petrol engine has a six-speed manual transmission. The 1.8-litre, 178 hp petrol engine has a seven-speed automatic box, which can free-wheel to save juice. Audi claims this configuration will deliver up to 48.7 mpg. The two litre 148 hp diesel is said to get 67.3mpg. Later A3 Cabriolet customers will be able to choose from an extended list of engines and transmissions, including a 1.6 litre diesel (up to 74.3mpg), and a more powerful version of the 2.0 TDI with 182 hp, which will be available with either front wheel or all-wheel-drive. Later, there will be a 295 hp S3 Cabriolet.

It used to be the case that coming out with a convertible version was a natural move to complete the range. Maybe the huge costs of making sure the body is still rigid after you take the roof off is now prohibitive. Only premium manufacturers can add the big markup to the price of the standard version for it to make any financial sense. As for the Audio A3 cabriolet, it is expensive for a little car, but if you’ve got money to burn, why not er, burn it? 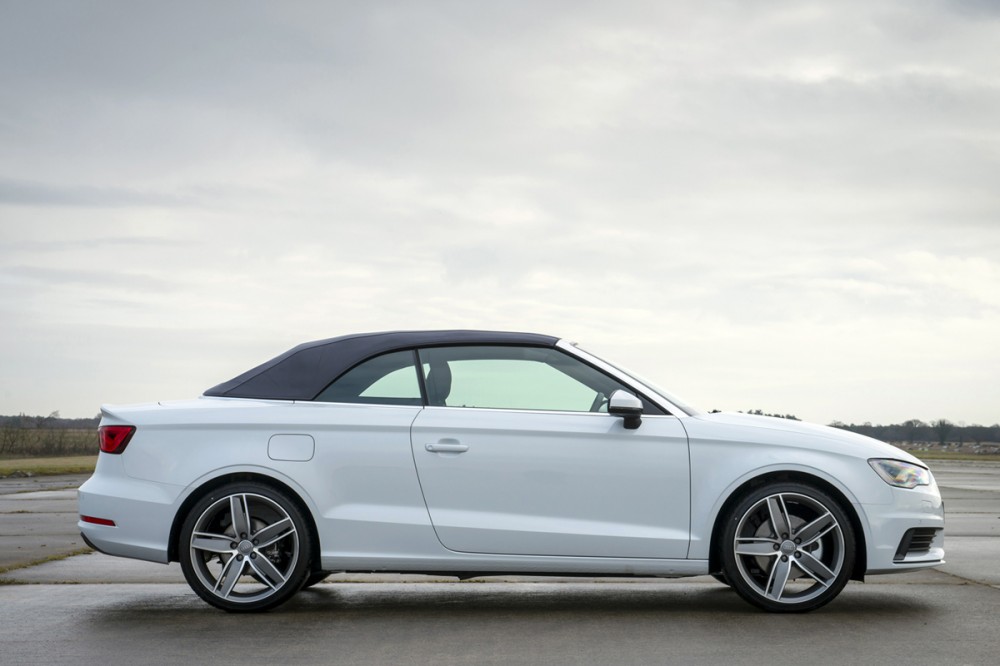