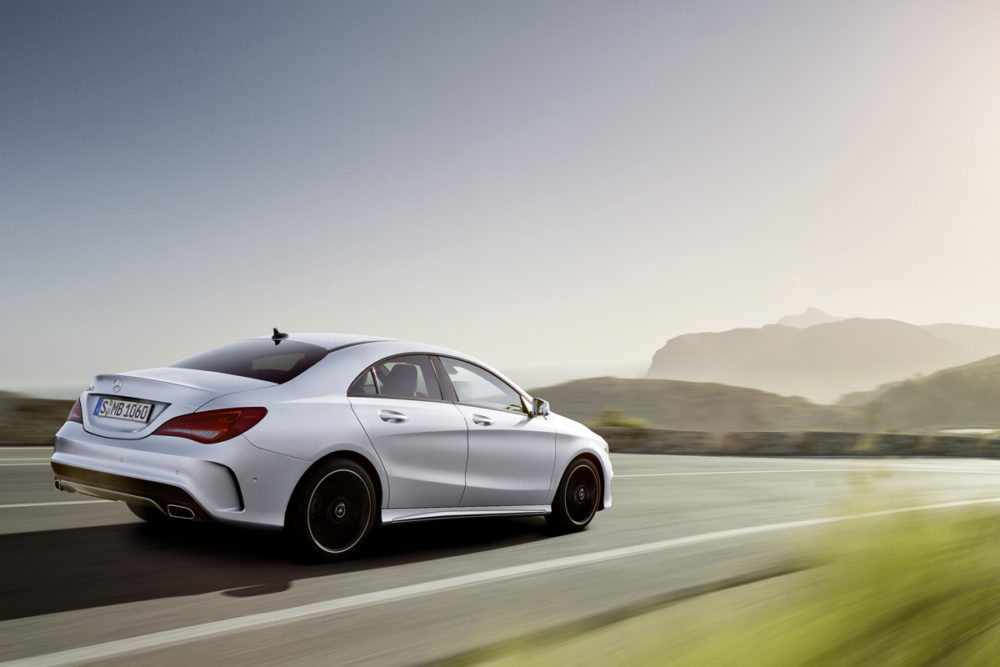 Design Stands Out As Beautiful Compared With Bland Opposition.
Is That Enough To Triumph? Probably.

Against – technology needs to be tamed.

The new CLA is part of the new breed of small Mercedes designed to be eye-catching, sexy and fast as well as smart-phone friendly, in contrast to its previous efforts in this category which were utilitarian, anonymous, and probably couldn’t connect to anything. The CLA should finally allow Mercedes to compete with sector leaders like the BMW 1 Series and Audi A3. 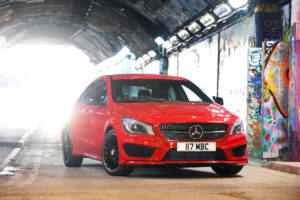 Mercedes Benz used to have trouble selling its small cars because they were dull and boring to look at, even though they might have been just as good as the competition on the road. Mercedes has fixed that and then some with its beautiful little A class, and showed that it really means business with the CLA, which is an A class with a boot, but what a boot.

I first saw the new CLA at the Detroit Car Show a year ago, and its zingy, swoopy lines coupled with its traditional engineering spelt success writ large. Mercedes not only has managed to get the looks right, it has also refocused its attention on modern buyers, and the new CLA is aimed at winning sales from those who value computer connectivity as much as autos themselves. 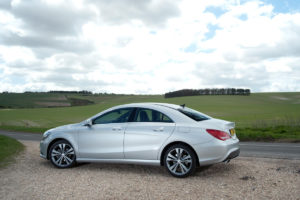 The new CLA’s body is highly aerodynamic with a drag coefficient of only 0.22. Despite its four-doors, Mercedes insists on calling it a coupe. That’s a classic oxymoron, I think. The design makes it look like a scaled down version of the Mercedes CLS, itself an attempt to make the worthy but dull mid-size E class saloon look a bit more trendy. CLA buyers can choose petrol engines from 1.6 litres and 122 hp to 2.0 litres and 211 hp. There are hotter AMG versions available too. There are two diesel choices, a six speed manual gearbox or a seven speed auto box. Prices start at £24,355. There are two model lines in the U.K. – Sport and AMG Sport. The cars are packed with standard high technology equipment including radar-based collision prevention and attention assist drowsiness detection. Pay a little more and you can have Lane Tracking, automatic parking, or four-wheel drive. And naturally all models integrate Facebook and Twitter.

The CLA drove very nicely. The diesel engine has masses of quiet, flexible power. The interior was very smart and the dashboard simple and elegant. The seven speed auto box was quick and unobtrusive. The boot was on the small side and was a weird shape, and I had to fold down one of the rear seats to get my golf clubs in. Headroom in the back was not very generous. The stalk arrangement had me confused at first, when I knocked the car out of gear thinking the stalk was the direction indicator. I would soon get used to that. I had to consult the user guide to find out how to turn the headlights on full-beam, and open the fuel filler cap. You have to brush across the surface in a rearward direction to open it (the fuel cap that is). I don’t know why.

The safety technology seems to work; I got a bit too close to the car in front once and the system instantly braked, tightened the seat-belts (close to throttling mode) and turned on an alarm. When the system detects a car in your blind-spot, little red disks light up in the mirrors. The trouble is, they came on driving down one-track narrow lanes for some reason. Oh yes, and the digital radio. I live in a poor reception area, and the digital radio constantly cuts out. Not exactly an advance in radio delivery. There is so much technology in the car that the local dealer really ought to earmark a day to tell you all about it. Intuitive it ain’t. 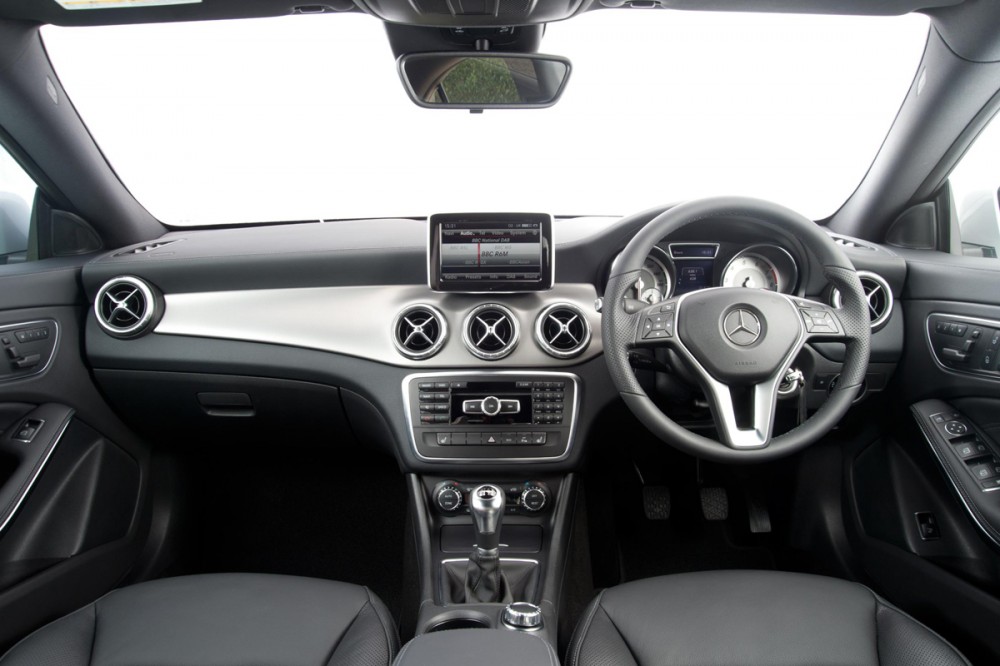 Ludicrous
Fuel economy was a very acceptable 41.25 mpg, although Mercedes couldn’t resist exaggerating. Its claim of 62.8 mpg was ludicrously  overstated by 34 per cent. Given that they’re all at it, Mercedes can’t be singled out, but they will all pay for this one of these days.

Mercedes says there is plenty of room for five – which I would question – but undoubtedly two people of less than 5 feet 10 inches would be very comfortable in the back. Mercedes says standard equipment is generous, including –

You can personalise your CLA with the Exclusive package, priced at £1,970 for Sport and £1,640 for AMG Sport variants. The Exclusive package consists of an Artico artificial leather upper dashboard with topstitching, leather upholstery, four-way lumbar support in the front seats, velour floor mats with edging, armrest with topstitching and headed front seats, which come in a choice of three colours. 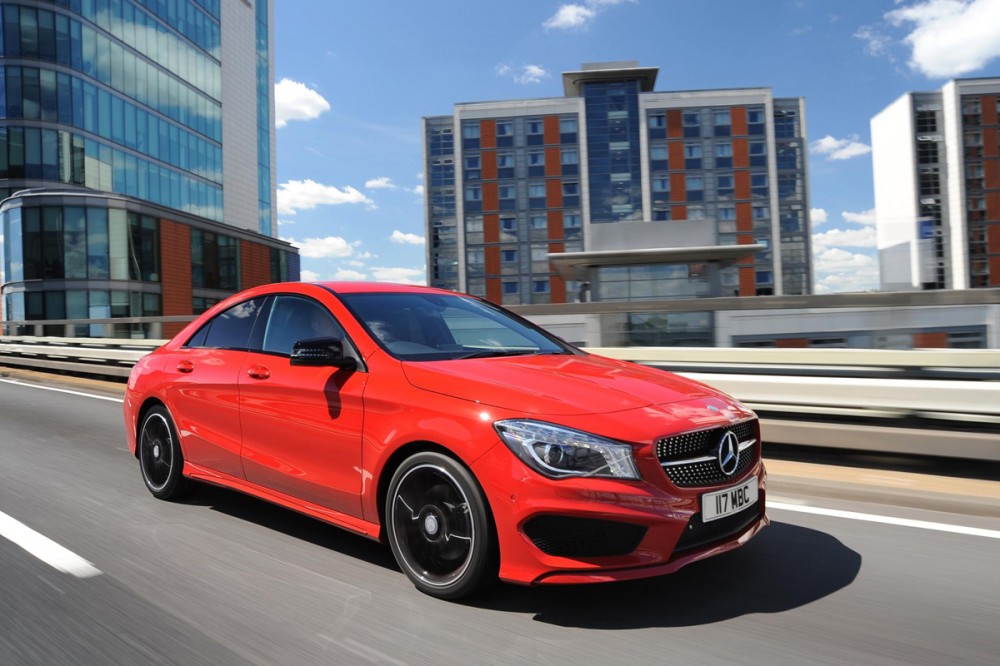 Pressure now on Audi, BMW
The CLA and the smaller A class have put a marker down for Mercedes. It will no longer be overshadowed by its rivals Audi and BMW in the styling department. Engineering and driveability are no longer enough. Future Mercedes will sell much more on passion and visual appeal. Until now, Audi and BMW small cars have used understated designs which was enough to corner the market. Expect their next small cars to be a lot more eye-catching. If they’re not, Mercedes will leave them in the dust.