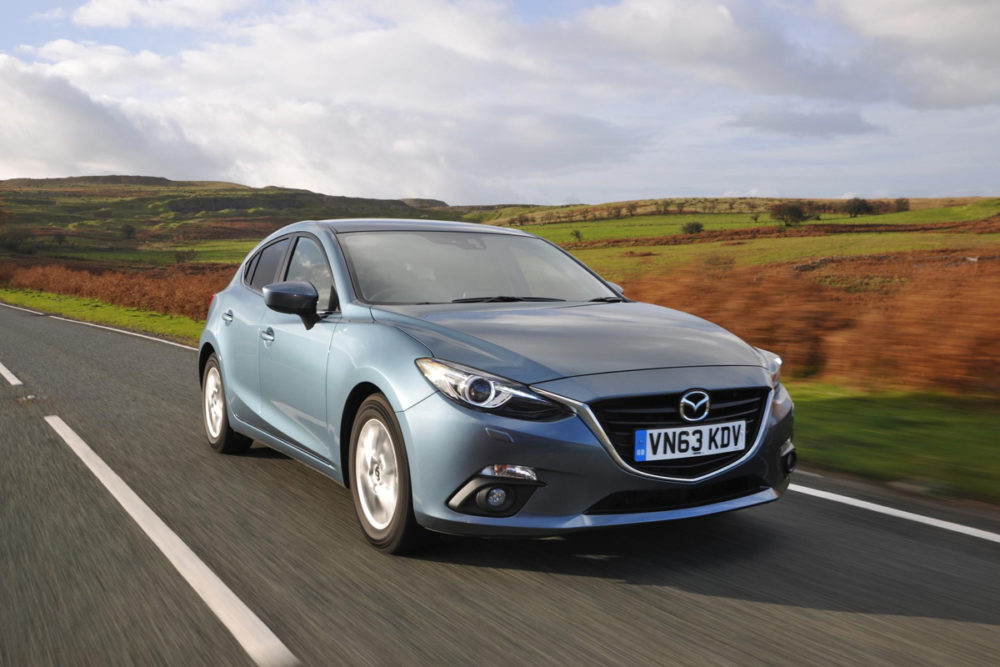 “if you want style, reliability, value the Mazda3 is a strong contender”.

WICK, Scotland – Mazda of Japan is one of those small, low profile car companies that you can forget about if you’re not careful, but if you’re in the market for a family car you’d be wise to give it a chance.

The Volkswagen Golf, Ford Focus and possibly the Peugeot 308 might be the first motors that spring to mind to potential buyers in this sector, but if you want style, reliability and value for money, the new Mazda3 is a strong contender. 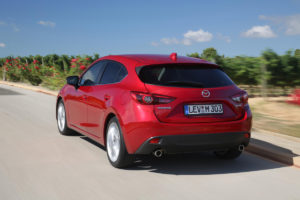 It’s a wonder that Mazda still survives, given its relatively small volume and the fact that it lost the support of Ford, which finally disposed of most of its shares three years ago. Given that mighty Ford shared some of its research and development budget to allow Mazda to develop its most important models like the Mondeo-class Mazda6, CX-5 SUV, and the previous Mazda3, you might think it now would be on shaky ground. And it did lose a lot of money until recently, threatening its existence and prompting speculation that it might join forces with other minnows like fellow Japanese Suzuki or perhaps Mitsubishi, or be taken over by one of the giants.

But thanks to new cars like the much acclaimed Mazda6, and a huge dollop of advantage from Japan’s policy of devaluing the yen, the company is currently thriving, despite being encumbered by fatuous marketing slogans which must put potential customers off. For years, we’ve endured mindless repetitions of Zoom Zoom with every Mazda statement. Now we have the equally meaningless and opaque use of SKYACTIV which accompanies every attempt to improve Mazda technology. If that doesn’t gross you out, Mazda tells us that KODO, the Soul of Motion design theme, is brought to a dynamic new level on the Mazda3. Give us a break. 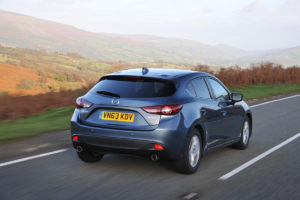 But we mustn’t let the activities of mindless marketing men put us off products, and the new Mazda3 is very nice. It is a five-door hatchback or four-door fast back and is lighter and livelier than its predecessor. The body looks sleek and the interior exudes quality. The version I drove – the Mazda3 2.0 Sport Nav Automatic to give it its full name – even had a head-up display to give direction for the satellite navigation and remind you of speed limits. This displays the data as a hologram in the driver’s line of sight and appears as though it is just above the bonnet. This version, which sells for £22,455, had a lovely leather interior, and high tech stuff like lane-departure warning, high beam control, and adaptive front lights. It felt very safe and competent driving along the almost empty roads of northern Scotland around John O’Groats.

There’s a dizzying array of equipment levels. Buyers have the choice of five specifications – SE, SE Nav, SE-L, SE-L Nav and the flagship Sport Nav. You can choose the latest aids to safety like automatic braking in traffic. Goodies like alloy wheels, air conditioning, colour touch screen, and USB/iPod connectivity are thrown in too. 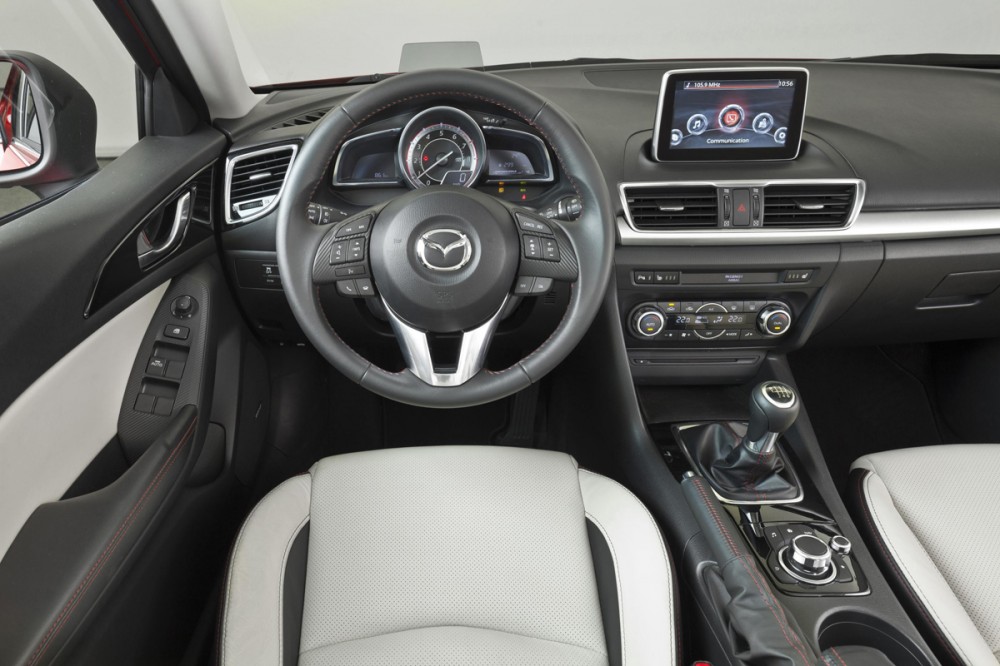 Suppress turbulence
The Mazda3 has shed much weight and the proportion of high-tensile and ultra-high-tensile steels used in the bodyshell has increased from 50 to 60 per cent. Some models sport what’s called an active air shutter which keeps the lower front grille closed whenever possible, as well as underbody covers, tyre deflectors and turbulence-suppressing spoilers, to boost aerodynamic efficiency.

And of course Mazda brags about connectivity, with its cloud-based automotive internet platform, and on-demand internet radio service app. These new internet apps will soon be vying with the steering wheel-mounted paddles for the prize of most unused bits of a car.

Mazda believes that the internal combustion engine will still account for the overwhelming majority of motors in this decade, and that there is still a great deal more to come from petrol and diesels, which it says do as least as well as hybrids for economy, for less money. Mazda is eschewing the path of most manufacturers which are making smaller engines and using turbochargers to force more power out. Mazda says it is better to use bigger engines and make them more efficient. Mazda is offering a hybrid in Japan, but hasn’t said yet whether it will use this abroad.

I’m biased in favour of Mazda having owned two Mazda MX-6s for three years each. Both cars were absolutely rock-solid reliable as well as driving beautifully and looking terrific. A friend of mine ran an old Mazda3 for years which refused to die. But if you have to choose a car in this sector you really are spoiled for choice. You can’t doubt the all-round excellence of the VW Golf, or the Hyundais and Kias. It’s probably best to decide your budget, then go to your nearest dealer and see what comes out ahead. 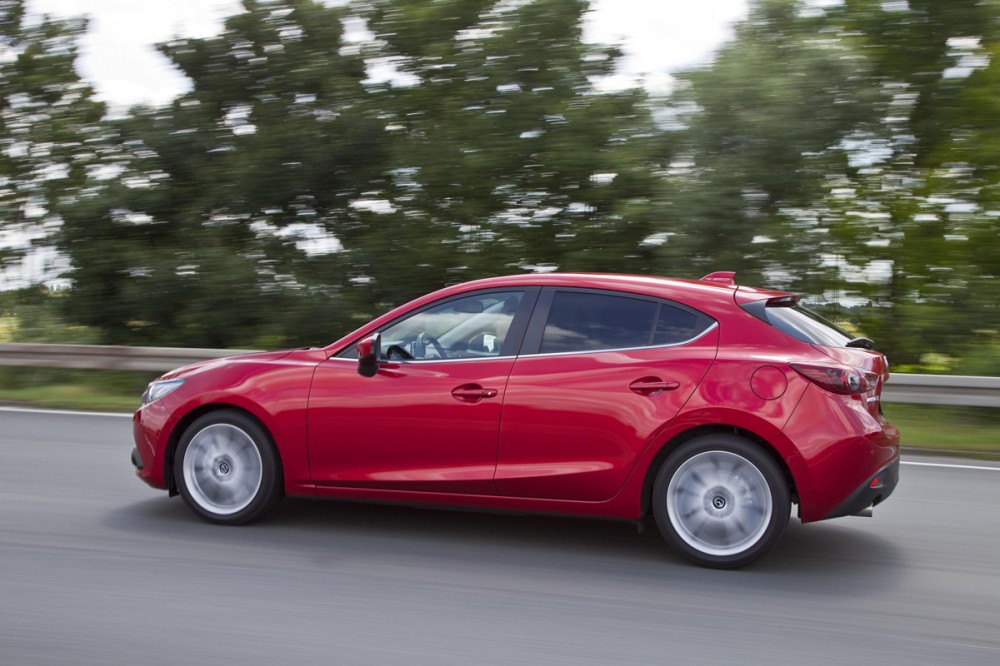