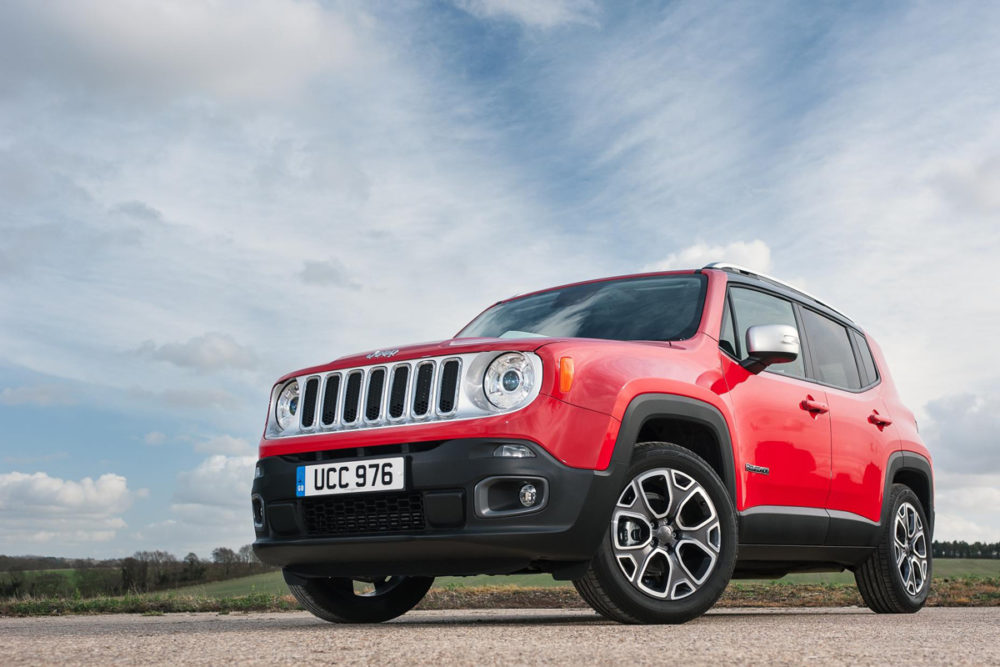 The Jeep Renegade was on my possible purchases list, but I’m sorry to report it failed on a bunch of my (perhaps very personal and subjective) criteria. 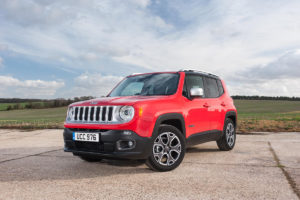 The Renegade was unlucky to have followed on quickly from my week with the Hyundai Tucson, which is in the next category up in the SUV world and is bigger but should be much more expensive than the Jeep. The top of the range and magnificent Tucson came in at close to £32,000, but this range leading Trailhawk bursts through the £30,000 barrier too at £30,395.

The first failure area was quality. Compared with the Hyundai, the interior felt a bit gaudy and cheap, although the over-the-top rugged and gimmicky design is clearly meant to appeal to target buyers. To be fair, some parts of the interior design were impressive. The dials on the dashboard were very attractive and easy to read. (For some reason, there was a delay mechanism on the headlight full-beam switch). The leather steering wheel had a high-quality feel to it, unlike the Hyundai. The little wheel to control the 4×4 system which allows you to select snow, sand, mud rocks and auto, was almost hidden from view, and probably reflects the designer’s assumption that nobody could ever be bothered to tinker with this. 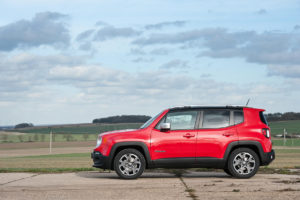 The second negative was carrying capacity. I couldn’t get my mountain bike into the back because the aperture was too small. This also meant that a set of golf clubs could only be accommodated if one of the rear seats was folded down. Just to make a stark comparison. When I failed to load my mountain bike into the Jeep, I chose an alternative vehicle, my little Honda Jazz. The bike fitted in to the Jazz, wheels on, although of course this meant the rear seats were folded flat.

Fuel economy
Where the Renegade scored heavily though was in fuel economy. I managed an average 38.65 mpg compared with the claim of 47.9 mpg. That’s a miss of just under 20 per cent, and in today’s world counts as just about as close to honesty as you’re going to get. On one, motorway-dominated trip, I managed 40.5 mpg. The two litre diesel engine was powerful and the nine-speed gearbox impressive, although it didn’t react well to attempts to manually over-ride it. In town and when idling though the engine was very noisy and rattly, but it became turbine smooth cruising at motorway speeds.

The Renegade marks a series of firsts in Jeep’s history. The Renegade is Jeep’s first entry into the small SUV segment. It is also the first Fiat Chrysler Automobiles (which owns Jeep) car to be jointly developed by Italian and American engineers and the first Jeep to be built in Europe but sold in the USA.

Advanced technology includes the Uconnect touch screen for infotainment with a choice between 5 and 6.5-inch screens. The My Sky option has two lightweight panels that can be easily removed and stowed in the boot for a truly panoramic open-air experience. 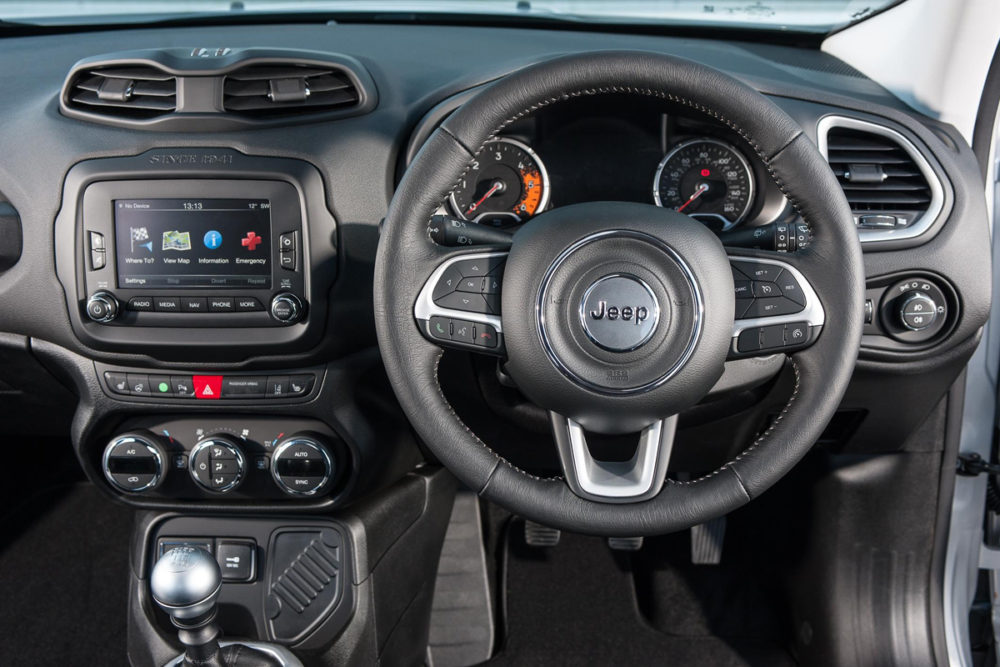 Available with two or four-wheel drive, the Renegade boasts two new, advanced 4×4 systems: Jeep Active Drive and Jeep Active Drive Low. The new 4×4 systems supply the proper amount of torque for any driving situation ensuring enhanced safety even in the slipperiest conditions. Rear axle disconnect seamlessly switches between two and four-wheel-drive to guarantee traction but reduce the energy required and therefore fuel consumption when 4×4 capability isn’t needed. Jeep Active Drive and Active Drive Low are combined with Jeep Selec-Terrain which gives the driver four settings (five on the Trailhawk version) for optimum performance on any surface.

The Trailhawk version tested has the most ability off-road thanks to the Jeep Active Drive Low and Selec-Terrain system with Hill Descent Control and Rock Mode. It has all the luxury equipment from the Limited including leather seats, rear parking sensors, speed limiter, 7” screen, 6 speakers and electric seats. My Trailhawk had things like metallic paint £600, and Visibility Pack – £750 – including Xenon lights, automatic headlight activation and SmartBeam headlights.

The Renegade has unforgettable looks which won’t appeal to all, but you have to admire Jeep’s tenacity in avoiding the bland design of most of its rivals. If I was in the market for a new small to medium SUV (which I am) my current first choice is the Hyundai Tucson, which may well be threatened by the new Kia Sportage when it comes out early next year. 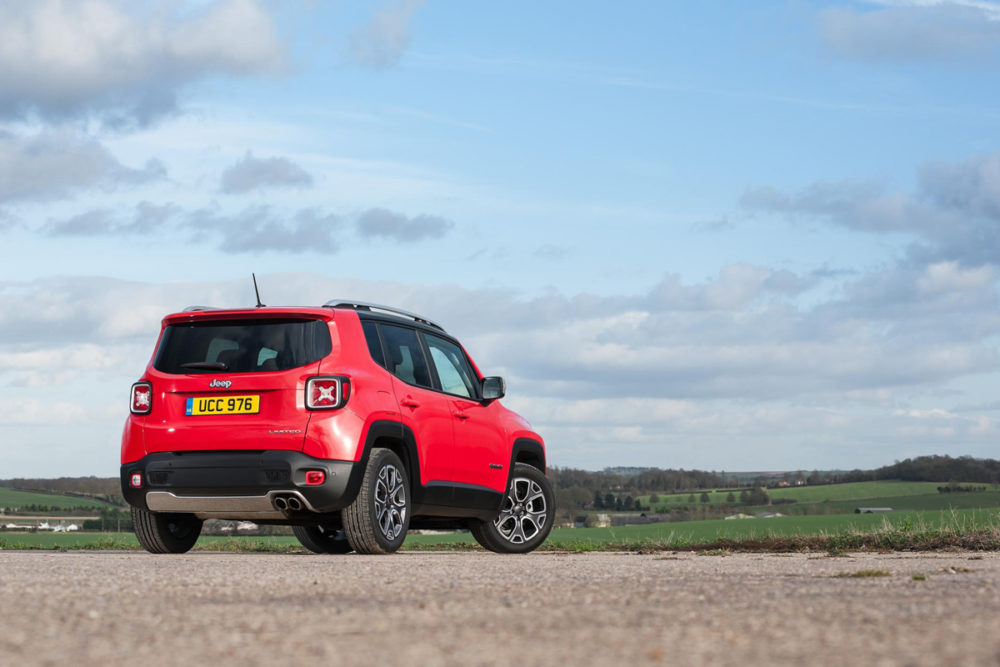