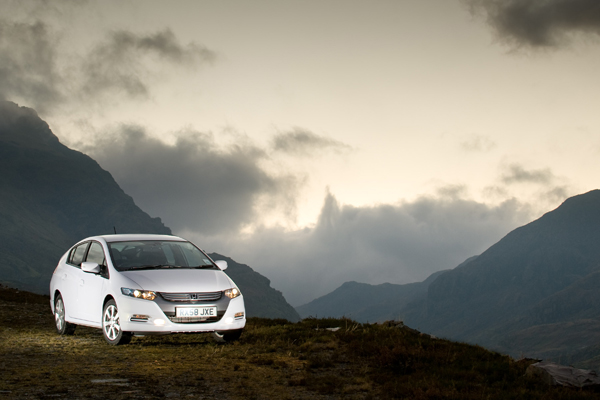 “It remains to be seen whether this fuel economy will be achieved at the expense of fuming motorists held up in the queue for miles behind, or is compatible with driving at a reasonable speed”

I had meant my review of the Honda Insight to be a bit of rant against the Japanese company, which I’ve found to be increasingly irritating in its pious attitude to the environment.

There was its annoying attempt to use its Formula 1 racing car as an exceedingly lame attempt to embrace greenery. Instead of listing the Honda team sponsors on Jenson Button’s car, the company opened a website www.myearthdream.com for people to pledge their commitment to the environment. Their promise to help save the world would be recorded on the car’s livery in the form of a pixel in the design of the so-called Earth livery painted on the car. 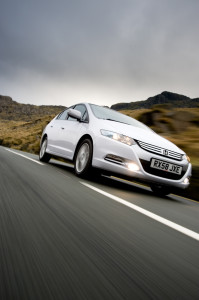 The car had no new environmental technology. It blasted around the circuits of the world pointlessly gulping down vast quantities of expensive fuel and materials and spewing out massive amounts of CO2, just like the others. The only thing green about the car was the colour it was painted; and that was blue. The fact that no sponsors wanted to be associated with this team of losers last season just made the whole exercise more irritating. Honda then dumped the racing team of “no-hopers”, only for it win the next time out!

Then there was a video presentation Honda produced for the launch of the Insight – a hybrid car with two engines, one petrol and one electric. The video told us that there was now big public demand for fuel economy, as though the price of petrol and diesel in Europe hadn’t gone through the roof years ago, forcing us into weeny, fuel-efficient cars.

No proven link
The Insight, with its supposed frugal ways, was a way to do something about climate change. Now don’t get me started, but although the mainstream media and politicians have accepted there is a link between excess CO2 and climate change, as a former Science and Technology Correspondent for Reuters, I can tell you that this link is by no means proven. Politicians are happy to go along with this because it gives them new reasons to order us about. Some businesses see so-called Cap and Trade schemes to cut CO2 use as a way force up its price, and a great way to make huge sums of money at our expense. 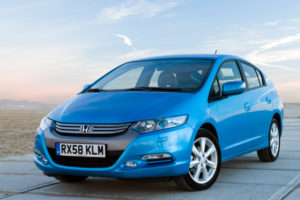 The video also slipped into the annoying practise of interchanging pollution with CO2 and economy. Most pollution from cars was ended 20 years ago by the catalytic convertor. CO2 isn’t a pollutant. It’s one of the atmospheric gases which make life on earth possible. The more of it there is, the better plants will grow. Humans exhale tons of the stuff all the time. Cutting the use of fuel and cutting pollution is not the same thing.

The Insight also includes a gimmicky device which uses a dial which turns green to help you improve your motoring economy, as if you wouldn’t know in the first place that by driving with care and restraint, you would squeeze out more miles to the gallon.

Diesels do it better
Then Honda made a big deal about the improved hybrid in its Insight car, a system inherited from the slightly bigger Civic. Why bother to invest all this money in hybrid technology, when you could do it better and cheaper by developing a small diesel engine? Diesels provide just as good economy and better performance with only one engine, so it’s lighter, and cheaper.

Why bother with a variation on the hybrid, when shortly the marketplace will be transformed by plug-in hybrids which will make current hybrids obsolete? (Plug-in hybrids use newly developed large capacity lithium ion batteries to allow a much improved range of up to 50 miles just on electricity. They can be recharged overnight by plugging them into your house, or the range can be extended by a small engine in the car charging the battery. The first plug-in hybrid is expected in late 2010). 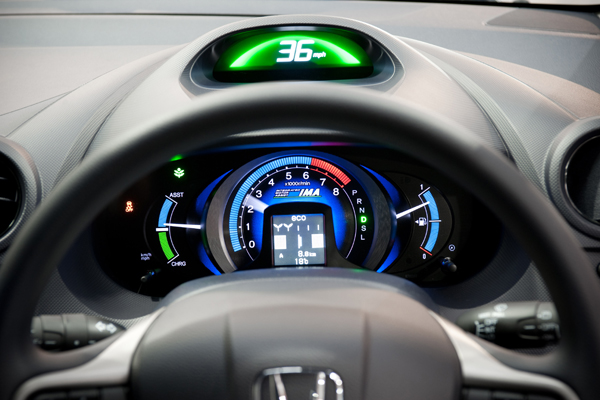 To my surprise, Honda took on the small diesel argument in its presentation of the Insight, and then blew the cover off the E.U. rules which allow the car manufacturers to use bogus methodology to persuade us that fuel economy is much more than it really is. My rant suddenly becomes a tribute.

NOx, particulates
Honda prefers hybrids to diesels because oil burners spew out more poisonous NOx and particulate emissions. Diesel’s advantages are diminishing, as the price at the pump accelerates past petrol. Fair enough. But Honda also says the technology it has used to improve the fuel economy of the Insight means that it can live with the claim of an average 64.2 mpg-4.4 litres per 100 kilometres for the SE model and 61.4 mpg-4.6 litres for the ES. Bear in mind that the Toyota Prius, which Honda is aiming the Insight fairly and squarely at – claims, using the E.U method, to return about 65 mpg, but in fact only does about 42 mpg in the real world.

When you turn on the ECON switch in the Insight, the engine is designed to smarten itself up by –

·      Limiting power and torque by 4 per cent, except when the accelerator is floored.

·      The throttle control maximises economy by refusing to accept a command which exceeds economy mode, accept when the accelerator is floored.

·      The Stop-Start system turns off the air conditioning

Honda said the E.U. economy test takes place over a totally flat route of 11 kilometres consisting of two modes – 2.5 miles of maximum 31 mph-50 km/h, and 4.3 miles of maximum 75 mph-120 km/h – some accelerating, some cruising, some idling, no air con, wipers, lights, audio or Sat Nav. This will produce data which is perfectly comparable, but of absolutely no use at all. 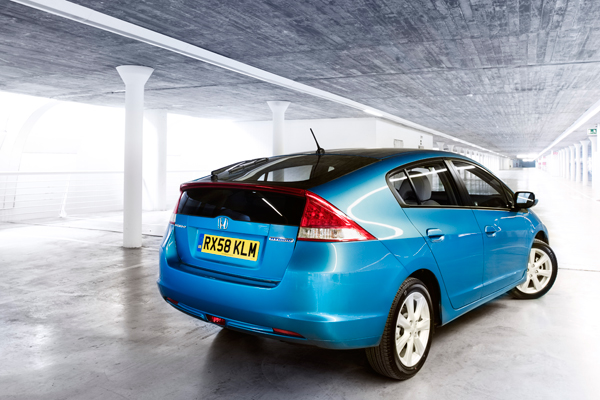 Thanks to Honda for letting us know that. I can’t wait to test the Insight in the real world myself, after driving it for an hour or two at the launch.

The new Insight has five-doors and room for five. Its styling resembles the futuristic-looking fuel-cell-powered FCX Clarity concept car.

“The Insight will be significantly lower in price to any other hybrid on the market, making petrol-electric technology accessible to more people,” Honda said.

“Mild” versus “strong”, and it’s not cheddar
The Insight uses a “mild” hybrid system to enhance the 1.3 litre petrol engine, as used in the Civic. “Strong” hybrids used by the Prius allow a limited amount of separate, battery-only powered driving.

The Insight, and hybrids like the Prius, offer big cost savings, with load road tax (£15), lower company car tax, and no London congestion charge. The latter could save up to £2,000 for London commuters.

It drives nicely. When you get into the Insight, you will be impressed by the futuristic looking dials and dashboard, with prominence given to the economy driving instructions. The screen will turn green if you perform well. There’s not much head-room in the back. The interior is practical, almost frugal, which should please the sandal-wearers who will be buying the car. They’ll also love the moment when the computer score sheet monitoring driving behaviour on the dash awards them five green trees for maximum economy. 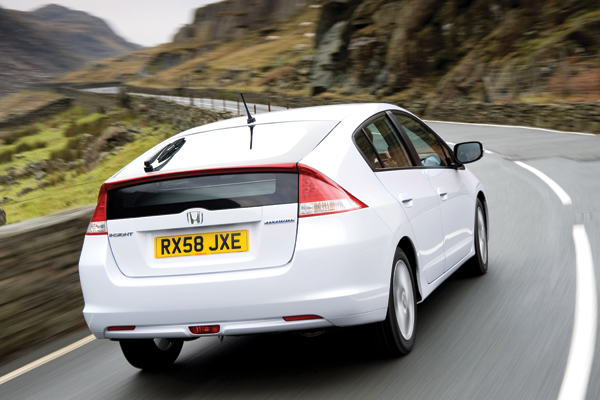 It remains to be seen whether this will be achieved at the expense of fuming motorists held up in the queue for miles behind, or is compatible with driving at a reasonable speed. 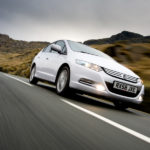 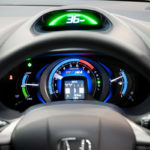 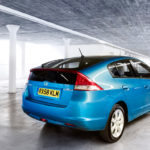 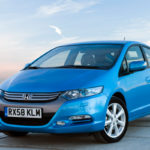 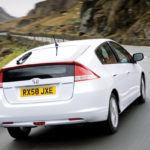 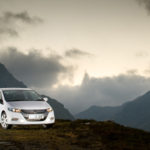