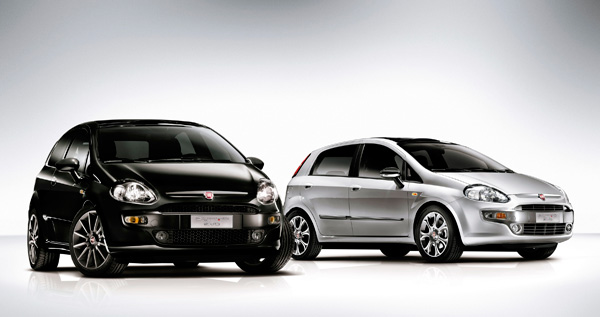 Prices Look Steep; Surely Not Racked Up For “Scrappage” Purposes?
Fiat has face-lifted its Grande Punto range by sharpening up the looks front and back, adding more quality to the interiors, and improving its engines with MultiJet II diesels and petrol engines enhanced by its new MultiAir technology.

Fiat has also strengthened the Punto’s attraction by adding an impressive amount of kit you would have associated with bigger, more expensive cars.

One thing the previous Grande Punto didn’t lack was good looks, and the luckily the face-lift hasn’t really done any damage to the simple, handsome, flowing lines of the previous model. There’s a new front bumper and radiator grille, while at the rear the new bumper style incorporates the number plate and the centrally placed Fiat logo that doubles as a boot release.

Now called the Punto Evo, the new car range offers “Blue&Me” technology with touch-screen navigation, mobile phone, trip computer and MP3 player with steering wheel commands. The sat-nav system is the Tom Tom portable and there’s a special port on the dashboard where you plug the device in without the aggravation of wires. SEAT first came up with this idea last year.

The interiors are certainly a big improvement with classy materials and attractive instruments. The seats look better too. 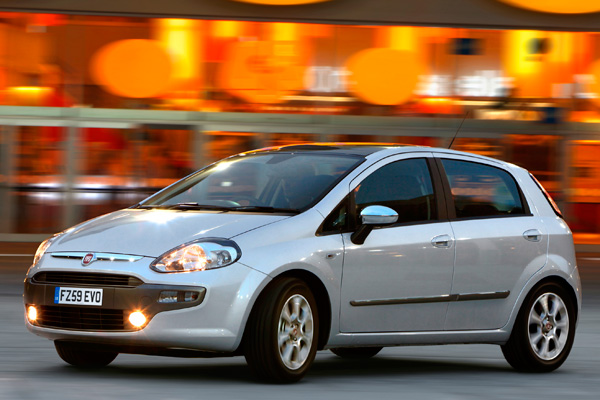 MultiAir technology
Fiat is making a big deal about the engine enhancements available on the Punto Evo. MultiAir technology raises the power of petrol engines by about 10 per cent and increases fuel efficiency by between 10 and 25 per cent. The technology improves the flow of air in the engine’s combustion process. MultiAir handles the electro-hydraulic system of engine valves for dynamic and direct control of air and combustion, cylinder by cylinder and stroke by stroke.

“Thanks to direct control of the air through the intake engine valves without using the throttle, MultiAir helps to reduce fuel consumption. Pollutant emissions are likewise reduced through combustion control,” Fiat said.

Fiat, which first presented the technology at the Geneva Car Show in March 2009, has an impressive track record in engine innovation. It developed “common rail”, diesel engines in the 1990s, (known as the MultiJet at Fiat from 2003) which use high-pressure fuel delivery to dramatically raise the power of small diesels, provide more power at lower engine revolutions for smooth, peppy, quiet and economical performance.

The first cars to be powered by MultiAir engines will be this new Punto Evo, and the Alfa Romeo MiTo sports coupe. (Fiat owns the Alfa Romeo, Lancia, Ferrari and Maserati brands, not to mention its 20 per cent stake in Chrysler of the U.S. Chrysler’s petrol engines will also get the MultiAir treatment).

More power and torque
Fiat said that the Punto Evo with a 1.4 litre, 4-cylinder 135 hp gasoline engine will produce 12 per cent more power, 13 per cent more torque, consume 17 per cent less fuel, go five per cent faster, and cut the sprint from a standstill to 60 mph by 0.4 of a second.

I won’t bore you with an explanation of how the MultiJet II differs from the previous incarnation. Fiat says it is better in every way. The truth of the pudding will no doubt be in the eating.

Standard equipment now includes front electric windows and a “Blue&Me” sound system. Available across the range, apart from the base Active model, are rain sensitive wipers, rear parking sensors, hill holder, sat-nav, start-stop, adaptive foglights, lane change warning, and “follow-me home” lights. There’s an “eco” drive system which will tell you when to change gear, and it will also rate your skills as a green driver. Just what you want; a car that’s a critic too.

Harsh suspension
The Punto Evo drove sharply, as you’d expect from a Fiat. The suspension was on the harsh side

Prices look a bit steep. When I first saw the price list – starting at £10,995 – I thought it must have been confused with the bigger, Golf-sized Bravo range. Surely, this can’t mean that Fiat is taking the scrapping incentive out of the equation by raising its prices by the government incentive amount, then allowing the subsidy to bring prices down to their proper level? No, that’s surely too cynical. What is true though is that the strength of the euro, mitigated a bit of late, is putting upward pressure on the big European car makers’ prices in Britain.

If you’re in the market for a car in this category, a visit to a Korean showroom is a must. Kia and Hyundai’s prices are as keen as anybodies and their guaranties unmatched. 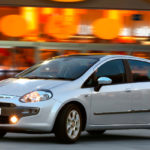 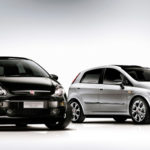