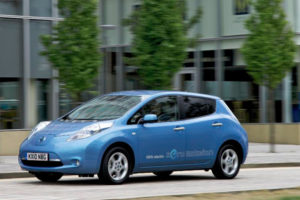 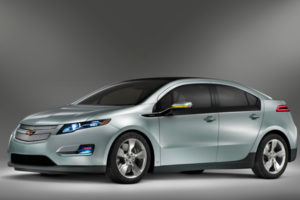 Volt Versus Leaf; No-Contest, But Time Will Tell

“Wouldn’t it make more sense for battery-only vehicles to be much less ambitious – cheap and cheerful little golf-cart like vehicles used for a quick jaunt down to the shops?”

“surprising thing is that battery-only projects survived after the Volt, and improved plug-in hybrids appeared

I wonder how many days it will take in 2011 for a new Chevrolet Volt, with its 300 miles plus of range thanks to a battery backed up by a gasoline motor, to drive past a Nissan Leaf – range indeterminate but said to be 100 miles on a good day – stranded by the side of the road with a flat battery.

Let’s hope Volt buyers are generous types who will sympathise with the afflictions of the less fortunate, even though it might be hard not to say I told you so.

After all, despite a $6.6 billion investment programme, the battery-powered Leaf is almost guaranteed to occasionally conk out miles from its destination. Range is seriously undermined by extreme weather, hot or cold. If a Leaf is carrying a full load of passengers, that will curb the amount of miles available. If Leaf drivers venture on to the highway and start doing speeds close to the maximum allowed, the range will dip alarmingly. Perhaps the most surprising thing about battery-only projects is that they survived at all when it became clear that extended range electric vehicles like the Volt, and improved plug-in hybrids, were going to be available at the same time. It’s not as though vehicles like the Leaf have much of a price advantage. Wouldn’t it make more sense for battery-only vehicles to be much less ambitious – cheap and cheerful little golf-cart like vehicles used for a quick jaunt down to the shops?

The extended range Volt has a much smaller battery capacity – up to 40 miles we are led to believe – but because of its auxiliary gasoline engine, range is over 300 miles, and of course it can easily be refuelled in a couple of minutes at a gas station. A dead Leaf will take maybe eight hours to fully recharge, although a short, sharp charge will take considerably less time.

These huge drawbacks haven’t stopped European motoring journalists voting the Leaf Car of the Year for 2011, despite the fact that the over-riding reason for the award was down to its unproven battery technology. This would seem to be a huge hostage to fortune. And its high price (even with the $6,600 government subsidy in Britain) will scare away regular buyers who want value for money and flexibility when they buy a car. In the U.S., some motoring writers have nominated the Volt as Car of the Year, and although its specification promises much more than the Leaf, the car still has much to prove. Will its battery range get consistently close to the claim of 40 odd miles? Can it really perform long term as promised, belting down the highway with power from the gasoline engine generating enough electricity for the purpose? How long will the batteries last?

Maybe by this time next year the Leaf and the Volt will have proved themselves valuable vehicles which will command car buyer’s respect. I haven’t driven the Volt yet, but my money reckons it is more likely to be in a winning position 12 months from now. I have a vision of the Leaf and other battery-only cars either stranding their owners miles from home, or subjecting them to teeth-grinding humiliation as they creep back to base at 15 miles an hour being overtaken by fist-waving truckers and contemptuous cyclists. We’ll see.