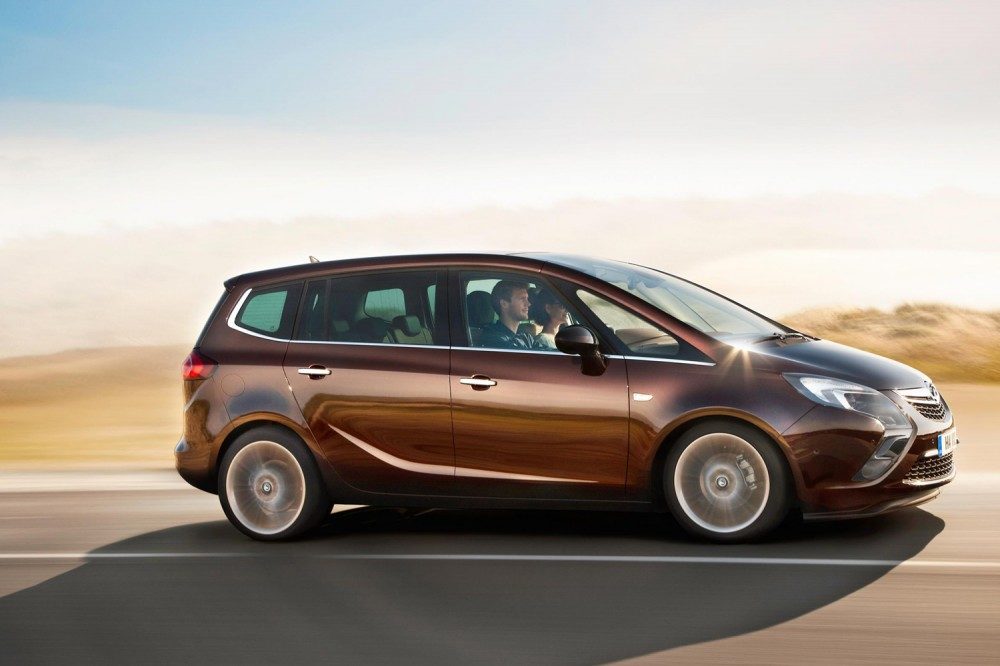 Vauxhall/Opel Pulling Out All The Stops To Survive, Thrive.

For – almost turns practicality into luxury.
Against – pricey.
**** out of 5

VIENNA, Austria – Vauxhall-Opel has facelifted the Zafira MPV and added a new diesel engine which promises much in the way of fuel economy and smooth performance.

The new Zafira also offers a choice of other diesel and petrol engines. The body design includes cues from the more expensive Insignia saloon. The interior has a more premium feel, the new panoramic windscreen and sunroof gives occupants unrivalled visibility and sense of spaciousness. So-called Lounge Seating offers second-row passengers limousine-luxury by eliminating the middle seat and folding down the third row. The FlexFix bicycle carrier holds up to four bikes. 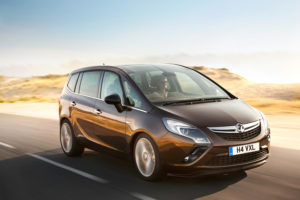 But it’s the new 1.6 litre diesel engine which Opel-Vauxhall is especially proud of. Vauxhall and its sister company Opel are pulling out all the stops to turn the organisation around. Vauxhall-Opel has lost an eye-watering $18 billion (yes that’s billion) since 1999 and not surprisingly the north American owners General Motors are getting a bit impatient, to say the least.

While some investors implored General Motors to cut their losses and shut down this European value muncher, earlier this year GM CEO Dan Akerson made clear it was standing and fighting. Akerson announced a $5.25 billion investment plan through 2016 for Vauxhall-Opel to develop 23 vehicles and 13 engines, and break even by mid-decade. New models like the cute little Adam, the Mokka small SUV and the ambitious Cascada convertible show the company is pulling out all the stops on the product front. The big Insignia has been face-lifted. And the new 1.6 litre diesel engine driving the face-lifted Zafira MPV is an early sign that Vauxhall-Opel is pointing in the right direction.

Cleanest ever
Vauxhall unveiled the new small diesel and invited a group of journalists to Austria to make sure its bragging didn’t go unnoticed. Vauxhall said the new 1.6 litre diesel engine is its cleanest ever, claiming that its average fuel consumption was a spectacular 68.9 mpg. Car companies in Europe have come under fire recently from environmental groups who accuse them of exaggerating fuel efficiency by up to 30 per cent. But even if Vauxhall is guilty of the maximum deception (European Union rules allow car companies to test their engines on test-beds, minus air conditioning, large people, hills and extreme temperatures all in the name of maximum comparability) that would still be almost 50 mpg. 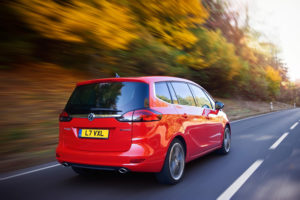 Vauxhall said this new engine, which develops 134 hp and 320 Nm of torque, was part of its plan to renew 80 per cent of its engines. It is the first power train in a new family of cutting edge, four cylinder diesels. The stop-start unit is equipped with catalytic reduction technology that meets strict Euro 6 emissions regulations. This means the engine is as clean as a petrol engine, Vauxhall said.

Benchmark
Vauxhall claims the engine sets the benchmark for performance with its high power output and torque density but also for refinement with low levels of noise, vibration and harshness. It was developed entirely within GM by a global team of power train engineers.

The new engine, its first all aluminum diesel, will also be introduced in other Vauxhall-Opel models. It will be offered in more powerful versions later.

The engine is cleaned up using an exhaust after-treatment in which a harmless diesel exhaust fluid, AdBlue, consisting of urea and water, is injected into the exhaust gas. The solution decomposes into ammonia, which is then stored on a catalyst. Nitrogen oxide enters the catalyst in the exhaust gas, and is then selectively reduced to nitrogen and water.  The technology was developed in-house by General Motors, engineered in Italy, Germany and the United States, and will be used in all of Vauxhall-Opel’s future four-cylinder diesel engines.

Prices for the new Zafira Tourer 1.6 CDTi start from £23,175 for the Tech Line model, and the engine is also available in Exclusiv and SE trim, too. The range now comprises five diesels, including a new high performance 2.0 BiTurbo CDTi engine with 192 hp, and two petrol engines.

“The Zafira Tourer is transformed from a utilitarian people carrier into a flexible limousine that many executive car drivers would feel comfortable living with,” Vauxhall said. 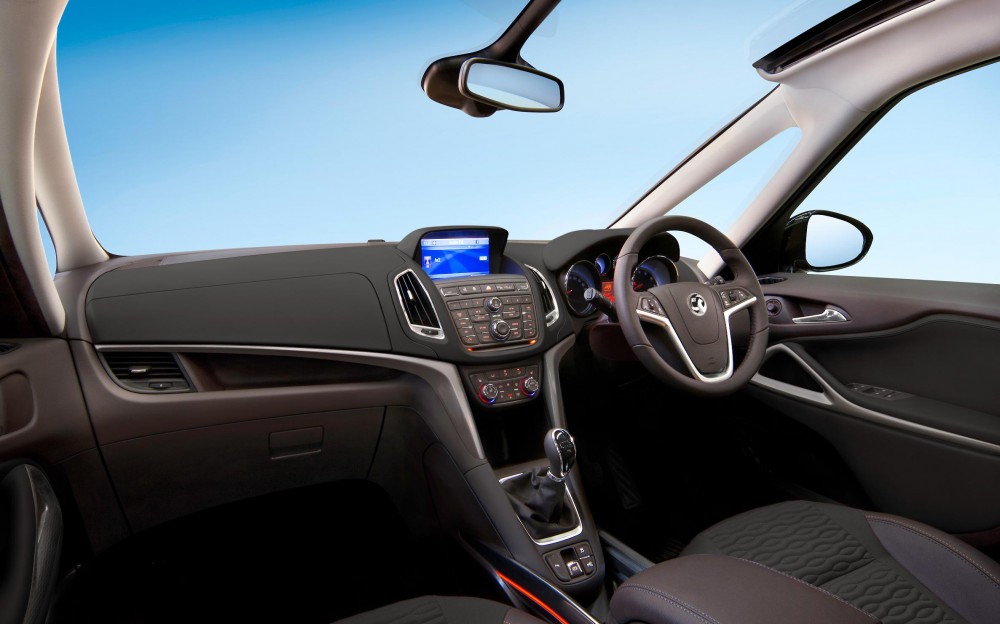 Adding to the Zafira Tourer’s feeling of spaciousness, an optional Panoramic Windscreen and large glass sunroof can be specified. This panoramic windscreen offers generous views, with the top of the windscreen extending back to the front row of seats. The large glass sunroof is also stretches all the way to the rear of the vehicle.

With over 30 storage compartments, the Zafira Tourer is still immensely practical. FlexRail, Vauxhall’s innovative storage system which can also be found in the current Meriva, is available on key models and complements the already generous stowage-cubby count. In total, 710 litres of storage space is available, 65 litres more than the current model, with a maximum storage capacity of 1,860 litres when the three single seats in the second row are folded flat. The new FlexFix system takes two bicycles and can be adapted for two more.

Gizmos
An all-new optional feature in the Zafira Tourer range is Vauxhall’s Front Camera system, which incorporates traffic sign recognition, which identifies key road signs, speed-limit warnings, no overtaking signs and traffic restriction signs. Following Distance Indication helps prevent collisions and encourages drivers to keep a safe distance from the car in front. The car’s central display shows the distance away from the car ahead in seconds. If the driver is in a critical situation where a collision is imminent, the Forward Collision Alert transmits a loud audible and visual warning.

The improved Zafira shows that Vauxhall is pulling out all the stops to survive in a terrible European market which threatens to derail the weakest. Hats off to them for putting their money where their mouths are. 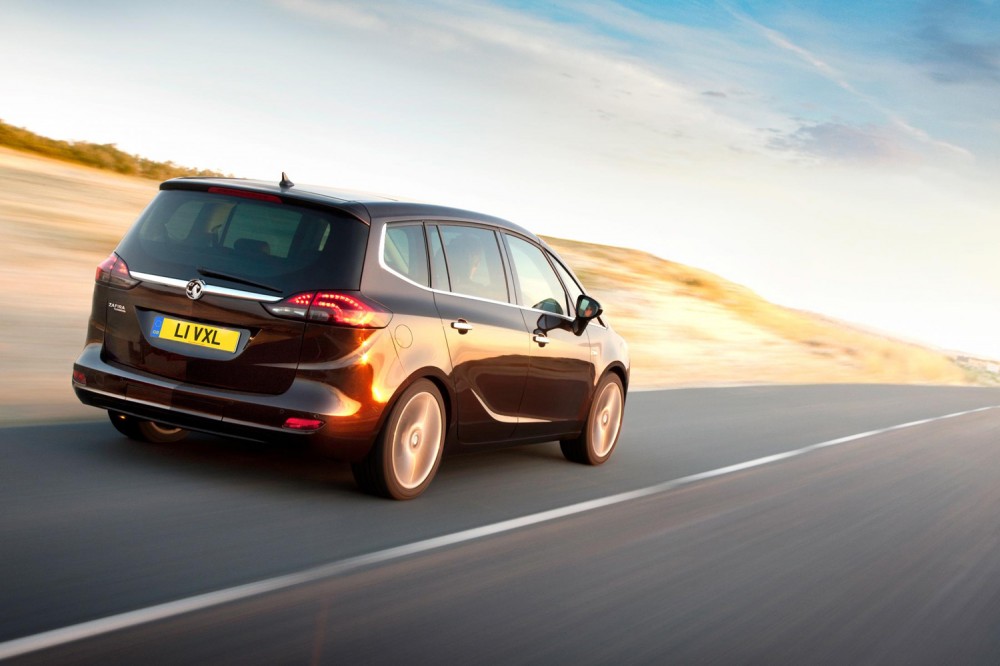