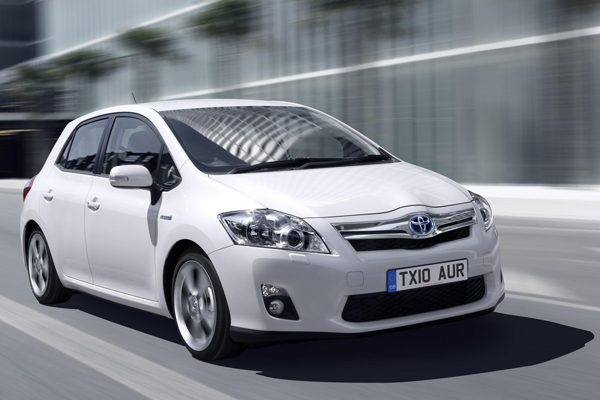 Pity It Can’t Get Close To Headline Economy Claims
Does With Aplomb, Everything Else It Says On The Can
*** out of 5

“I was being ordered off the motorway by this beautiful sounding seductress, but urged on to the straight and narrow by the Dalek-speak of the Google software.”

The Toyota Auris Hybrid is a very impressive car which oozes quality, drives well, but fails to deliver the over-the-top fuel economy claims.

That’s not to say it’s not actually very economical. I managed 44.6 mpg over about 650 miles, and that seems pretty good to me, although I must admit that the driving wasn’t suited to hybrids. I was mainly on motorways to Dover, then again to Paris, with a bit of unwanted, stop-start-park on the dreaded Peripherique, the city of light’s fiendishly busy ring road.

For what it’s worth, I left the car in ECO mode for the whole time. I cruised at close to 80 mph, occasionally drifting close to 90 mph. You know, how normal people drive on motorways. But Toyota claims an average 70.6 mpg and whatever way you look at it, this is not very close to 44.6. The Auris hybrid specification claims the car will do 70.6 mpg average, 70.6 mpg city and 70.6 mpg highway. When I asked Toyota if this was right, it said indeed it was, because of the unique ability of the hybrid power-train. I did drive a short stretch over country roads with a bit of urban driving, and managed 46.9 mpg, and I must admit I switched into Power mode. I wonder what a moderately powerful 2.0 litre diesel engine would return, while probably providing much more exciting performance. I’m hoping to drive a new BMW 520d over similar roads next month, and I’ll be reporting on that.

As you know, I’ve been on the case of manufacturer’s fuel economy claims for years.  A couple of months ago I drove the Honda CR-Z, another hybrid. Honda claims it will manage an average 56.5 mpg. I managed 41.0 mpg in circumstances that you’d expect to provide the greenest return; much poodling along country lanes, a bit of urban driving (where hybrids are supposedly at their best) and little high speed cruising  (very hybrid unfriendly).

WhatGreenCar
What makes this even more maddening is magazines like WhatGreenCar, which awarded the Auris hybrid its er WhatGreenCar of the year award for 2010. You would think that a magazine like this would be championing the consumer and revealing manufacturers’ tricks, rather than cosying up to them and being co-conspirators in this great scam on the car buyer.  In fact, WhatGreenCar mentions the fact in its review of the car that it can’t get close to the figures claimed by Toyota.

“The Auris Hybrid achieves an impressive 74.3 mpg (15in wheels) or 70.6 mpg (17in wheels) on the laboratory combined cycle test. The tested car recorded 38 mpg driving briskly and a best of 60.2mpg when trying for economy.” Then, the magazine carries on as though nothing has happened to torpedo its selection. 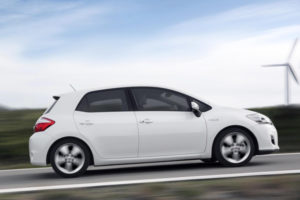 Most of the media simply accept the figures provided by the manufacturers even though we all know how tainted these can be. Don’t forget this European Union testing takes place over flat ground with the air conditioning off and often bears no relationship with real world driving. As WhatGreenCar says, it is a laboratory. It is not a measure of real-world economy. It does provide an accurate comparison across the board, but of data which is useless anyway. It’s very convenient for the industry to have these figures accepted, because it allows tax rates in countries like Britain to be set at lower levels than a more honest reading would.

But back to the Auris. The Auris hybrid is a delightful car, which made my drive to the Paris Car Show very comfortable and secure. The steering was excellent. The seats and accommodation top class. There was plenty of room in the boot, despite the presence below of the battery pack. The CVT automatic gearbox worked well. At motorway cruising speeds the car was quiet, but wasn’t exactly lively when called on to overtake. No surprise, given that it was in Eco mode.

Natty
As in the Toyota Prius hybrid (the powertrain and gearbox is exactly the same), there’s a natty little gear lever which you can push to one side if you want to induce engine breaking as you roll down hill towards a roundabout or junction. It had a start/stop button and remote ignition key, the idea of which I find most irritating and pointless. Usually, when you leave your car, you simply remove the key from the ignition. If you have a remote key, you have probably left it in your pocket or in a shelf or in a cubby in the car. This often induces panic as you leave the car and can’t remember where you put the key. Also, I find it irritating when you approach the car and it apparently unlocks itself. Had I actually locked it? 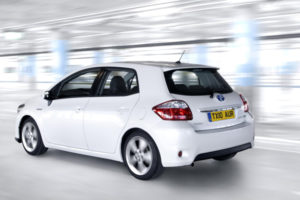 While I’m in irritated mode, the SatNav was clunky and lacked intuition. There was no easy way to put in post codes. When the post code choice was offered, the system wouldn’t respond. I only found directions to my hotel in Paris by using Points of Interest. When trying to put the address in, the system would only allow about half of it. Before you accuse me of being an old fart who is baffled by technology, let me say this. I have Google SatNav on my mobile phone. This is so intuitive, it practically knows where you want go before you turn it on. I used this in parallel with the Auris SatNav, and this guided me to my destination. Another black mark on the Auris SatNav; it puzzlingly and constantly tried to get me off motorways after I was directed away at the start of the Paris motorway at Calais because of road works. I discovered later that there is a command in the system where you have to “allow” the use of toll roads. In other words, the system is set to avoid motorways in France unless you tell it otherwise. Wouldn’t you think a halfway competent programmer would have found a way to at least alert you to this?

Temptress
The Auris SatNav is programmed with a lady speaking the most perfectly-accented French. The Google one has someone speaking awful, computer-speak monotone American French. So I was being ordered off the motorway by this beautiful sounding seductress, but urged on to the straight and narrow by the Dalek-speak of the Google software. Hand on heart, I ignored the temptress.

The Auris is at best a gawky looking car. It looks as though the designers were ordered to design a vehicle which looked as plain and unpretentious as possible. Any hint of flash must be eschewed. Mighty Toyota though has since had a rethink about its design policy, as notably Korean companies have been producing cars with rock-solid reliability (or at least a copper-bottomed guarantee which means the same thing) that look tremendously attractive. It’s no longer possible to sell family cars just on their reliability. There must be pizzazz too. This, the Auris singularly lacks. And it’s not cheap either. 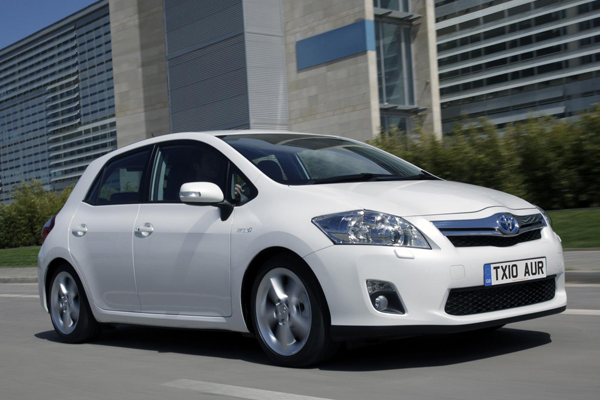 The Auris has a 1.8 litre, 98 bhp four-cylinder petrol engine, coupled with an 80 bhp electric motor. It lollops to 62 mph from rest in 11.4 seconds and will do 112 mph if asked. Toyota says this setup produces 93 grammes per kilometre of CO2, which is more less another way of saying 70.6 mpg.

Stop meaningless grammes per kilometre claims
Manufacturers generally now are plastering their advertising with claims about grammes per kilometre. If anyone out there is reading this from the manufacturing side, can I suggest you cease and desist. The general public has no idea what you are talking about when you use this statistic. They do know about miles per gallon though. And they will love the new Toyota guarantee – now 5-years or 100,000 miles

Toyota said the Auris is the first full hybrid vehicle in the Golf, small family car class. Toyota’s “strong” hybrid system allows a little electric only driving of up to 1.2 miles at up to 30 mph. Honda’s “mild” hybrid doesn’t allow any electric only use.

You can’t fail to be impressed with the engineering, but it leaves the sneaking suspicion that it is all to no avail in the fuel consumption stakes. But for Toyota, this is just a step on the way to a greener world, and the next generation of plug-hybrids will surely be able to impress with their economy claims in the real world, and not just the fantasy of the E.U. test. 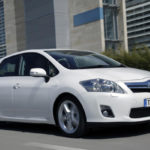 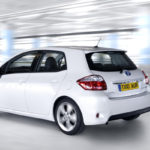 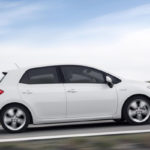 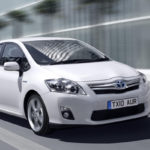