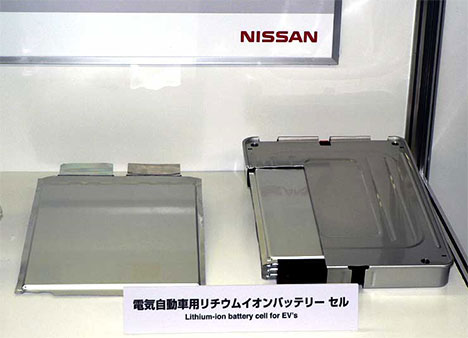 PARIS, France – It’s the neatest idea yet for making sure manufacturers don’t sell too many cars. When the potential customers arrive in the showroom seeking a particular vehicle, you subject them to a rigorous question and answer session to see if they really, honestly seriously need to buy this car. If they don’t quite fulfill the buyer profile you have designed, you send them on their way.

OK, so I have taken a bit too literally what Nissan of Japan says it wants to do when it cranks up sales of its new Leaf battery-only car next year, but it does illustrate the fact that the company is trying to address some serious new problems which don’t happen when selling conventional cars.

In an interview at the Paris Car Show, Nissan Motor Co Ltd Senior Vice President Andy Palmer said the company will make sure potential buyers of the Leaf realize its limitations and that their motoring requirements are suited to a battery-only car. Nissan is also prepared to offer free car hire to help allay one of the drawbacks; long journeys aren’t feasible. This means that when you buy a Leaf you will also get the right to a free week’s car hire a year so the fact that some journeys are beyond the electric one’s ability isn’t a bar to the sale.

Palmer said he is sure that battery costs can be halved by 2020, but maybe doubling range isn’t feasible. The danger of being stranded by a dead battery isn’t that high, but the new Leaf will incorporate many aids to make sure that never happens, including satellite navigation which warns in plenty of time that fuel is low, and where the nearest, open charging point is.

“Our buying process is not trying to say to everybody who walks into a Nissan showroom they should be persuaded to buy a Leaf. Any customer who comes in to buy a Leaf will be taken through a questionnaire. It will ask what is your typical mission? If it’s not the right kind of mission we will guide them away. If you travel a long distance to a work every day we wouldn’t recommend buying a Leaf. If you are living in the suburbs of London – that would make sense.” said Palmer.

Critics say that when battery cars take to the road in ever increasing numbers, the number of disabled cars will burgeon as they unexpectedly run out of juice.

Not so, says Palmer. And just to make sure, if a longer than normal journey is in prospect, Nissan will rent you a normal car, free.

“I don’t think that will be the case. Time will tell. We’ve gone to a lot of effort to make sure the customer won’t get stranded. Most people don’t drive long distances; the average in Britain is 30 miles. On those occasions you want to visit your Aunt Alice in Sunderland (Sunderland is in the north-east of England, about 280 miles from London, where Nissan has a factory) we provide a car hire service. One week a year you can hire for free a Nissan internal combustion engine car to do long distances. We think we have covered the problem where people occasionally want to drive long distances.”

Charging spots
There will be no excuse for running out of electricity.

“Every Leaf will have a satellite navigation system that will show you a map of the area and your available range and will show all the charging spots. You will also be connected to the internet which will send warnings to the driver if they are running low on juice and show where the nearest, free (as in vacant) charging point is.”

“We try to make it as clear as possible that the nominal range of the car is 100 miles. If you are in hot or very cold weather or constantly driving uphill or high speeds, that range will come down to 60 or 70 miles. Uphill though means you will come down at some point so regeneration will help to recover the range.”

The Leaf has so-called “regenerative braking” which puts power back into the battery as the car runs down hill close to free-wheeling. This has nothing to do with the brakes and everything to do with the mass of the car generating energy from the free lunch provided by gravity.

Drivers worried about the range can conserve power.

“There’s an economy button – which gives lesser performance but that will extend the range. If you ignore all the warnings, yes you will run out.”

Governments in France, Britain and Germany are plowing whatever money is left after their austerity programs into infrastructure to boost the attractiveness of battery cars.

“Over time there will be more charging points. Fast chargers – the costs have come down dramatically to about $14,000 – and Starbucks or local gas station can fund these. It takes 25 minutes to fast charge the car. From around 16 minutes if it’s not completely empty. Battery damage? Once a day there is no problem. We wouldn’t advise more than that. If you want to fast charge your battery once a day there will be no detrimental effect on the battery at all.”

Too expensive
Battery cars have been criticized for being too expensive, and not practical enough. Wouldn’t the proposition be transformed if range could be doubled and prices halved?

“It would, wouldn’t it. I think it’s fair to say we will see a dramatic cut in cost over time. A car with an electric motor shouldn’t be any more expensive and could even be less expensive than a normal one. I exclude the battery from that. Obviously at the moment the batteries are very expensive but coming down in cost every day. Can you double the range?  I don’t know the answer to that, (we are) trying all kinds of tricks, we can extend the range; I know for a fact that we can make a battery than can go further.  But can we double it? I’m not sure. Cost? I’m sure. Range I don’t know.”

Why pursue battery-only cars with their inherent lack of range and lack of flexibility?

“We are not dismissing hybrids.”

There are mild hybrids, like the Honda Insight, which use an electric motor to help out the gasoline engine without ever allowing electric-only power. Strong hybrids (Toyota Prius) allow a small amount of electric- only action, and use the gasoline engine to power up the battery as well as drive the car. The latest hybrids – plug-ins – allow up to about 25 miles of battery-only operation and can be recharged at home or in the parking lot. Gasoline or diesel engines boost the battery but also power the vehicle. Extended range electric vehicles use electric power all the time and have a small gasoline engine to supply electricity to the electric motor when the battery runs out.

“We are developing and launching hybrids. Look at our stand. Look at the Infiniti (Nissan’s premium subsidiary) stand and the M hybrid. We have no religion associated with any particular technology. We see them (hybrids) as bridging technology. It’s evolutionary not revolutionary.”

One unexpected advantage, to me at least, for electric cars is their possible interaction with a so-called “smart grid”. This would mean that a car battery could not only be used to drive the car, but it could take in cheap energy overnight, and be used during the day to power your house.  Or you could sell the stored electricity back to the grid using the smart grid.

Upbeat
Nissan and its affiliate Renault of France are famously upbeat about battery cars’ prospects, reckoning that they will account for 10 per cent of the world’s global car sales in 2020. This is typically at least twice as much as the rest of the industry, but most of them are investing across the board in new technologies as they nervously wonder just what will take off.

“The consensus is probably between three and five per cent, so  obviously we are much more bullish,” Palmer said. I couldn’t tell whether he was crossing his fingers at the time.