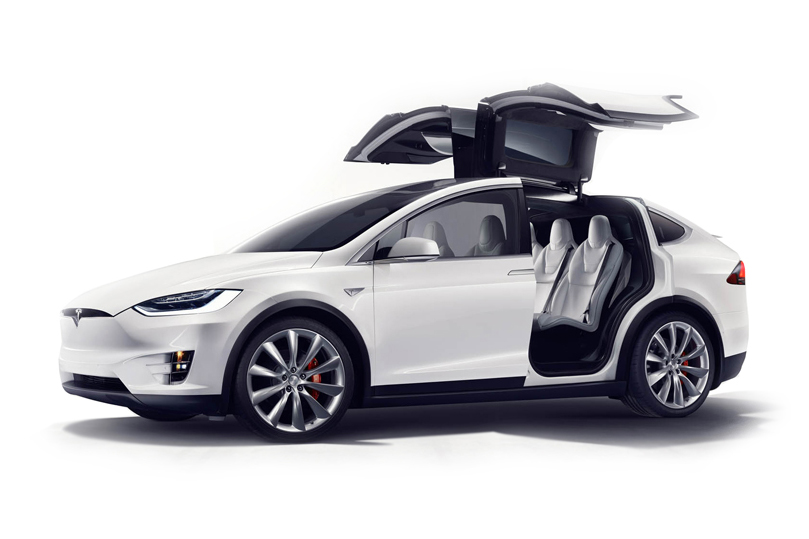 The new Tesla Motors Model X SUV is so packed with headline grabbing features like the “falcon wing” doors, mind-boggling performance and a giant windscreen, that you might forget the fact that it is all electric too.

And it will protect you if biological warfare breaks out.

The Fremont, California-based battery-powered car pioneer led by charismatic entrepreneur Elon Musk has cornered the market for luxury electric vehicles with its current Model S saloon, to the consternation of the German premium manufacturers like Mercedes and BMW. They are fighting back, but promised competitor products which include the Audi e-tron Quattro and Porsche Mission E are still more than two years way. By then Tesla is likely to have its most important car ready for sale, the lower cost Model 3, which is expected to be more of a mass market competitor priced at around $50,000.

The stand-out feature of the Model X is the falcon wing doors, reminiscent of the Mercedes-Benz 300 SL in the 50s and 60s or the notorious DeLorean. The Model X doors though are much more sophisticated. They are double-hinged and open upwards then outwards to allow parking in tight spaces. The giant windscreen stretches up and over the front seat occupants and offers the second row passengers a better view. The performance is more sports-car than SUV with blistering acceleration to 60 mph, and on to 155 mph, in unlimited Germany at least.

Tesla claims superior safety too because unlike regular high-riding SUVs the X is less prone to rolling over because it will be pinned down by the weight of the batteries which are spread under the floor. The big crumple zone will protect passengers too. In conventional SUVs the massive internal combustion engine at the front threatens the occupants in a crash.

The Model X boasts state of the art technology, and then some. The doors open automatically as it detects the driver approaching the car. Each model carries a forward-looking camera, radar and 360 degree sonar sensors enabling advanced autopilot features and bringing the car close to autonomous operation. The current Model S already allows internet driven software changes to take place in the car to download features like Autosteer and Autopark. The 17 inch touch screen integrates media, navigation, communications, cabin control and vehicle data, with some voice activation.

CEO Musk, who has five children, points to the family friendly nature of the Model X, which has three rows of seats, the middle ones are motorised for ease of entry into the back.

The air filter is so powerful it provides air as clean as in an operating theatre, and will keep you safe in a chemical warfare attack, Musk said at the launch of the vehicle. The Model X is about two years late reaching the market. Maybe that’s because the specification was a shade over-ambitious?