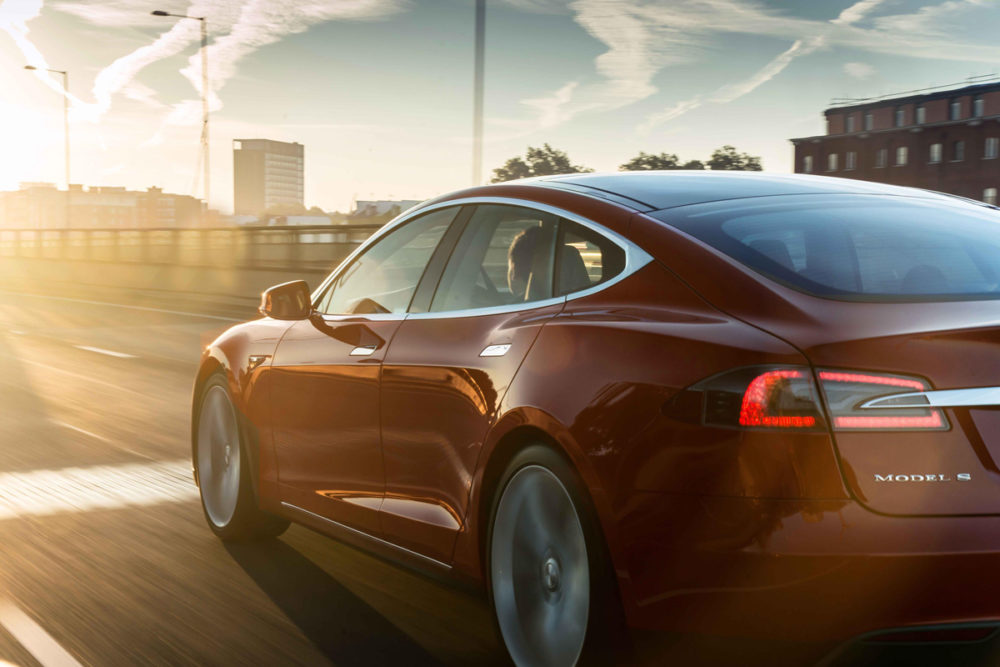 After what feels like years of banging my head against a brick wall, I’ve finally got behind the wheel of a Tesla Model S, the all-electric supercar, which is rewriting the rules of motoring.

And it was worth waiting for. It certainly doesn’t disappoint when you see it on the road for the first time. It is understated if anything, with well-proportioned curves. And it’s big, with four doors. The “coupe” design of the car had made me think it was smaller. It’s a five seater. You can order two rear-facing child seats to go in the boot.

When you get behind the wheel, the first thing you’ll notice is the huge, 17-inch mid-mounted screen, which controls just about everything the car does as well as the sat-nav. The car feels eerie as you set off, with just road noise to remind you that you are driving a car. Get on the highway and put your foot down and “Wow!” Instant, powerful, silent acceleration. 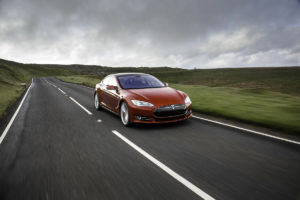 The car is beautifully presented inside, no surprise when you remember prices start at £49,900 for the lesser powered 60kWh version. There are masses of “extras” you can specify, including special luxury packs, sound-systems, semi-autonomous driving and safety add-ons. Tesla has come up with some nifty sounding leasing deals to parry the pain of purchase and making use of the many incentives governments give to encourage battery-only driving. There is also a mind-boggling residual value guarantee. Tesla will pay you 50 per cent of the purchase price after three years, plus 43 per cent of the purchased options.

New-generation electric cars have so far failed to capture the public’s imagination, but the new Tesla Model S is trying to change all that. The car has been winning awards as it seeks to lead the way to an electric future. Leading U.S. car magazine Motor Trend made the Tesla its 2013 Car of the Year. Now it is attacking markets in Europe and Asia.

The low-slung aluminium Model S has fabulous performance, and go-cart-like handling thanks to the massive battery pack, fitted under the floor to push down the centre of gravity. Weight distribution is almost 50/50. There is now a four-wheel drive version too. Just as well because with all that power on rainy days the back will whip out dangerously if you’re not careful. I found the gear selector, situated like a wind-screen wiper stalk, encouraged me to knock the car out of gear and leave me feeling embarrassed as the car ground to a halt. Putting this on the steering column saves space from the usual place between the driver and front seat passenger, and I suppose I would soon get used to it. 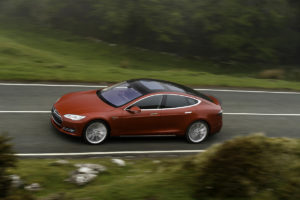 The cheapest 380 hp version has a smaller battery with a 240 mile range. The most expensive one, details below, gets you 312 miles, in theory. My early criticisms that the battery ranges would not come up to scratch have not been borne out, although it would still be interesting to see how much range the car would have bombing down German autobahns and jostling with the Porsches and Mercedes at around a sustained 100 mph.

Without a conventional combustion engine, the designers were able to make the Model S exceptionally sleek and low and it has a world-beating 0.24 coefficient of drag. When you approach the car, the electronic key automatically makes the flush door handles snap out from the body. They retract when you move off, improving aerodynamics, a bit. The electric motor sits behind the rear seats, allowing a flat and roomy interior. There’s even space in the front for an extra boot, which Tesla calls the “Frunk”.

The dashboard is dominated by the big computer screen which controls all the car’s functions. Touch a button on the screen and the all-glass roof slides back. The electric motor spins at up to 16,000 rpm and blasts the rear-wheel drive Performance model from rest to 60 mph in just over four seconds, and on to 130 mph.

Tesla Motors is based in Palo Alto, California, and was founded by Elon Musk, creator of PayPal. Tesla has proven ability in electric car engineering, and sells battery packs and chargers to Daimler. The company is named after Nikola Tesla, a brilliant scientist and a major but unsung player in the development of electrical power. Nikola Tesla worked as an assistant to electric light bulb inventor, the legendary Thomas Edison, in the 1880s. 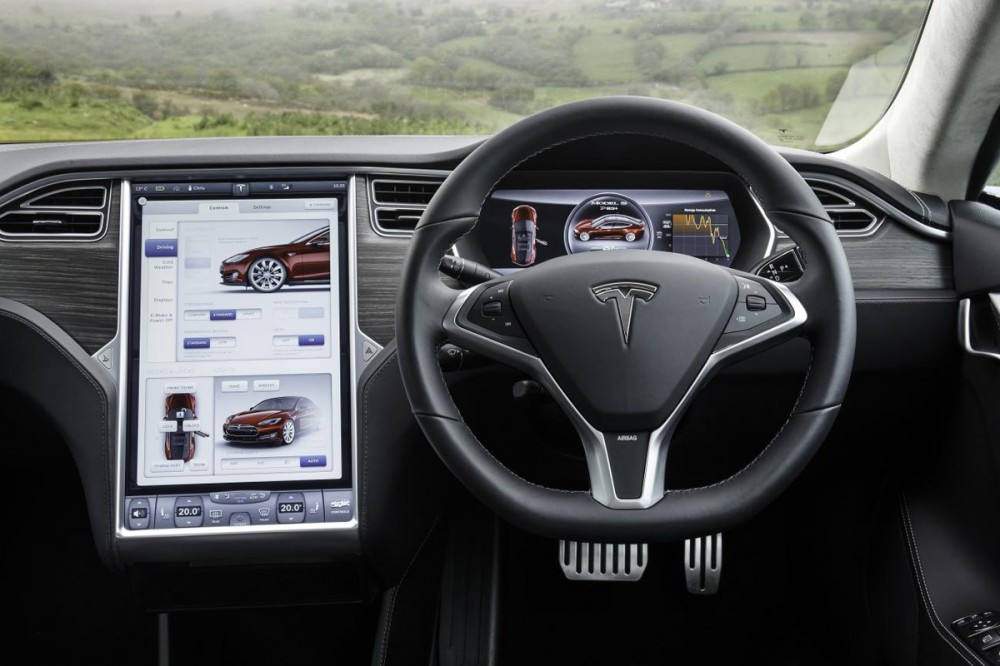 Range question
That one important question about the Tesla remains to be resolved; what will its range be if it is driven like a sports car, using the acceleration and high speed cruising ability? Most of the initial test driving by journalists has been limited to short distances, and CEO Musk has revealed that performance data assumed a speed of only 55 mph, although now the company claims 65 mph. There is also the worry about battery-depletion. As the batteries get older they gradually lose potency. It would be like filling up with the usual amount of diesel, an finding it will go only two-thirds of the usual distance.

The top-of-the-range model is “supercharger-enabled”. That gives you access to Tesla Superchargers designed to replenish over half of a charge in as little as 20 minutes, free of charge. Tesla is building a network of 120 kW Superchargers throughout Europe in Scandinavia and Central Europe, expanding to most of Western Europe by this winter. But aren’t many in Britain – a couple in London, one in Birmingham, and another in Scotland. Tesla is planning to increase that to nine.

But my reservations are trivial compared with the overall competence of this new fangled car. That’s why it gets the coveted WintonsWorld five out of five stars. 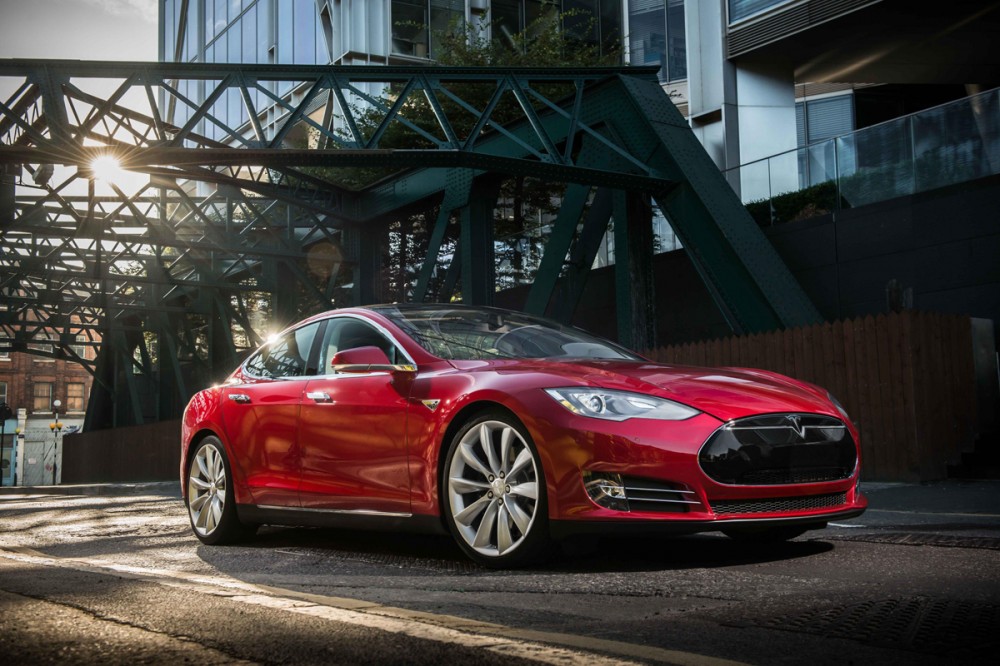