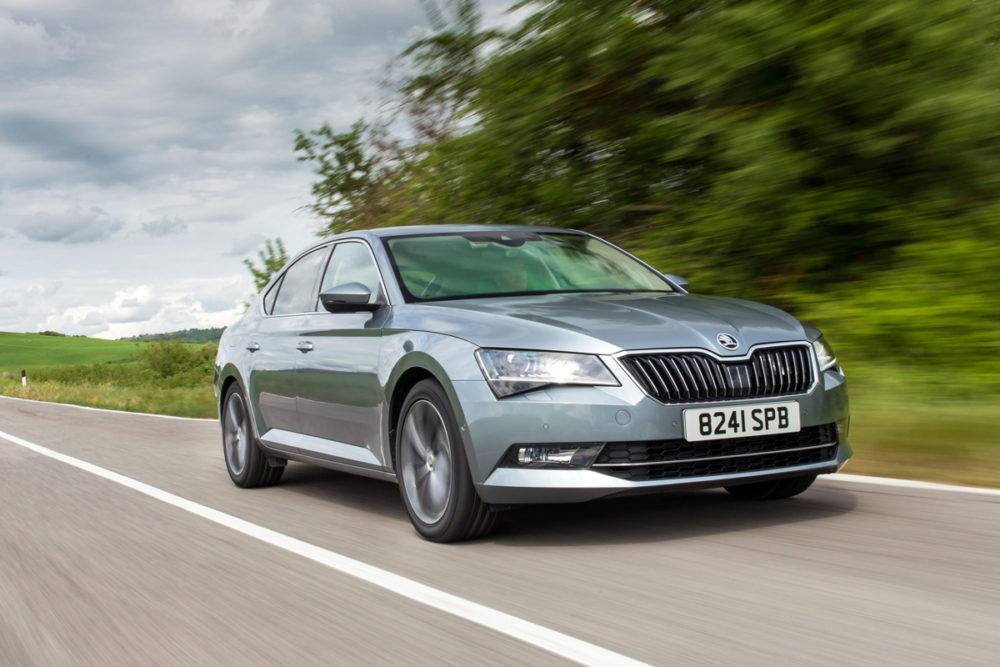 INVERNESS, Scotland – I’ve always thought that calling a Skoda “Superb” was a bit on the hubristic side, not to mention a hostage to fortune, so it’s comforting to discover that the name in Czech, where the company lives, apparently comes from the Latin word “superbus”. Sounds much less pretentious now, doesn’t it? 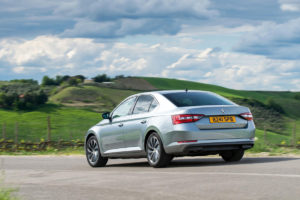 And the new Mark III Skoda Superb is very impressive. So good in fact that it probably causes the VW bosses in Wolfsburg sleepless nights. As you know, Skoda is owned by VW and is built from parts shared across the conglomerate. The Superb is Skoda’s top-of-the-range version of the VW Passat and does more or less the same things for up to £5,000 less.

Prices start at £18,640, for the 1.4 litre TSI S while the cheapest Passat is £22,320. That doesn’t tell the whole story, but unarguably the Skoda will cost less money across the range.

Now of course there will be some who find it impossible to accept that a Skoda is as good as a VW, and won’t acknowledge the fact that the undoubted turkeys and lemons of the communist era have been put firmly back in the box. If you are wavering, try and think of the pre-war Skoda, which was a giant of the engineering world. So not only is the Superb every bit as good as the Passat for less money, it also looks much better. The Superb is exceedingly handsome, in my opinion, while the Passat looks decidedly bland, although on a good day you might say it was understated and handsome.

Czechistan
So on to the new Superb. The wheel base is a bit longer than the old one. There’s more room inside. The boot offers a bit more space.

When it was launched in Prague, Czechistan, last year Skoda was getting very excited.

“The new ŠKODA Superb revolutionises the brand’s design. Generous dimensions, innovative safety assistance systems, a focus on the environment and comfort, plus powerful EU6 engines and ŠKODA-typical ‘Simply Clever’ features have moved the brand’s flagship to the upper end of the automotive mid-class,” Skoda said. 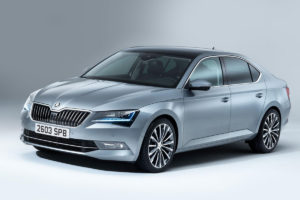 And the new Superb seems to have all the latest safety gizmos and optional extras, just like you’d find on most top-of-the-range saloons. One unique selling point emerged though; instead of one umbrella hidden in the rear left door there is now one umbrella in each of the front doors. The new, electric tailgate can be opened with an optional virtual pedal, where the customer can open the boot by waving a foot under the rear bumper. There’s the latest generation of Park Assist. The car features a rear-view camera for the first time. The traditional handbrake is replaced by an electric parking brake.

Connectivity is all over the place. The Superb can be connected to a smartphone for the first time and selected apps can be operated from the infotainment system’s screen.

Skoda calls features it says are unique to it ‘Simply Clever’, which include a mechanically retractable towing device, a tablet holder in the rear, a tablet storage compartment in the front centre armrest, a USB port and 230 V socket in the rear, cup-holders that allow single-handed opening for 0.5-litre bottles and an extra high-visibility vest storage compartment in all four doors. 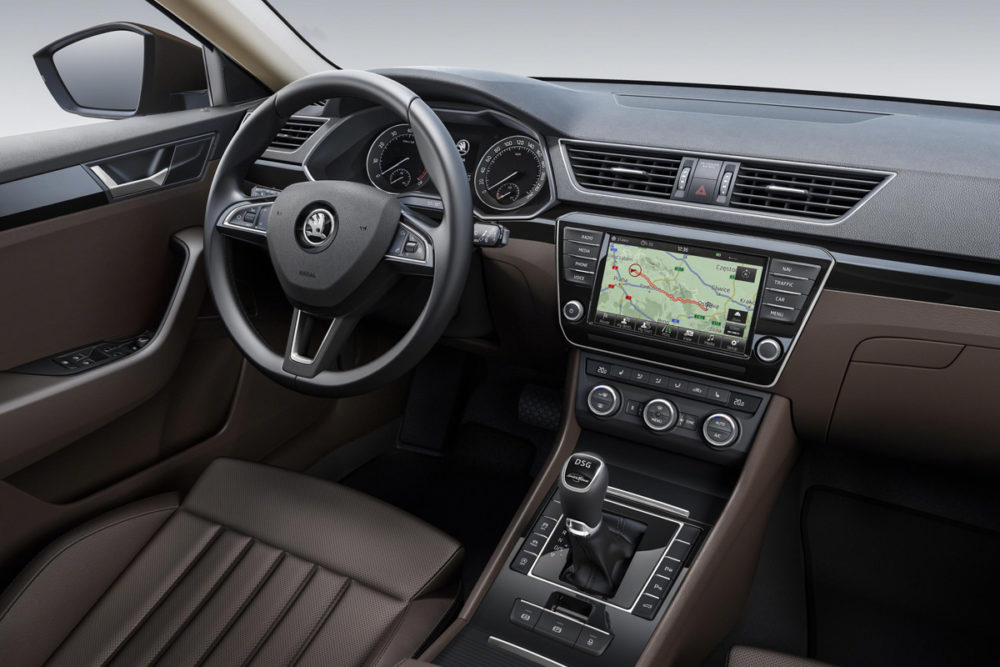 All-wheel drive
The new Superb has new engines offering better fuel consumption. There are five petrol and three diesels, all EU6 compliant and with Stop-Start technology and brake energy recovery as standard. The petrol engines have a power output of between 125 hp and 280 hp, the diesel engines between 120 and 190 hp. Except for the entry-level petrol version, all engines are available with automatic transmissions. Four engines are available with all-wheel drive. There are five trim levels – S, SE, SE Business, SE L Executive and Laurin & Klement.

Driving the new Superb on Scotland’ s highways and mountain roads showed it to be very impressive. The interiors were top class. Ride and handling was impeccable. The automatic gearboxes did a great job. I never did get around to driving a manual. As I drove a VW Passat a week before, I was able to make a decent comparison. I couldn’t really tell the difference between the two. But one is a VW, the other a Skoda. The Skoda costs a whole lot less. That doesn’t sound like a rocket science decision to me. 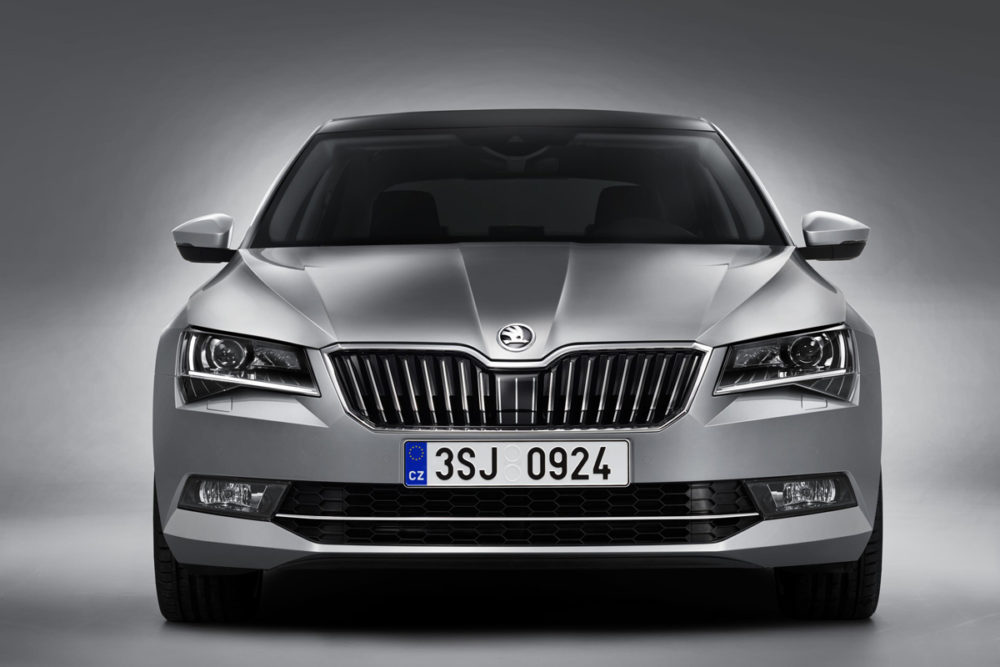