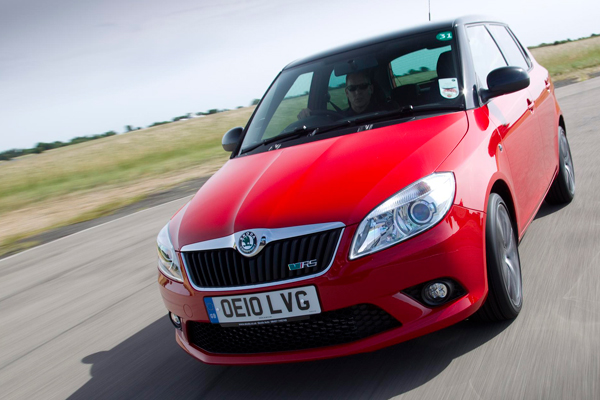 Now You Can Choose An Estate-Car Model Too
Just Who Buys New, Pricey Little Souped Up Runabouts?
*** out of 5

Skoda has souped up its go-faster Fabia range-topper and added an estate car version to the hatchback option.

Skoda, VW’s Czech subsidiary, said (and it’s not saying much come to think of it) that the vRS is the fastest Fabia ever. The vRS is powered by a 1.4 litre TSI 180 bhp petrol engine with a 7-speed DSG automatic transmission. Acceleration from 0-62mph takes 7.3 seconds, with a top speed of 139mph.

I drove it around a race-track, well, a converted old air-field really, and it did go like stink and handled pretty well. The DSG gearbox was really nifty. You can put it into fully automatic mode, or manual Tiptronic. The changes are lightening quick in automatic mode, so anybody engaging manual over-ride will soon lose interest in that.

The vRS has flash 17-inch alloy wheels, LED daylight running lights, and a body kit which will embarrass anybody over the age of 14. There are sports seats, a three-spoke multi-function steering wheel with radio controls and paddles for changing gear, once or twice. 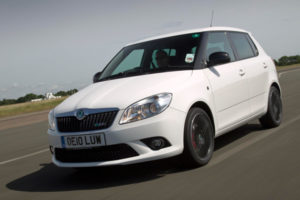 Prices start at £15,700 for the hatch and £16,495 for the estate. When you look at the likely competition – the Renault Clio sport 200, Corsa VXR, Peugeot 207 GTI, Citroen DS3 DSport, Fiesta S1600 – you have to wonder how any new cars like this really will get sold. They all spell immature buyer with too much money and not enough taste. Given that the average age of a car buyer is well into the 50s, that these cars are not cheap, and that anyone who finds this kind of car attractive is likely to be in an age group that would find insurance almost impossible to get, the whole proposition is hard to fathom.

That’s not to say that this little car isn’t impressive. The four-cylinder engine churns out an amazing 180bhp, using a compressor-and-turbo combination. Skoda claims fuel consumption of 44.1 mpg. Both versions boast a newly designed front bumper and integrated fog lamps with integrated LED lights that can be fitted with cornering lights as an option. There are red brake calipers, tinted windows, a new rear bumper with a diffuser and dual exhaust. Depending on the colour of the body, the roof, roof spoiler and wheels for the Fabia vRS hatchback will be available in a choice of black, white or silver. The 14 year olds will be ecstatic. 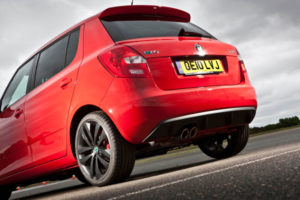 To enhance the driving experience, the new XDS electronic differential improves the car’s cornering ability. It brakes the inside front wheel electronically to increase the torque on the outside front wheel. Accelerating through corners, the resulting torque gives the vRS impressive agility. A tyre pressure monitor and uphill start assistant are standard.

When you stop having “fun” (driving like an idiot) and have to make the car do some useful things, the hatchback offers 300 litres of boot space and the estate car 480. Fold down the rear seats and you get 1,460 litres (1,163 in the hatch).

The next time someone draws up alongside me at the traffic lights in a hot-hatch, I’ll try and engage them in a quick conversation, before they blast off, burning rubber and frightening the children and animals. Just who are those guys?

(Skoda provided one night in an hotel) 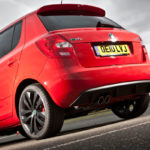 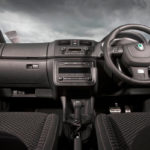 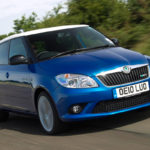 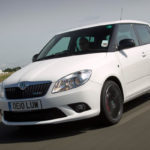 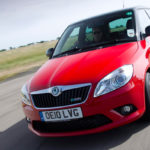