My home charger never managed more than 114 miles and averaged 111.1. Because of its emasculated range, it clearly won’t last long cruising at normal speeds on the motorway but for what it’s worth, it scored 72.1%. In other words, if the range offered is 100 miles it will manage about 72 miles in the fast lane and given that anyone sensible will start looking for somewhere to charge with 50 miles left, this is really an expensive town car. But not that expensive when you compare it with the little Honda e at around £30,000, which has even less range and is much smaller than the Mazda. And compared with the opposition of other very expensive electric town cars it isn’t really an outlier, but just reminds us that so far in the electric car revolution, prices are more than twice as high as they should be for normal utility. Blessed day
Entry level internal combustion engine vehicles cost less than £10,000 and a little diesel would get you 400 miles non-stop, no sweat, in the fast lane, so the revolution has a long way to go before the blessed day when electric car range is competitive with internal combustion engine (ICE) cars, and the refueling experience is as relaxed and takes two minutes.

I once owned a Mazda MX-6 for 3 years and loved it so much I repeated the performance. So, when my MX-30 arrived I was easily won over. The interior was delightful, although the hinged-at-the-back rear doors took me by surprise. I don’t see the point, although when you slam them shut it does underline the massive strength of the body construction. I did squeeze into the back and it was a bit cramped.

On the road, the MX-30 drove beautifully with sharp steering and a cushioning ride. The body held reassuringly-level through sweeping bends. The acceleration wasn’t as scintillating as some electric cars in this class, but was definitely adequate, particularly on the highway. And did I detect the hint of a growl from the electric motor when pressing on? 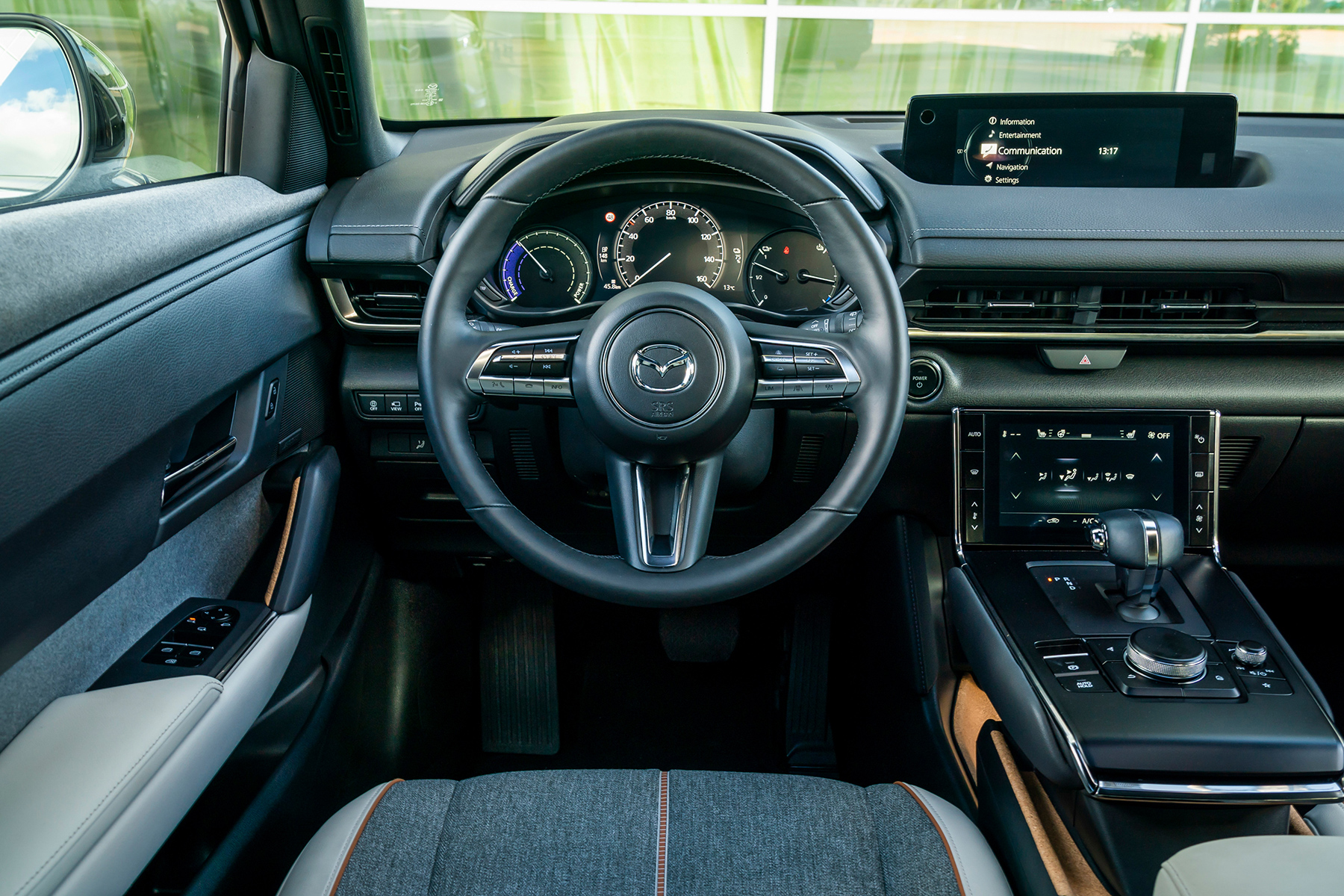 Head Up Display standard
One thing I didn’t like. The automatic drive selector went R, N, D, with Park to the right of R for reverse. Usually P is at the top, and I often made the error of thinking I’d selected P when it was actually in R. Maybe I’d get used to that. The SatNav was clunky, with the annoying dial-a-digit way of entering new addresses. The Head Up Display (HUD) was standard and that was fabulous. HUD is still mainly a premium car feature. It displays virtual vital data – current speed limit, current speed, satnav instructions – at a spot in your eye-line above the bonnet so you don’t have to look down to be aware of them. Terrific and a pressure-lifting safety aid, I think.

The regenerative braking system was very efficient, and somehow a standard hilly drive of 17 miles which usually takes at least 25 miles from an electric car’s range availability only took er 17. The return journey only used 11 miles from availability. Magic or what? You increase the bite of the regenerative braking by engaging a flipper behind the steering wheel and doing it again on long downhill runs. What to buy?
My favourite electric cars so far are two Kias, the eNiro and eSoul. They both had vastly superior batteries to the Mazda but couldn’t compete on the driveability and looks front. But the Mazda’s battery is so inadequate it can’t make a serious case for your hard earned. I scored it higher than the Honda e though because it is so much more car for the money.

After driving many of the latest all-electric cars, there is still not one I can recommend, unless you seriously have no worries about paying through the nose and have a 2nd car for the holiday run.

My electrified choice is a plug-in hybrid, the Suzuki Across I recently drove with its 50-mile battery range and ICE backup for 400 miles plus. That’s pricey but retains the long-range ability most of us will require.

I’m expecting the electric car market to change radically soon, with some serious entry level stuff like a version of the little Hong Guang Mini. This will cost less than £10,000 and have a limited but highly practical 120 miles range, 60 mph top speed, shopping, commuting, school run, golf course and back. It will make so much sense, government inducements will not be required. Then the electric revolution will begin. *(of availability at indicated 130 km/h cruising)