MPV With Masses Of Ways To Store Kids, Stuff 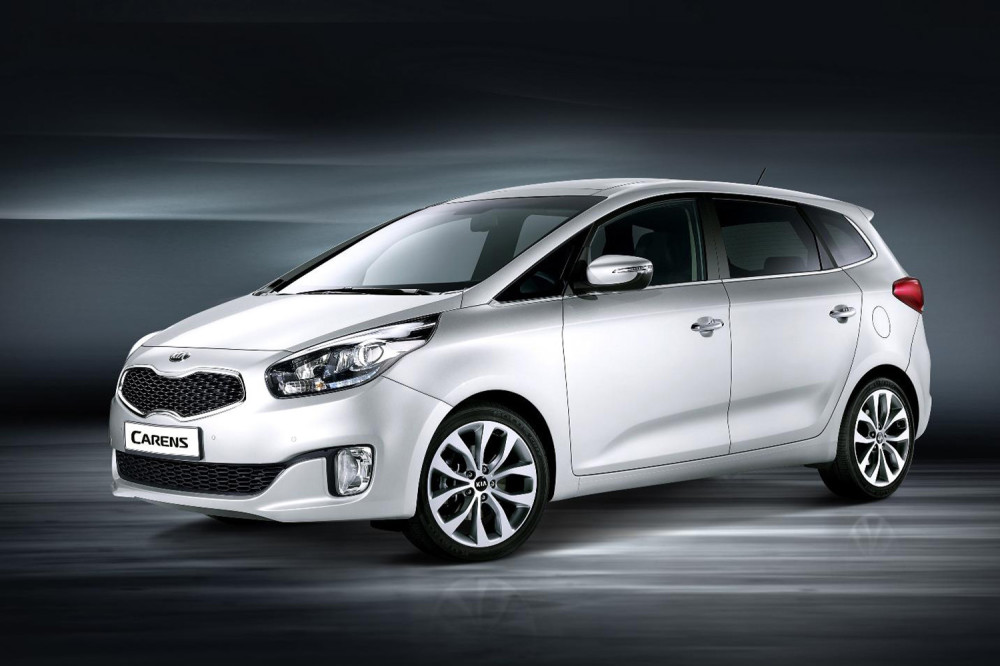 For – utilitarian all rounder that’s nice to look at
Against – it’s not exciting, but who cares?
rating **** out of 5

Let’s face it. For most of us, the choice of what car to buy always boils down to price and utility.

You can forget performance, looks, and handling. Bare-face budget realities will almost always weed out the inappropriate and hand you a stark choice from one or two cars. If you have a young family it will narrow down to what kind of MPV will it be. Kia’s new compact MPV will be a strong contender.

It looks nice within the narrow range of possibilities for a practical and down to earth motor. It has terrific packaging and design. Seven seats are standard throughout the range, and if all else fails, there’s the trump card seven-year, 100,000 mile transferable guaranty.

And it drives pretty well with much comfort and quietness. 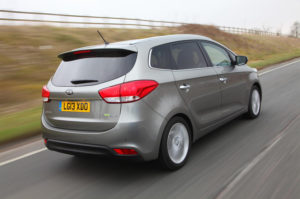 This is the third-generation Carens and this iteration has come a long way from the ungainly predecessors. Kia has also decided to dump the bigger Sedona MPV. There are three engine choices, two transmissions and three trim and equipment packages. The new Carens is 20 mm shorter, 15 mm narrower and 45mm lower than the model it replaces. Yet thanks to a 50 mm increase in wheelbase and lower seat positions it more than matches them for space, with abundant head, leg and shoulder room in all three rows of seats, while delivering the additional benefits of increased luggage space and a lower loading lip.

There are now three individual sliding and reclining centre-row seats in place of a split bench and two separate seats in the rear, all of which fold flat to ensure the ultimate in passenger-to-cargo versatility. A longer, wider and taller luggage area and an under-floor compartment to store the cargo screen adds to the practicality of the new Carens. The front passenger’s seat also fold flat to allow exceptionally long loads to be carried.

Premium touches
Body-coloured or chrome exterior door handles and body-coloured door mirrors (with LED indicators and kerb lights on all but entry-level versions) are other premium touches, and most models have new-style alloy wheels and surface-mounted roof rails. 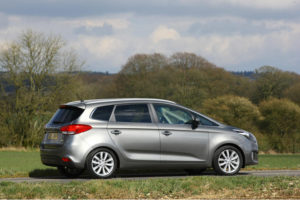 The new Carens maintains the leap in quality with every successive new model from Kia, thanks to the classy materials and sophisticated detailing. The standard cooled glove-box is supplemented by second-row under-floor storage, a centre console box, front and rear door pockets large enough to hold drinks bottles and front seat-back pockets. The front seat backs also have fold-up tables with cup-holders in most versions, and there are cup-holders in the second and third rows. The middle-row centre seat folds to create a table. This car is going to be a mess very soon if any of this capability is used.

You can choose from three engines – one petrol and two diesels. The petrol motor is a 1.6-litre with 133 bhp and claimed combined fuel economy of 44.1mpg. The two diesels are 1.7 litres with either 114 bhp or 134 bhp. The lesser powered one will give you 60.1 mpg, the other one 56.4 mpg, in theory at least. Stop-start is standard on manual-gearbox models. The more powerful diesel has a six speed automatic gearbox option.

Compatibility
The new Carens is available with three trim and equipment packages, badged ‘1’, ‘2’ and ‘3’. Standard features include LED daytime running lamps, air conditioning, front and rear power windows, cruise control with a speed limiter, remote central locking, and a six-speaker RDS radio/CD player with MP3 compatibility and Bluetooth with voice recognition and music streaming. Prices for the “1” start at £17,895 for the 1.6 litre petrol model. 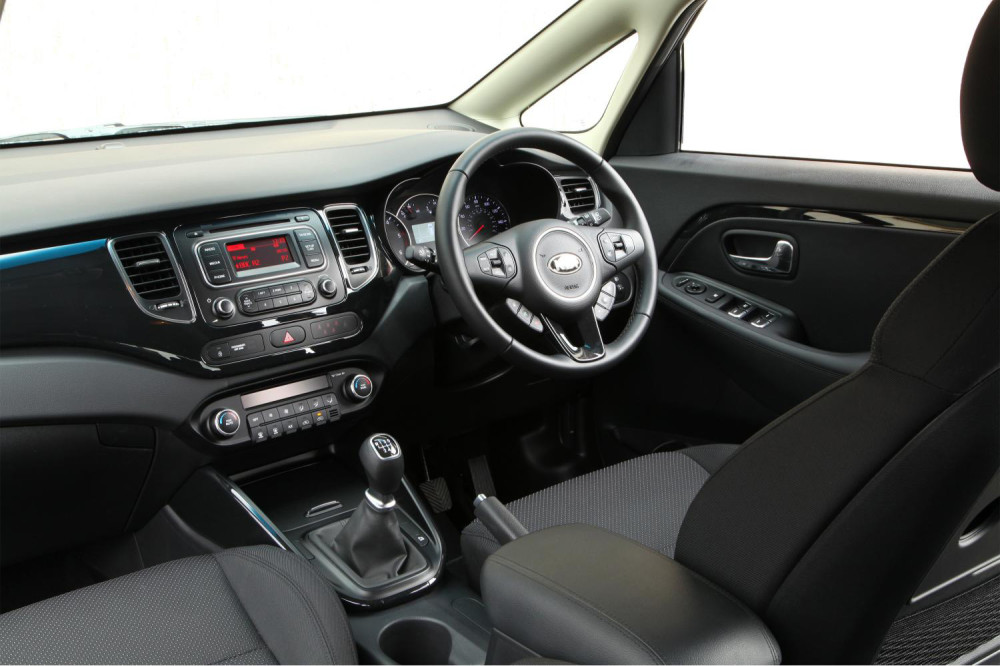 The top-grade ‘3’ versions are distinguished by 17-inch alloy wheels, a panoramic sunroof, leather, heated front seats and a reversing camera integrated into the centre fascia screen. The “3” 1.7 CRDi with 134 bhp diesel engine costs £23,895.

So there you have it. You might not want an MPV, but you know that given the necessities of family life, you will just have to grin and bear it. It might be some consolation that you might be spending close on 20 grand, but it seems that Kia has poured in so much content and thought of every need your little darlings may require, that you will end up feeling quite pleased with yourself.

Sorry, but as the sun is shining, I’m off to buy a Mazda MX5 convertible, or maybe I can stretch it to an Audi A3 or I series BMW ragtop.  Kathy and I can do without the seven seats, and boring practicalities. 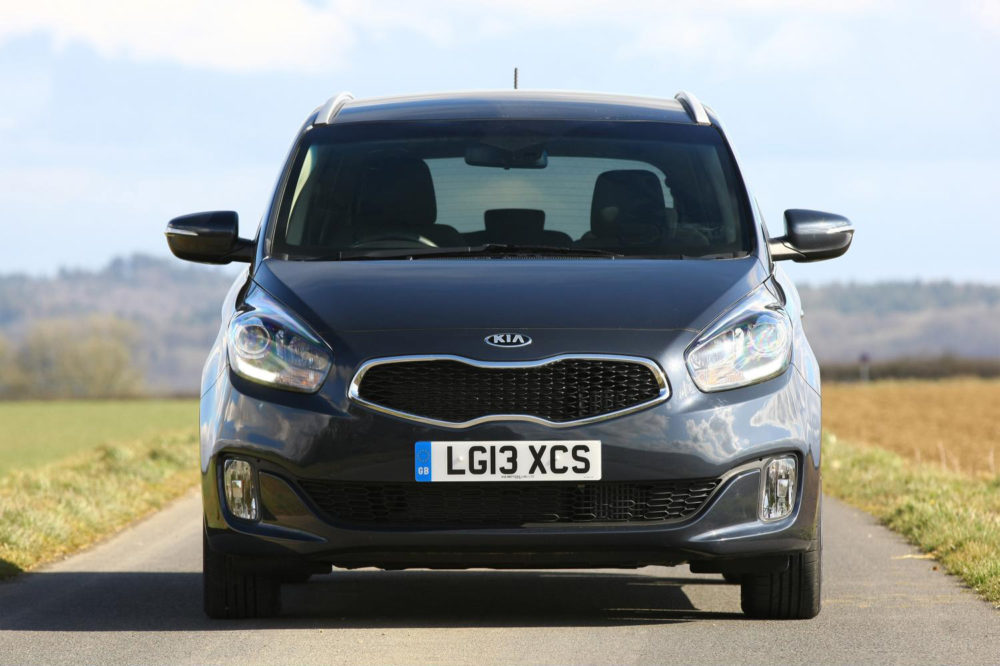 (Kia provided one night in an hotel)