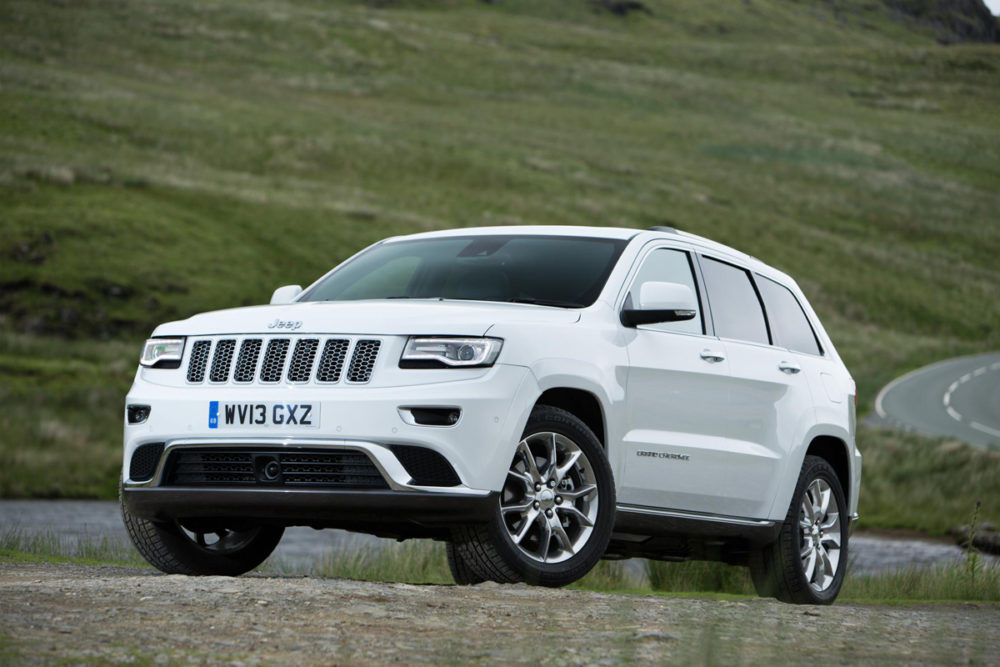 For – typical big SUV – serene ride, copious off-road ability if you should ever require it, well priced, loaded with gizmos.
Against – the diesel isn’t very economical.
rating **** £50,065

I’m a huge fan of big SUVs, and this one is big. The commanding driving position, and the feeling that you are sealed off from the hurly-burly world gives you a feeling of serenity as you ooze around country lanes or motorways. 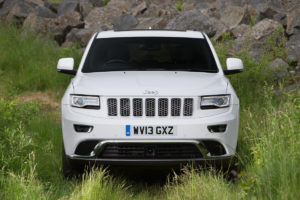 Prices start at around £37,000, which makes it very competitive in its class, although the model I drove, the Jeep Grand Cherokee 3.0 CRD 244 hp V6 Overland was very well equipped with a beautiful interior and cost just over £50,000. Still very competitive I would say, although residual values probably look bad against the German opposition.

The styling is very attractive, with only the Range Rover Sport rivaling it for good looks, in my opinion, amongst competitors like the BMW X5 and Audi Q7. The Grand Cherokee felt very nimble on the road, and it stayed nice and flat through fast corners with no urge to roll or dip. The steering was tight and accurate.

You won’t be surprised to hear that it was not very economical with fuel, even though this was the diesel version. Jeep claims it will average 37.7 mpg. In very favourable driving conditions – poodling along country lanes in top gear or doing about 70 mph in top gear on motorways, I only managed 27.9 mpg, that’s a shortfall of 26 per cent, pretty much standard for the difference between E.U claimed numbers and the real world. The car’s computer meanwhile claimed it was doing 29.3 mpg, an overstatement of about five percent. While filling it up, I found the new style safety filler cap very user friendly. 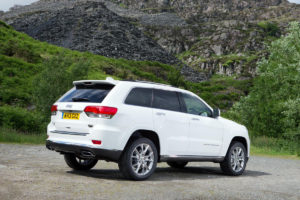 You can choose from two engines, three power outputs, and six trim levels. There’s the 244 hp 3.0-litre turbo diesel, a less powerful 185 hp version, or the SRT 6.4-litre V8 HEMI engine delivering 455 hp. They all come with a new eight-speed automatic transmission. Recently updated specifications include bi-xenon headlamps and LED daytime running lights. The Grand Cherokee is packed with technology which I never got the chance to master during our brief relationship. The four-wheel drive system is controlled by a little dial which will set the car up for snow, grass, mud and rocks. Again I didn’t venture off the regular roads, but in the past, Jeeps have been as good as the competition when conditions get nasty.

Impenetrable
There’s Adaptive Cruise Control, Forward Collision Warning with Crash Mitigation along with a bunch of other impenetrable acronyms to keep you safe. My car didn’t seem to have Stop Start though. Connectivity and sat nav are state of the art.

The Grand Cherokee is available in Laredo, Limited, Limited Plus, Overland and top of the range Summit trim. The keyless Enter ’n Go system is standard. This employs electronic sensors to detect the key’s presence. The car unlocks automatically and the engine starts by pushing a button without needing to insert a key. 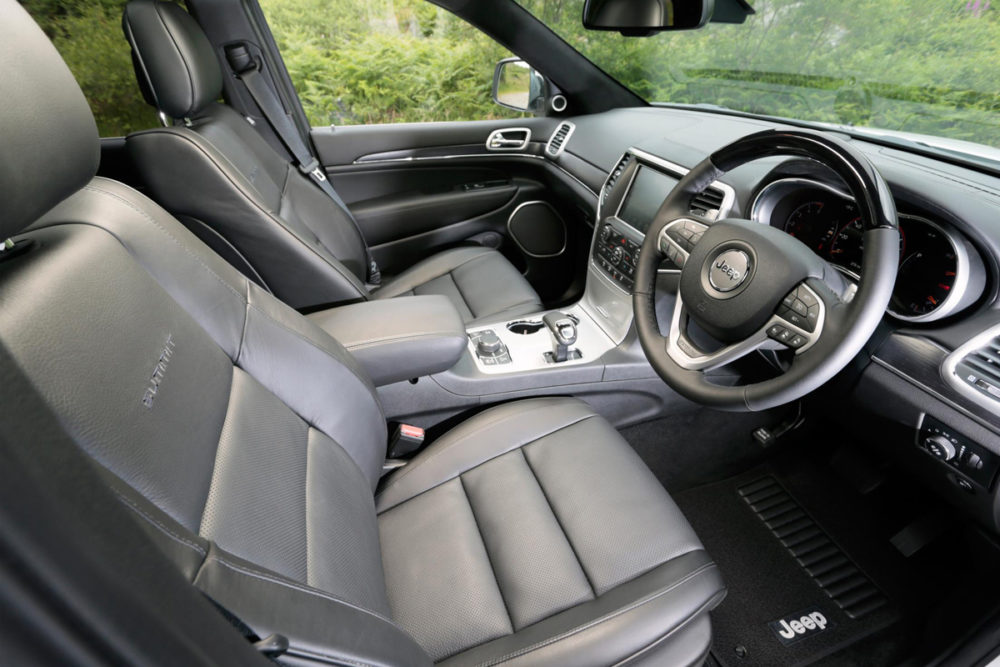 The Overland, Summit and SRT models include a panoramic sunroof as standard. This twin-panel powered contraption extends from the windscreen to the rear of the vehicle to give a full view of the sky. The front panel opens rearwards while the second panel is fixed. The system comes with a powered sun shade to shield occupants from direct sunlight.

In order to deliver on and off-road performance, an array of sophisticated systems are employed. The Quadra-Lift air suspension is standard on Overland and Summit versions. This features air springs on each corner to maximise ride comfort and permits the driver to adjust the vehicle’s ride height manually by up to 10cm using controls on the centre console.

Jeep has been setting new sales records as it gears up for an assault on Europe. This was boosted for a while by the weakness of the dollar, but that has now gone into reverse so times will get more difficult. Just in time, the little Renegade, made in Italy alongside the 500X, will hit showrooms soon. I hope to be getting behind the wheel of the Renegade soon. 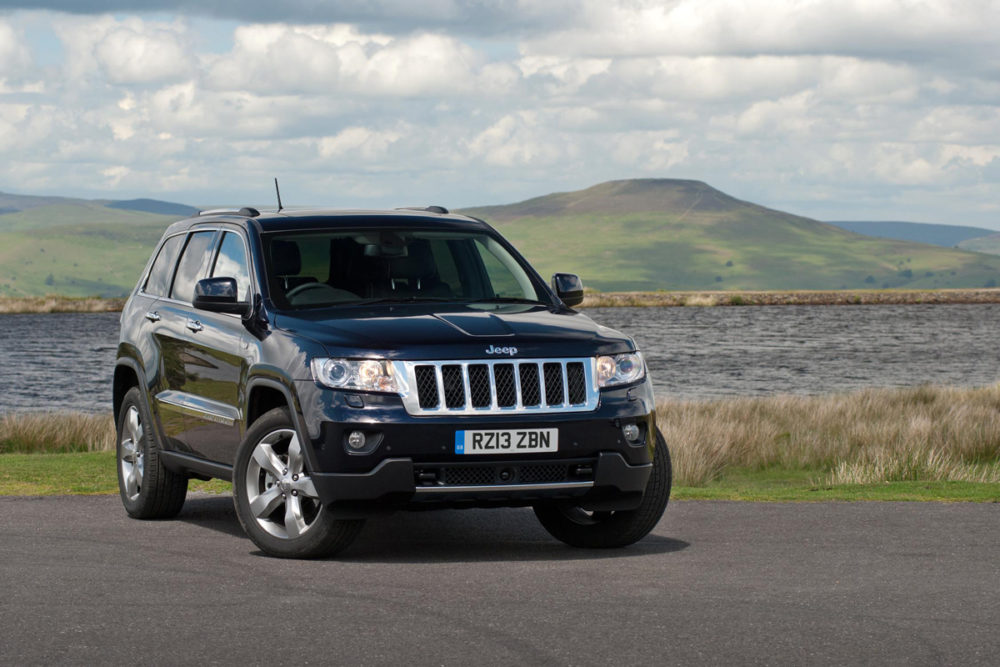